Sometimes you get to dive on a wreck which for some unaccountable reason proves to be irresistible. I say unaccountable, because quite often these wrecks are in shallow water and have little or no real goodies left on them. Even so for some reason or other you find yourself diving on then time and time again. One such wreck is that of the Andromeda, which became wrecked in a southwesterly gale on the 12th February 1915, off Killygerran Head near Portscatho, Cornwall. 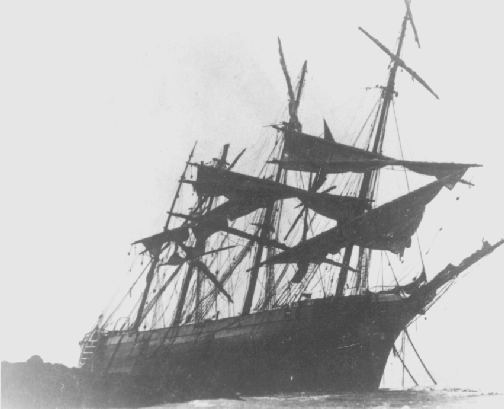 The wreck of the Andromeda.

Built in 1890 by Duncans of Port Glasgow, the Andromeda was a four masted barque of some 1762 registered tons. Commanded by Captain Deeks, the Andromeda had loaded 2500 tons of badly needed grain at Tacoma in Oregon, and had successfully run the gauntlet of enemy submarines when she arrived off Falmouth in the teeth of a blinding south westerly gale. Due to the wartime restrictions in force at the time, Captain Deeks was not allowed to take the Andromeda straight into Falmouth harbour but had to wait for a Pilot. Unfortunately, because of the heavy weather none of the Pilot boats could get out to the Andromeda, who in any event was finding it extremely difficult to weather St Anthony’s Point. At the time Captain Deeks was still very worried about enemy submarines, because the night before when he was off the Scillies the skipper of a merchantman had warned him to keep a good lookout as submarines had recently been seen in that area.

By four o’clock the next morning however, Captain Deeks realised that the submarines were to be the least of his troubles as the gale was rapidly pushing his ship towards the Cornish shore. After ordering the two lifeboats to be made ready, Deeks then dropped both ships anchors. All the crew put on their lifejackets, but unknown to them all, one of their number a seaman called McDonald, was already missing after being washed overboard whilst attending to one of the lifeboats. As the huge seas pounded the Andromeda it became apparent that the anchors were dragging and all on board realised that they were going to hit the rocks. Captain Deeks had his wife and ten year old daughter to worry about as well as his ship and the crew, but because the sea was so ferocious nobody fancied trying to launch the lifeboats. As the Andromeda rushed towards the storm tossed rocks, everybody braced themselves for the shock as she collided. It must have been a heart stopping moment, but happily none of the masts fell down and although a lot of water was washing over the decks the Andromeda did not seem in imminent danger of breaking up.

An apprentice called Reginald Hockeridge started to try and free one of the lifeboats, when first one davit and then the other fell away and he and the boat were flung into the water. The hapless apprentice and the boat were quickly swept onto the rocks where the boat overturned on top of him. He remained trapped in this fashion until another wave lifted the boat from him and he managed to scramble up the rocks to safety.

Meanwhile on board the Andromeda everyone had clambered up the rigging and secured themselves so comfortably that the Captains young daughter promptly fell asleep on the knee of one of the sailors. She obviously had a lot of faith in her Dad and it was not to be misplaced, because at the subsequent inquiry Captain Deeks was praised by all for his competence and efficiency. When the sun finally arose on the following morning the local rocket brigade arrived to effect the crews rescue together with the local Territorials who rigged up a breeches buoy. Everyone was taken off safely, but for the Andromeda the end had come. Later that year stranded and forlorn, she was auctioned for ?70, not much even in those days, and broken up where she lay.

Today her remains lie very close inshore rammed into the large rocks at the bottom of Killygerran Head. The depth of water over the wreck ranges from fifteen to thirty feet, with the wreck lying upright on a sand and rock covered bottom. On a shallow site like this you obviously gets plenty of kelp, but it is not too intrusive and anyway cannot disguise the outline of the wreck. The Andromeda’s ribs and carcass are almost perfectly laid out and it is one of the most picturesque wreck sites that I have ever dived on. The wreckage is strewn over a very large area so there is not much chance of you missing it, and there are some quite large pieces, including some hull ribs, which stick up almost twelve feet.

Close by are what looks like part of a mast leaning on some rocks together with its step (or tabernacle) crammed into a cleft in the rocks almost on the shoreline. The wreck is supposed to be well dived, so much so that I had to persuade some of my companions to go there in the first place. “There’s nothing left” they moaned “too many people go there”. Well the first pair in (not me I am ashamed to say) found a gunmetal deadlight, and another pair found a very nice brass valve but couldn’t get it off, so far as I know it is still there. For the rest of the time you can just browse amongst the wreckage fitting all the bits together in your mind, and look at the beautifully coloured wrasse that wander in and out of the wrecks carcass. Some of the larger pieces of wreckage lie very close inshore jammed into huge rocky reveals. The water can get very turbulent this close in, even on a calm day, and it is easy to get bashed about on the rocks.

Incidentally don’t go wandering off into any of the large caves in this area because quite huge seals inhabit some of them. They might be playful but they don’t seem to like uninvited callers all that much. That day I did three dives on the Andromeda and I wished that it could have been more. Why? Well it is a very good dive, I cannot say more than that, can I.