At the western end of the Lizard lie Kynance sands and the sheer cliffs which form the outer edge of Mount’s Bay. Exposed to all the terrible storms that plague this area these cliffs offer no shelter at all and after Gunwhalloe they give way to the notorious Loe Bar, a great bank of sand that separates the estuary of Helston’s river Cober from the sea. This six-mile stretch of sea from Rill Head to Porthleven is the deadliest of all lee shores, and any vessel that failed to weather the Lizard was almost certainly going to become a wreck. 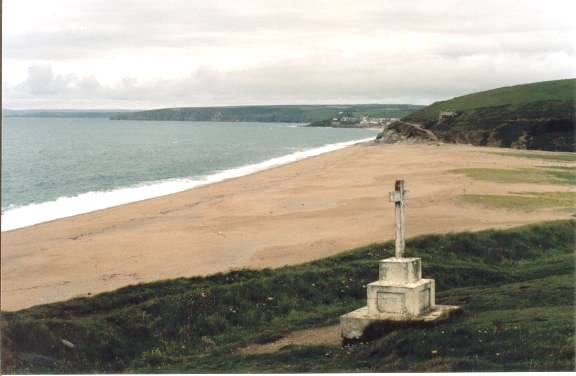 The list goes on and on but of all of the tragic wrecks that came to grief on Loe bar, by far the most famous is that of the frigate H.M.S.Anson a 44 gun-fifth- rate commanded by Captain Charles Lydiard. On Christmas Eve 1807 the Anson left Falmouth to take up her station on the navy blockade that was keeping the French bottled up in Brest. It was blowing hard as the Anson made her way down channel, and when Captain Lydiard finally sighted Ushant the storm was so bad that he decided to put about and return to Falmouth. On the afternoon of December 28th the Anson was well to leeward of the Lizard and being a cut down third-rate she was not a good sailboat and the Capt. Realised that he was in big trouble. 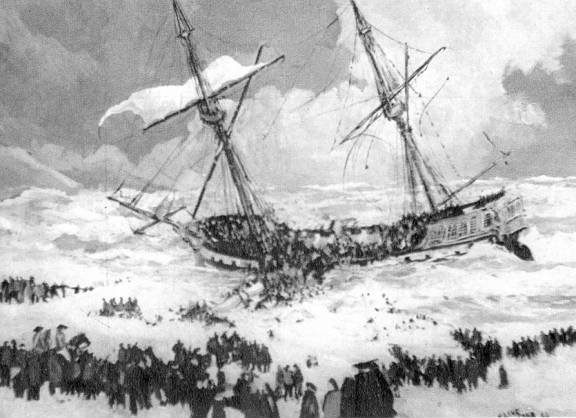 The wreck of the frigate Anson on Loe Bar.

All attempts to clear the land failed and the ship rushed down towards Loe bar. Captain Lydiard ordered the topgallants struck to take some of the way of the ship and then released his biggest anchor. It held, the ship pulled around, and rode quite comfortably. The crew breathed a collective sigh of relief, but it was to be short lived. At 5am. On the 29th the anchor cable parted and although another was immediately dropped it only lasted a couple of hours and then it too parted. Seeing that there was nothing else to do Capt. Lydiard ordered the helmsman to steer the boat full tilt at the beach. The Anson got quite close in and then broached too. Luckily its mast fell down and made a makeshift bridge to the shore over which several of the crew managed to scramble to safety, whilst others were pulled ashore by willing helpers from the nearby villages. Even so over 120 men were lost including that of captain Lydiard who was swept away whilst trying to save a young boy seaman. 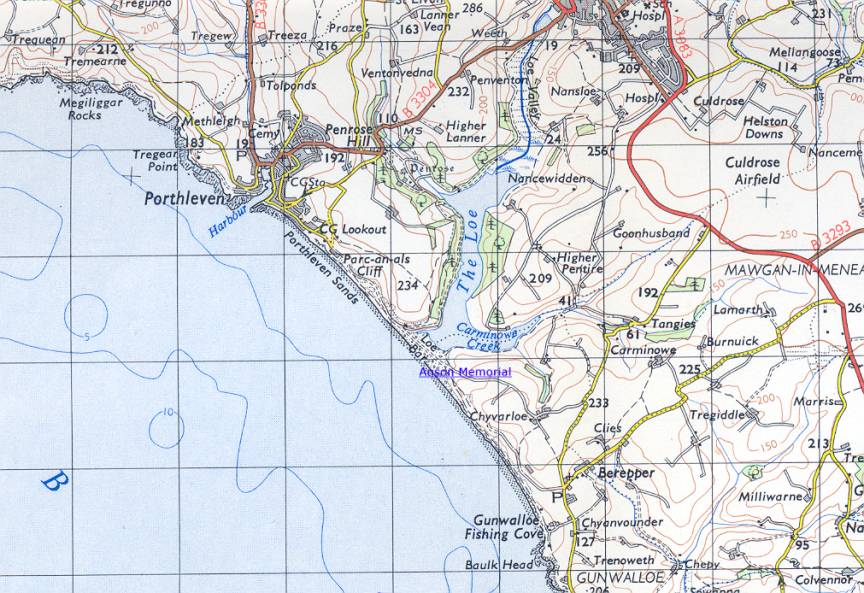 The bodies that were recovered from the wreck of the Anson were buried in the cliffs and beaches around the wreck site. This was common practise at the time, and there must be thousands of these unmarked graves scattered all over the West Country. Ironically it was just a year after the Anson tragedy, in July 1808, that an Act of Parliament was passed requiring that all such bodies be given a Christian burial. 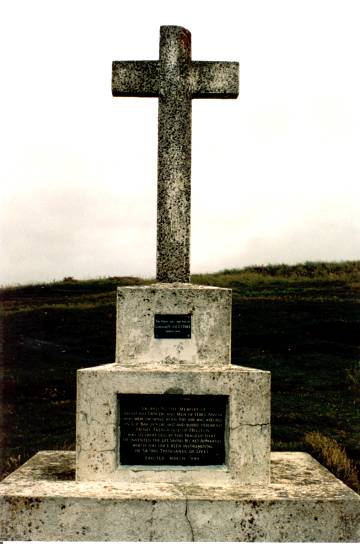 The memorial to the dead of the Anson was erected in 1949 and is very easy to find. You can approach from Porthleven and walk across the sands at low tide, but it’s a pretty hard walk and you have to watch out for the tide coming back in. An easier way is to drive to Chyvarloe and then walk about a mile and a quarter along the top of the cliffs. It is a very scenic walk and ends up with a terrific view of the Loe Bar. If you go in rough weather you will easily understand why the crew had so little chance of escape, and the fury of the waves will astound you. 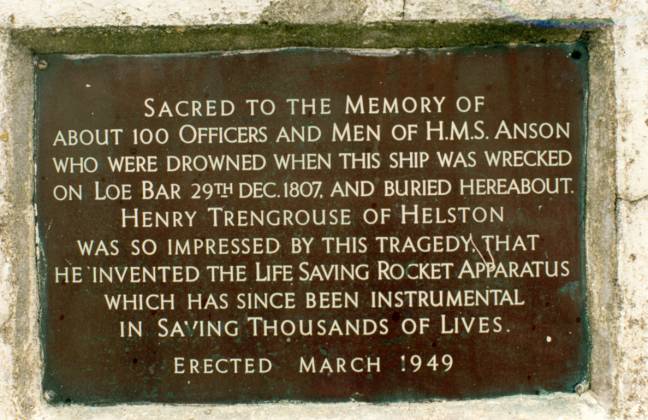 If you want to see one of the cannons, go to the nearby town of Helston (famous for the Floral Dance) The cannon, a thirty two pounder weighing three and a half tons can be found outside the town’s museum, and was recovered from Loe bar by divers from the air station at Culdrose. 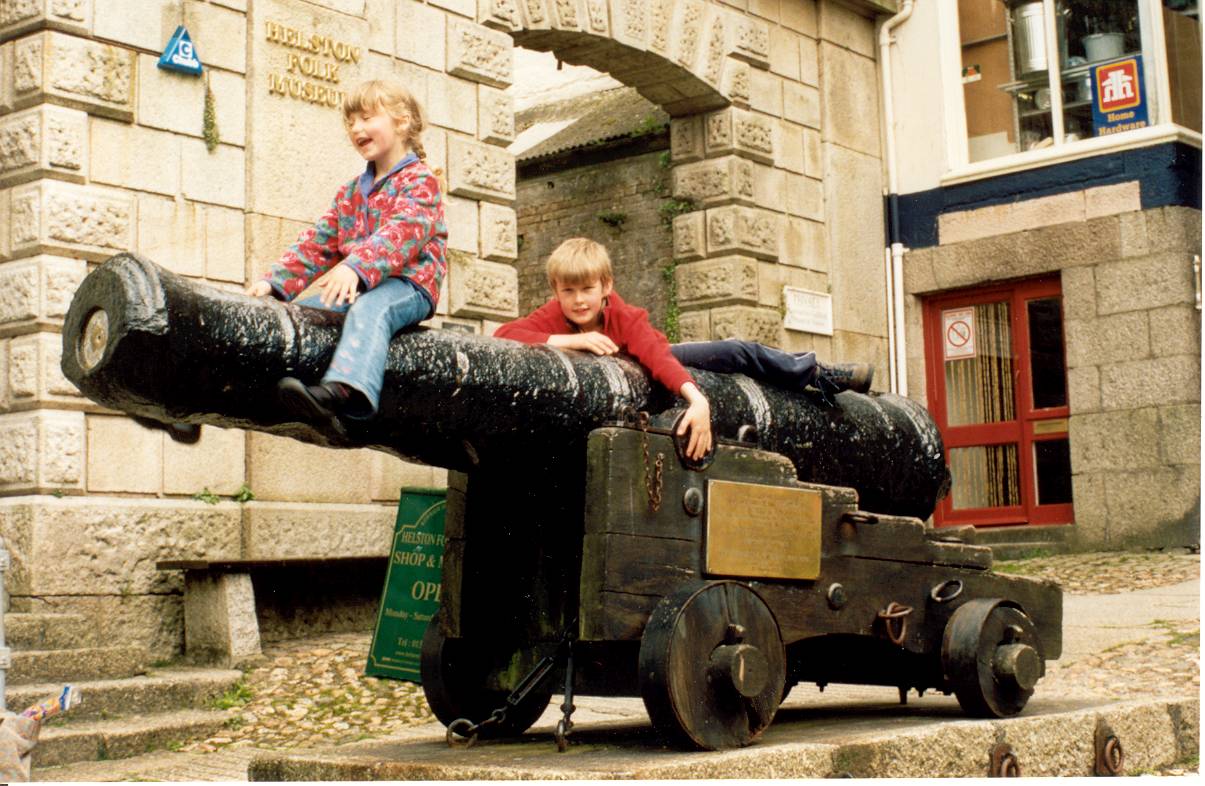 The only good thing to come out of the Anson Disaster was the invention of the Rocket Firing Apparatus. Amongst the people who witnessed the wrecking of the Anson was a Helston man called Henry Trengrouse. He saw some of the sailors drown yards from safety, and was so appalled by the battered and disfigured corpses that were strewn around the beach that he determined that he must try to figure out a way of stopping it ever happening again. Surely, he thought, there must be some way of rescuing people caught up in these terrible circumstances. The device he came up with was a musket fired rocket line which became the fore runner of the modern day rocket line that has saved thousands of lives over the intervening years, and is still in use to this day.