In July 1977, these two derelict tankers were under tow by the small Japanese tug the Kiyo Maru 2, on their way from Greece to the scrapyards in the Far East. The tug made an unscheduled stop in Abijan ( North Africa ) because of some minor engine trouble, but all then went well untill the convoy approached Table Bay in the teeth of a North Westerly gale. The Port Captain at Cape Town advised them not to enter Table Bay as he thought the weather was worsening and he was worried that the two tankers would not have enough sea room. 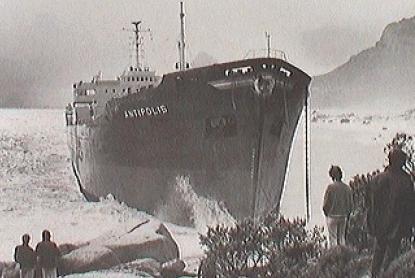 The wreck of the Antipolis.

Durring the afternoon, as the tug approached Robben Island with the gale now blowing harder than ever, the rope between the Antipolis and the tug snagged on the sea bed. All attempts to free it failed, and whilst the crew was busy with that task, the Romelia surged ahead of the tug taking its tow rope underneath the tugs hull.

Fearing for his props, the Tug Master could only watch in horror as the Antipolis finally broke her tow rope and became cast adrift. Meanwhile the tug was still firmly anchored to the bottom and the Captain had to order the crew to cut through the towing hawser with a gas torch so as to release his tug. 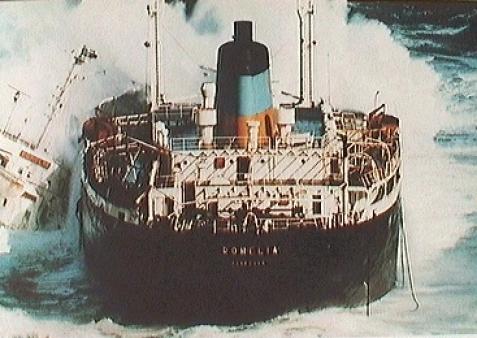 The Romelia aground with the tug alongside.

Whilst all this was going on, the Romelia then parted her tow rope and happily sped towards the waiting shore. The Antipolis ended up driven ashore by fifty knot winds at Oudekraal on the Cape Peninsula, and the Romelia was cast ashore on Sunset Rocks, in the pretty Llandudno Bay a few hundred yards away.She finally broke her back and sunk in two halves.

Today the skeleton of the Antipolis can still be clearly seen at low tide and has become a very popular shore dive.The Romelia broke up quite a bit more ,but even now you can see her rusting stern section silhouetted against the skyline still held fast on Sunset Rocks.

Directions to the Wreck 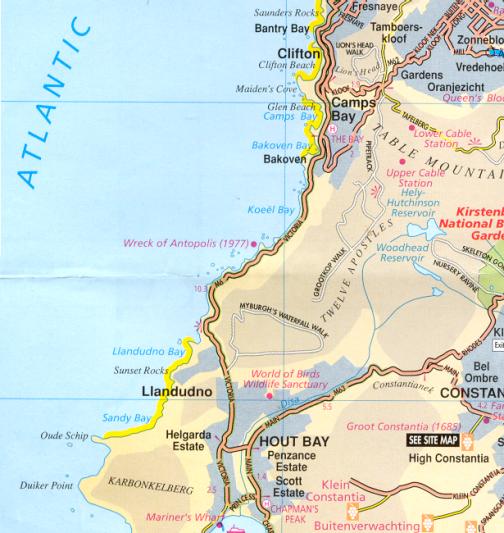 Drive out of Cape Town towards Hout Bay along the coastal, Victoria highway (M6). It is a stunning drive past the pretty beaches of Clifton and Camps Bay.

Mid way between Bakoven and Llandudno is Oudekraal where there is a large lay by, with an information plaque telling you that it is here that the wreck of the Antipolis lies. At the week end there are scores of cars containing divers and their equipiment, because the wreck is a very popular shore dive. 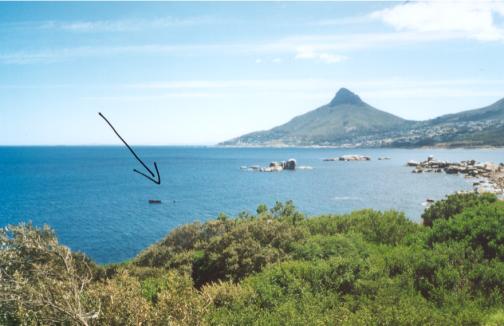 You can see the remains of the wreck quite clearly, its bow ribs are almost on the shore, and a bit further out, a boiler shows at low tide. 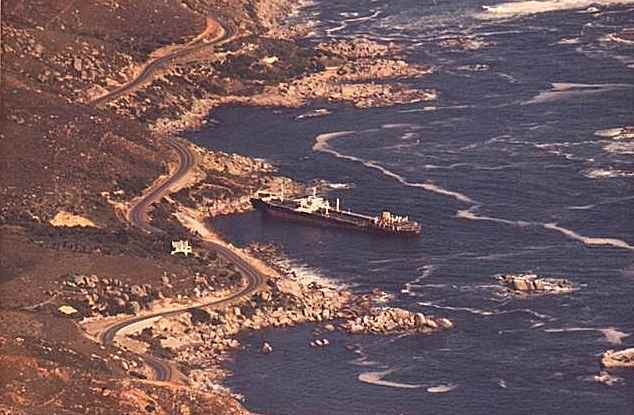 Another view from the top of Table Mountain taken in 1978 by Stan Cooke.

Just a little further along is the beautiful village of Llandudno nestling in its own tiny bay. it is a very steep drive down, and if you want to see the sunset over Sunset rocks, then the lay by just at the top gives a superb view. The stern of the Romelia is just visible at low tide. But it is the wonderful red glow on the rocks that really takes the eye. 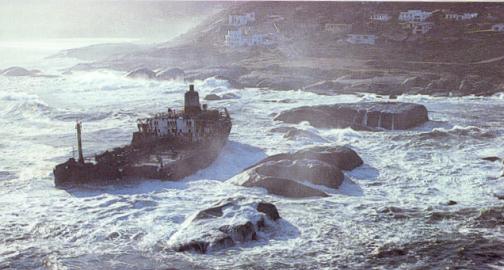 After the sunset, go back to Camps Bay and have a smashing fish meal in one of the many lively bars or restaurants, and watch the last of the sun sparking off Table Mountain.

A great day out.