I have put this ship here because it was the ultimate reason for Operation Hailstorm, and because many divers going to Truk, feel that it is right that they should visit Pearl Harbour and see this memorial for themselves. Most find that it is an extremely moving experience, and well worth the effort. 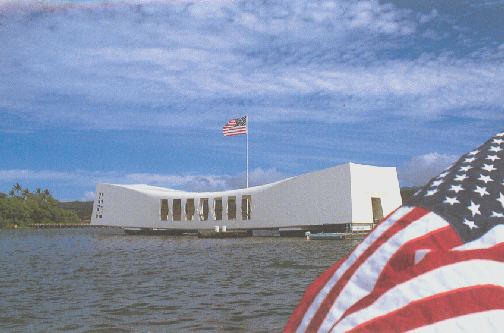 I don’t know about you, but I was never very good at learning history dates at school. Some of course are easy because they refer to some great national event. I066 for instance is, as everybody knows, the date of the Battle of Hastings, and the 4th of July is the American Day of Independence. Easy so far? well what about Dec 7th I94I? It does not mean a lot over here, but if you ask any American he will come right back with Pearl Harbor and the ‘ Day of Infamy’. It was on that date that the Japanese launched an air strike that completely destroyed the American Pacific Fleet and finally brought America into the Second World War. one of the first ships to be sunk was the U.S.S. Arizona, a thirty two thousand ton Battleship. she was hit by an Armour piercing bomb, which landed near her forward turrets, and penetrated down five decks starting a massive fire which soon spread to the forward magazines. Nearly two million pounds of ammunition was stored there, and when it detonated it was with all the force of a one-kilo ton nuclear bomb. 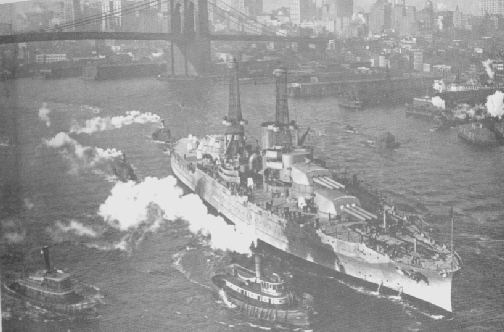 The U.S.S.Arizona sails down the East river, on her way to sea.

The explosion pealed back the main deck like a banana skin and hurled bits of the Arizona all over the Harbor. As her fuel oil poured out of her ruptured hull it ignited and burned so furiously that it took two days to burn out, and left the hull so hot that it was three days before anybody could set foot on what was left of the vessel. Within nine minutes of the bomb striking, the Arizona had sunk in an upright position, with only her masts and superstructure left forlornly poking above the water. Of the fourteen hundred and forty six crew, all but two hundred and sixty nine were engulfed in the cataclysmic explosion, many being trapped below deck, only the huge billowing mass of smoke from the burning Arizona marked their passing, and this soon joined with the smoke and fire from all the other burning ships until it seemed, from the air, that all of Hawaii had disappeared under an enormous black cloud. 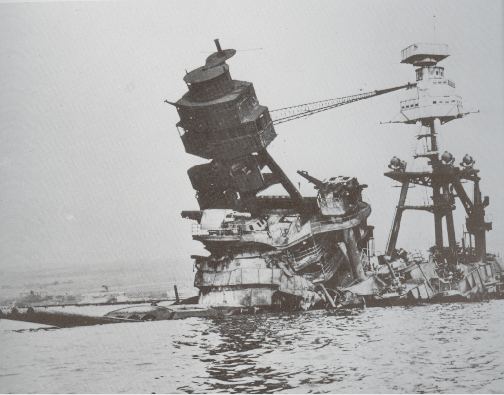 In the aftermath only one hundred and five of the dead were recovered, and with America now up to her neck in the war , salvage teams were urgently needed elsewhere. Everything above the water was removed, and the Arizona, still with eleven hundred of her crew entombed, was left to her watery grave. The Navy however did not forget her completely, and soon she became the unofficial memorial to that terrible tragedy. As warships passed the wreck they would fire salutes and dip their flags, and their crews would silently remember their dead comrades. After the war, in 1950, the Arizona was put back on the active list ( rather like our H.M.S. Victory ) and a small wooden platform with a flagpole was erected so that she could fly the stars and stripes. 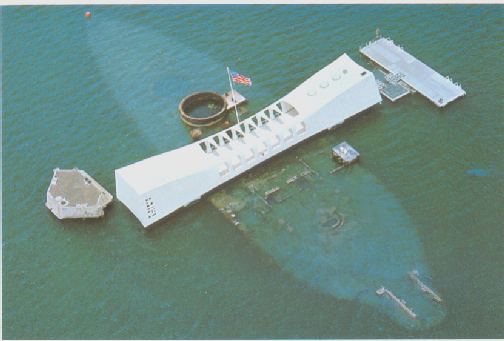 The Arizona memorial rests over the hull of the sunken battleship.

With tourism to Hawaii increasing, many more people became interested in the Arizona, and in 1962 the striking white concrete structure you see today was erected, and the whole wreck dedicated, not only to the crew of the Arizona, but to all the men that died in the attack on Pearl Harbor. By I980 the Arizona was attracting over a million visitors a year and the Navy, swamped by all these civilians, decided to give up the task and pass over the administration of the memorial and the new multi million dollar visitor’s complex to the National Parks Service. The Parks Service soon realized how little was actually known about the Arizona, and they spent a lot of time and effort tracking down survivors and interviewing them, as well as gathering all the information they could on the building and operation of the Arizona ( she was well over twenty five years old when she was sunk ) so that they could give accurate answers to the many questions asked by the visitors. When this task had been accomplished, they then turned to the wreck itself, and discovered to their horror that in the three years since they took it over substantial decay was already evident in the pieces of superstructure that they could see. 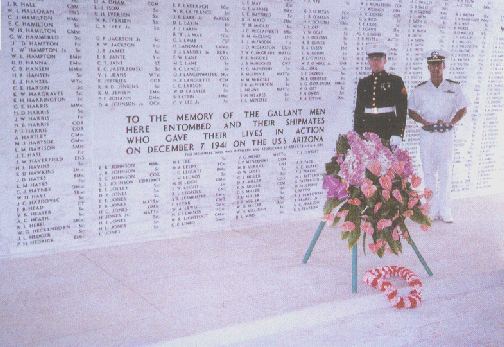 The roll call of all those brave souls lost.

Three large ventilators for instance had collapsed just from corrosion, and the Arizona itself had settled by almost a foot since her sinking. Since the concrete memorial was over twenty years old, any further settlement could be disastrous, so the Parks Department decided on a full underwater archaeolog- ical survey. Since this would in effect take some years they decided to carry out a preliminary survey to set the data parameters. Visibility in Pearl Harbor is only about seven feet at the best of times, and at first the divers had great difficulty orientating them on the wreck. Some of the gun turrets had already been removed, and with the deck plating all peeled back, and great lumps of corral sticking out all over, things were a bit confusing to start with. Soon however the divers got their bearings and the survey ‘ proper’ got under way. 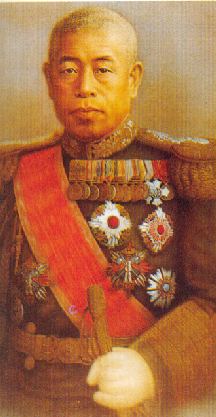 Admiral Isoroku Yamamoto,architect of the Japanese victory at Pearl Harbor.

The bows and about twenty feet of the hull are still intact, but where the explosion took place in the forward magazine, the hull had splayed right out and a fourteen inch gun turret had collapsed downwards, ending up almost thirty feet below where it should have been. About halfway down her length the Arizona started to look more like a ‘normal’ ship and less like a scrap yard. Her stern is virtually intact except for her turrets which were removed in the original salvage. Here also were plenty of portholes, most still with their glass intact. where deadlights had been secured, air was still trapped between the glass and the steel lids. The divers were not allowed to penetrate the hull because it is still very much considered as a war grave, and for this reason also, no artifacts were brought up.

However looking through the portholes gave the divers some fascinating insights into those last terrifying moments. Machine gun ammunition is scattered all over the deck, a hose reel neatly laid out only minutes before the bomb detonated, and maybe most poignant of all, in the galley, scattered on the floor, the broken crockery of that final breakfast. All the divers found the experience very moving. It seemed to them so right that the Arizona should be left in peace to guard the bodies of its once proud crew For the millions of Americans who come to visit her, the Arizona is far from being an inanimate lump of scrap, just another war memorial. For them she has become a symbol of pride in their country, and of their hope for a future that will exclude disasters like the Arizona and the war that caused it.