The Arniston, a British East Indiaman, was owned by Borradailes of London, and had made eight successful voyages to China and India. In 1813 she was requisitioned by the Admiralty for service as a troopship.The Arniston had been built in 1794 at the barnard Yard on the Thames, and was the equivalent of a Royal Navy fourth rate ship of the line and carried fifty eight guns. 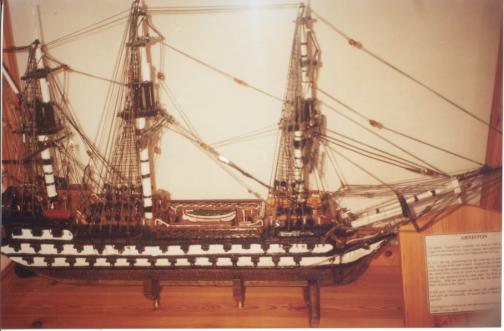 Model of Arniston in Hotel.

On her fateful voyage she was homeward bound from Celon under the command of Captain George Simpson. Among her 378 passengers were 14 women, 25 children, Lord and Lady Molesworth, and many invalid soldiers and sailors returning from India. 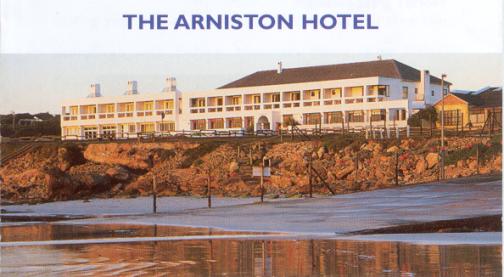 The Arniston sailed at the beginning of April in company with six other Indiamen and an escort of H.M.S. Africaine. About the 26th of May she parted company with the convoy because most of her sails had been blown away due to bad weather. However three days later land was sighted a very long way off, and Captain Simpson unfortunately mistook it for Table Bay. Actually he was off the Agullas.The Arniston tried to beat against the wind and strong currents that were dragging her towards the land, but soon the breakers were plain to see crashing on a hostile shore. 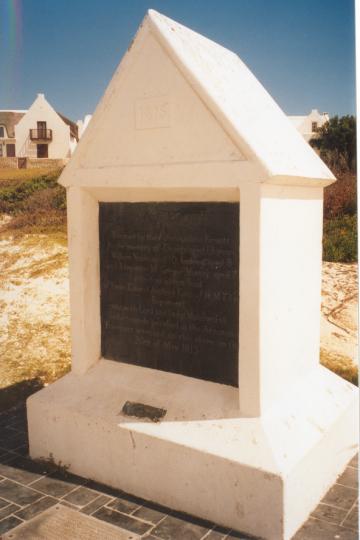 All attempts to get some sea room failed and in the end three anchors were dropped to try and stem the ships onward rush. Two of the cables parted almost immediately, and the situation became so desperate that the Captain decided that his only hope of saving any lives was to try and run the ship ashore before night fell. 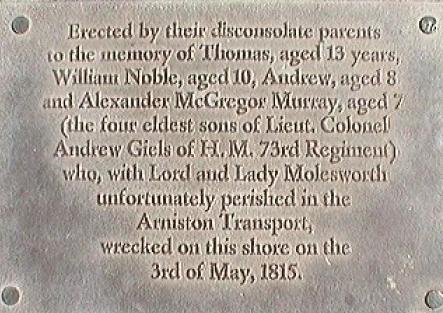 The sad text on the memorial, says it all.

He cut the last remaining anchor warp and the ship hurtled towards the waiting Agullas Reef, where it struck with incredible force and immediately started to break up, and was a total wreck by midnight. 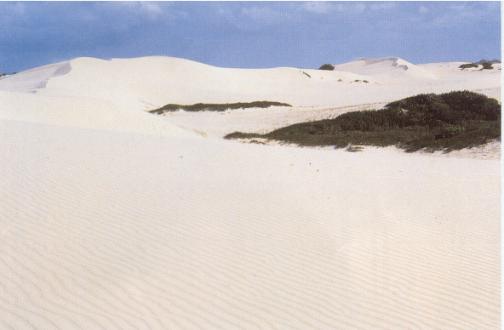 The beach where the survivors staggered ashore.

Only six men survived survived the disaster by clinging to planks of wood which were washed ashore in the huge surf. 350 poor souls perished, their bodies being thrown upon the beach the next day along side the smashed up wreckage of the Arniston. The six survivors, still convinced that they were near Table Bay, set of along the beach. Four days later they realized their mistake and staggered back along the beach and returned to the scene of the shipwreck. They managed to stay alive by eating shellfish and salvaging what they could from the ships supplies that by now littered the shore. On June 14th they were discovered by a farmers son who took them to his fathers farm where they were looked after and rested before finally continuing on to Cape Town. 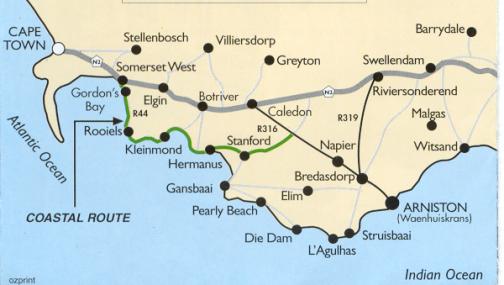 Arniston was originally called Waenhuiskrans, (Waggon house cliff ) but changed its name after the wrecking, as it attracted so many visitors.

It is a very small village, but set in beautiful coastal location. The Arniston Hotel is right on the front and well worth a visit, as it is very comfortable and welcoming. The memorial is set on a bluff about one hundred yards from the hotel, so its very easy to find.

Inside the Hotel is a fine model of the Arniston and a large amount of information, including some small items salvaged from the wreck.