The Birkenhead was an iron paddle steamer of 1400 tons, and was launched in December 1845. She was intended to be a warship for the Royal Navy, but later a poop deck was added and she was converted to a troop carrier capable of carrying five hundred men with all their equipment. 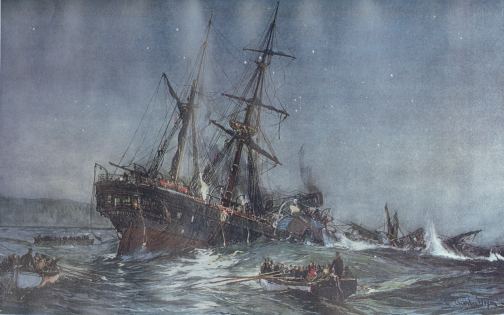 The tragic loss of the Birkenhead.

On a stormy day in January 1852, she left Cork in Southern Ireland to convey troop reinforcements to the Cape. At the time, England was engaged in the Kaffir War in South Africa, which had become a major drain on the British Army’s resources. In addition to the troops there were thirty one children, twenty five women, one hundred and twenty five crew, and various military and Naval Officers, in all making a total of six hundred and ninety three personnel. There was also supposed to be a shipment of gold valued at a quarter of a million pounds, which was to be used as payment for the troops serving in South Africa. 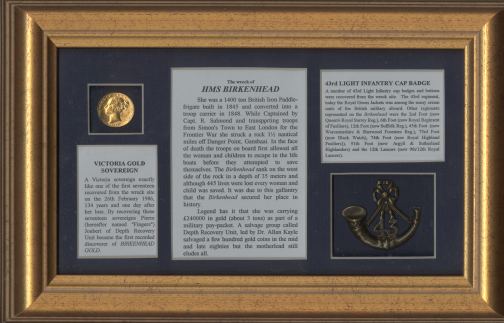 The Birkenhead made an uneventful passage to Simonstown where she took on fresh supplies of water, food, coal and also loaded aboard horses for the Army officers. On February 25th, with her decks crowded with horses and bales of hay, the Birkenhead sailed for her final destination of Port Elizabeth. She was making good progress in calm weather, when in the early morning, she suddenly shuddered to a halt with a terrifying crash. The Birkenhead had become hopelessly impaled on an uncharted rock. Twenty feet either way and she would have been safe, but now her hull was ripped open just behind the foremast, opening up her engine room to the sea and exposing her forpeak. 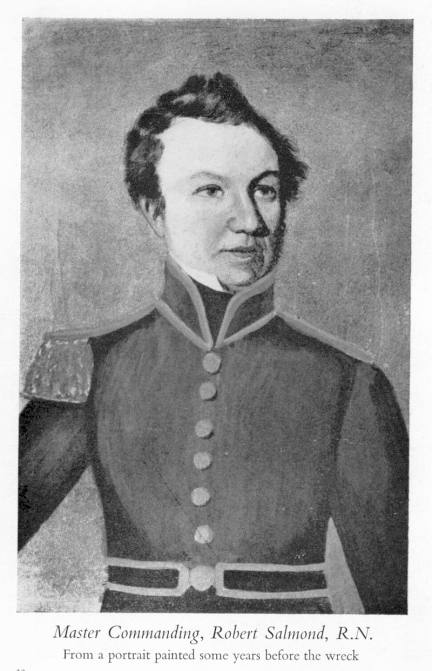 Many of the soldiers in the lower troop deck were drowned while they slept. As confusion reigned throughout the ship, its master, Captain Salmond, made what turned out to be a fatal error. Under the impression that his ship was about to break up on the rocks, he gave the order to go astern. The ship was torn right open, and water flooded in in torrents. As the Birkenhead writhed in her death throes it became obvious that the ship would have to be abandoned. The horses were blindfolded and pushed into the sea, where they were immediately attacked by swarms of sharks which hacked the poor horses to bits. Of the eight lifeboats on board only three could be lowered successfully , and soon two soldiers were assisting the women and children into the boats. Lt. Colonel Seton stood with his sword drawn in case any of the troops tried to rush the boats. His stance was completely un- necessary as not one of the soldiers or sailors attempted to get into the boats aside from those ordered to man the lifeboats oars. 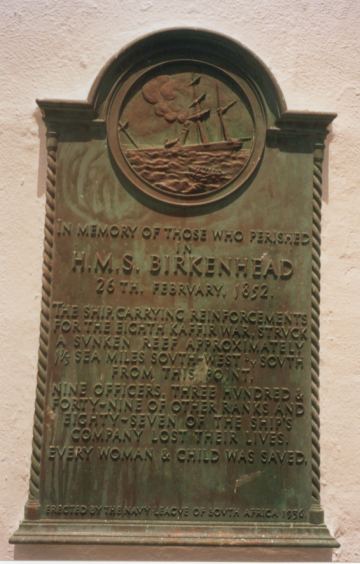 As the ship continued to sink, many of the troops manned the pumps to try and slow the inrush of water, while the rest , under Lt. Colonel Seton’s command stood quietly on the deck. Captain Salmond climbed up what was left of the mast and implored the rest of the troops to ” save themselves as it was their only hope of salvation". 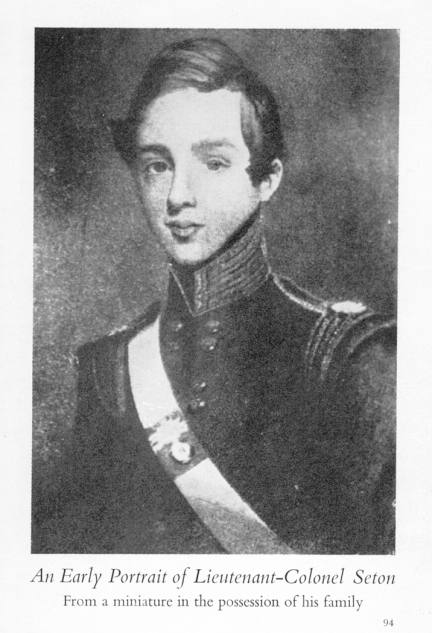 Lt. Colonel Seton stood before his men and begged them to stand fast as any attempt to save themselves would only mean certain death for the women and children. The ranks of troops stood fast. Not one man tried to save himself. As if on cue the Birkenhead gave an almighty shudder, and then the sea started to wash right over the deck. Still the soldiers and sailors stood firm, heads held high, as they prepared themselves to make their final sacrifice. Throughout this tragic event the courage and self discipline that these men showed was to be forever recorded in history, and became known as the Birkenhead Drill. 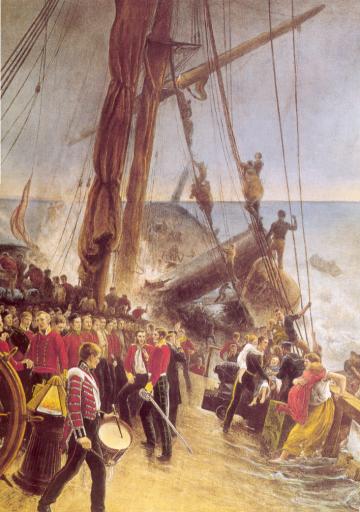 In the end it took just twenty minutes for the Birkenhead to sink, leaving just the mast to mark her passing. The sea around the ship was littered with debris, and the bodies of those that had jumped into the water as the ship sank, were now calling out to the three lifeboats that had managed to stay afloat. Since these were crammed full of women and children there was nothing they could do but pull slowly for the shore surrounded by pieces of flesh and parts of limbs, all that remained of the sharks terrifying work. 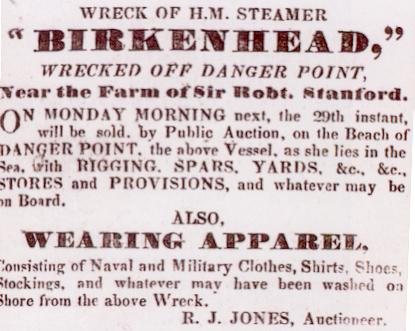 Towards noon the following day , the schooner Lioness picked up the survivors in two of the boats in addition to at least forty men that she had found earlier still clinging to the Birkenhead’s mast. In all she managed to save one hundred and sixteen men, women, and children. Sixty eight men survived by hanging on grimly to the ships wreckage and were washed up on the beach, and the third lifeboat managed to round Cape Hangklip and finally beached at the mouth of the Bot River where they were given food and shelter by some local fishermen.

Out of the six hundred and ninety three people on board, four hundred and thirty eight lost their lives. 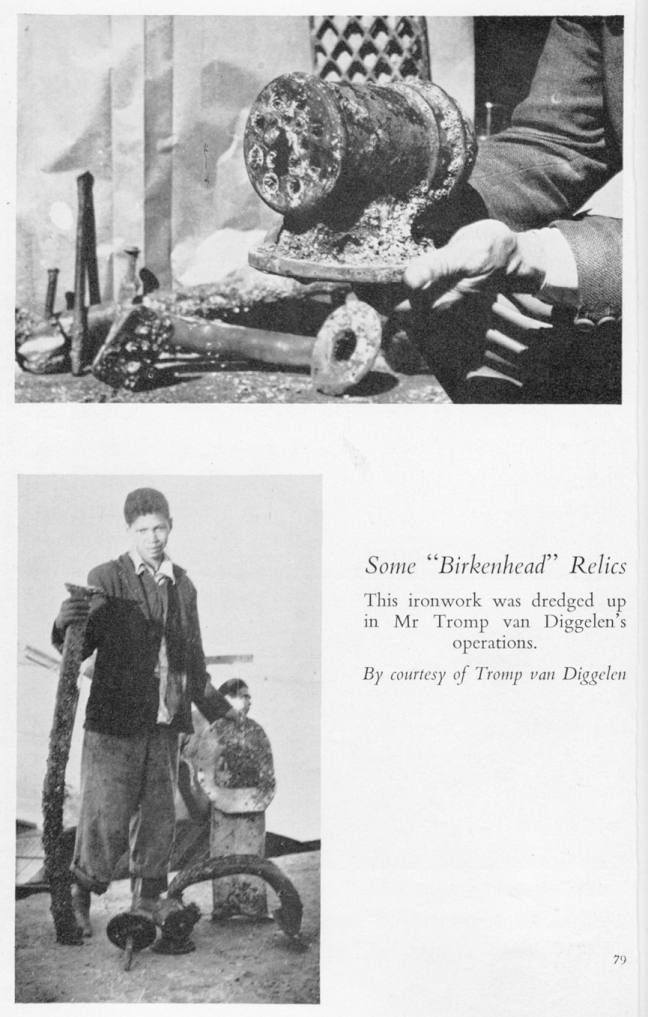 So what of the gold? Well there is still some dispute as to wheather she was carrying any at all. In any event the wreck lies in only thirty feet of water and there has been numerous attemps to find it. So far nobody is admitting to finding any. 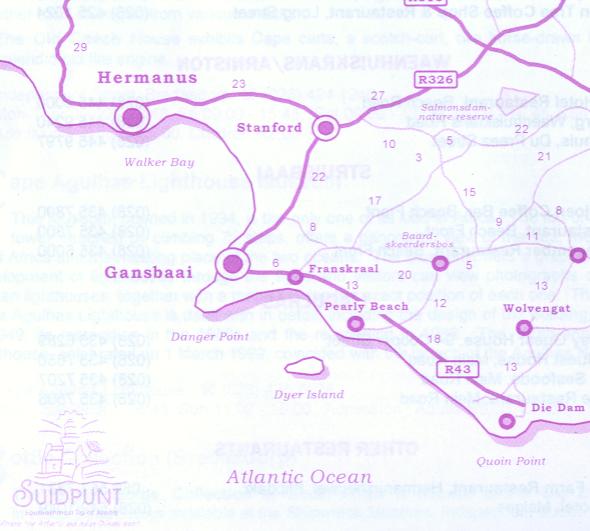 The easiest way to find the Birkenhead is to drive to Gansbaai, then take the dirt road marked Danger Point. It can be a bit of a bumpy ride and if there is somebody in front of you it is like driving in a dust storm.

The road eventually ends at the Lighthouse which has the memorial plaque on it. On the point itself is a stone information notice with a groove on it. Line this groove up with the notch in the rocks as directed by the board and you will be looking right at the point where the Birkenhead sank. 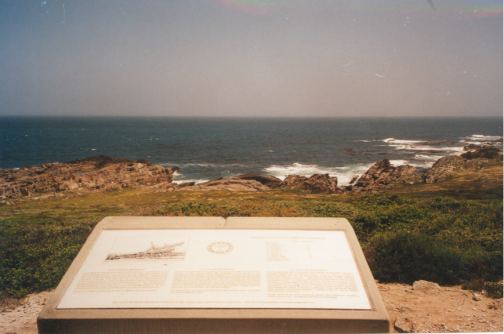 If you get lost, go into Gansbaai and go to the local tourist information office. I had too, since I drove past the sign to Danger Point twice. They are very helpfull and extremely proud of their wreck and will give you a information leaflet with all the Birkenhead’s details. 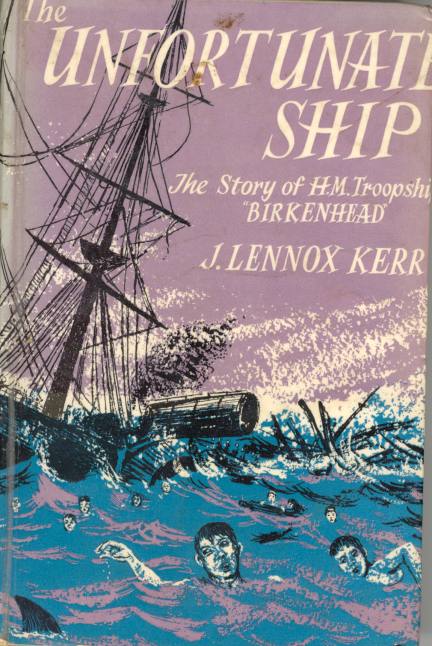 Incidentally, when I came back to the U.K. I was browsing in a secondhand bookshop when I came upon this book. Its long out of print, but you might have some luck yourself. Its a good read and I have taken the liberty of using some of the photos.

The Unfortunate Ship is by J.Lennox Kerr, and was published by George.G.Harrap and Co.Ltd in 1960. 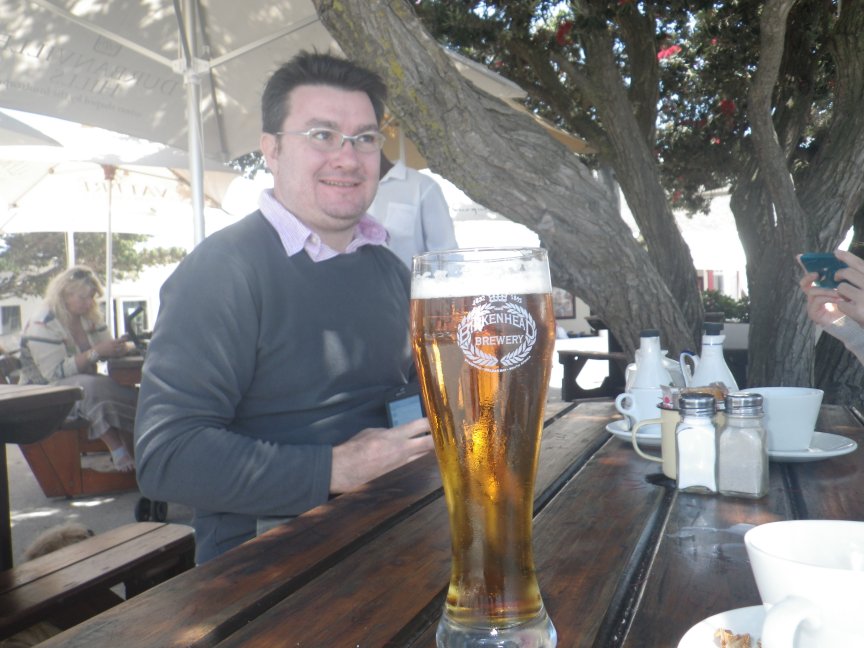 Amazed at how good it is.

The Birkenhead Brewery
In the memory of this famous boat HMS Birkenhead, a brewery called Birkenhead Estate was established in 1998. With its many developments, the vision was to make this the first Beer, Wine & Water producing estate in the Southern Hemisphere. Nestled at the foot of the Kleinrivier mountains near Stanford, the surrounding scenery is enough to take your breath away. Fine food, water and beer are made to serve to perfection. 6 beers are available for tasting including – Black Snake, Honey Blonde, Old English Bitter, Premium Lager, Lite Lager and Red Reloaded Lager. This is a great place to visit and has a wonderful bar full of paintings of the disaster. Outside is a great patio area where you can gaze at a truly stunning view of the mountains whilst having a sip of your favourite beer. The brewery is only about 24 Km from Hermanus,so it’s an easy day trip. 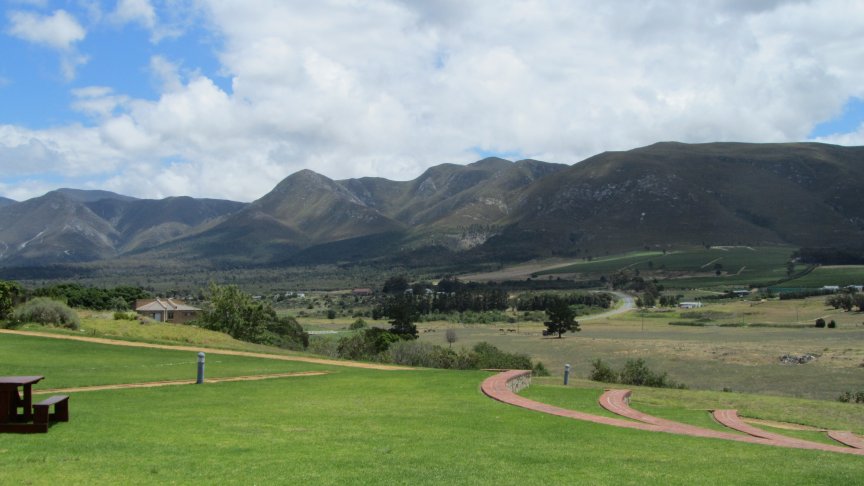 All the world’s a stage. I’ll drink to that.