Since the Plymouth Breakwater was built in 1830 a great many ships have come to grief along it’s mile-long expanse of stone and concrete. Ships and breakwaters seem to go together, but aeroplanes? Well hardly. However, at the west end of the Plymouth Breakwater lies the remains of a Lancaster bomber. How it came to be there is a grim reminder of those desperate days when Britain was engaged in a battle for her very survival, a survival that meant the destruction of the German U-boats. By 1943 the U-boat had almost brought Britain to her knees, and despite fifty-six bombing raids, Lorient, one of the most important submarine bases in Europe was still functioning. 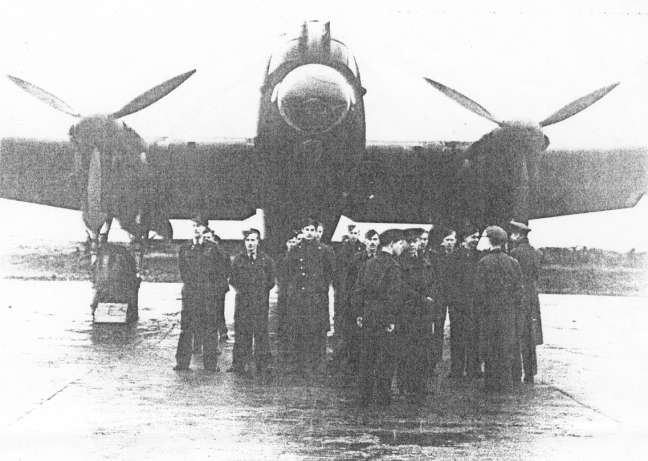 49 Squadron with their Lancaster bomber.

On the night of 13th February 1943 a huge bombing raid was again due to take place on Lorient. Amongst all the bombers, which also included Halifaxes and Stirlings, was a Lancaster of 49 Squadron based at Fiskerton. The bombers attacked in two waves, and this time they caused such an enormous amount of destruction that the glow from the fires could be seen 160 miles away. Later reports confirmed the devastation and described the target area as a complete mass of flames. The price of success, however, was dearly bought, and amongst many others our particular Lancaster was severely damaged. Struggling across the dark sea, the pilot was desperately trying to make an emergency landing at R.A.F. Harrowbeer (just outside Plymouth). Unfortunately the Lancaster kept losing height and the pilot must have known that he would never make it. 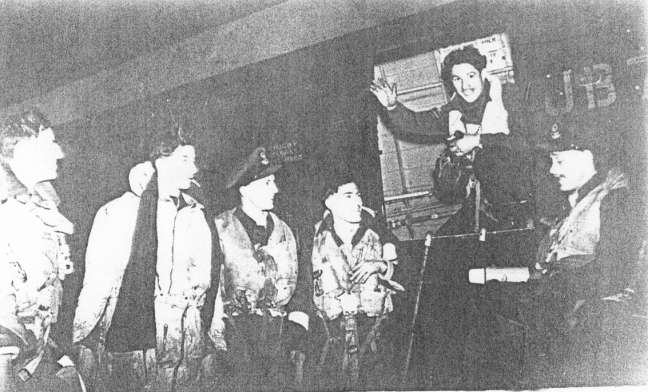 The Boys at Fiskerton.

In a last brave attempt the pilot tried to crash land in Plymouth Sound, but by now the plane must have been completely uncontrollable, and far to low. Falling from the sky, the Lancaster hit the Breakwater and completely disintegrated killing all seven crew outright; Their bodies were never recovered, and the official account of 49 Squadron recorded them as being “missing without trace”. 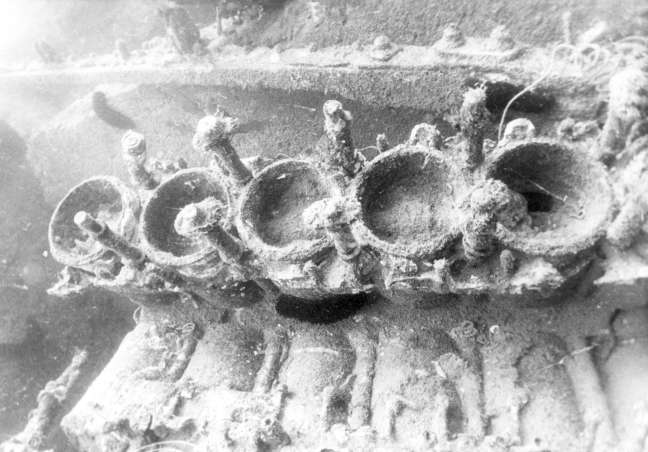 One of the engine blocks.

Today the Lancaster, or rather what’s left of it, lies at the base of the Breakwater in about forty-five feet of water. This area is made up of huge boulders and concrete blocks piled one on top of the other until they reach the surface. The division between these blocks and the sandy bottom is quite distinct, and the wreckage, situated just off the sand is quite easy to spot even if you are not right on the marks.

For the technically minded, the Lancaster was a Mark Three, powered by four Rolls Royce Merlin 28 engines, and it is one of these engines which first attracts the eye. Now a lot of this aircraft has already been salvaged, and this engine is soon to be raised by the Devon Aircraft Recovery Group. So what remains is obviously well broken up, and mostly trapped underneath the concrete blocks. 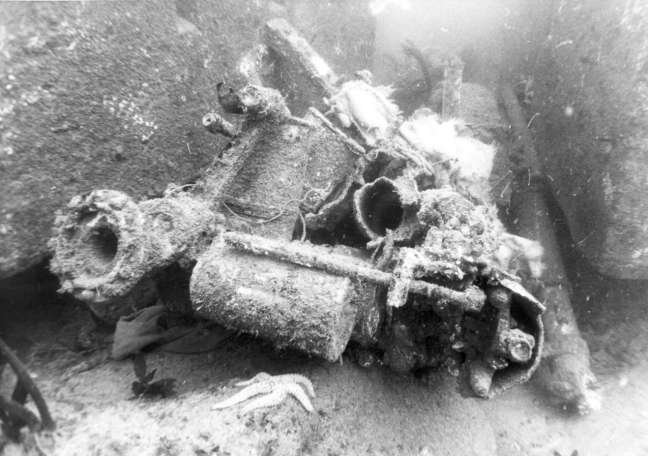 This could be part of the undercarriage.

However, there is still a lot to see, and a search of the surrounding area will reveal other smaller pieces of wreckage, most of them stuck in the crevices between the blocks. The main pieces of wreckage, however, comprise an engine nancelle complete with battered propeller, a large amount of airframe, some undercarriage, and a complete engine. Apart from the wreckage the whole area is a joy to dive, with the contrast between the flat sand and the tumbling boulders providing the ideal environment for a host of different marine life. 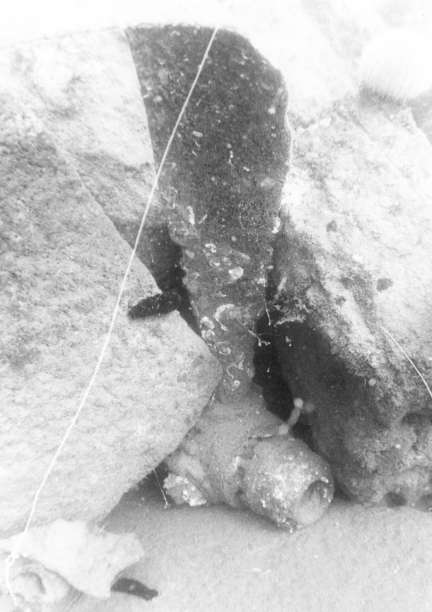 Huge spotted wrasse, shoals of pollock and pouting, and even that most elusive of fish the silvery bass, all compete for your attention, making this a site that surely has something for everyone. On a personal note, I have always considered the remains of this Lancaster to be a small war grave, and try to treat it with respect. At the same time it is a wreck and I enjoy diVing on it. I am sure that “they” would understand, I hope you will too. 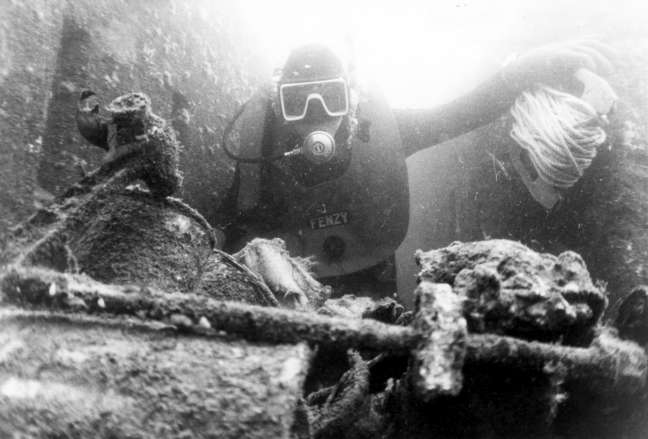 More wreckage in the rocks.

I am very grateful to Simon Raithby-Allin for the photo and poignant notes below. 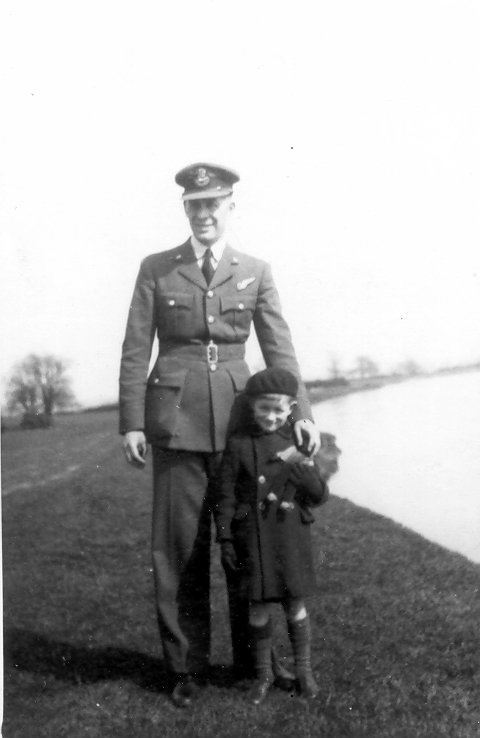 Please find the attached image of my Grandad, Ron, navigator on the Lancaster in Plymouth sound. He is pictured with my uncle, John, who sadly died a few years ago. My father wasn’t born when Ron died, so there are no pictures of the three of them together. This picture is taken from the 49 Squadron web page, but my dad still has the original on his desk! Sadly, John used to wait at Nottingham train station daily for Ron to return, but he never did. John would then run back to Carlton, on the outskirts of Nottingham, kicking cars, very distressed, every day.