Every so often you come across something completely outside your experience. One day, Dave and me were diving on one of our favourite areas for bottle collecting. The bottom is just gentle sand ripples, and for a quiet dive I was just content to drift over the area in the hope of finding the odd stone bottle. On this occasion I found more than I bargained for in the shape of a small wooden casket. Well actually, about seven of them. They were just protruding from the sand, were quite dirty and as I could not quite make out what they were, I stuck one in the scrap sack and carried on with the dive. Up top we tipped out the sack and there was the little casket. It was made of some sort off hardwood now black with water stain, had a series of holes drilled in the sides, and had a weighted bottom. 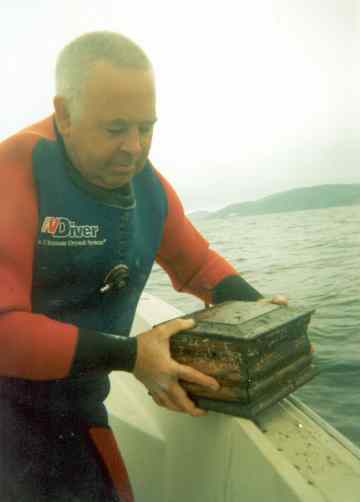 Dave with the ‘casket’.

Dave immediately recognize it as a cremation casket. Luckily the box was still intact, as he was diving next he took it back down and replaced it in the sand. On his dive he saw three more but left them alone. We dived the area several times after that and saw the odd one or two, but after a couple of years with the action of the wind and tide the sand covered all of the caskets over and we have not seen any for years. However it made us think why they were there. Was it a convenient and cheap way of disposing of the poor victims of Plymouths dreadful bombing during the War when several graveyards were blown up? Or were they much older and possibly the cremated remains of plague victims? In order to find out I contacted one of Plymouths oldest Funeral Directors Walter. C. Parsons who started up as long ago as 1842. I showed them a photo of the casket and they immediately recognize as a type of cremation casket used for burials at sea. 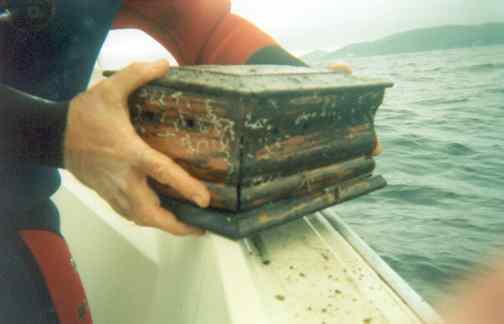 The joints were glued together.

They also dispelled any ideas I might have had about plague or war victims. They also told me that they did not think the casket was pre War, because most of them had their joints glued together, and the ones we had found were still in fairly good order. Apparently burial at sea is still carried out but under very strict controls. Usually the people who request this service are ex. Navy or have some connection with the Navy. When it is convenient the Navy take out any caskets on one of their warships and commit them to the deep with an appropriate service. If you have no connection with the Navy then a fishing boat or some other vessel is chartered and the same is done. You can of course have a complete ‘burial’ at sea, and this used to be done in an area a couple of miles off Rame Head. 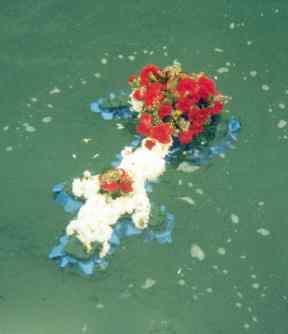 Sometimes wreaths are dropped on Anniversary’s.

Unfortunately on a very few occasions the bodies were not properly weighted, and they floated into shore causing distress all round. The regulations have been tightened up recently and now the nearest place you can be ‘buried’ is the Needles reef. Walter. C. Parsons does not offer this service, as it requires a specialist company, but could no doubt organize it if required.