One of the largest wrecks in Falmouth Bay is the Caroni River, a 7807-ton oil tanker. She struck a mine on January 20th 1940, just after she had left the Harbour to carry out engine trials, and she sank with in the hour. This caused a bit of a panic back in Falmouth because the area had recently been swept for conventional mines, and no reports of any aircraft dropping parachute mines had been made. This left only one answer, a German mine laying submarine, which was capable of laying up to nine mines. 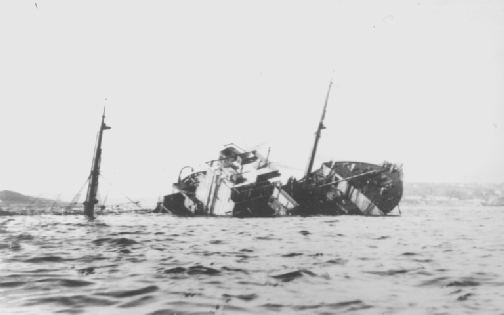 Caroni River sinking by the stern.

Since the Caroni River had hit one, this left a possible eight mines floating around the busy Bay area. A hasty sweep was made using the Caroni River’s last course and speed as a guide. Sure enough during the next couple of hours eight mines were safely detonated. The Navy at Falmouth however were still very worried. How on earth had the German submarine managed so close inshore at night without running into something? A trip around the Bay that night soon revealed the fact that St. Anthony’s light was well silhouetted against the night sky and it made a very good transit mark with the flashing light of the Manacles buoy. The buoy was quickly extinguished and was not relit until after the War.

The charts of Falmouth Bay show three wrecks right slap in the middle of the Bay. These are in fact all the Caroni River that broke into three pieces as she sank. Today the wreck lies on a bed of sand and shellet in about seventy five feet of water. The visibility is good, usually twenty feet and the wreckage is scattered over a very large area.

I am grateful to James Martin for the 1930 crew list below. His father in law was on the ship at that time. 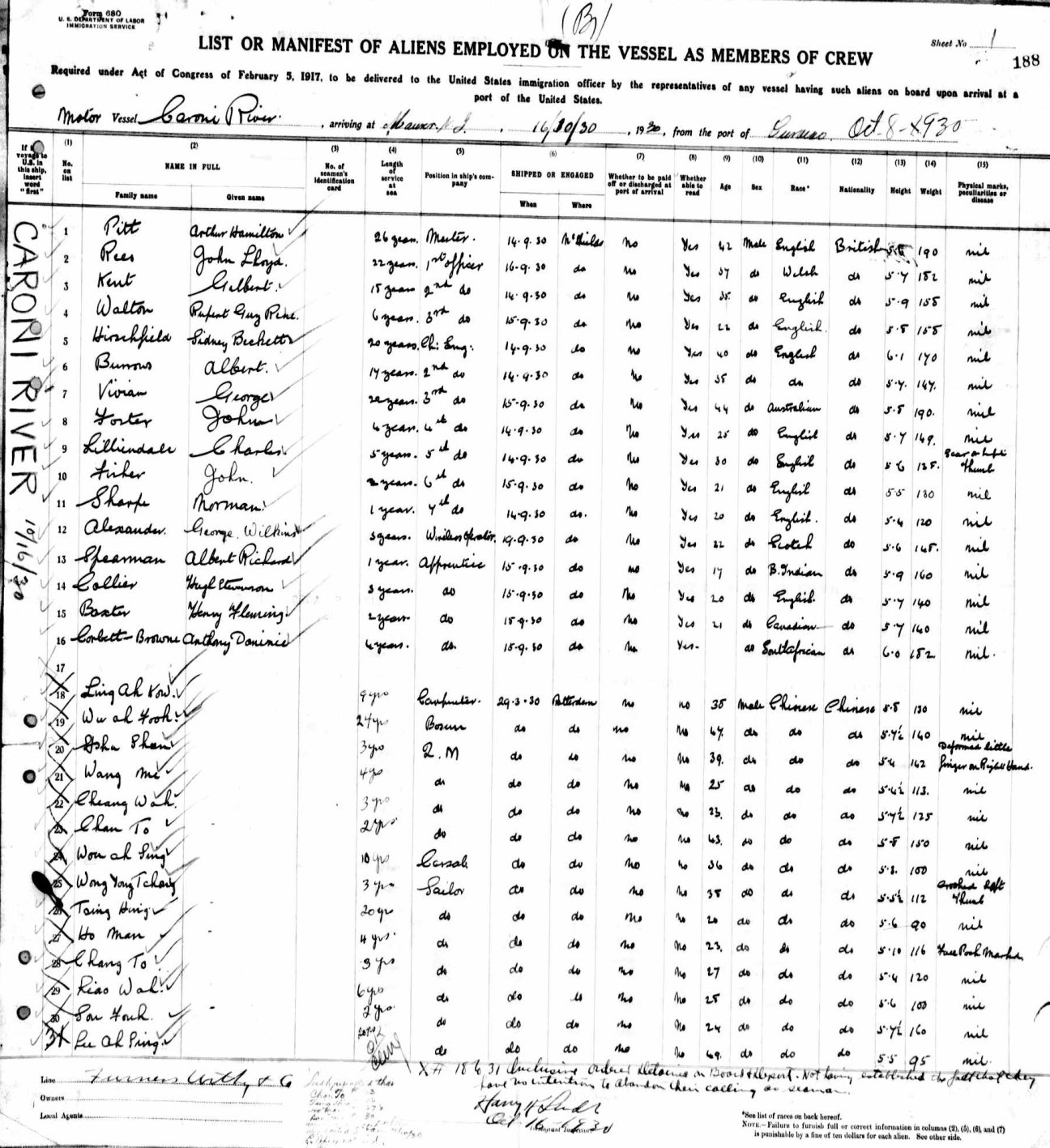 One of the main surprises was the large numbers of cuckoo wrasse that inhabit this wreck. Here in Plymouth we expect one or two but this seemed like a busman’s holiday. There are large amounts of plating and ribs scattered all about and it is very difficult to decide which bit is which. On the bit I was diving on there was a large section of hull that looked like the bow.

Other than that it is all just a huge jumble of plating and pipes. The fish life is quite good, the usual pouting and small wrasse and there are some small lobsters. Considering the amount of wreckage I would have thought there would be more variety. Generally the Caroni River is a good but uninspiring wreck, even so I feel that I have not seen it at its best so will dive it a few more times to see if my opinion changes.

I am very grateful to Susan Potts-Bury for the following information and photo’s of her Dad. 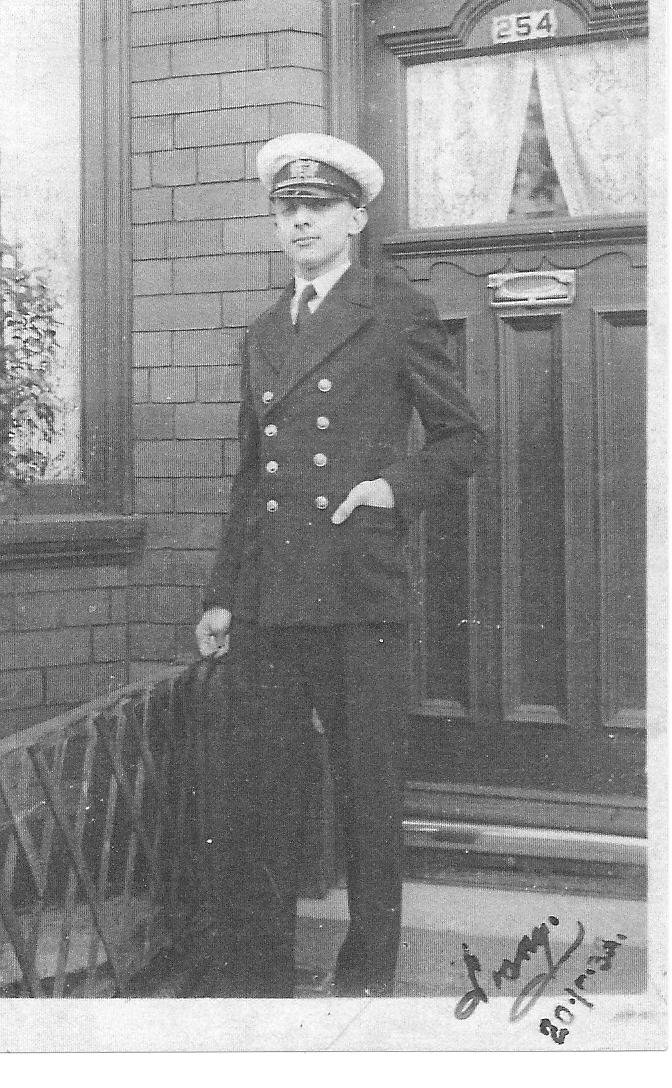 Hi, I am writing up my family tree and I am adding the meat to the bones, so to speak. So seeing your article about the Caroni River is of great interest to me. 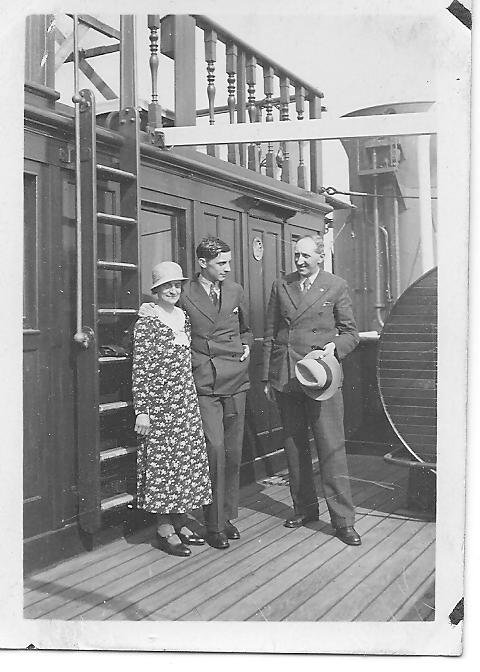 Dad with Gran and Grandad on an unidentified ship.

My Father sailed on the Caroni River for 16 months just before the war. His indenture with Houlder lines of 4 1\2 yrs. (He was on the Elstree Grange first) was up and as he could see war was imminent he decided to join the R.A.F. and be on the winning end of a bomb – he didn’t fancy sitting on an oil tanker while it was being bombed by the enemy. 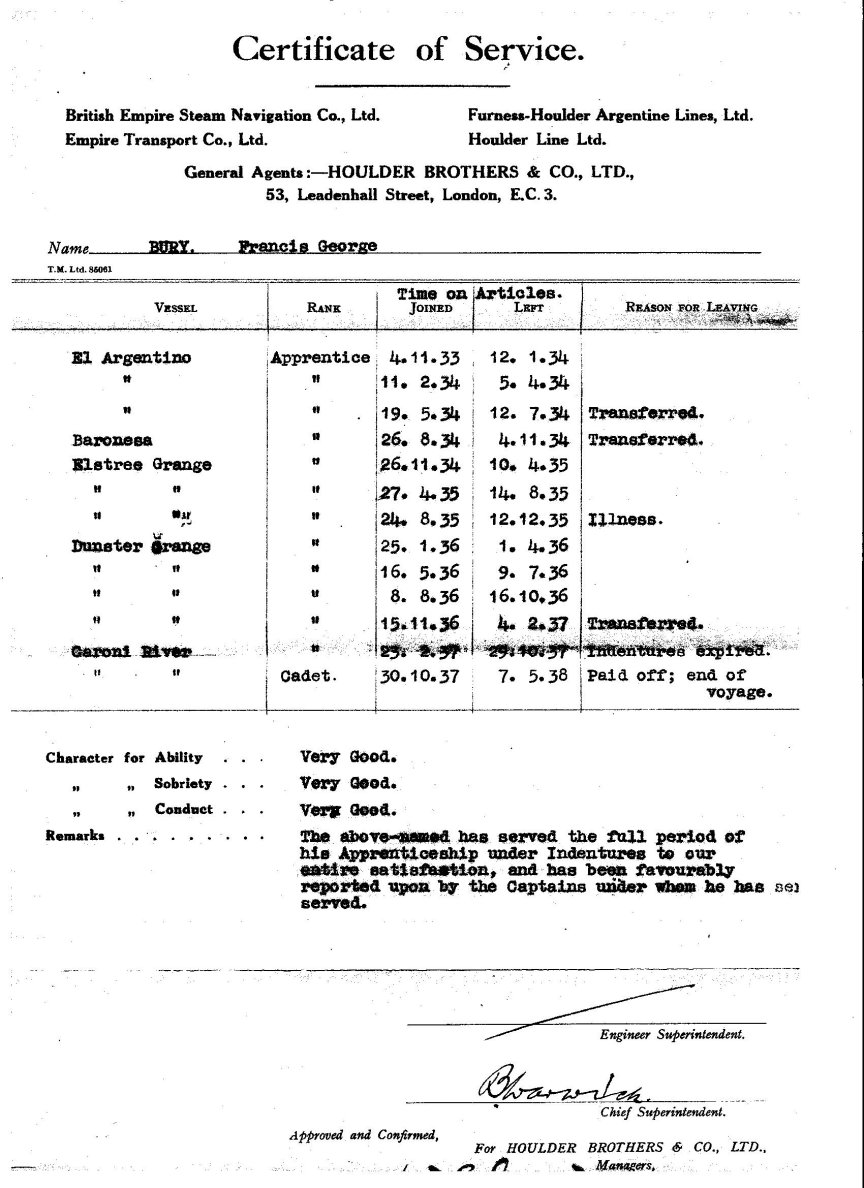 In a book about his life he wrote a little about being on the Caroni River. He said that although by today’s standard it was small – to him it looked magnificent. He joined at Falmouth and they sailed to Curacao in the West Indies, Basra and other Gulf Ports picking up oil and transporting it to Europe, Africa and South America. Voyages lasted eight months. My Father finished his indenture in May 1938. Seeing now that the Caroni River ended up being destroyed by a mine – my Father was right to get off ships and join the Air Force. 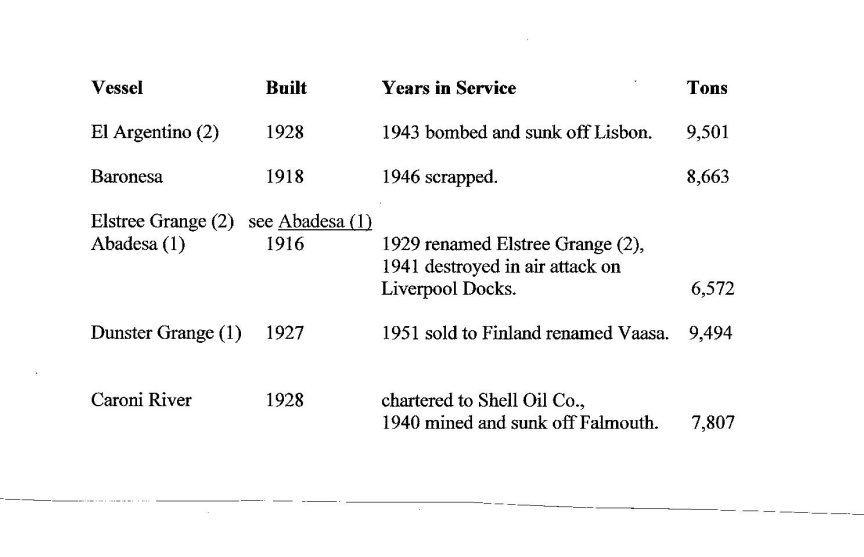