Ever since Plymouth became established as a town in the 13th Century, the Cattewater has been a main anchorage. Indeed there is some evidence to suggest, that even before that, Mount Batten was a Celtic trading post. Over the years the anchorage has seen plenty of activity from pirates in the 15th Century using the Cattewater to strip and refurbish their prizes, to the Royal Air Force using the area to moor Sunderland flying boats, and later running their air sea rescue boats from the same location. In fact it was those same rescue boats that precipitated the finding of what was then one of the oldest shipwrecks in the country, and caused the formation of the Protection of Wrecks Act 1973.

The R.A.F. was undergoing a restructuring of their rescue fleet and needed bigger boats. Up till then, because the flying boats and the current rescue craft drew little water, the channel had only been dredged to a depth of around six metres. The new boats would need a deeper channel than that, so in the summer of 1973, the then Department of Environment, made arrangements to have the channel dredged. On the 20th June the work on the Anglo Dutch Bucket Dredger Holland XV11 was proceeding a pace when up came some timber wreckage. The site agent, a Mr. Broekhoven reported this to the D.O.E officer in charge of diving in the area, who decided that the wreckage was of historical interest and so the dredging was stopped, and the Receiver of Wreck was informed. 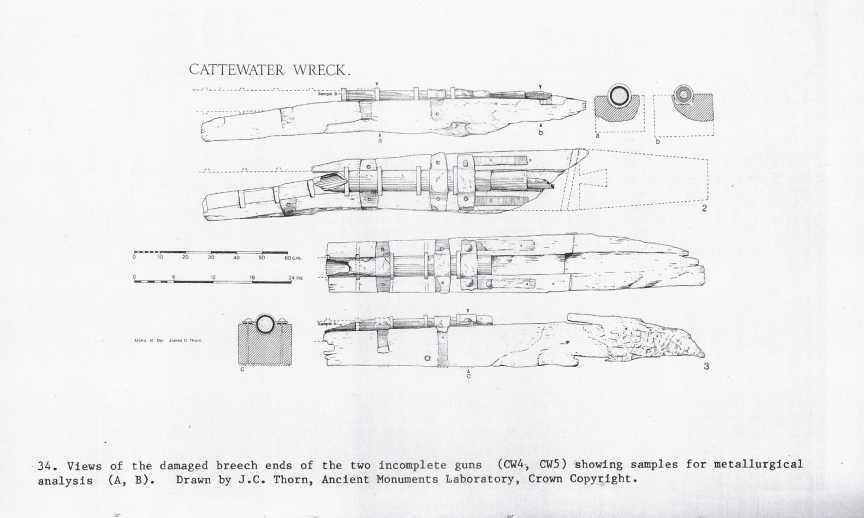 Diagram of one of the Guns.

Over the next few weeks a series of dives were done which found fragments of what seemed to be a breech loading gun, and several pieces of glass and ceramic provisionally dated to the later half of the 18th Century. Deeper down however were more pieces of wood rather like Tudor floorboards. It was fairly certain that a very old vessel was down there somewhere, so the site was extensively plotted and discussion entered into with the D.O.E. as the channel still had to be dredged. It was decided to carry out a full site plan and remove any objects found into safe keeping, but a strict limit was put on the diving time. In the dives during August the keelson and a third gun were found but the team was frustrated in their efforts to completely define the boundary of the site as there was a great deal of old ballast in the shape of stone boulders of local stone and flint which was not local. 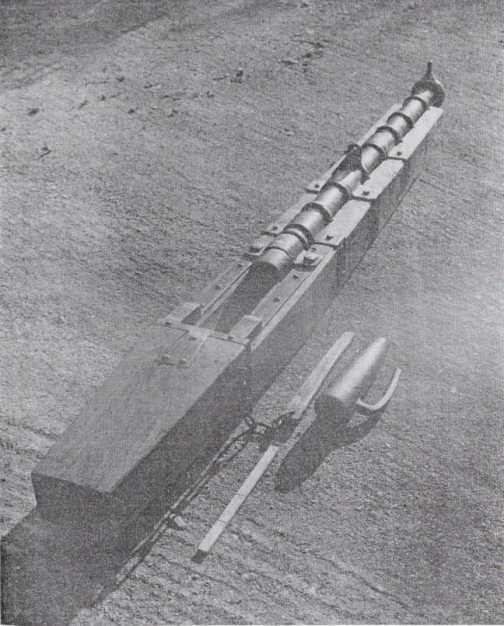 Ironically, the dumping of unwanted ballast was a real problem in the 16th and 17th Century’s, rather like fly tipping today, and although there were bye-laws to prevent it the dumping still continued. Also this was not the first time an archaeological site had been looked at in the Cattewater. In May 1886 a 90 ft Barque was found in the northern part of the harbour which was dated to the first part of the 17th Century, and a small cast iron swivel gun was also found. At the time it was assigned to the Civil War when the Royalists held the southern side of the Cattewater. If all that was there, then there is a strong possibility that a lot more is lying undisturbed on the bottom.

The dredging contract ended on the 21 August and the authorities became worried that all the divers in Plymouth would go and raid the site (although they later admitted that all the water users, including the various diving groups, had been most co-operative), so an order under the new Wreck Protection Act that had come into force in July was applied for and granted, making this the very first protected wreck in the U.K. The National Maritime Museum then applied for a licence to complete the survey. This was all finished by the end of 1974 and there the matter rested until further work could be carried out in conjunction with all the various bodies now involved. Far from (in my view) helping, the Wreck Protection Act seemed to cause a bit of paralysis whilst all involved interpreted what it meant, and the usual bureaucratic delays crept in. In the end it could not be excavated because the Government, who now owned the wreck said that excavation would cause damage to the remains.( didn’t stop them raising the Mary Rose) Still a notable effort by all concerned, in extremely trying conditions. 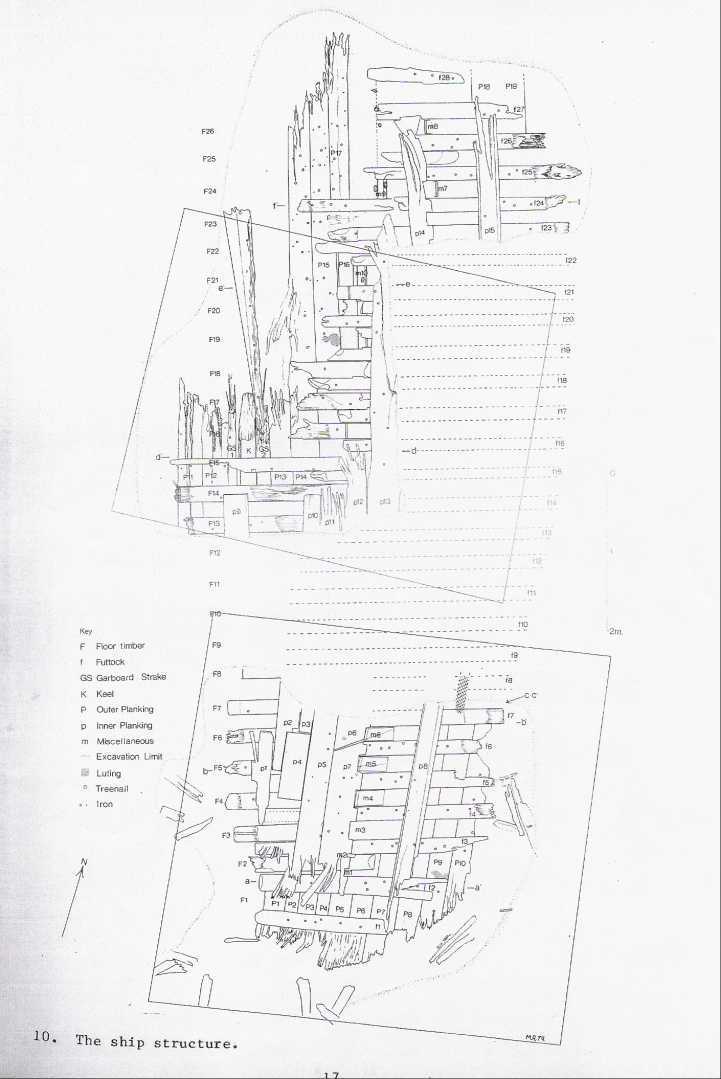 In 1976 the Underwater Research Group from the University of London carried out a four week project to survey the site and recover enough data to date the site. From 1976 to 1978 the U.W.G. received further funding from a group called Earth Watch and America non profit organization and continued with its work. Because the visibility was so bad, photography was not much use to them, and so none of the crew had much idea about the overall look of the boat, just the bits they happened to be working with. Basically nothing new was learned, but a lot of the technical problems were ironed out. The Group discovered that what remained of the wreck lay heeled over on one side. Various timbers were raised and stored in a tank in the Dockyard and then transferred to Bovisand Fort. Other frames were raised and stored at Mount Batten, but they somehow got lost. The dating of the ship and her sinking are all approximate as the data is still very sketchy.

The most likely date is anywhere between 1500 and 1550. The keelson is similar, though smaller than that of the Mary Rose, and the stratified pottery found around the site, probably from the ships ballast, is similar to cellar deposits found in London between 1495 and 1530. The best find was a leather purse pinned to a futtock in the hull. This seemed to be of Tudor pattern. The three swivel guns found were all the same make and of an early composite iron construction. They were considered to be obsolete by the 16th Century. So what have we got? Well a three masted ship of 2 to 300 tons burden in the first half of the 16th Century, with possible links to Holland and France. The ship is of international importance, as its one of the few ships of this period to remain unexcavated. 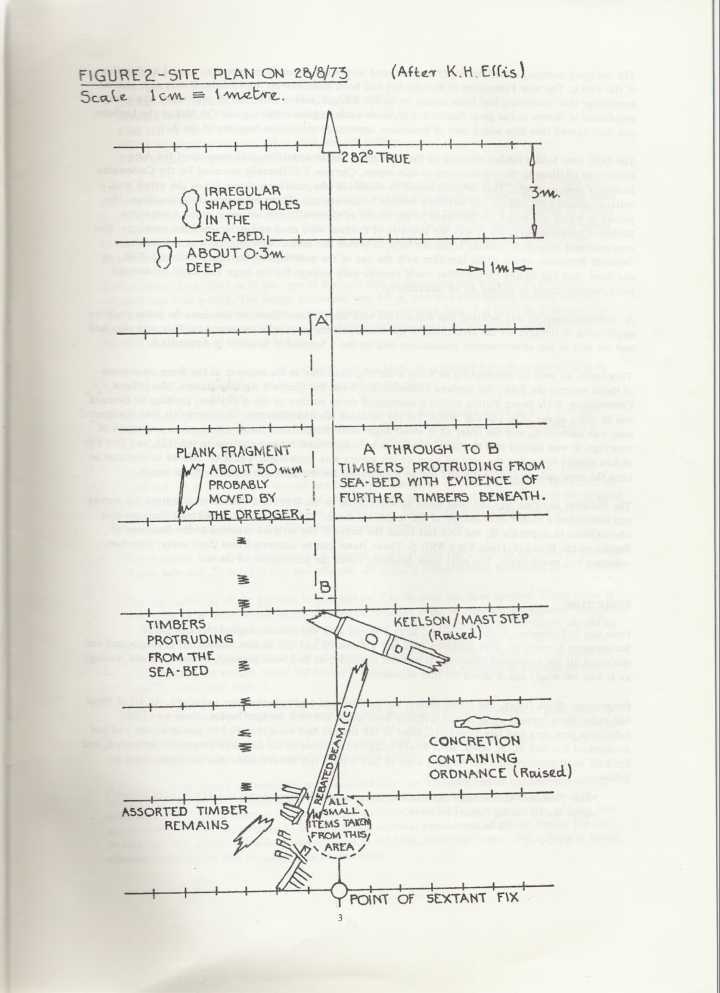 This is a crucial period in understanding the development of naval construction. The period between say 1480 and 1525, produced a revolution in naval design, because for the first time it seems that mathematics was applied to all parts of the construction and rigging. Because of the obsolete guns this could mean that she was pressed into service as an armed merchantman by a navy desperate to use all the vessels it could. To give this ship a name is much more difficult. It could be almost any ship, but not a ‘great ship’ as its name would have lived on (like the Coronation or the Mary Rose). A Portugese ship hit the German Rock in 1540, but old charts put this at the mouth of the Tamar, not in the Cattewater. Another contender is the St. James of the Groyne, which on 17th January 1494, lost all her rigging in a great storm and broke up on the shore. She was described as a ‘ship of great value’ and her size is certainly consistent with the externals and the guns of the Cattewater wreck, but there really is not enough to make even a tenuous identification. It could be one of the Dutch ships that were confiscated in 1597, one of which ran aground in the Cattewater, or the Roebuck in 1694 which was also wrecked whilst forming up for an expedition to the Western Isles under the Earl of Essex. You guess is as good as anybody else’s.

Meanwhile after years of neglect the hunt has started up again.(2006) Under a new mantra that all excavation is destruction, a new project leader Martin Read has brought in some hi tech equipment that he hopes with uncover the wrecks secrets without anyone getting wet or disturbing the wreck The Sub-bottom Profiler from East Germany sends sound waves a metre into the sea bed and sends back information which shows the layer of sea bed including the wreck. The Side scan sonar from Plymouth uses sound waves which reflect off of the top of the sea bed. The Magnetometer from France, which was experiencing problems, detects changes in the earth’s magnetism and would pick up metal work from the ship.

The equipment has been described by experts as “top of the range” and archaeologists travelled from around the country to watch it in action. The information needs to be processed further before any results can be found. But Mr Read said “The data we have got is interesting, it’s all quite exciting.” Once processed the information will be used to “re-imagine” the wreck, producing a plan of the site and 3D images of the remains of the vessel. I will be very interested to see that.