I am very gratefull to Commander Mike Norman Royal Navy, who was the Captain of Sea King 592, for his first hand account of this epic rescue. 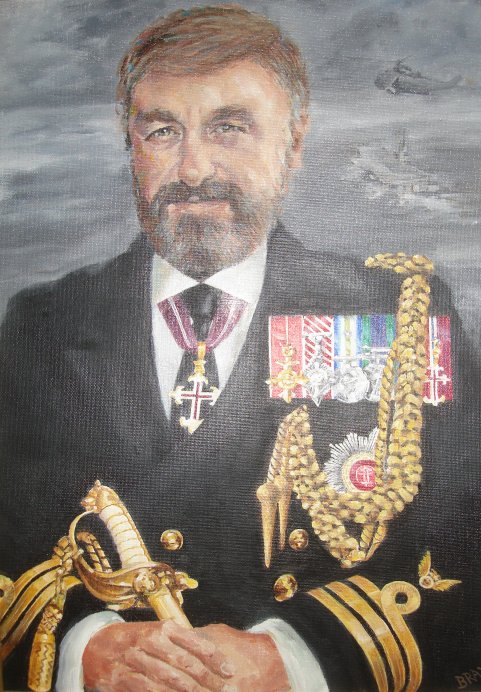 It is 33 years almost to the day since the tragedy of the South Shields trawler BEN ASDALE but to me it still feels like yesterday. I was the Captain of the aircraft. I have had couple of occasions in my naval career when the minute details of focussed and intense activity remain as clear as day; the other being the moment an Exoccet missile hit HMS SHEFFIELD in the Falklands WAR and sunk her.I was Second in Command and First Lieutenant of that Type 42 Missile Destroyer, now thirty years ago, and grateful to have survived where twenty of our ships company did not and whose grave is the South Atlantic”. I am very heartened to read Skipper Barty Coe’s comments putting the record straight and I hope he gets to read mine. I was also pleased to read Peter and Mike Billcliffe’s comments although I don’t think I ever met them. As regards the events on that wild night, the Captain of RNAS Culdrose , Captain ‘Jock’ Tofts decided the weather and icing conditions were outside limits and that it was a ‘no-go’. But then we heard in the Culdrose Ops Room from the Falmouth Coastguard that the ‘Breaches Buoy’ attempt had failed and since the Falmouth lifeboat could not get near the vessel the only remaining means of rescue was by helicopter. Captain Tofts left the decision with me and after consultation with the rest of my duty SAR crew we decided we would give it our best shot since if we didn’t it was unlikely those eight left onboard would see the morning. 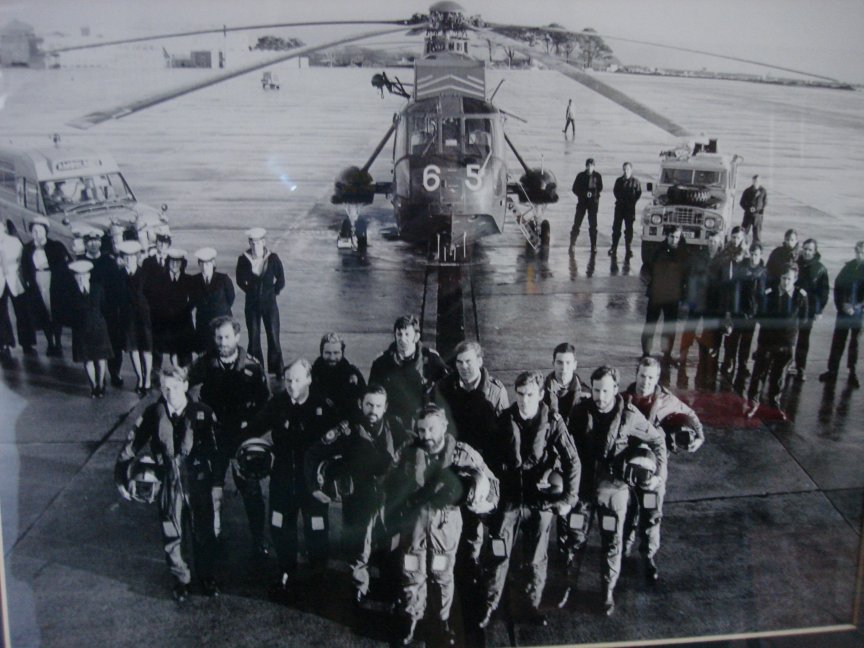 Photo 691 shows the naval aircrews and ground crews plus supporting station emergency personnel on SAR duty at RNAS Culdrose over the Christmas and New Year period in 1978/79, heroes everyone of them.

I won’t go into a blow by blow account but suffice to say it was the most challenging bit of flying any of us had done before or since. One could say it was a close run thing since on lift number 3 when a survivor was picked up with a huge swing on the winch wire the aircraft became almost uncontollable. As one Coastguard Officer said later ” the rotor blades were almost touching the cliffs at one point” And as the rescue progressed the intercom between the crew failed and a lot of the internal communication was done on bits of paper being passed backwards and forwards ! On top of that we had also lost communiaction with the Air Station who we learned later had a power failure and there was no ‘get you home’ radar assistance. But we did manage to complete the rescue and make it home due in no small measure to our excellent training, good teamwork and quite a lot of luck!! 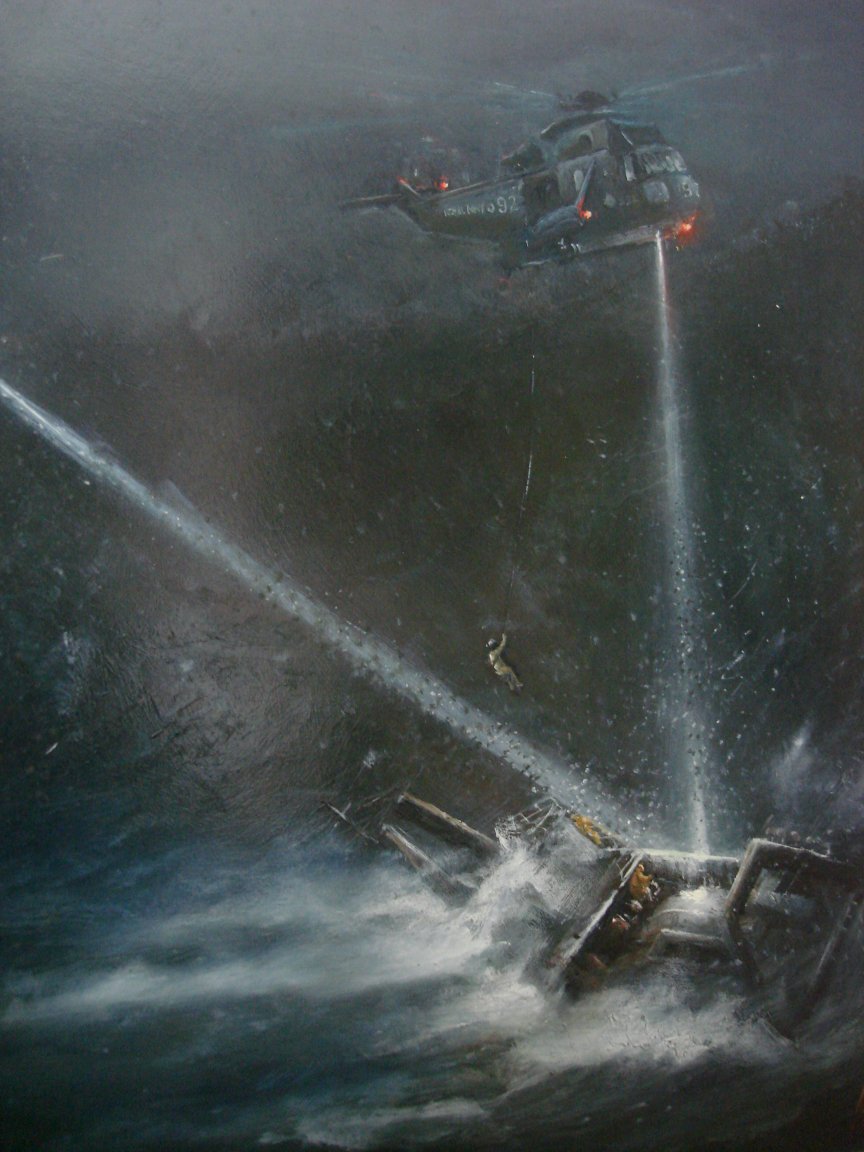 We were all grateful to have been acknowledged for our efforts later; that is the First Pilot Lt Tony Hogg, later to become the Captain of RNAS Culdrose; the Second Pilot, Lt Larry Jeram-Croft; Leading Aircrewman Jan Folland; Medical assistant Brain Steele, a volunteer from Culdrose Sick Bay and myself, the Captain and Observer. I wonder if the Billcliffe Brothers received recognition for their bravery ? They certainly deserved it. After this long night we all went to the Sick Bay after putting the aircraft to bed, at around 0630, to see our survivors, one of them a Russian, all tucked up in bed and recovering, some from hypothermia. After a hearty breakfast and an hours kip we were off again to take a pregnant woman who was cut off in the snow, to hospital. It was a few days later that the reality sunk in and how close we had come to the BEN ASDALE rescue being a horrific disaster. Eyewitness accounts are always very thrilling and this is no exception, except that it rather modestly understates the sheer enormity of the task that faced the pilot and crew of Sea King 592. Two Airforce crosses, and 3 Queens commendations were awarded for this intrepid rescue. You can read the citations from the London Gazette below.You really could not make this up.

Lt. Commander Mike Norman was the captain and observer of Sea King 592 which took off at 0145 on the 31st of December. The aircrew had already been briefed that the already atrocious weather would deteriorate and that poor radar reception in the blizzard would probably prevent them returning to Culdrose. Flying at low level to minimise the risk if icing, Seak ing 952 reached maenporth at 0205but was unable to identify the coast, the cove, or the wreck because of the darkness and poor visibility in the blizzard. The gale blowing directly into the cove added to the helicopters difficulties by making an approach from seaward impossible. Using bearings radioed from a coast guard vehicle on the cliffs, Lt Commander Norman had the aircraft fly a circuit until the vehicle’s searchlight became visible. The aircraft was then flown over the vehicle and given a steep decent, establishing it in an automatic hover some thousand yards from the coast. Lt. Commander Norman asked the coastguard to con the aircraft rearwards to a position over the wreck. Aided by the clifftop searchlight this was successfully accomplished despite an increase in the wind strength to Force 9. By now three of the trawlermen had reached the shore in a dingy but three others had been swept away by the heavy seas which were continually breaking over the wreck, now on its side, sometimes concealing it from the view of the aircraft 50 feet above Lt.Commander Norman judged the conditions to be too treacherous to put his crewman down in a double lift strop and decided to use a single strop instead. The rescue began with Lt. Commander Norman controlling the aircraft’s attitude the 1st Pilot maintaining height on the radio altimeter, the Crewman operating the winch and the Co-Pilot watching what little of the cliff could occasionally be seen whilst maintaining radio contact with the Coastguard. Despite problems with holding position over the wreck the first two lifts were successfully completed. 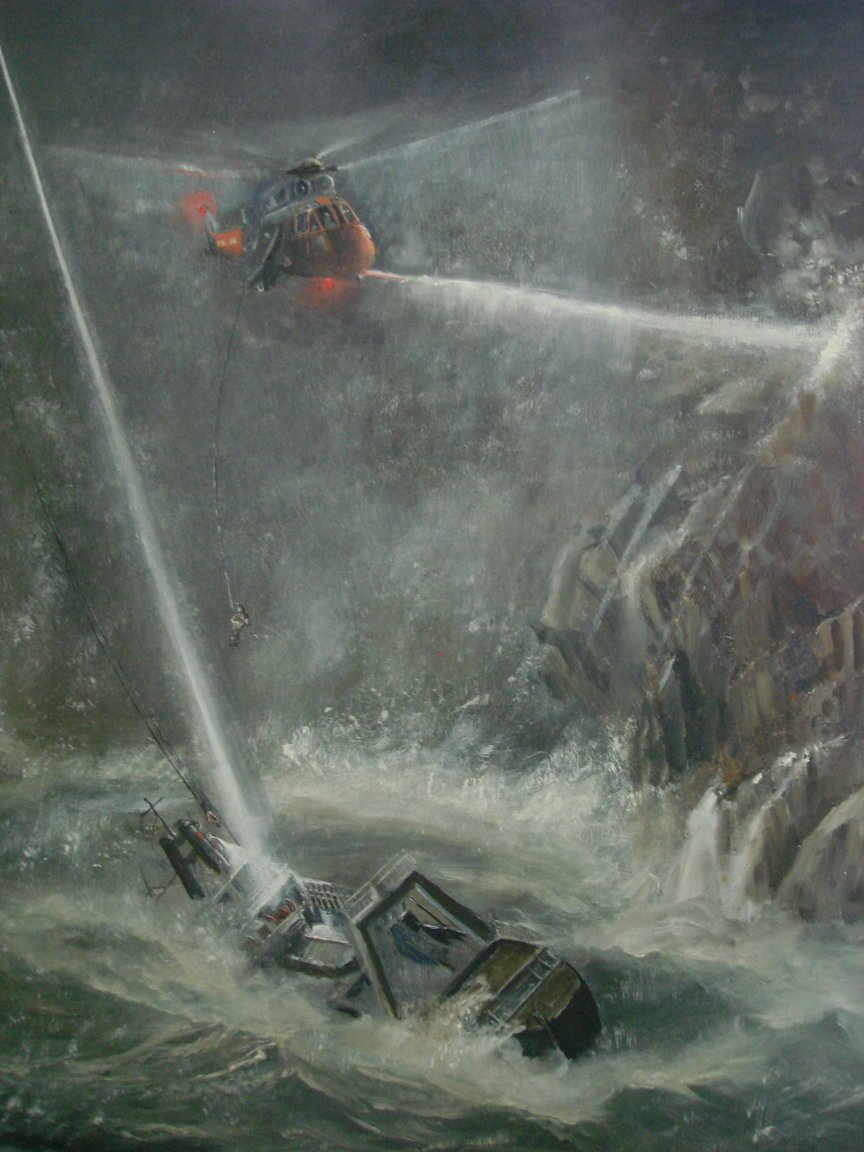 Lt. Commander Norman then decided to attempt the next lift with the Pilot in full control of the aircraft to facilitate a better hover and provide easier access to the forward part of the aircraft for the cold and virtually immobile survivors. At this stage the aircrafts intercom began to deteriorate and with the Pilot now having to rely on verbal instructions from the Observer it was even more difficult to maintain position. The third survivor was lifted with a large swing on the wire as the aircraft, caught by the gale, lurched towards the cliffs which were about 50 yards away but not visible. The winch wire snagged and cut into a fairing aft of the cabin door and lt. Commander Norman realised that the only way to free it was to lower the survivor into the sea to take the weight off the wire. This manoeuvre was sussessfully completed despite the difficulty in communicating with the aircrew. With the snow storm intensifying, the reaward transit into the cove was repeated with Coastguard assistance. At this point Lt. Commander Norman seriously considered abandoning the rescue, but realising that there was no other rescue method available to the trawlermen he decided to continue since it was doubtful wheather the crew could survive unaided for much longer. The remaining five lifts were completed with increasing difficulty as the intercom worsened and finally failed leaving Lt. Commander Norman with no method of communication with his Pilots since it was too dark to see hand signals. 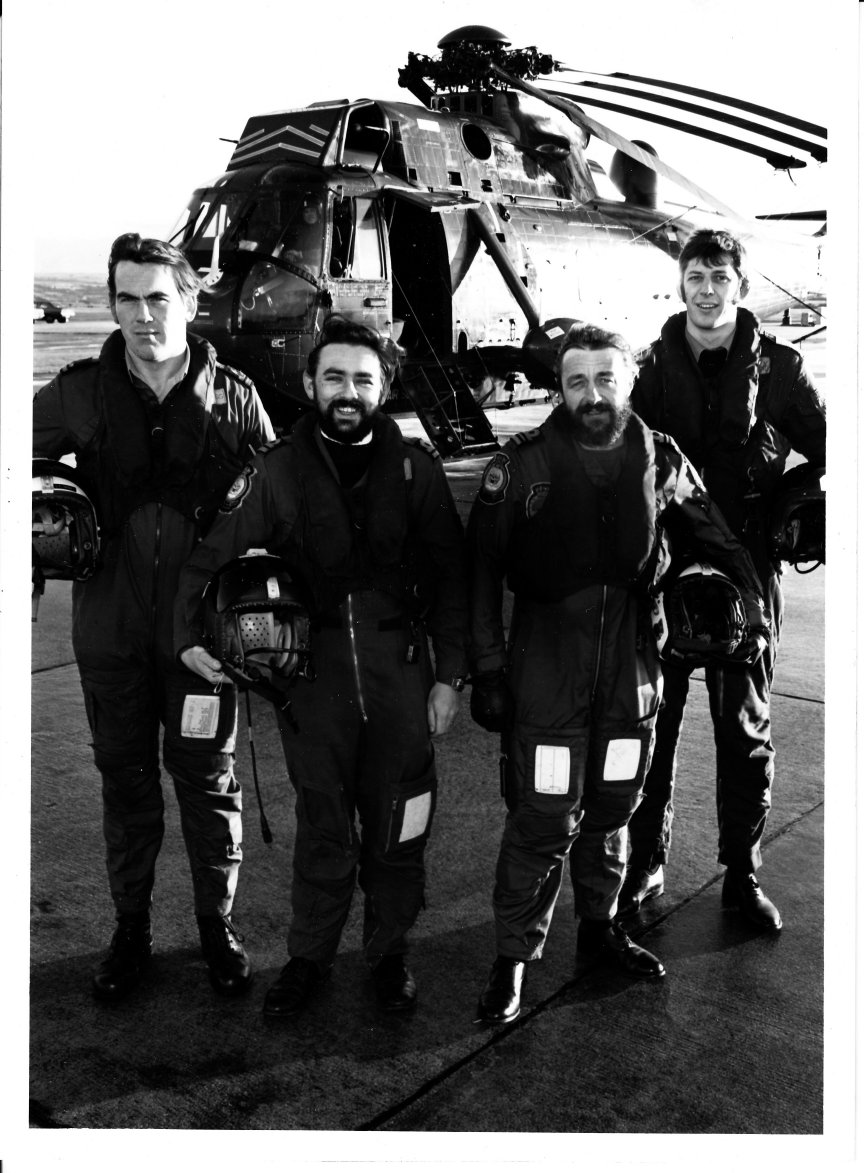 With all eight survivors on board, the helicopter attempted to return to Culdrose despite the complications caused by the intercom failure and poor radar reception. Eventually the intercom recovered and Lt. Commander Norman was able to direct his aircraft to a position overhead the field using the aircraft’s radar. Once the aircraft had been landed, the survivors were taken to the sick bay, and in spite of two cases of hypothermia all those rescued by the helicopter survived. Lt. Commander Norman led his crew in extremely difficult circumstances of weather, sea state and aircraft serviceability in one of the most dangerous rescues undertaken by a Naval aircraft in recent years. It is largely because of the leadership, professional competence, calm, clear thinking, and great courage displayed by him in these atrocious conditions that those who remained on board the Ben Asdale were saved.

The Queen has been graciously pleased to aprove the award of the Air Force Cross.
Lt.Anthony John Marsden Hogg, Royal Navy.

Lt. Hogg was the 1st pilot of SeaKing 592 which was launched in the early hours of 31st December 1978 to rescue the crew of the Trawler Ben Asdale.

Weather conditions on take off were atrocious and through out this hazardous rescue the aircraft was flown well beyond its normal weather limits. As the rescue proceeded the wind strength increased to Force 9, visibility deteriorated as the blizzard intensified and communications worsened as the aircrafts intercom steadily failed cutting lt. Hogg off from his fellow crew members. Nonetheless, he remained calm and in control throughout although he knew that on occasions the aircraft was being blown dangerously close to the cliffs. The turbulence of the air and rough seas produced extraordinary variations in pitch and roll and yet Lt. Hogg remained unruffled as he maintained the aircrafts height and monitored its attitude whilst hovering. On completion of the rescue, with the intercom totally failed, Lt. Hogg attempted to fly the aircraft back to Culdrose. However radar reception in the blizzard was so poor that it was only when the intercom recovered that the aircraft could return using its own radar information interpreted by the Observer. Lt. Hogg remained composed throughout this highly dangerous operation. He co-operated closely with the Captain of the aircraft to achieve the rescue in the most effective way possible even though this method took a large part of the aircraft’s control away from him. He showed great courage, supreme professional competence and devotion to duty in the face of almost impossible conditions.

Queen’s Commendation for valuable service in the air.

Lt. Lawrence Maynard Jeram-Croft, Royal Navy. For his skill and personal courage as Co-Pilot of Sea King 592 in coping with communications difficulties during the hazardous rescue of survivors from the wrecked trawler Ben Asdale on 31st December 1978

Queen’s Commendation for valuable service in the air.

Leading Aircrewman Christopher John Folland, D105603U. For his skill and personal courage as the Winchman of Sea King 592 during the hazardous rescue of survivors from the wrecked trawler Ben Asdale on 31st December 1978.

Leading Medical Assistant Brian David Steele, D082890Y. For his courage and devotion to duty as the Medical Assistant of Sea King 592 during the hazardous rescue of survivors from the wrecked trawler Ben Asdale on 31st December 1978. (unfortunately no photo) 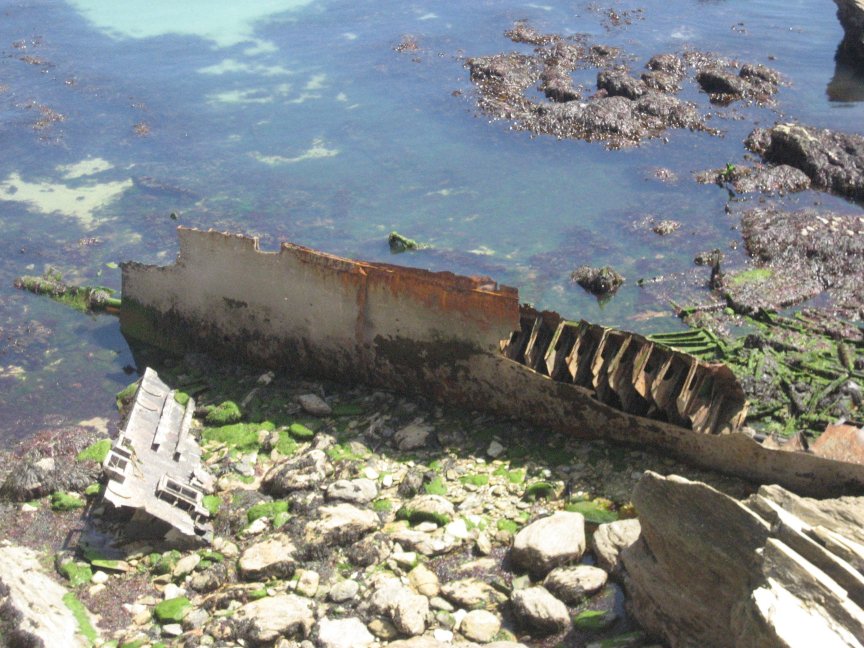 All that’s left of the Ben Asdale