In January 2008 the HMS Hunter was found lying at the bottom of the Narvik fjord in over 1000 feet of icy water by the Norwegian mine hunter Hnoms Tyr. 68 years after she was sunk, this is one survivor’s story of friendship, sorrow, hardship and life aboard a British destroyer during WW2, which was part of a flotilla honoured with the first Victoria Cross of the Second World War. I am very gratefull to Robin Ward for sending me this account of his father’s exploits in the First Battle of Narvik. Having dived on many of the ships that he mentions, his first hand account gives more meaning to those dives, and connects me (in a very small way) to those great events so many years ago. Without people like ‘Fred’ Ward and the rest of the crew of H.M.S.Hunter, the world would be a much poorer place. 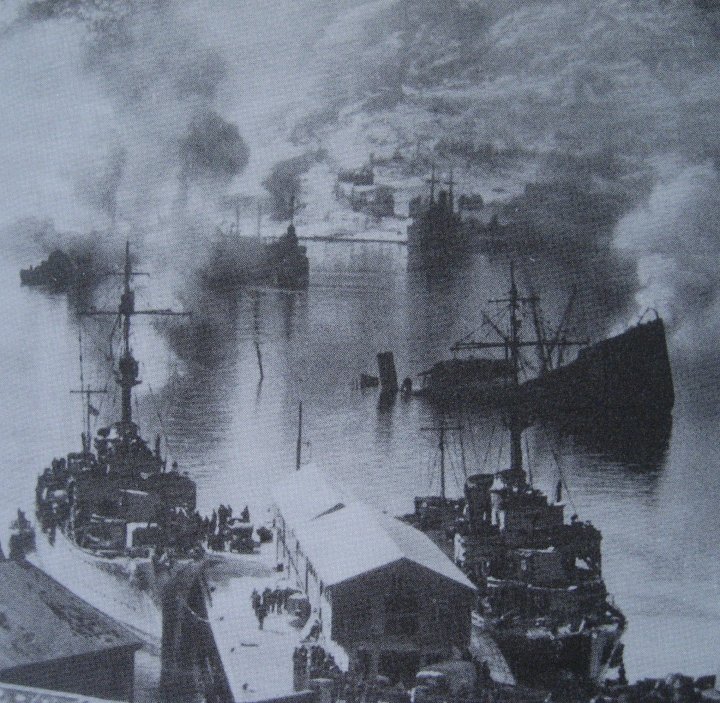 The scene in the harbour after the First Flotilla (including Hunter) struck.

At approx 10:00hrs on 9th April 1940 the HMS Hunter set sail from Scapa Flow in the Orkney’s along with its flotilla leader the HMS Hardy and three other British destroyers, HMS Hotspur, HMS Havock and HMS Hostile, their mission? To guard minelayers, which were mining the North Sea. While near the Skagerrak strait, a stretch of water, which runs between Norway and Denmark, the British flotilla witnessed the battle between the British battlecruiser the HMS Renown and the German Battlecruisers, Schamhorst and Gneisenau, as well as sinking a German U-Boat on their way. This was Fred’s first taste of war! Even though it was bitterly cold, the men were in good spirits; most of them firm friends by this time having trained together and only having each other as company. It was snowing and the sea was huge, at one point the Hunter was sailing down an enormous wave while the Hardy was sailing up another one, just in front. Fred could see down the funnel of the Hardy as they were opposite each other in this massive sea. This is one reality of war at sea that is hardly ever told. It’s not always plain sailing. At 04:30hrs on 10th April 1940 the British flotilla entered Ofotfjord in the Norwegian Sea, not knowing where they were going or what was to come, only being told to be ready for battle stations 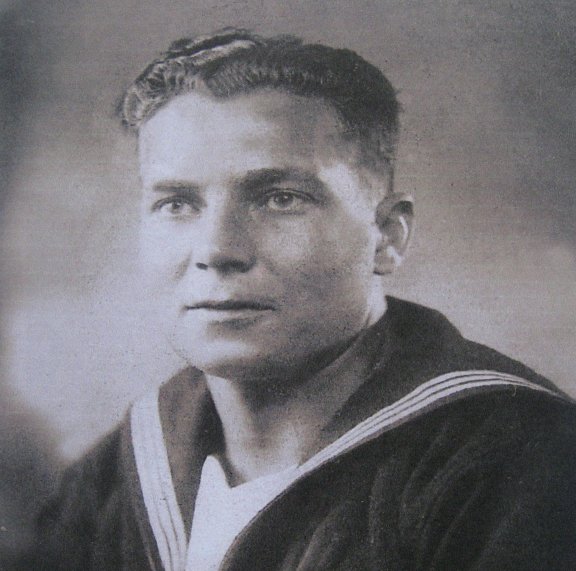 They were in formation with the Hardy leading, Hunter following with Havock, Hostile and Hotspur closely behind. The Hardy stopped near a lighthouse and Fred watched as some of her crew sailed to shore in a small boat, he knows now that it was for intelligence on German destroyers and other ships in the area. When the Hardy’s Captain, Bernard Armitage Warburton Lee communicated back to HQ that there were more ships than expected and that the chances of going into battle and making it back out again were very slim, the admiralty told him that he had to make a decision. His decision was to carry on with the mission and gave the order to “Follow on”. Not knowing at the time, but this brave decision was to have a massive impact on Hitler’s Navy. 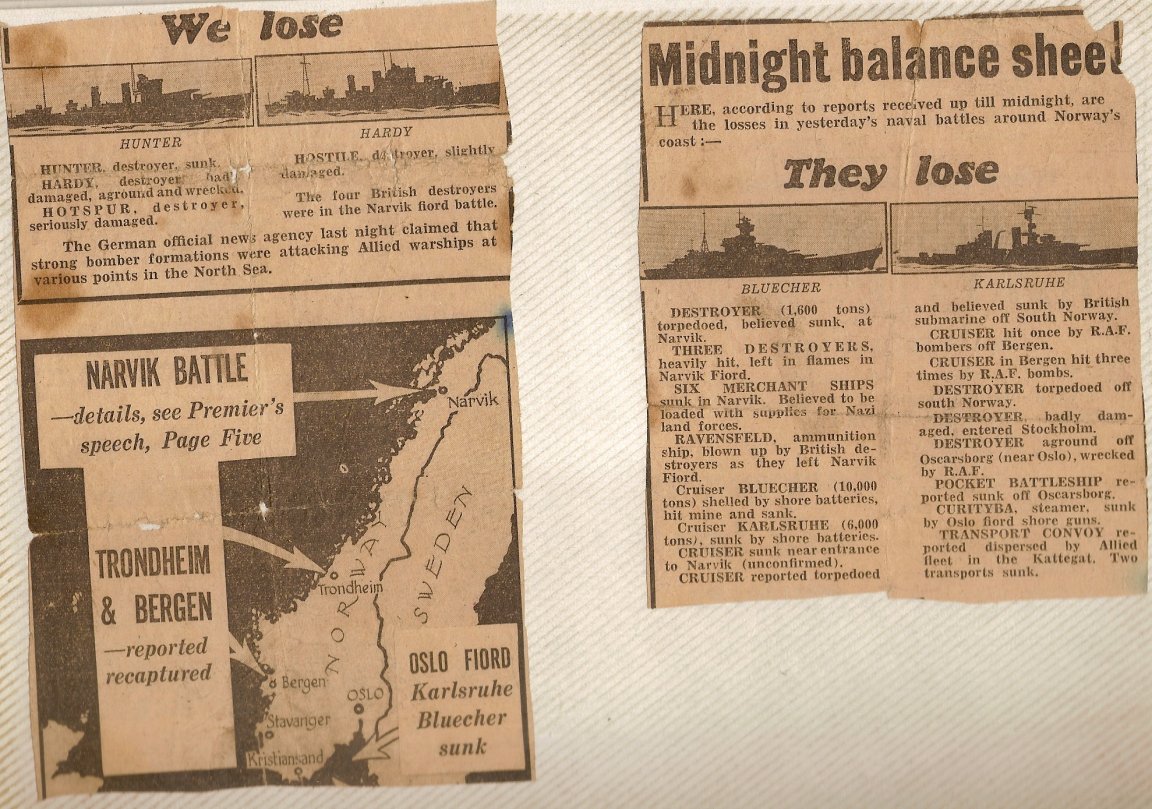 They proceeded up the fjord until they entered the port of Narvik, it was dark, snowing and visibility was very poor, but Fred could make out ships in the distance. They started weaving between German merchant ships, with German sailors walking around on the decks, but as the visibility was low they paid the British flotilla little notice, most probably thinking they were German ships. Fred watched as the Hardy closed in on some German destroyers, which were docked. They were: Willem Heidkamp (Flagship) Anton Schmitt Hans Ludemann Deiter Von Roeder The Hardy was searching for the Willem Heidkamp, the German flagship in Narvik. Warburton Lee’s objective was to take this ship out first; this would put the Germans on their back foot, damaging their morale. As they got closer the Hardy turned broadside into position and fired two torpedoes at the Willem Heidkamp, they were a direct hit and she went down almost immediately killing her Captain, Commodore Bonte. THEN ALL HELL BROKE LOOSE! The Germans did not know what had hit them, following closely in Hardy’s wake, Hunter and Havock opened up on Anton Schmitt with guns and torpedoes, sinking her, they then turned their attention to Hans Ludemann, badly damaging her, while Hostile scored two direct hits on Deiter Von Roeder. 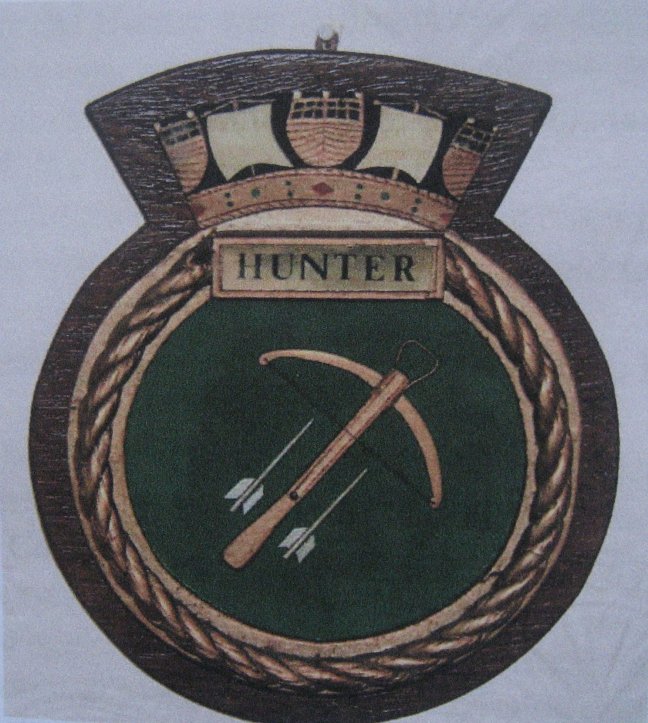 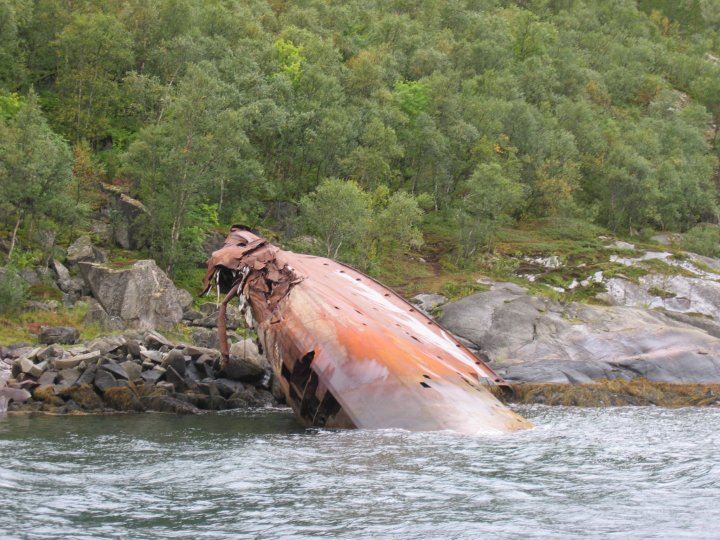 Knowing that they were outnumbered and outgunned, the Hardy turned and took the brunt of it from the German destroyers. Her bridge obliterated and out of control she headed to the far shoreline with her Captain, Warburton Lee mortally wounded. His courageous last words were, “carry on engaging the enemy”. The Hunter was next, hit in the engine room she lost power and due to smoke and poor visibility was then rammed by the Hotspur, disabling her. The Hotspur managed to pull away, she sailed close to the Hunter to try and help shield her, but there was nothing she could do and pulled away leaving the Hunter to take the Germans rage on her own. 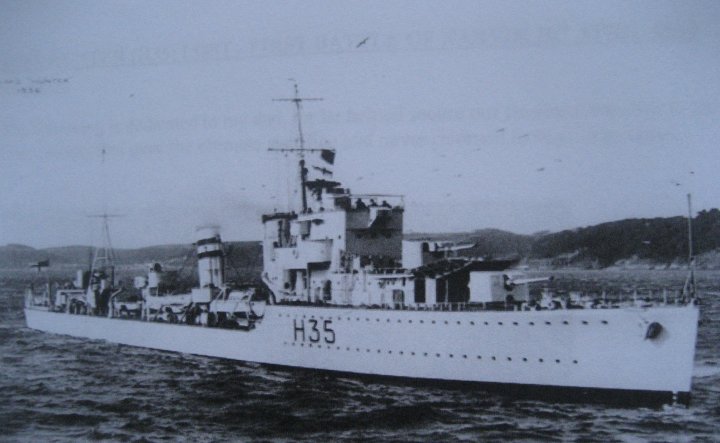 Meanwhile the Hardy was on fire had beached on the far side of the fjord, her crew taking their Captain, Warburton Lee to shore, but sadly he passed away from his injuries, he would later be posthumously awarded the first Victoria Cross of the Second World War for this action. Havock and Hostile had run the gauntlet between the German ships and made it out to the open sea, as did the Hotspur, but the Hunter was a sitting duck with her engine room and propellers damaged! Sat in the middle of the fjord with gunfire and explosions all around, the brave men of the Hunter carried on engaging the enemy with everything they had left, knowing that this was the Hunter’s and most probably their own last moments. 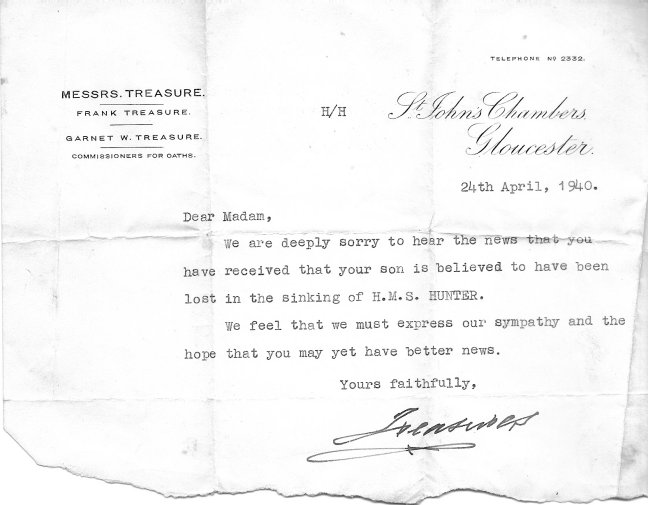 Fred was a gunner and the noise from gunfire, explosions and the echo’s off the side of the mountains made it impossible to think, he once said it was like having your head compressed, you can not think, the training just takes over. One of Fred’s mates came up to him and asked if he could borrow his knife as he had lost his, Fred took his knife out of its sheath and handed it to him. A few moments later there was an explosion, Fred looked over and his friend was gone, this is when he knew the Hunter had to go down, the Germans were not going to stop until she was beneath the waves. Out of ammo, Fred was sat on the deck of the Hunter looking into the freezing water. This is when the order was given to abandon ship. 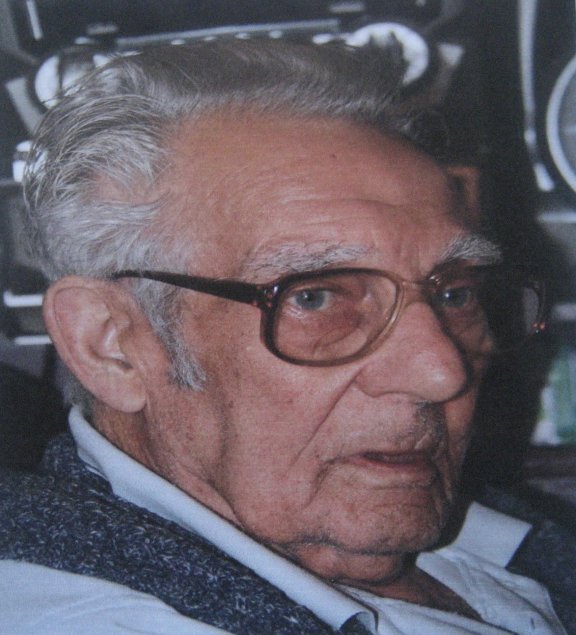 The chances of surviving in this freezing Arctic sea were very slim and Fred could already see bodies floating in front of him, from the smoke and fire their heads blackened and he recalled it as seeing black heads bobbing around everywhere. The Hunter was on her way down, she was listing badly, nearly on her side. Fred was watching her radio mast; it was almost touching the water. Something made him look behind him and the Hunter’s Captain, Linsey de Villiers was walking past. He looked at Fred and nodded as if to say over you go. The Captain then disappeared back inside the ship and was not seen again! Fred took off his boots and jumped in the freezing water! With his senses numbed and with the unfortunate ones floating nearby, Fred treaded water, waiting to either be picked up, or die. He turned to face the Hunter, which was now up on her end, sinking. Every ship has a name or number, the HMS Hunter’s was H35 and Fred was watching this slowly make its way towards the water line. He said that because of the sheer bulk of the Hunter, it looked as if she was sinking slowly, but as the H35 reached the water it disappeared very quickly and within a few seconds she was gone. There was a swell in the water and then nothing; it was as if she was never there. 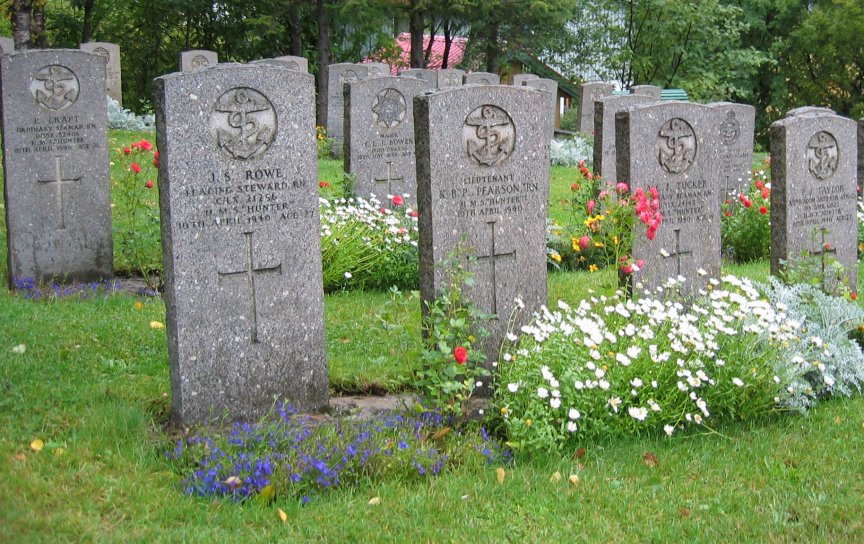 Some of those who died, were buried in a graveyard nearby.

The saddest part is that there were brave sailors trapped below decks, their exits buckled from the explosions and with no way out, they had to go down with her. When she left Plymouth for War, the Hunter had a compliment of 157; only 45 were pulled alive from the freezing Norwegian waters on 10th April 1940 and of these, some would die from exposure and injuries. 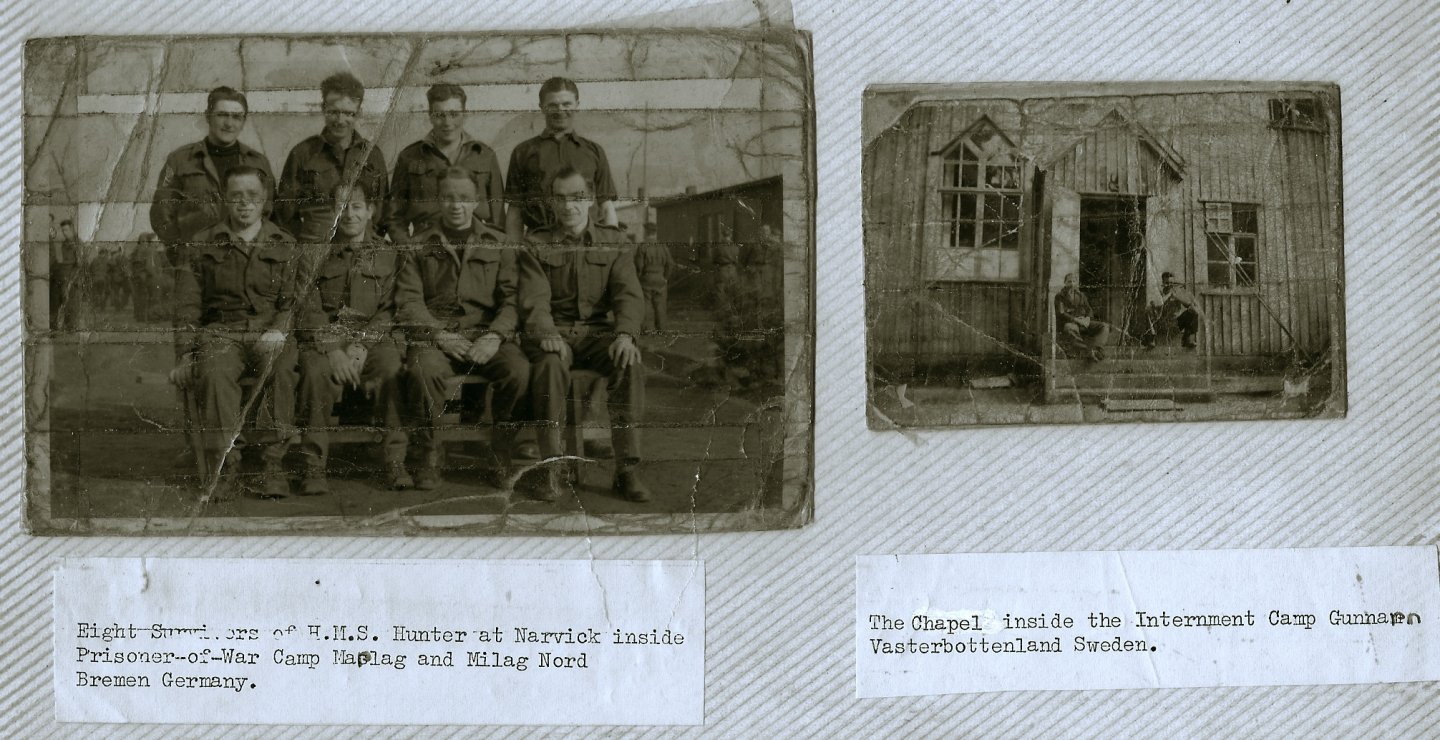 Just when Fred though he would not make it, he was picked up by a German ship. He was pulled from the water and remembers a German sailor walking towards him with a knife; this is when he passed out. When he regained consciousness, he was naked, in a bunk with only a blanked covering him. A German guard offered him some bread, which he took. He was marched on deck and watched as the remains of War smouldered in the fjord. He was freezing, in shock and did not know what lay ahead for him. He was then taken to shore as a prisoner along with the other survivors. The War had just started and Fred found himself in the hands of the enemy, but this would not be the first time he would be captured by the Germans! 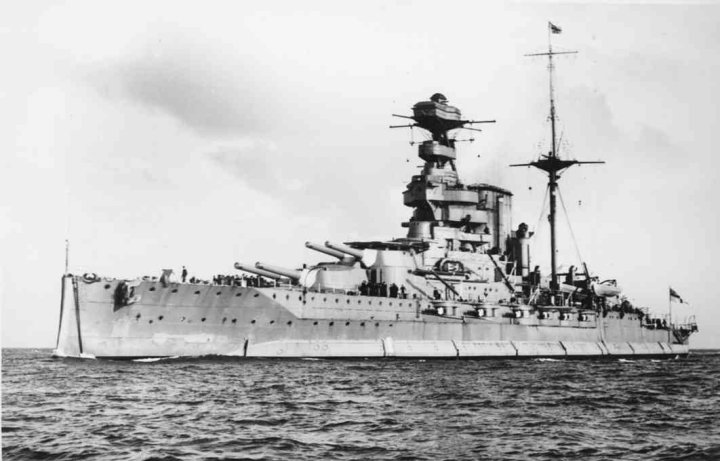 They were marched through the town of Narvik with only their blankets for comfort until they reached a café called Iris, this is where they were given dry clothes and they were guarded day and night, while the Germans carried on with their campaign. On the 13th April 1940, Fred was aroused to the sound of commotion along with gunfire and explosions. The café Iris overlooked Narvik fjord and he could see British Warships engaging the German destroyers, not knowing it, but Fred was witnessing the second battle of Narvik. There was a large British Battleship in the fjord and she was picking off the German destroyers with ease. She was the HMS Warspite, a formidable weapon of the British Navy. The walls of the café shook to the gunfire from the Warspite and it was not long before she and her flotilla of destroyers left, leaving the German destroyers a mangled sinking wreck. The Germans had lost 10 destroyers plus merchant ships during the two battles of Narvik, this would hamper Hitler’s efforts during the rest of the War and even today many still say that the two battles of Narvik gave the British Navy victory in the War. The above is dedicated to my dad, for he helped secure our freedom, but also to the brave sailors that gave the ultimate sacrifice and never returned to their loved ones. Robin Ward