On the first night of the first day of the New Year 2002, the inhabitants of the little Cornish village of Kingsands were rudely awakened by the Police and told to evacuate their houses as quickly as possible. The reason for their haste was the M.V. Willy hard aground just yards from their front doors and carrying a potentially deadly cargo of gas that could ignite at any minute and blow away half of their village.

So how did she get there? On the 30th December 2001 the Willy sailed into Plymouth Sound and proceeded to the Cattewater to discharge her cargo of unleaded petrol. By the evening she had finished unloading and at 2030 she embarked a Pilot and sailed to Cawsand bay to anchor for the New Year Holidays. The following day the wind was NE force 3 to 4. This was unfortunate for the crew as they had wished to carryout the procedure for making the ship gas free. This always had to be done after petrol had been carried, as after it was unloaded the holds would be full of fumes. 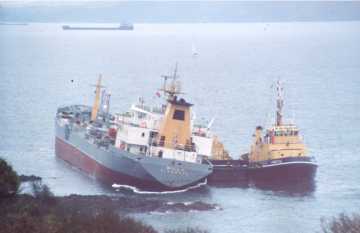 Because the villages of Cawsand and Kingsand were downwind it was decided to delay the procedure until the wind shifted to a more favourable position. As New Year’s Eve approached, the crew left on board didn’t celebrate the festival, but carried on with their routine maintenance chores. As the New Year dawned the wind gradually veered to the south east and increased in severity. Cawsand bay is a good anchorage but provides very little shelter from south easterlies. The ships Master realised that his ship was exposed and stayed on the bridge most of the afternoon monitoring the situation, and making sure his anchor was not dragging.

Unfortunately the Captain didn’t know that when the anchor was dropped, its position was not entered accurately into the GPS Radar Guard System and so the alarm circle was far too large and there would be a significant delay before any drag was detected. As night fell the wind increased and the anchor slowly started to drag. At 2235 the GPS alarm sounded. The officer of the watch, not realising that his ship was much closer to the shore than is instruments indicated, spent a fatal four minutes trying to chart his position before he called the Captain.

As the Captain came to the bridge he immediately ordered the engines started but that took over five minutes and all the while the ship gathered way as the anchor lost its grip. As the engines started the Willy was only 50 yards from the shore. The Captain ordered full ahead and as the throttles engaged there was a loud bang as the props hit the rocks. The ship was hard aground and very soon the waves pushed her broadside to the shore. The ship was badly damaged. Several cargo tanks had been ruptured and the engine room was flooded.

Thankfully there were no casualties, but the crew had to be got off fast because of the risk of the gas exploding. Helicopters couldn’t be used because of that risk, and the lifeboat could not get close enough, so the crew were evacuated by cliff lines and a ladder from the shore. By 0204 on the 2 Jan all the crew were safely off the vessel and a 1000 yard exclusion zone was established around the ship and about 100 people were evacuated from the village of Kingsand.

The firm of United Savage Ltd took on the job of re-floating the Willy, and they moved extremely fast. By 5 Jan the ship was confirmed gas free, all the fuel oil had been removed, and most of the cargo tanks were resealed and pumped full of compressed air. The Willy was re-floated on 11 Jan and taken in tow to Falmouth by the tug Far Sky where she was dry docked and repaired to sail another day.