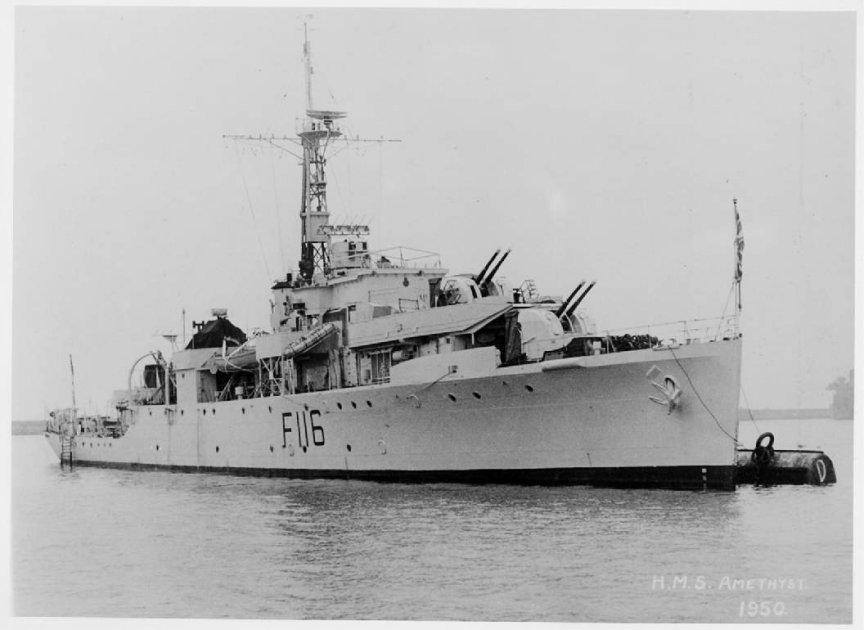 H.M.S. Amethyst was a modified Black Swan class sloop built by Alexander Stevens and Sons in Govern Scotland and launched in 1943. During the Second World War she made her mark by depth charging and sinking U1276. After the war she was re-classed as a frigate, renumbered as F116 and in 1949 found herself based at Shanghai. At the time there was a civil war going on in China between the Chinese Communists and the Kuomintang. The British Embassy was at Nanking, and because of all the fighting H.M.S.Consort was standing by as guard ship. On the 20 April 1949 the Amethyst was ordered to proceed up the Yangtze to Nanking to relieve Consort and prepare to evacuate all British citizens that were being caught up in the advance of the Chinese Communist Forces. She travelled in company with Kuomintang warships, who busily shelled any enemy batteries that they could spot, causing over 200 casualties. According to the Communists, the Amethyst was also firing, a statement that later, the Amethyst strongly denied. In any event, at 0800 hours, a Communist field gun battery on the north bank of the river fired a salvo of ten shells that fell short of the Amethyst and were assumed to be part of the regular shelling of the Nationalist forces on the other bank.

The Amethyst increased her speed and unfurled two huge battle flags to show her identity. The firing stopped, but an hour later as she was approaching Kiangyin further upriver, another battery opened fire hitting the wheelhouse and killing the Coxn. Another shell burst on the bridge, mortally wounding the Captain Lt.Commander B.M. Skinner and injuring the First Lt. Geoffrey Weston. In the ensuing confusion the ship ran aground on Rose Island and as the shelling continued the sickbay was hit, along with the port engine room and the main generator, but not before the injured Weston managed to get of a signal saying that they were aground and under heavy fire. By now the gyro compass was disabled and due to the lack of power the electrical firing circuits were inoperable leaving the Amethyst a helpless target. 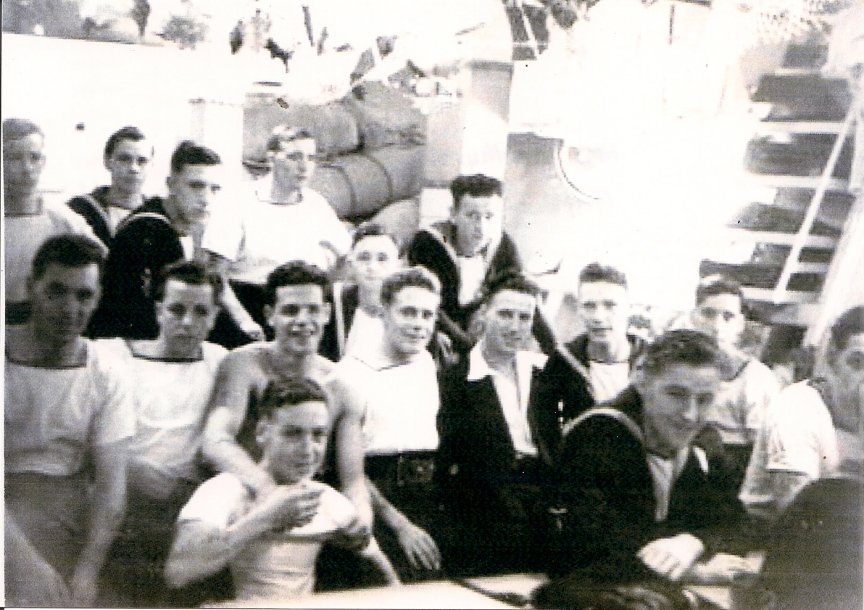 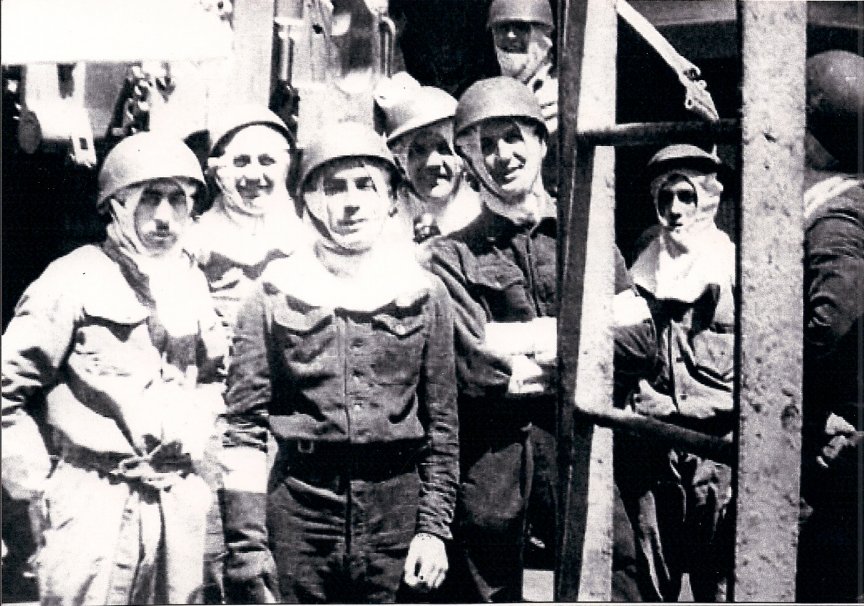 Due to the way the ship had grounded, the two front turrets were unable to bear, so the rear turret fired over thirty rounds at the batteries until it was hit, knocking out one of its guns. The remaining gun carried on firing but Weston ordered it to stop as he thought that might cause the battery to cease firing. It was a vain hope. The shore batteries stepped up their fire with both heavy and light artillery causing more casualties and extensive damage to the ship. Weston prepared for the worst by arming the rest of the crew with rifles and Bren Guns to prepare to repel boarders. 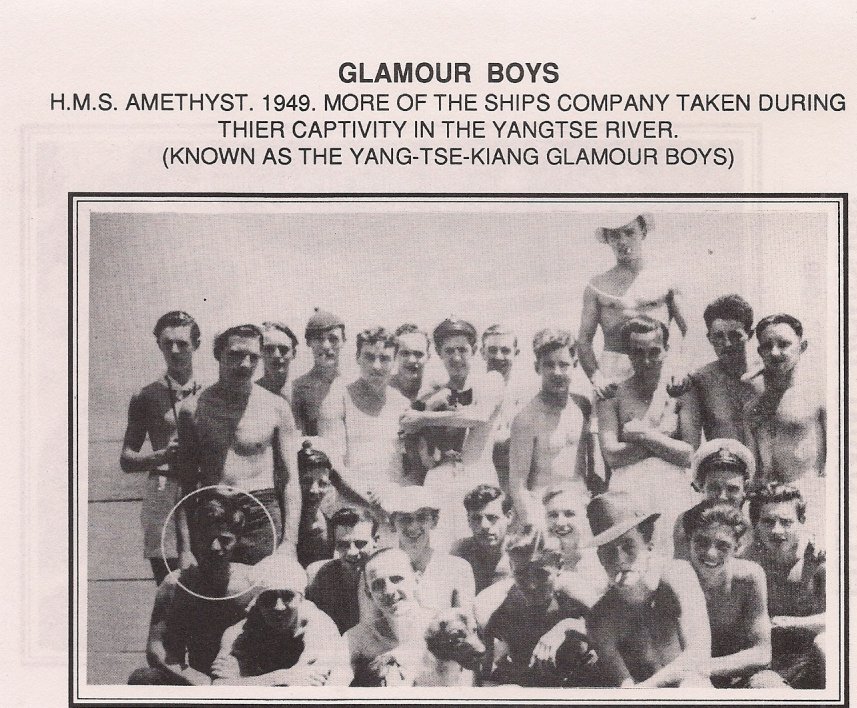 By 10-30 hours no attempt had been made to board the ship, but the shelling and small arms fire carried on unabated. Lt.Com. Weston decided to evacuate as many of the crew as he could to the opposite bank of the river which was controlled by the Kuomintang. Everybody who could swim was ordered over the side, whilst the walking wounded and non swimmers were squeezed in the one remaining boat. Fifty nine ratings and four Chinese mess boys made it to safety, but several more were cut down in the water by machine gun and artillery fire. Those that made it were taken to a Nationalist Hospital and then trucked back to Shanghai. Left on board the Amethyst were forty able bodied men, twelve wounded and fifteen dead. By now the shelling had stopped but everybody had to stay under cover because of the snipers. By the time the shelling stopped at 11-00 hours the casualty list had grown to twenty two men dead and 31 wounded. In all the Amethyst had received over fifty hits mostly below the water line which the crew franticly plugged with hammocks and anything else that came to hand. 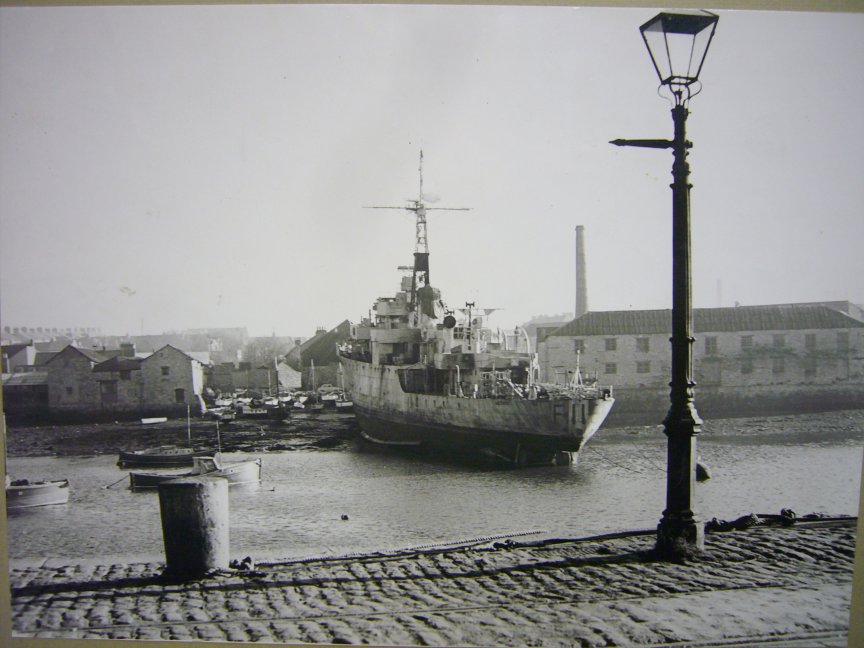 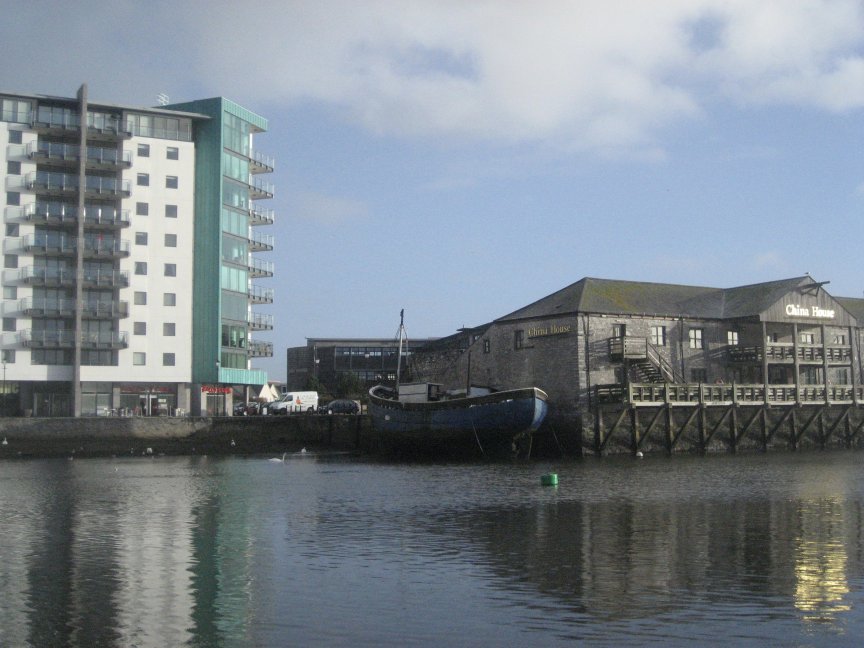 While this was happening H.M.S.Consort was seen steaming towards them at twenty nine knots displaying seven White Ensigns and three Union flags. She came under heavy fire but managed to opened fire and destroy some of the batteries as she tried to take Amethyst under tow. However the heavy shelling made this task impossible, so the Consort had to abandon her efforts and retire having suffered ten men killed and three wounded. 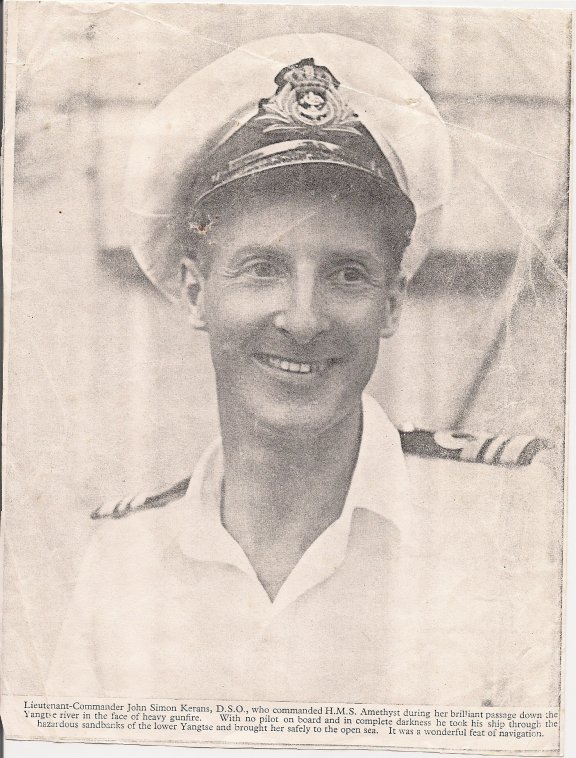 All efforts were now concentrated in trying to get the ship afloat. Everything that could be removed was jettisoned to make the ship lighter, and on April 26, after being aground for six days, the ship was floated of in the dead of night and moved up river to Fu Te Wei. However she couldn’t stay there, so H.M.S. London and H.M.S. Black Swan were sent to escort her down river. Before they got to her, they came under very heavy fire from batteries near Bate Point causing considerable damage to both ships. London was holed in twelve places and lost twelve killed and twenty wounded. Black Swan had seven wounded so it was decided to disengage and return down river to safety. Amethyst removed the worst of her wounded by sampan and went a further ten miles upstream where she anchored and received her new Captain, the British Naval Attache, Lt.Commander J.S.Kerans, who immediately started negotiations with the Communists. These proved largely futile as the Chinese wanted an admission that Amethyst had fired first, which of course the British couldn’t agree to. So months passed while the Chinese took over the whole area, and refused to give the ship and crew vital supplies.

By July things were getting increasingly desperate on the ship and it was becoming obvious that they could all die stuck in the Yangtze, or try to make a run for it. It was a risky decision but on the 31st July Lt. Commander Kerans slipped the mooring cable and slid down the river to start her one hundred and four mile dash for freedom. Running the gauntlet of enemy guns now on both sides of the river she steamed resolutely forward ,streaming black smoke during the worst of the shelling to confuse the Chinese gunners. By 0500 hours she was coming up to the forts that guarded the entrance to the open sea. H.M.S. Amethyst, swept by brilliant searchlights for the batteries on the forts, ploughed on at full speed to the mouth of the river where she met H.M.S.Consort and made her famous signal ‘have rejoined the fleet off Woosung—God save the King.

Nowadays Sutton Harbour is a bustling marina with lots of new waterside apartments and restaurants, and bears little resemblance to the harbour when the Amethyst came to her final rest on Marrowbone Slip. Just a short walk away is the historic Barbican where the Pilgrim Fathers set sail for the New World, and is full of old Pubs and art gallery’s. The fish quay has been moved across the pool near the Marine Aquarium, and with it went some of the character of the Barbican. Still it’s a fine place to see all the boats sailing in and out, and if you walk up the hill, you soon come to Plymouth Hoe with its wonderful panorama of Plymouth Sound. There is so much history here, from Drake, to the Warships still carrying our soldiers to fight in foreign lands. Much has been forgotten, like the Amethyst, but still, a walk around where she was, can still conjure up memories of brave deeds done, and after all’s said and done, that is all that will be left, just memories.

Afterwards refresh yourself in the China House where they have a good selection of photos to show you what the old Barbican looked like.