Aged 92, (2010) Harry Rogers is probably the last remaining survivor from the Hardy. I am very gratefull to his son Tony, grandson Alex, and of course Harry himself for sending me the story and photo’s below. HARRY ROGERS Harry was born on 28 November 1917 in Baxter Street, Middlesbrough, an area which you will now know as Middlesbrough Bus Station. As you can imagine times were hard back then and malnourishment was common. Harry, like most men of the day, ended up working at British Steel from the age of 16. He left British Steel to join the Navy in 1936.The harsh, laborious conditions at the time killed most men before their 60th birthday, so my Grandfather professes that joining the Navy saved his life. Harry joined Devonport Barracks in Plymouth for his basic training as a ‘Stoker’ – Engine Room hand, and on completion of training was selected for a destroyer in the 9th Mediterranean Flotilla – HMS Hardy. 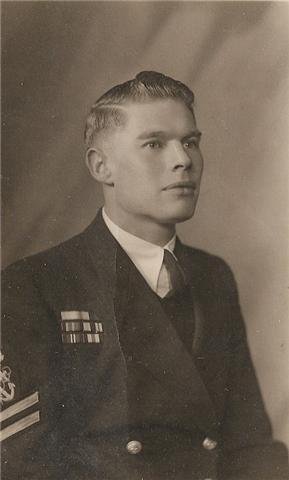 At ‘Action stations’ everyman on the ship had a job, but not necessarily in their core role. In my Grandfather’s case his job was ‘ammunition supply’ to Number 4 turret at the rear of the ship. When Hardy ran aground it was because she’d received battle damage to her engines and steering positions. The helmsman had been killed, and the weight of his dead body slumped over the wheel was forcing the ship to port (the left). At some stage during the battle, my grandfather found himself on the upper deck of Hardy with two other Stokers who were both Chief Petty officers. The Captain at this point had been mortally wounded and Harry, with some others tried to lower the body down from the bridge on to the next deck using a stretcher. They then proceeded to lower the ‘Captain’s Launch’ a small boat on a winch system. To do this the three stokers stood shoulder to should to grasp the long brass handle and wind the boat down. Whilst they were doing this a shell from a German destroyer hit the ship somewhere close to them. Shrapnel from this shell killed the two Chief Stokers outright, tearing into the gullet of one and severing the arm of another. My grandfather felt something ‘bite’ him but continued to try and get the Captain’s body ashore. Within seconds he was in the icy cold water of the fjord. The Captain’s body was dragged ashore but he was considered dead. It was too cold and dangerous to carry him. They agreed to go back for him. 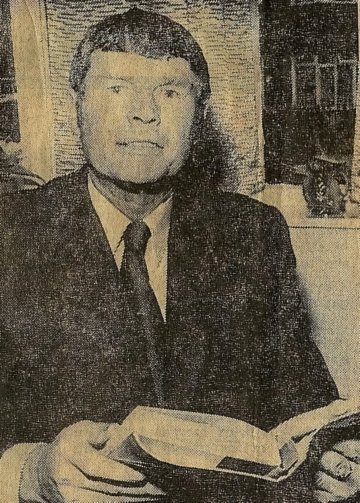 The shore was not far away and Harry was a strong swimmer. He remembers walking up the beach and noticing blood in the snow. Then he realised that the blood was coming from him. He doesn’t remember much after that. He says that he was picked up by locals, as the next thing he remembers clearly, is waking up in what looked to be a school hall being attended to by a local girl. The only way out of occupied Norway by land, was over the mountains into neutral Sweden, but the locals would not take the wounded as they would never have made it. What they did do was fix them with clothes and feed them with whatever little they had. Three days later the Royal Navy battle cruiser HMS Warspite led nine destroyers up the same fjord and defeated whatever German Naval assets were still in the area. The survivors from the Hardy watched with dismay as the British ships departed, not realising that the men in Norwegian clothing waving at them from the shore, were British sailors. Two of the surviving officers from HMS Hardy used a motor boat from a previously captured British iron ore ship to get a message to one of the departing ships. The admiral dispatched two destroyers to return and collect the survivors. Harry was collected by HMS Ivanhoe on 13th April 1940 and returned safely to England. The survivors were taken to Horse Guards where they met Winston Churchill. Harry never made it as he was still recovering from the ‘bite’. 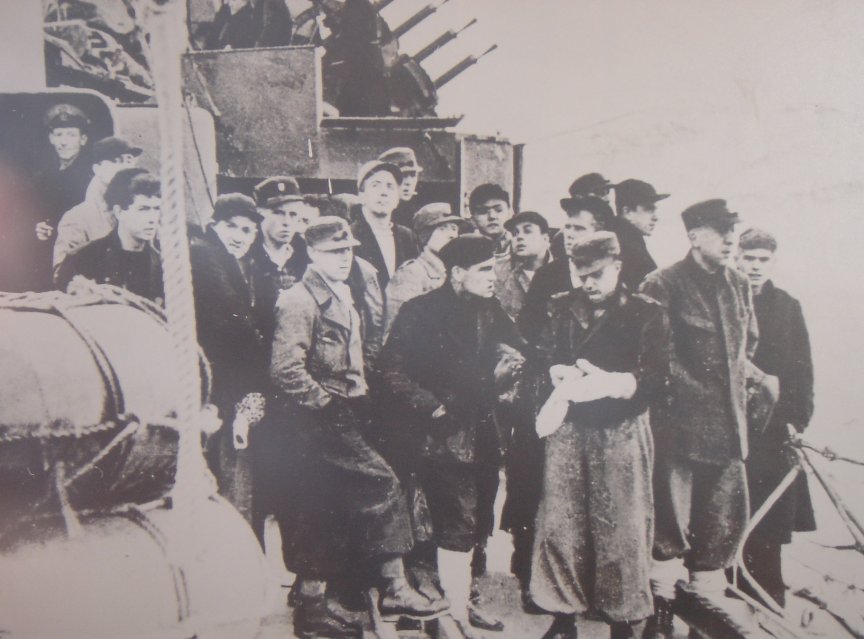 That bite turned out to be a piece of shrapnel about the size of a 50p piece which lodged itself very close to his lungs and heart. The icy water of the Norwegian fjords prevented him from losing too much blood. The shrapnel was too close to his heart to operate the doctors said, yet he made an almost full recovery although he still cannot lift his right arm fully to this day. All this wasn’t enough to stop Harry from leaving the service. On the contrary, Harry’s next ship was the King George the V class Battle Cruiser, H.M.S. Prince of Wales. Harry saw action on this ship against the German pocket battleship Bismark, and was still onboard the Prince of Wales when her sister ship H.M.S. HOOD was sunk by the Bismark with the loss of all but 3 lives – a very famous sinking indeed. In December 1942, in the South China Seas, Harry was still onboard H.M.S. Prince of Wales when it was dispatched as part of force ‘Z’ to the South Pacific. She was sunk by Japanese bombers on 10th December that year. That is another amazing story of survival, in which my favourite quote from my grandfather is that, ‘ he never left the ship – the ship left him’ as he was sat on the keel when it went under. 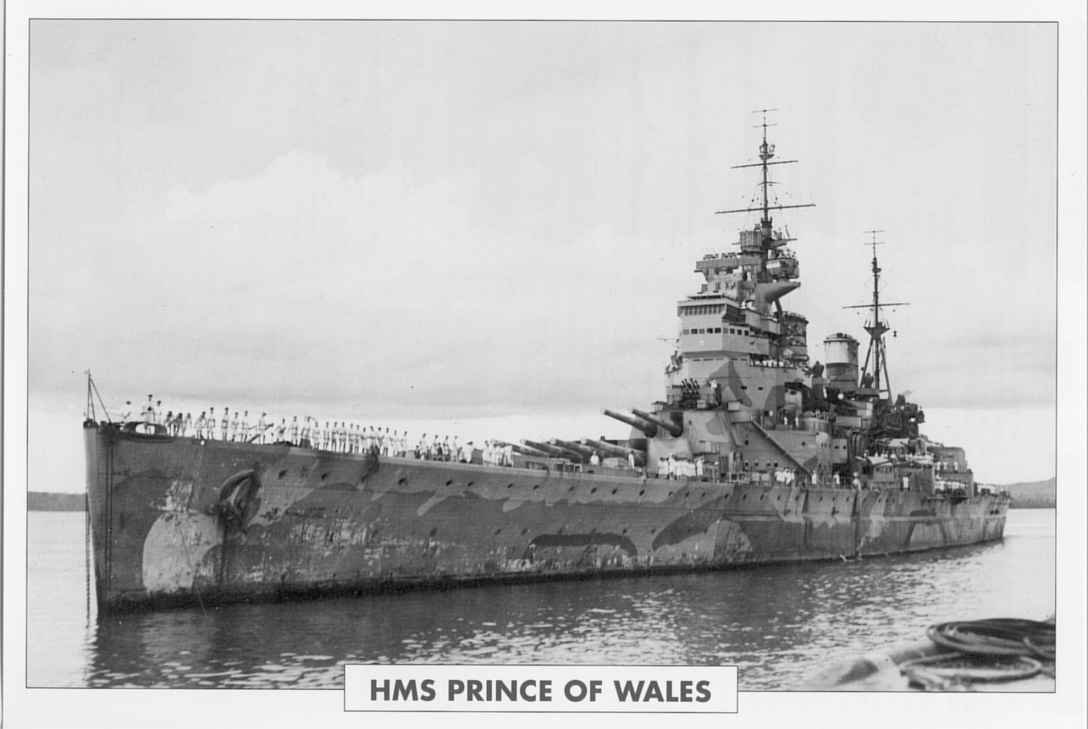 Escaping the island of Singapore before it’s capture by the Japanese, he found himself employed in a variety of vessels until he was posted to the USA to become part of the 20 strong crew of one of the hundreds of Landing Craft (Infantry) built for the Allied landings in Europe. Harry saw action at Anzio – landing the Black Watch Regiment with the 8th Army in the historic capture of the Italian Peninsula (Seen the film?) 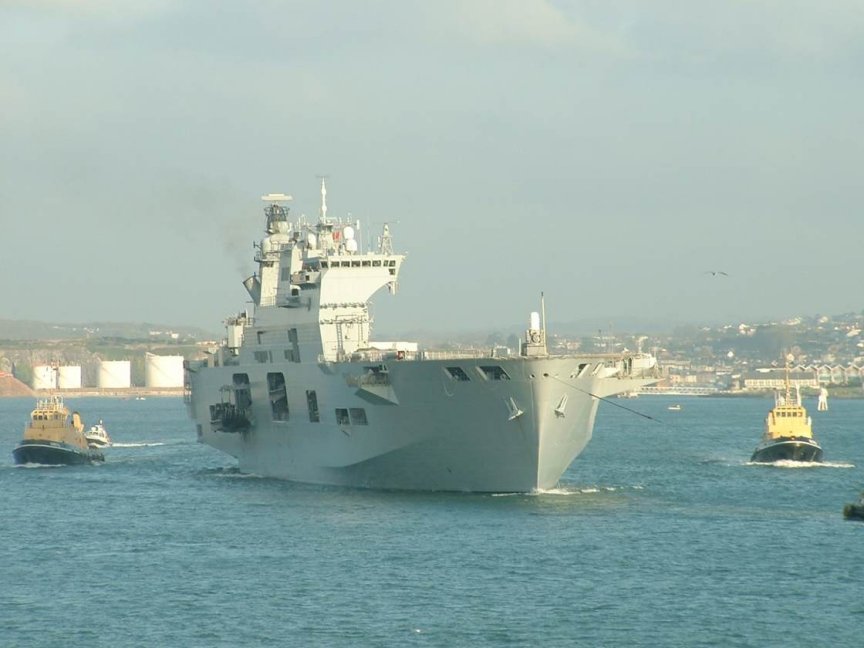 Harry left the Royal Navy as a Chief Petty Officer after 14 years service. Worked as a foreman at ICI until 1979 when he retired from work. 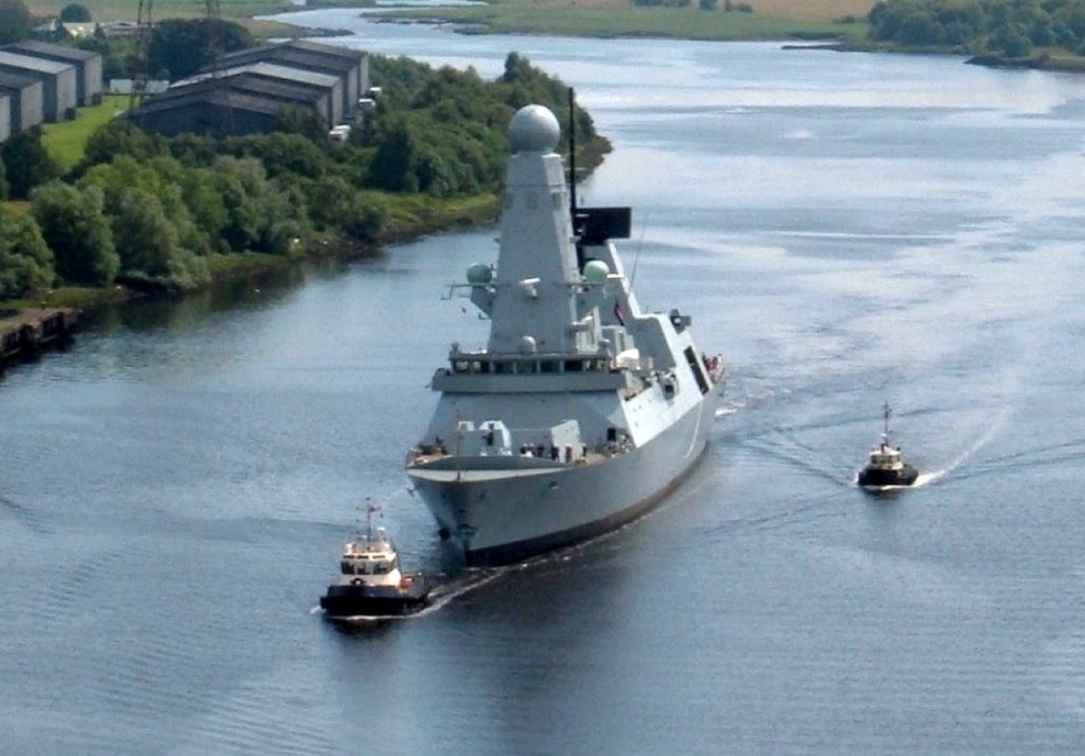 He now lives in Redcar with his wife Eileen, (Who, as many will agree is the reason he’s lived so long). They have 5 children, the second eldest of which also became a Chief Petty Officer in the Navy choosing submarines over surface vessels. Harry’s eldest Grandson, Alex, who studied at St. Mary’s College in Middlesbrough is the 3rd generation to join the Royal Navy only this time as a commissioned Officer. Lieutenant Kopsahilis, joined the Navy 6 years ago afer completing A-levels and is now a fighter controller onboard one of the Royal Navy’s newest warships Her Majesty’s Ship DARING. She’s the first of a brand new class of six anti-air warfare destroyers being built in Scotstoun, Glasgow. 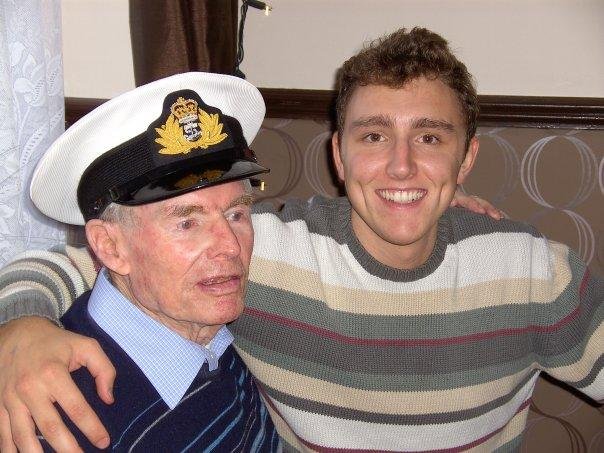 In November 2006 Alex was lucky enough to be drafted to HMS Ocean – A Helicopter Landing Platform travelling to Norway to take part in an annual exercise with Royal and Norwegian marines. Whilst there, he stepped ashore and visited the the Museum at Narvik where he found lots of articles from the ship including a photo of the survivors in which his grandfather was present. He also mentioned the story to the ship’s Chaplain who arranged for a service of Remembrance to be carried out at the cemetery where the sailors of that battle were buried in the nearby village of Ballangen. It was quite moving to be able to lay a wreath on the Grave of his grandfather’s old Captain, Bernard Warburton-Lee with a personal message from Harry. 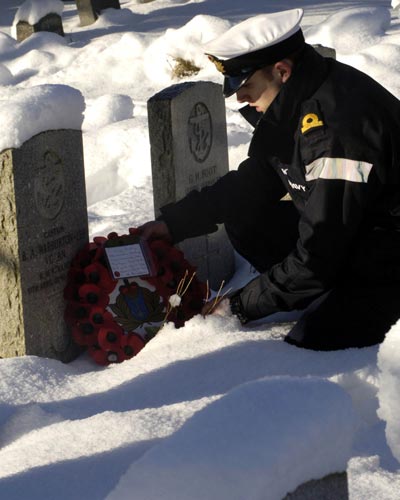