Gull Rock to the east of Falmouth in Veryan Bay, sticks out of the water like the hump of a Sea Dragon. It is so prominent that you would think that it would be easy to avoid. But the sea always lays traps for the unwary, and on the night of 1st of February 1914 Gull rock claimed a victim, the German steel barque Hera. 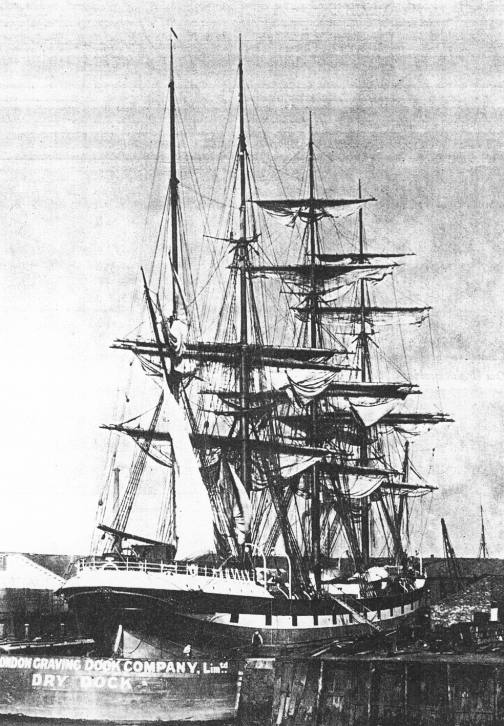 Originally a British owned vessel called the Richard Wagner, the 1994 ton Hera was owned by Rhederei Aktien of Hamburg, who also owned the ill fated square rigger, Pindos wrecked on the Manacles in 1912. On that February night the Hera was 91 days out of Pisaqua loaded with Chilien nitrates, and closing the Lizard. The weather was rough with a gale blowing, and Captain Lorentz was unsure as to his exact position. He thought to sail slowly into Falmouth bay and pick up the flash of either St. Anthony’s light or the Lizard. As dusk fell the weather steadily worsened and as the hours passed they still saw no shore lights. At about midnight the second mate reported land ahead. Captain Lorentz ordered the Hera put about, but the ship was slow to answer the helm and seconds later the Hera was impaled on Gull Rock about a quarter of a mile off Nare Head. 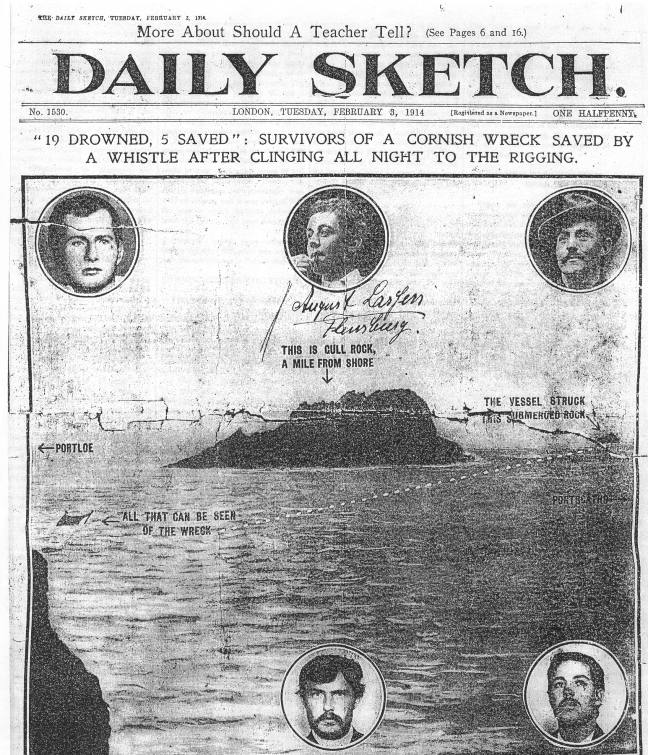 How the news hit the Headlines.

Distress rockets were fired and lifeboats manned, but the ship suddenly rolled forwards and as she settled by her head, the port boat capsized and Captain Lorentz and three men disappeared. After an attempt to free the starboard boat failed the Chief Officer led the crew up into the rigging to escape the seas that were now sweeping over the boat. 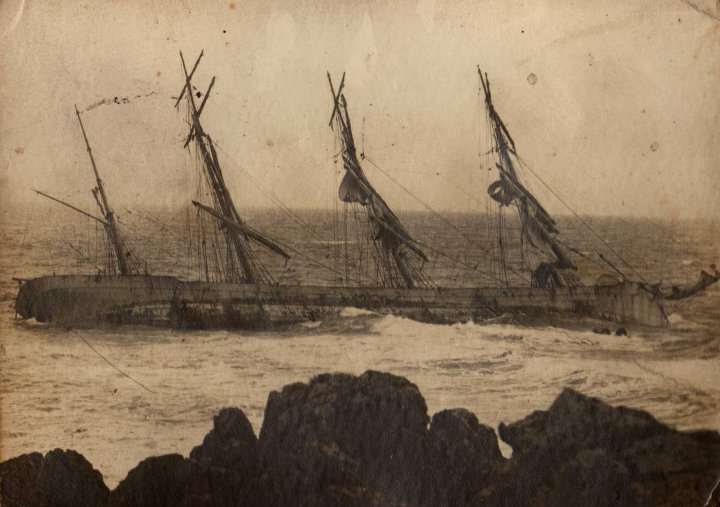 The Hera impaled on the rocks. Photo Paul Thomas.

As the Hera sank deeper the crew had to climb further up the rigging and soon they were in a dreadful state. Cold and exhaustion soon carried of the Chief Mate and shortly after the Second Mate, Peterson also gave up and slipped into the sea. Before he went he passed over his ships whistle to one of the seamen just above him on the mast. 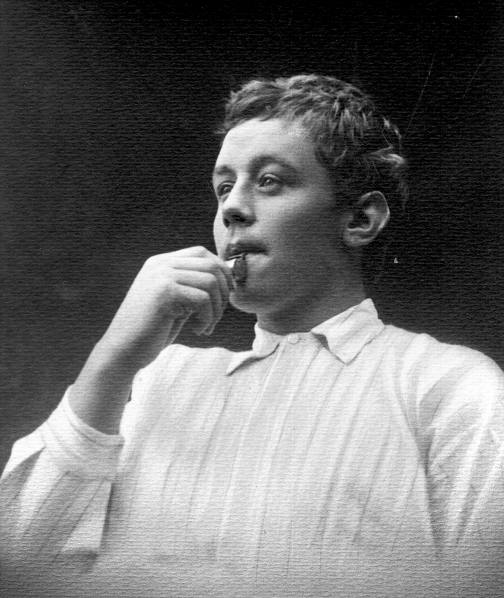 August Lassen, the boy seaman who blew the whistle.

By this time only five men were left, and they were trapped halfway up the rigging of a sinking ship swept by freezing seas whipped up by a fierce gale. They had to endure these terrible conditions for another two hours before the Falmouth lifeboat finally hove into view. One of the able seamen, his hands so frozen that he could hardly hold the whistle, blew and blew until the lifeboat men heard the shrill sound just barely audible above the howling wind. With the whistle to guide them the cox’n managed to coax the lifeboat alongside the wreck of the Hera and pull the five exhausted crewmen to safety. Nineteen men died that dreadful night and their remains were buried in Veryan churchyard.(see Tombstones sectionHera) 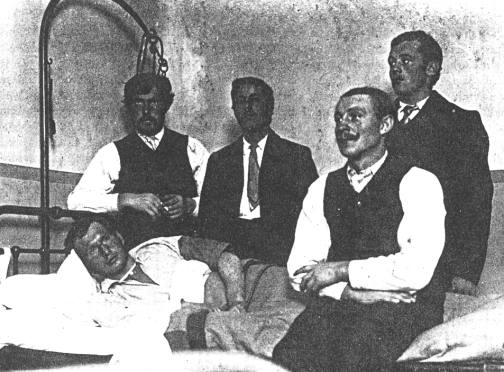 Today the Hera lies well broken up and scattered on a rock and sandy bottom in about fifty feet of water. It is a very pretty dive with most of the metal spars and plating covered in beautiful plumose anemones. There is plenty here to see and lots of fish life especially large Pollack and a rather large orange coloured starfish. 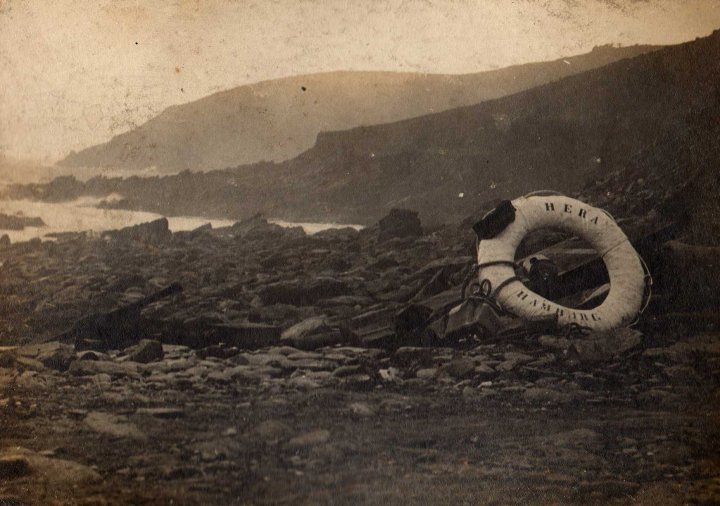 The highlight for me was part of the upturned hull of the ship. This has formed a sort of iron cave, which you can swim into. Here lurk large Pollack some bass and a small conger. Light filters in from holes in the plating lighting up shoals of small fish and makes the whole experience quite surreal. With winter storms the sand can pile up and almost block the entrances to this cave but usually they are quite clear. 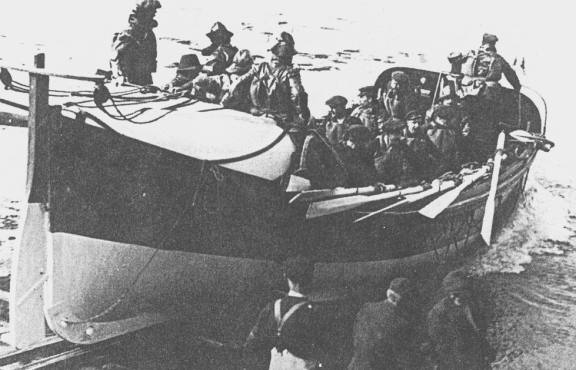 The lifeboat crew to the rescue.

Some of the mast stumps are still to be seen, and although the wreck is well broken up it is still possible to identify what bits you are swimming over. The Hera is a surprisingly compact wreck so there is not much chance of getting lost. But it is very picturesque, so you can stay down a long time, especially if you have a camera.

Listen to this great song about the Hera

Thanks: I am indebted to Ute Lassen for some of these photographs, especially the lad with the whistle who was her Grandfather. I would also like to say how gratefull I am to Paul Thomas for the photographs of the wreck, and the wonderfull story below, of his Great Grandfather William Leuty, who was part of the lifeboat crew. 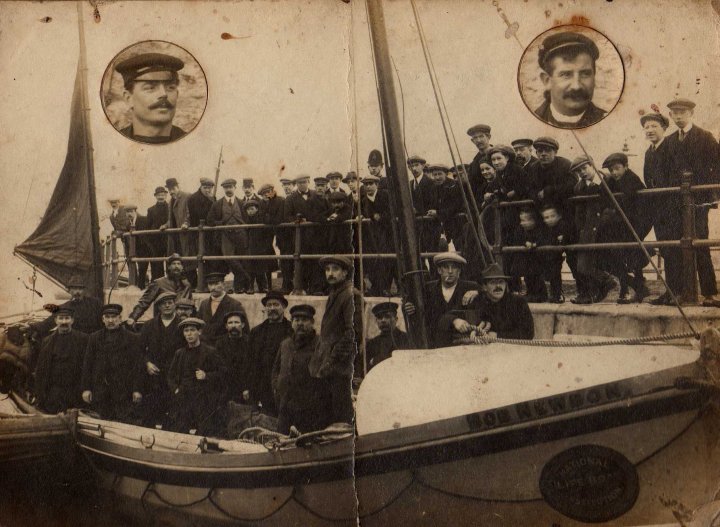 William Leuty was one of the crew of the lifeboat Bob Newton who went to the aid of the stricken Hera. When the lifeboat arrived alongside and found the crew clinging to the masts, Willie Leuty dropped the anchor. As he did so the chain rolled over his hand and severed two fingers. Willie was so cold that he never realised what had happen until he got back home and took of his cloves. Two fingers rolled out. This wasn’t the only shipwreck that William endured. During the First World, William was conscripted into the Devon and Cornwall Light Infantry. In July 1915 he found himself embarked on the steamer Royal Edward en-route to the Dardanelles. On 13th Aug, as the ship was steaming in the Mediterranean, it was torpedoed by the German submarine UB14. Within three minutes the decks were awash, and after six minutes the ship completely sank . Of the 1586 people on board less than 500 were rescued. William Leuty however, survived the dreadful sinking and became something of a hero by helping to cut free one of the lifeboats, so that it fell into the water thus ensuring that many other people were saved. William survived the Great War and became a licensed boatman in Falmouth. I am grateful to Jill Tremarkyn for the information below, and for the wonderful painting of the Hera My grandfather, Ashley Hearle received a message to go to the Nare Head with the rocket life-saving equipment ie breeches bouy to help with the rescue the crew of the Hera on 30th January 1914. This was all done with a team of horses from his farm and men from Gerrans and Portscatho. He told many times how the screams of the dying men haunted him for the rest of his life. 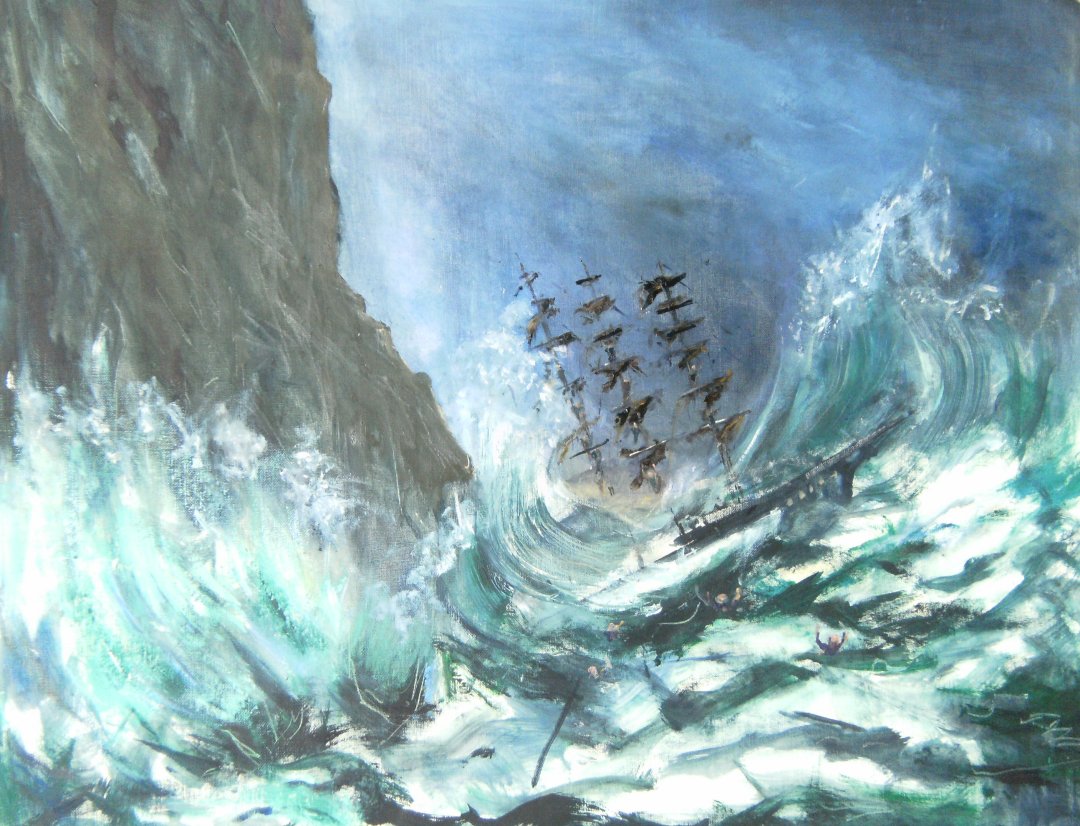 The wreck of the Hera courtesy J. Tremarkyn.

You can see more of the grave, including old photos and a great inscription by clicking the link below.