I met Diana Woolner back in 1997, and although she was in her eighties, she was a sharp as a tack and very charming. At first she declined to be intervieved, but after chatting to my wife, changed her mind and let me film her as she spoke to us. Her eyes sparkled as she told us the tale, and it was obvious that her memory was as clear as if it had happened just yesterday instead of all those years ago. She even remarked on the fact that when they went back to the wreck to collect personal belongings, the sea was so flat and calm that she could see the marble blocks from the wreck of the lying on the sand twenty feet below.

Diana lived in Bradley manor which she had given to the National Trust back in the thirties and we had a lovely time looking around the house which dates from the 15th century. As we were about to leave her Daughter came out and said that Diana wanted to show us something else. In the back pantry was the ship’s wheel from the Hertzogin Cecilie. 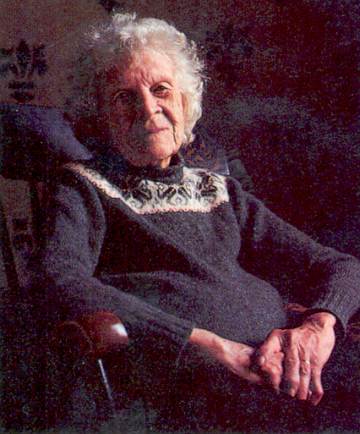 Sadly Diana passed away a couple of years later but not before she had seen the remains of the Hertzogin Cecilie lying on the seabed. Our team had videoed it a year or so before and it featured in the Devon Shipwreck video.

Soon we will be able to get the interview in full with video and sound onto the website, but untill then here is Diane Woolner’s own account written by her. Enjoy.

One fine morning in April 1936 I received a telephone call from an old school friend. She was now married to a sea-captain commanding one of Gustav Erikson’s fleet of great sailing ships that yearly brought corn from Australia in the “grain race”. Sven Eriksson (no relation to the owner) came from the Aland Islands in the Baltic Sea. and although now subject to Finland, the sea-faring islanders claim to be the true descendants of the Vikings. Pam Eriksson, who sailed with her husband. was herself an experienced hand, and loved his beautiful four-masted barque almost as much as her husband did. 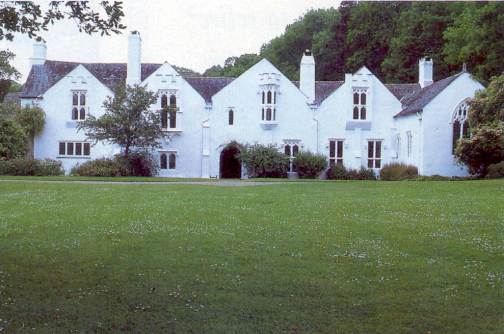 The Erikssons invited me down to Falmouth, where they had just arrived from Australia, for a few days holiday ashore. So to Falmouth I went. They met me an the quay with the news that Sven had received immediate sailing orders for Ipswich. Our little holiday had to be cancelled. but since I was there why not come with them. as their guest to Ipswich? Thus it was that I came to be a passenger on what was to prove the last voyage of the Herzogin Cecilie. Pam took me to my cabin and gave me a pair of her serge trousers and a thick white sweater of her hustand’s. “Change straight away” she said “Sven will not have any woman on board in skirts. He says it is "not fair on the Finnish boys”. This referred to the youths from the mainland learning their trade in sail. 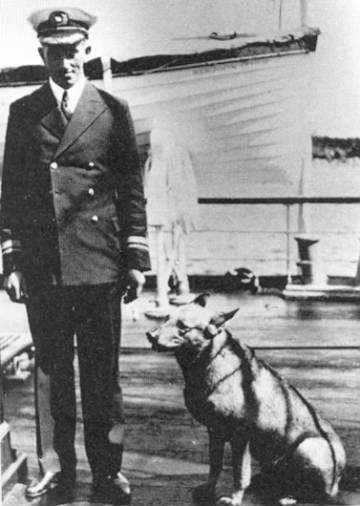 Next I was introduced to Paik. Paik was a very formidable alsatian that Sven had taken some years before when his former owner could not marage him and feared he would have to have him put down. He adored Sven but only tolerated Pam. Paik was standing in the door of his master’s cabin; Pam had to call “Sven. we want to go into the cabin: speak to Paik!” But once Sven had introduced me all was well. After the wreck the R.S.P.C.A. took Paik away in a crate; what they made of him in the quarantine kennels I have no idea, but he was reunited with his beloved master on the family farm in the Aland Islands and became the devoted bodyguard of the baby Sven who was born not so long after these happenings. Before going to bed Pam took me on deck. She said “‘You must come and see, it is so beautiful.. The night was fine if a bit misty, there was a gentle swell, and I had that one brief experience of the stillness, the beauty of the huge sails above us, the gentle sound of the water along the ship’s sides. I could even believ’e that in this ship I might not be seasick; no smell of oil,. no throbbing engines, and a feeling that the ship was moving naturally through the water. I was tired, the sea air made me sleepy; I slept soundly. 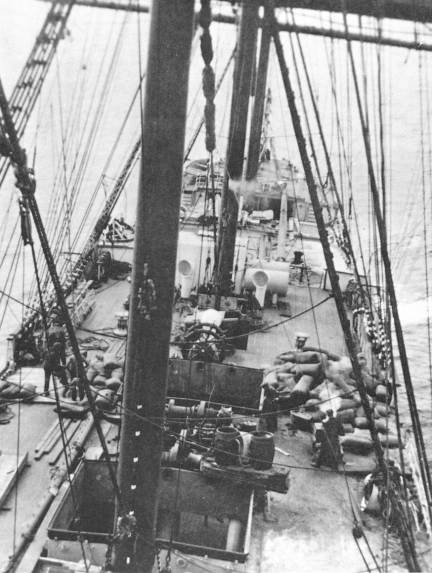 The rotting grain being removed from the wreck.

Pam shook me awake. “Get up quickly and put on warm clothes. we’ve hit something”. She then took me round the cabins and we tied all the men’s personal possessions in blankets to be put in some place of comparative safety. Pam said “These little things mean so much to them. they are away from home for so long”. I was again taken on deck, but now all was different. It was still dark and there was a thick fog; the smooth strong motion had gone: there was a sickening jolting as the heavy swell carried the now helpless ship further on to the rocks. Sven appeared out of the night; he took me and bade me sit on a large wooden hatch cover and to stay there. As the sky lightened I looked up and saw the mass of spars and rigging, black against the grey, shaking and shivering with every shock of the hull grinding on the rocks, as slowly the helpless ship was being carried broadside to the foot of the cliffs. She had no auxiliary engines and no wireless equipment whatsoever. 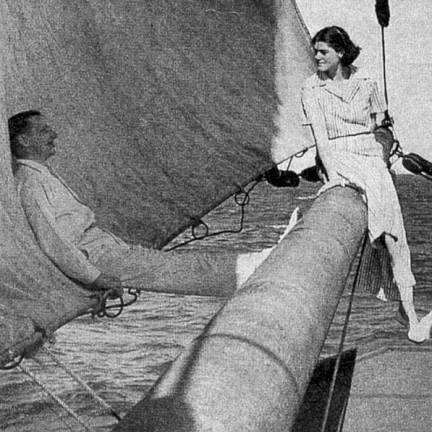 Coastguards appeared on the cliffs above us and I learnt afterwards that a line was fired over the ship, so that a breeches-buoy could be secured to one of the masts. Sven led me to the foot of the ratlines and bade me look up. “Could you climb up there if you had to?” he asked me. I looked; an interminable black Jacob’s ladder ascending into a very grey heaven, but after all it was only a ladder. “Yes” I said, “I could if I had to “. That satisfied him. Then he said “Come with me”. He took me into the chart house and said “I want you to see this”. He showed me the chart with our course marked upon it. He showed me how we should have been miles out in the Channel, he showed me where, having a hunch that we were too near the coast, he altered course out into the Channel still further. Yet here we were on the cliffs. The mystery has never been satisfactorily cleared up; and there was a lesser mystery: no one that night ever saw the Eddystone Light though we must have passed very close indeed to that famous rock. 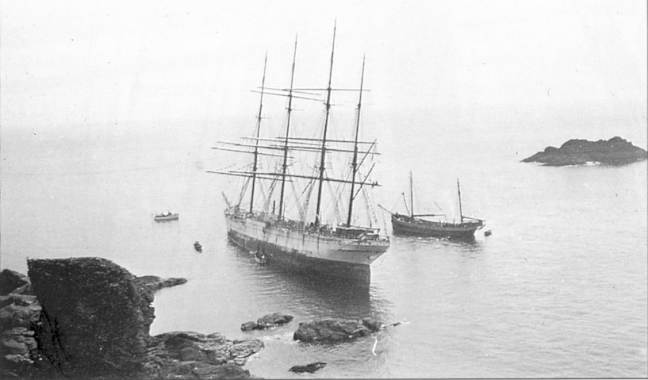 Collecting belongings a day or so after the wrecking.

Finding that we were in shouting distance of the coast guards on the cliffs I asked where we were: “On the Devon coast” they said. I knew that but everyone thought I had come from Australia, and couldn’t understand that I wanted to know exactly where we were. At last one of them said “Halfway between Bolt Head and Bolt Tail”. That was what I wanted to know; it was somehow comforting to hear that I was only about 30 miles from home. As Pam and I were standing on deck watching water rising in the waist of the ship, now stuck fast on the rocks, when one of the men came plunging through the water stark naked. He had forgotten there were ladies on board. Overcome with confusion he vanished as suddenly as he had appeared. I think he had been sent by the Captain to slaughter the chickens to save them fro!n drowning miserably. Poultry were carried on these long voyages for fresh eggs and they also carried a pig for fresh meat: but they had eaten the pig before reaching Falmouth so piggy’s carcase didn’t go to feed the fishes like the poor hens. 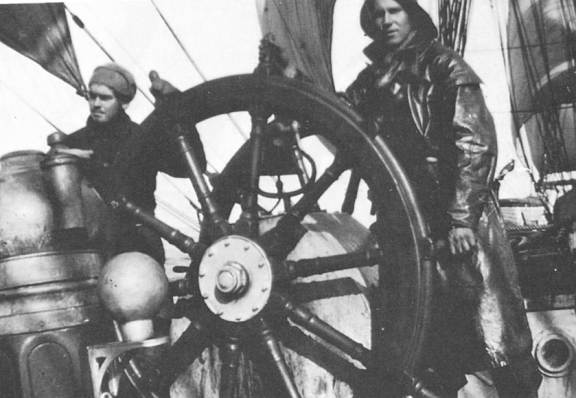 This wheel is now at Bradley Manor.

When the lifeboat came I think Sven was heartily glad to be relieved of the responsibility for his “passenger”, and I was unashamedly relieved to be leaving a scene so strange and so uncomfortable. One of the mates who was on crutches, having injured his leg on the voyage over, was also sent ashore, much to his disgust, and all the Finnish boys came too. At the last minute someone handed my bag of knitting down into the lifeboat.The motion of the lifeboat was abominable; I was very sick right into a lifeboatman’s yellow oilskin sou-wester. 1 felt bad about that, and I hope he bore me no grudge. At Salcombe we were met by the representative of the Shipwrecked Mariners Society who arranged everything for us admirably.

At last 1 could get to a public telephone when 1 had made it understood 1 had not come from Australia, but lived at Newton Abbot and wanted to reassure my Mother before the news broke allover the country. Pamela Eriksson wrote the whole story of the ship in a book she called “The Duchess” (Herzogin means Duchess) where may be read an account of all the salvage attempts and the final abandonment of the hulk after the charming figurehead, all the fittings of the Captain’s cabin and much else had been taken to the Nautical Museum at Mariehamn in the Aland Islands. As the life-boat drew away from the tragic ship I looked up at the sad face of my school friend. Many people were surprised that she stayed on board with her husband, but anyone knowing Pamela Eriksson would have been very suprised if she had done otherwise.