In 1782 the Royal George capsized at Spithead and sank with the loss of nine hundred men women and children. All salvage attempts on the ship failed so she was left to rot. Now fifty years on the wreck had become full of silt and mud and was proving to be a bit of an obstruction. Working on her at the time were the Deane brothers, Charles the eldest, and John. Since 1832 they had managed to recover three bronze 18 pounder’s, nineteen bronze 24 pounder’s, and eight 32 pounder’s. The Admiralty was only paying them half of what the guns were worth but the Deane’s were after the contract to blow the wreck up, so suffered the low fees with good grace. 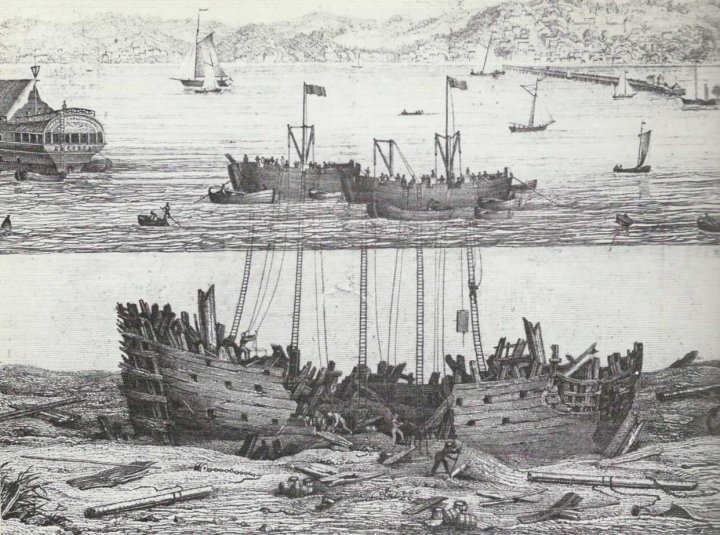 Working on the Royal George.

The Deane brothers were by now extremely well known as they had invented the first really practical diving apparatus which almost any one could use. John had had the idea when he was passing a farm with a barn full of horses on fire. The farmer had a pump and a small hose which hardly let out any water, and the smoke was such that no one could get into the barn. Rushing into the farm house to find some buckets, he came across an old suit of armour. Suddenly inspired, he grabbed the helmet and rushed out to the fire, pushed the farmer out of the way and shoved the hose into the helmet. As the hose could pump air as well as water John was able to breathe fresh air and enter the barn and save all the horses. John was all of eighteen at the time. The two brothers secured a patent on ‘an apparatus to be worn by persons entering rooms filled with smoke’ and thought that their fortunes would be made. 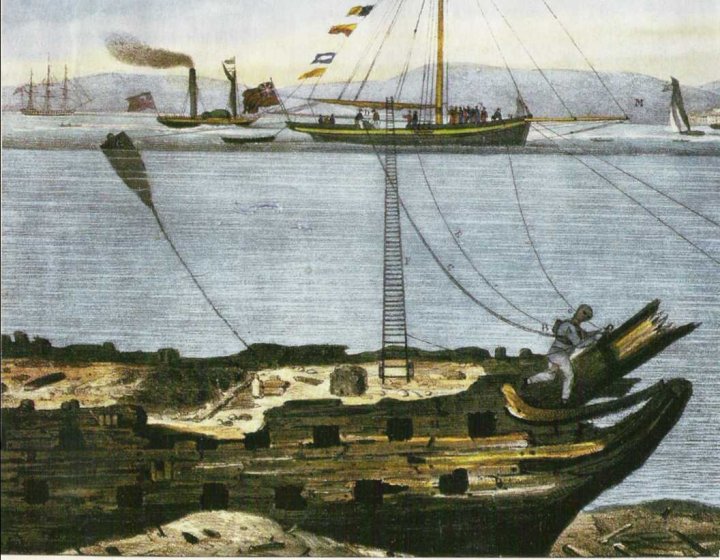 John Deane at the bow of the Royal George.

The apparatus consisted of a lightweight copper helmet with a short breastplate riveted to a leather jacket. The helmet had three glass windows and a vent to allow speech. Two hoses were fixed to the helmet at the back, one supplying air which was pumped in by bellows and the other hose ran down the body to the ankles to take away the exhaled air. When the Deane brothers took their invention to the Fire Insurance Companies and the Admiralty they were shown the door. Nobody was interested. This was a serious setback, but John suddenly had a brainwave. If the helmet could be used in smoke filled rooms then it should be capable of being used underwater. At the time most salvage work was done with diving bells and they were extremely cumbersome. However diving bells were all the rage because of the exploits of the young Isambard Kingdom Brunel who had made a series of dives to the bottom of the Thames to try and find out why the tunnel his father was building at Rotherhide kept flooding. 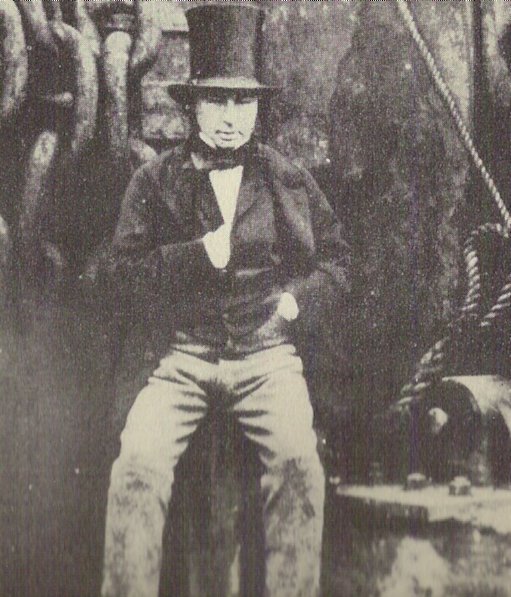 But imagine if the diver was free to just go just where he wanted and in relative comfort.It would be so much more efficient and people would queue to buy the helmets. The Deane brothers set too and modified their smoke hood but the results were not promising, so they redesigned the whole thing, and by 1828 had it more or less perfected. The helmet was now much heavier with narrower windows and the corselet was married to a short sleeveless jacket. The helmet now had only one hose supplied by a pump instead of bellows and the exhaled air bubbled out around the bottom of the jacket. Essentially it was a personal diving bell. Because of the need to keep warm and dry, Deane designed a waterproof one piece suit that the diver clambered into through the neck, the excess material being tied off. As long as the helmet was full of air no water could seep in through the neck. Bandages around the wrists stopped water getting in there, and lead weights slung around the chest stopped the diver popping up to the surface. When all this was finished, John and Charles became in effect the first professional hard hat divers and were soon extremely busy salvaging all sorts of ships and their cargo’s. 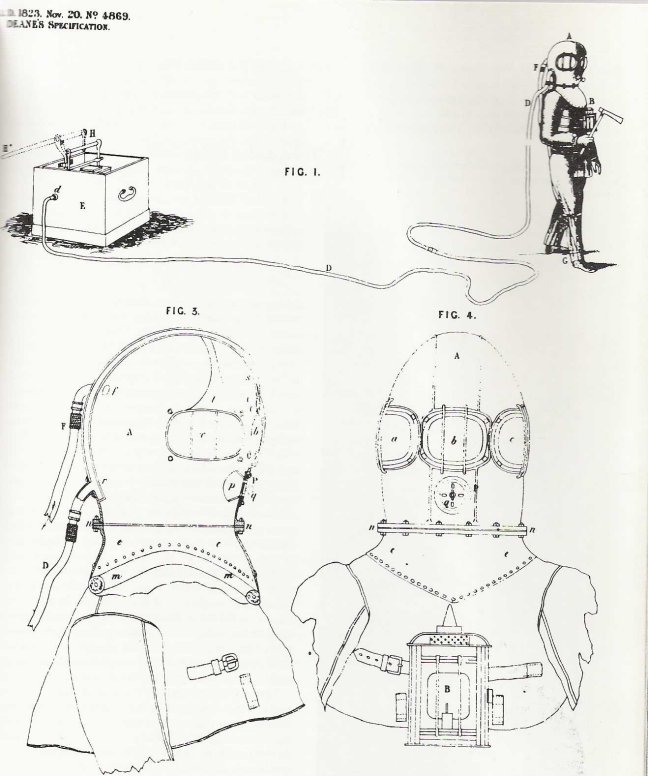 Soon their diving helmet was attracting a lot of interest and Deane teamed up with Augustus Siebe a Prussian engineer who had set up in London as a precision machinist. He made the helmets and John wrote out the instructions for their use. ‘A person equipped in this apparatus being enabled to descend to considerable depths, from 20 fathoms(120ft) to probably 30 fathoms(180ft) and to remain down several hours having the perfect use of his arms and legs and is freely able to traverse the bottom of the sea to seek out the hidden treasures of the deep.’

Over the next few years the Deans were kept very busy, and it was whilst salvaging cannon from the Royal George that they made another discovery, the wreck of the Mary Rose. Whilst they had been working down below a fishing smack had got her lines entangled on an obstruction quite near the Royal George. Deane went down to have a look and there he found another wreck with a large bronze cannon. When this was lifted it had this inscription on it that showed it was a bronze demi cannon cast by an Italian foundry in 1542 for King Henry VIII. The Deanes brought up many more cannon with Tudor Roses on them and lots of artefacts, but it cut no ice with the Admiralty. 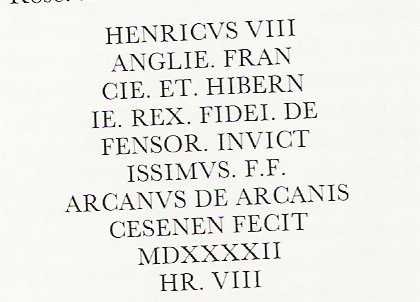 The Inscription on the Gun

Whilst they had been busy lifting cannon others had been stealing a march on them. The job of blasting the Royal George went not to the Deane’s, but to Charles Pasley a Colonel in the Royal Engineers. One of the reasons that he got the job was because he had a much better diving suit that the Deane’s. John Deane’s suit suffered from a major drawback, in that when the diver bent down he was in danger of getting the helmet flooded. Augustus Siebe had been experimenting with a new design and by 1837 he had perfected the first closed diving suit. He made his helmet in two parts the main part of the helmet separate from the corselet. The suit was clamped to the corselet by bolts thus making a water tight seal and one the diver was inside the helmet was screwed on. Fresh air was pumped from the surface and the exiled air vented through a valve. It was far superior to the Deane brother’s suit. 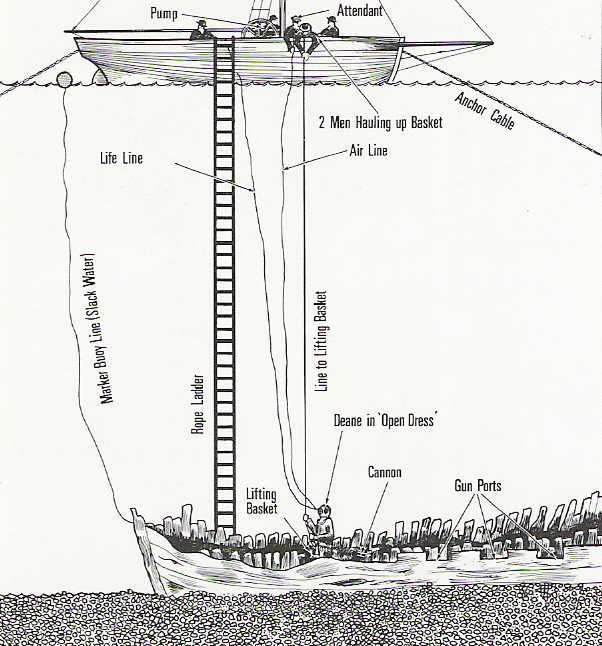 Deane in the new Open Dress

While Charles Deane furiously argued his case to the Admiralty, Pasley was getting ready to blow up the Royal George with two tons of explosives. As the wreck was scattered to pieces on the sea bed a plume of water shot high into the air taking with it any hopes John had of the Admiralty ever adopting his suit. Augustus Siebe got the contract and his diving suit was adopted as the standard equipment for Naval divers and remained so in almost identical form for the next 150 years. 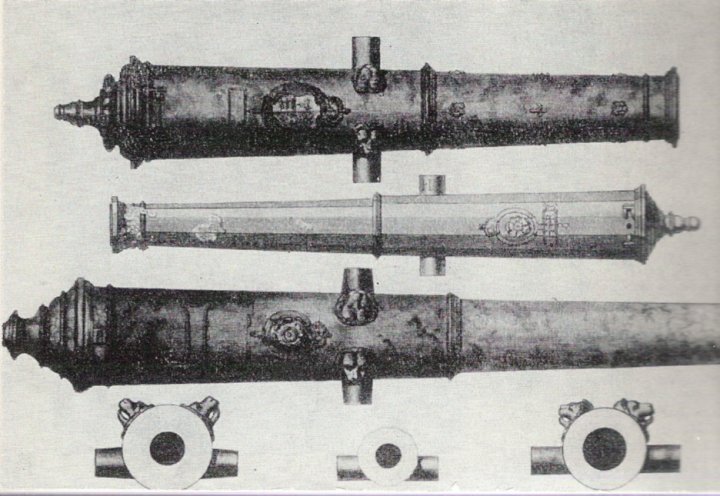 Deane’s watercolour of some of the cannons he found on the Mary Rose.

So Siebe won the contracts and the glory, John became Britain’s most eminent underwater engineer, and Charles Deane went mad, the result, so the Morning Chronicle said, of over taxing his brain with study. Over the years Deane became forgotten, and this was a great shame. Besides salvaging all these wrecks John Deane realized even then, that all this stuff had some historical importance and started to write a book describing his adventures and illustrated it with beautiful watercolours and drawings. Alas the book was never published, the manuscript was lost, and the water colours dispersed amongst his family. However some still remain, and can be seen in Portsmouth Museum.