The Kantoeng, at the time she was launched on 22nd of December 1936, was the largest bucket tin dredger in the world. She was built in Schiedam in Holland by A.F.Smulders for a Dutch mining company operating out of Indonesia. Because she was to be used in the swamps and jungle rivers of that country she bore little relationship to a conventional dredger, and was in fact little more than a huge floating pontoon 222 ft long, 75 ft wide and displacing over 3,500 tons. The machinery, bucket chain and superstructure was then just bolted on to the top. The Kantoeng had no means of propulsion, and had to be towed to all her jobs. However once at the site she could hold and shift her position by the use of four anchors each controlled by a powerfull electric winch. 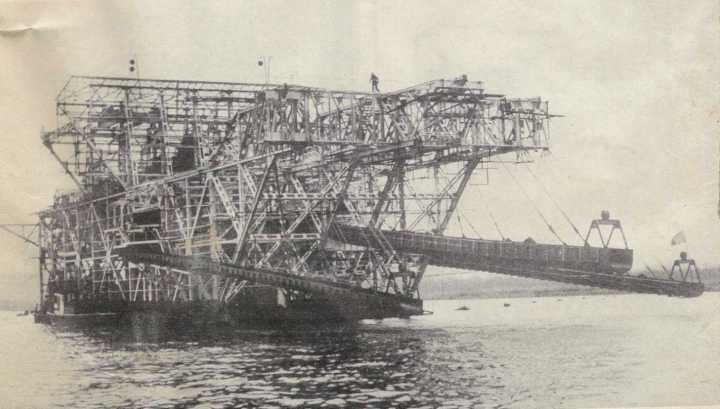 Probably the largest in the world.

Two massive diesel generators provided the power for the huge bucket chain which had 123 manganese steel buckets which were lowered through a large opening in the pontoon. Each bucket weighed 1.5 tons. After her launch the Kantoeng had two months for trials and fitting out before she left for her first assignment in Indoesia. She left Schiedam towed by two tugs on 4th March 1937 bound for Bamka in what was then the Dutch East Indies. Three days later she sprang a leak off Lands End and the Tug Master descided to turn back for Plymouth to get it fixed. The weather had been pretty bad since the voyage started and now got even worse. During Sunday night the wind got up to near gale force and the Kantoeng broke adrift near the Eddystone.

Tugs were sent out from Fowey and Torpoint but despite some men managing to get aboard the drifting vessel the tow could not be reconnected. As the leak increased, the Kantoeng took on so much water that she developed a severe list and the salvage men abandoned her. Shortly after the Kantoeng capsized and drifted upside down towards Fowey Harbour. By Monday night the vessel was about one and a half miles from the harbour entrance and there were fears that her wreck would block the harbour. The tugs and a Navy warship all tried to halt her onward path but to no avail. In the end it was her vast superstructure that saved the day by becoming stuck on the seabed on Tuesday afternoon. 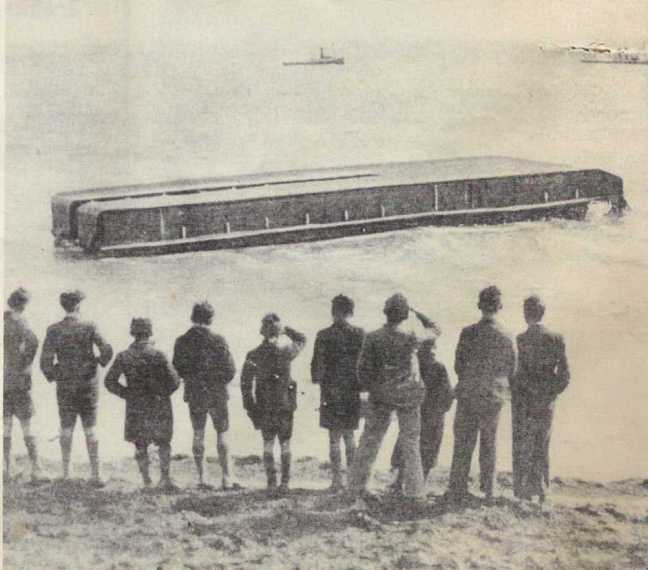 The bucket chain fell out and the wreck came to rest about half a mile from the Harbour entrance. On the following weekend holes were cut in her hull so that she sank thus alleviating any more danger to the harbour, and since there were still hopes of a salvage attempt it would be easy to patch the holes and raise the wreck with compressed air. Alas a survey later on by Lloyds declared her a total loss and the owners were compensated by the insurers for her full amount which was ?50,000. Later part of her pontoon was salvaged by the firm of Risdon Beazley, but the rest of the wreck was scattered over the years by storms, so that by the early 1960’s all that was left showing above the water at low tide was a giant gear wheel. 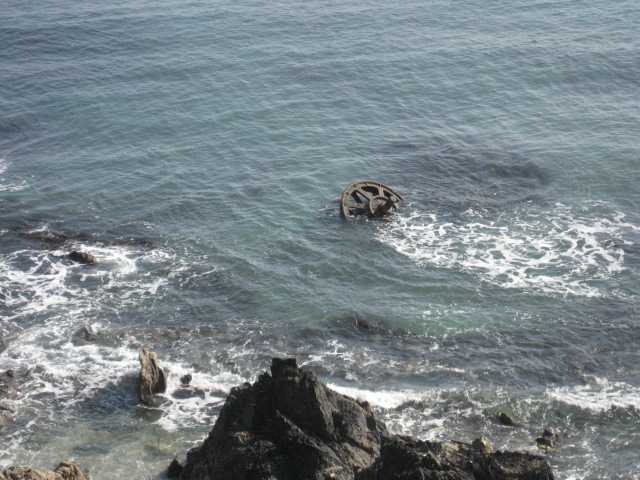 However out at sea in about fifty feet of water lay the still intact bucket chain, separating drums and all the other bits and pieces of her upper superstructure. What a dive that must have been, swimming along the buckets lying over on their sides and then through the huge separating drums. Alas all mostly gone now. Since 1970 the wreck was used for underwater explosive training and in 1978 some of the buckets were raised and sent of to a foundry. The explosive training has long since stopped and now a dive on the Kantoeng is a very sedate affair and I have not dived on it for some years (hope to rectify that) 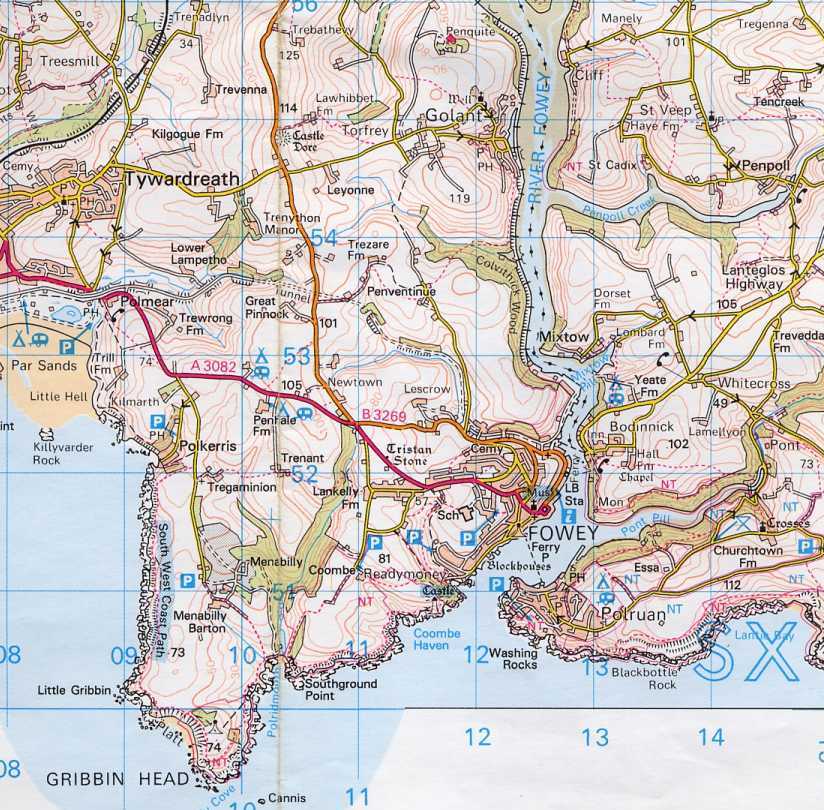 Find Coombe Haven on the map.

Still, it is a very pleasant dive, but because it is a bit out of my area I have included it as a walk, as there is still something to see when the tide goes out. In order to park within a reasonable distance, you need to drive to the National Trust’s car park at Coome Haven. This is to the west of Fowey, and you can easily get there without the fuss of gong through Fowey. Once at the car par, you will see a signed public footpath leading you down the valley to the beach at Coome Haven. 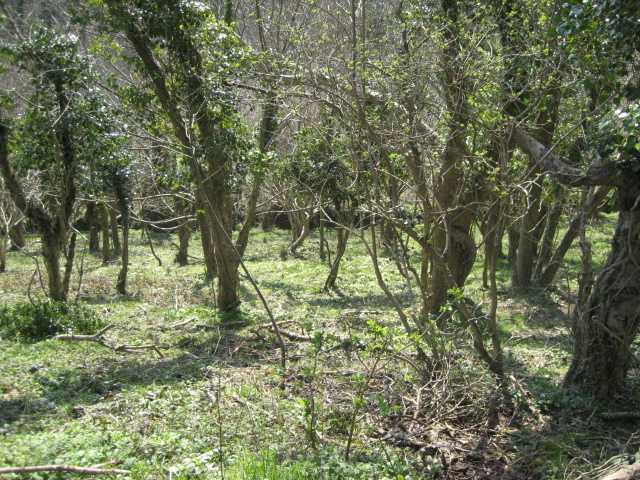 This is a lovely walk, if a bit steep, through a small woodland down to the sea. Then just carry on walking along the coastal footpath towards Polkerris until you see the bits of wreckage stickng out of the water. You really can’t miss it at low tide. Seals can be often seen in the area, and there is a lot of birdlife. 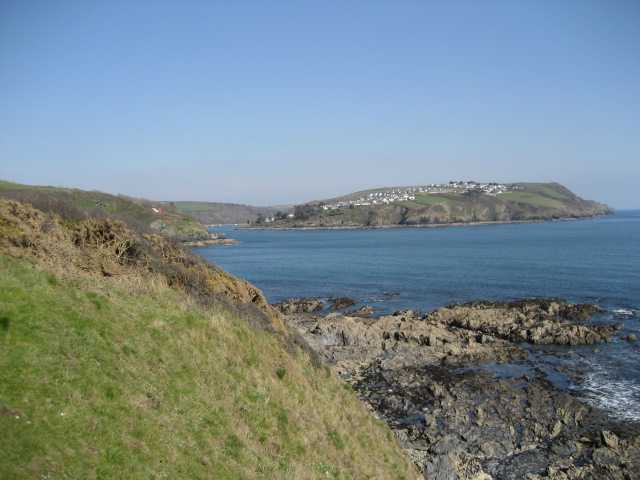 The scenic views back towards Fowey are delightfull, as are the far reaching views towards the Dodman Point. The walk from the car par to the Kantoeng takes about three quarters of an hour at a slow pace, so its not very demanding. 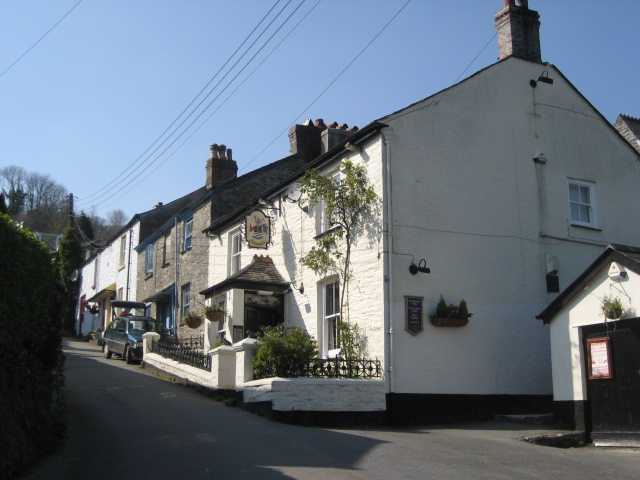 When you have done the walk you can either go into Fowey to that great pub on the quay, the King of Prussia, or go to one we found recently, The Fishermans Arms in a village called Golant. You pass nearby anyway, and the village is about one and a half miles up the river, perched right on its edge. Lovely little place and the pub does a nice lunch or sanwhiches.