Ever thought of what you would do if you did not have your trusty echo sounder? Sure you have, that’s why you have it and not a pile of muddy old rope with a weight on the end. How much simpler it all is nowadays with our little electronic bunch of tricks, all we have to do is flick a switch. Not all that long ago it was all down to a leadsman stuck up in the’ chains’ of a ship, calling out the marks as he laboriously threw the leaded line in front of the ship and then recovered it. Somewhere in between those two extremes were rather less well-known methods for recording depth, and one such depth machine, manufactured incidentally by Kelvin, Bottomly and Baird, who now are known as Kelvin Huges, and still make depth sounders, came to light recently on the wreck of the Elk. 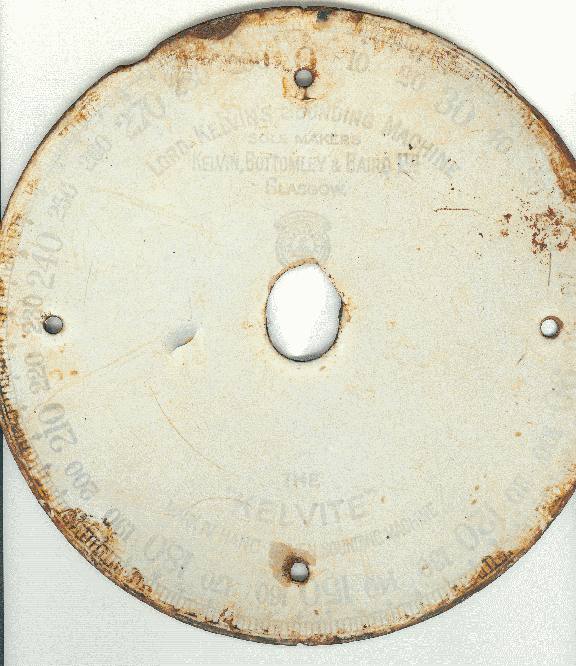 Disk from the top of the sounder. It is faint, but you can still read the wording.

The Elk was a trawlwer of some 181 tonnes built by Cook, Welton and Gommel of Hull in 1902. Requisitioned by the Navy during both World Wars, she had a checkered career and was finally sunk by a mine off Penlee Point in November 1940. When we first dived on the Elk she was completely intact, but over the last couple of yeas she has suffered a lot of storm damage and is starting to break up. So quite often for an evening’s dive we hook into the wreck and then swim out on lines so that we have a look at the seabed all around it. In the past this has given us some nice souvenirs, mostly bottles, inkpots, door handles, and more recently a complete clay pipe. The whole area is littered with bombs and large shells, and sometimes empty brass shellcases can be found. These by the way are not from the Elk but from later dumping (the date is normally stamped on the bottom of the case). 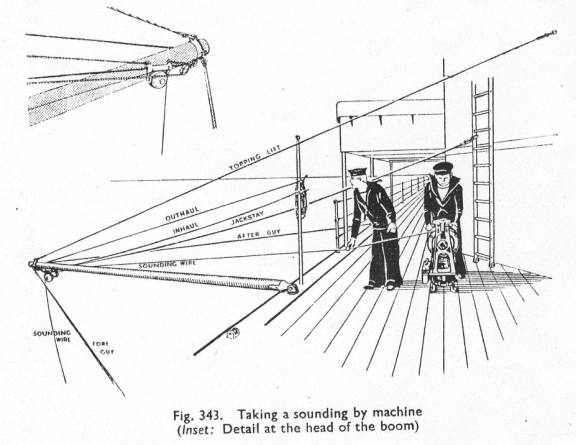 Diagram showing how it works.

On one dive my partner brought up what he thought was an empty brass shellcase, but when it was cleaned up it turned out to be the business end of a small core sampler. This rather mystified me until I remembered that on one dive we had come across a steel podium about three feet long, lying on its side in the sand. Could this be the winding gear? I was not convinced, or I must say very interested until Steve Carpenter, of Sound Diving at Queen Anne’s Battery, showed me some drawings and instructions of how to operate a Kelvin Sounding Machine that he had found in an old Admiralty seamanship manual. The whole thing looked incredible complicated with lots of wires and pulleys, and seem to need at least three men to operate it. But the machines stand was exactly like the iron one that I had seen near the Elk. 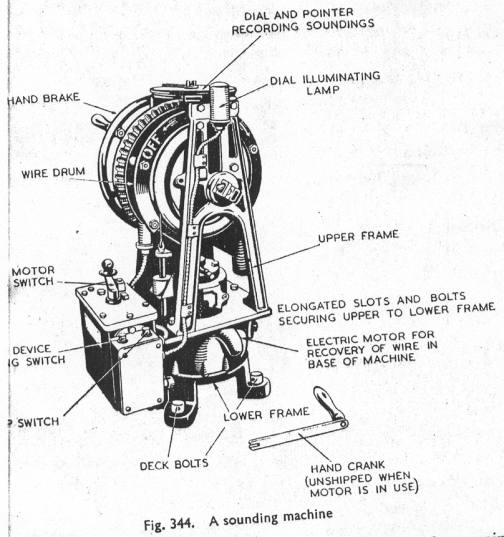 Now Steve is very interested in old bits of diving gear and associated machinery, so he provided the lifting bags and the boat, and we all went off on his regular evening ‘swanee’ dive to locate the ‘Iron Podium’. As luck would have it I managed to locate the podium on the first sweep, and very quickly my partner tied on our two lifting bags, whist I whacked in the air. As the lifting bags inflated, the podium stood up in the sand and lifted off to a height of about five feet and there it stuck. No matter how much more air we put into the bags, the wretched podium just hung there gently bobbing just above the bottom. Worse still a slight current had caught the bags and the whole contraption was slowly drifting away out of reach of our distance lines. With our time and air running low we decided to surface and get somebody else down to finish off the job. After all the podium could not get far, especially if we tied a line to it. 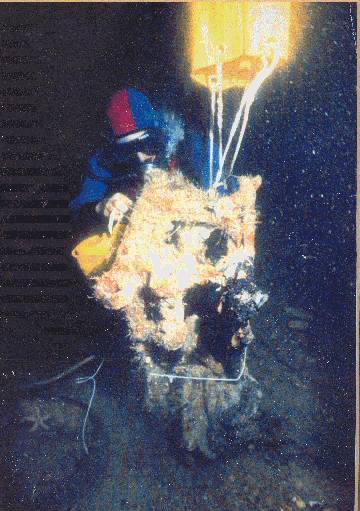 On go the lifting bags.

Having been in the services I am something of an expert at tying knots, and I still maintain that my ‘stokers dobyhitch’ could not, under any circumstances, have come undone. Suffice it to say however, that when the next team went down, the knot had mysteriously worked loose, and the podium, complete with lifting bags had disappeared. Just as I could not believe that my knot would come undone, you dear reader, may well find the next part of this story a trifle unbelievable as well. Six weeks later on another of Steve’s Monday dives, he decided to try on the reef near the Elk in the hope of finding some bottles. Since there were warships exercising nearby he decided against drifting and anchored into the reef instead. As the first diver down I checked the anchor, made sure my distance line was securely fixed, and swam off. Twenty feet later I came to an abrupt halt, because there in front of me, bumbling along the reef was the missing podium still with its lifting bags attached and inflated. 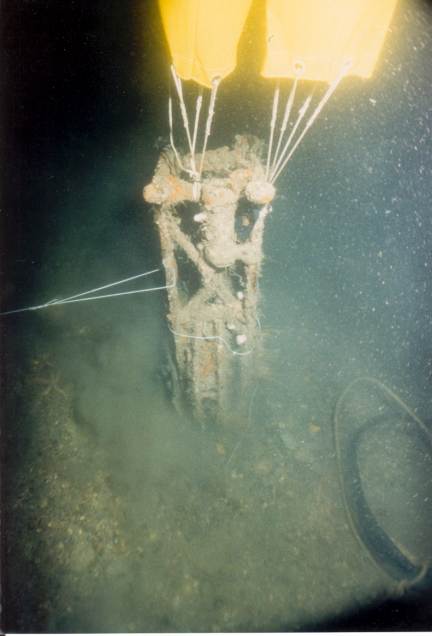 I did not believe this myself, and I was there.

Wasting no time my partner elbowed me out of the way, and this time he firmly tied on the line. We surfaced, as they say in the theatre, to thunderous applause. The rest was a bit of an anti-climax really. We got the podium into the boat and Steve carted it off to get it cleaned up. Unfortunately all the winding gear had become damaged and the podium itself was badly cracked. In the end the only useful bit was the counter on the top, which had all the measurements and its name, The KELVITE Mk IV hand sounding machine. Still with what we had, we could work out some methods of using it, and soon became glad that we never had to operate it for real. I am not a great believer in electronic bits and pieces on small boats, but after seeing the KELVITE I look at my simple Seafarer in a new light, and am glad I have it, and not the other.