In the early sixties Bali was devastated when the Mount Agung volcano erupted killing hundreds of people and sweeping away whole villages. The Balinese however took it all in their stride. Even today they are a devoutly religious people, and still most build shrines to their ancestors or Gods before they think of building their own homes. So they just kept faith with their Hindu Gods, and today, at the top of the still smoking volcano is a modern restaurant sporting a horde of very persuasive young souvenir sellers. I have always wanted to go up an active volcano so I was in my element. What I did not know, was down on the other side of the volcano where it swept into the sea, was a shipwreck that was the spitting image of probably the best known wreck in England, the James Egan Layne.

The Balinese Authorities have long since realised that their own way of life is well worth protecting, and so most of the tourist hotels lie in one area of the island leaving the rest of Bali relatively unspoilt. It is a fascinating island. Its people are probably the most beautiful on earth and are certainly the most gentle. The whole island is steeped in antiquity, most of the great temples date back over a thousand years, and its landscape has been virtually moulded over the centuries by its farmers terracing the steep mountain land into patchworks of green plots sprinkled with intricate irrigation systems to grow most of their food. The people mostly live in extended villages, with most of the activity happening outside on the edge of the narrow roads that seem to run endlessly throughout the island. 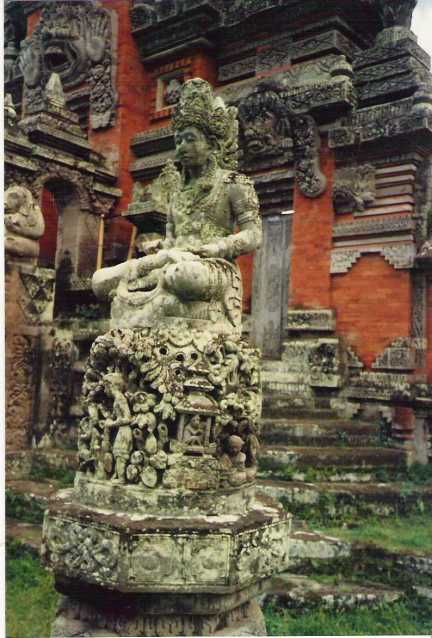 The culture goes back thousands of years.

The diving to the front of Sanur beach is pleasant, but to my mind rather boring, so when the guide mentioned a shipwreck on the other side of the island I was all ears. Locally the wreck was called the Liberty. I certainly thought that it was a Liberty ship but I never did find out what its real name was. Unfortunately it was a four hour drive around to the other side of the island and the guide would not go unless I could find a partner. Luckily I found a German who was keen to go. He could not speak much English and my German is non existent so we had to resort to sign language. This was just as well, because the guide thought he cold speak both languages, but was in fact incomprehensible to both of us. Still they say that diving has its own international language and this must be so, because at seven o’clock the next morning we were all in a VW combi van full up with diving gear heading for the other side of the island. After two hours the scenery had lost some of its magic as the jarring and bumping from the roads, some not much better than tracks started to take effect. As the sun brightened to its full power, the VW heated up like a cauldron and by the time we finally got near the dive site we were beginning to wonder if it was all going to be worth it. 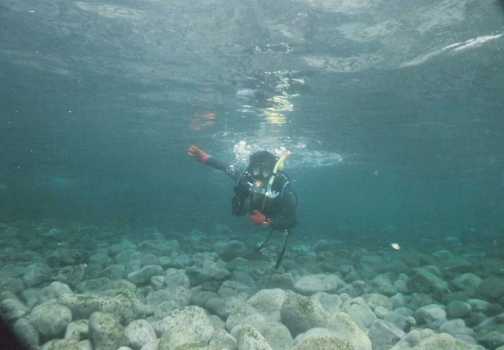 The water is gin clear.

As we approached the bottom of the volcano however, our spirits revived. The lava, although long since solidified, still smoked, and you could see exactly where the massive lava flows have swept across roads and bridges straight into the sea. The whole area is completely devoid of the normally lush vegetation, and the air is still quite thick with sulphurous gases. When the VW finally stopped we were still about half a mile from the dive site, and I must confess that I did not like the thought of struggling with all my gear across the rest of the lava to the beach in the by now wilting heat. Luckily, from around the next corner emerged a bunch of young children from a nearby village. They had obviously seen discouraged divers before, and after a bit of high spirited haggling, they stripped the VW of all its gear, popped most of it on their heads, and loped off giggling across the lava down to the beach. When we finally caught up with them, they had placed all the gear neatly on the rocks and were busy making three little palm leaf rafts filled with different coloured orchids. When they were ready, the children, suddenly solemn, led the three of us to the water’s edge, and amid much seriousness the three flower rafts were pushed out to sea in the direction of the wreck. It was their way of wishing us a safe dive. It was completely spontaneous, very charming, and very Balinese. 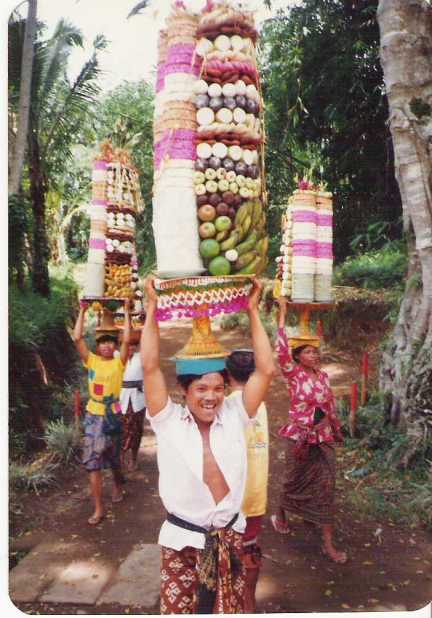 They seem to carry anything this way.

The water was flat calm and crystal clear, and as we swam out towards the reef we were surrounded by shoals of small iridescent blue and yellow fish. The bottom was made up of petrified rock and after about fifty yards it started to slope and then abruptly plunged to ninety feet. The wreck was sat more or less upright, right against the side of the reef which made depth control very easy, and the near eighty foot visibility meant that nobody would get lost. Right away I felt at home. Apart from the clouds of brightly coloured fish, I could have been on a Saturday afternoon dive on the Egan Layne. It was quite uncanny the way I kept coming across features that I recognised, and soon I became completely orientated. This was just as well because this ‘Liberty’ has one feature that is different from the Egan Layne, and that is brass, tons of it. Great valve chests with whopping great brass wheels, long copper pipes with big brass fittings, and down in the engine room it was like a scrapper’s supermarket. I was amazed, and because I ‘knew’ my way around the ship I could go and look in all the best places. I had always wondered what the ‘Layne’ would have looked like before the salvors got to her, now I have a pretty good idea. When we surfaced I could hardly wait to get back down for the second dive.

This time the guide let me lead, and of we went on a magical dive through the holds, up around the wrecked superstructure, and down over the side to the bottom of the hull just like we do at home. Also like home, the wreck is covered almost wall to wall with shoals of fish, just as friendly and eager for hand held food as those on the ‘Layne’, but of course so brightly coloured that they can make your eyes ache after a while, especially with the bright sunlight bouncing off their scales. All too soon it was all over and our little helpers were presenting us with orchids for our ears. ( The orchids grow like weeds on Bali. If you are married, you wear yours behind your right ear) More orchids were scattered on the sea to thank the Gods for our safe return, and as the ebbing tide carried them out to the wreck we clambered back over the lava to the waiting VW. The Balinese consider their volcano to be The Navel of the Universe, a place for spirits, and a possible entrance to that place that we in the West call Heaven. It’s nice to now that there are still going to be wrecks to dive on in the afterlife, that’s assuming we all get there of course. 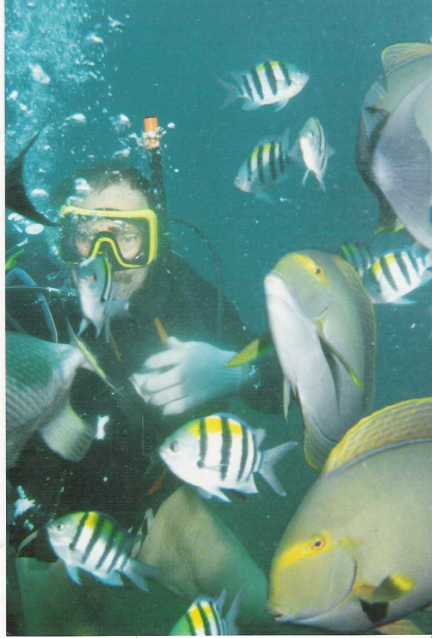 The divers are mobbed by fish.

I dived this shipwreck in March 1987, and the preceeding article is what I wrote then. At the time I thought that it was a Liberty ship, and everyone that dived on it thought that it was too. It was only some years later when I started reading up on this ship, that I realised that all was not as I had assumed. A quick look around the lists of Liberty ships soon revealed that this boat was not one of them, but possibly an earlier ship. More digging found that this ship was in fact the S.S. Liberty built in 1918 by the Federal Shipbuilding Yard in New Jersey U.S.A. She was 411 feet long, 55 feet in the beam with a gross tonnage of 6211 tons.( internally she was rather like the Layne)She was built by order of the United States Shipping Board and served the U.S.Navy until 1919. After that she was either laid up or more likely was chartered by various companies to haul a mix of general cargo. At the outbreak of the Second World War she was requisition by the U.S.Army. 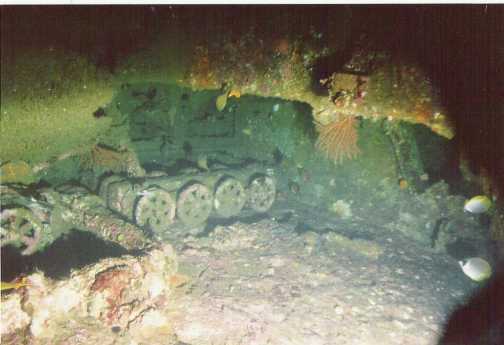 On Jan 11th 1942 she was on her way from Australia to the Philiphines carrying a cargo of railway parts and rubber when she was torpedoed in the Lombok Straits by the Japanese submarine 1-66 . She was taken in tow by two U.S. Navy destroyers who tried to tow her to the port of Singaraja. However the torpedo had done too much damage and with the Liberty taking on massive amounts of water it was decided to run her aground at Tulamben Bay. ( it’s quite strange that her sinking and grounding almost mirror what happened to the James Egan Layne) For twenty one years she stayed on the beach being gradually stripped of anything useful by the locals until the eruption of Mount Agung pushed her into the sea where she lies today.

Nowadays you don’t have to clamber over lava or carry your kit very far, as there is a dive shop and a caf?on the beach. The wreck itself is still a great dive, but according to the dive operators parts of it have become quite unstable, and bits collapse every year. Still for photographers its still a paradise as the wreck is covered with over 400 different species of fish .