The Edwin Fox was built as a full rigged sailing ship by Thomas Reeves at Sulkeah, in the Bengal Province of India in 1853. She was the last ship built for East India Company, and was named for Edwin Fox a convenor in a financial company affiliated to the East India Company. He was also, and probably more importantly, related to Charles Fox the eminent politician. The Edwin Fox was just over 144ft on the waterline, had a beam of nearly thirty feet, with a gross tonnage of 747 tons. She was built with no expense spared, of massive planks of teak and saul. However she never sailed under the East India Company flag as her builder took her to England on her maiden voyage with a cargo of tea. 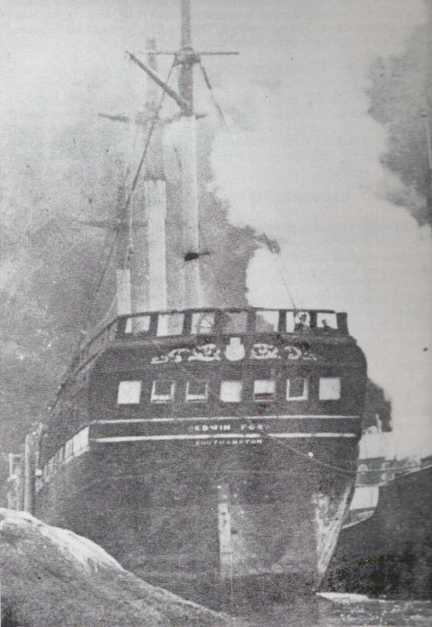 Once in England he sold her to Sir George Hodgkinson who kept her less than a year before he sold her at a hotly contested auction for ?0,000 to Duncan Dunbar, one of the most celebrated ship owners of the day. The Crimean War had just broken out a year before and Dunbar immediately chartered the Edwin Fox to the British Government as a troop transport. This employment lasted until the fall of Sebastopol, where upon she was discharged from service, having made Duncan Dunbar a fortune. Between 1855 and 1858 the Edwin Fox made three trips to India carrying pale ale, and tea back to England. 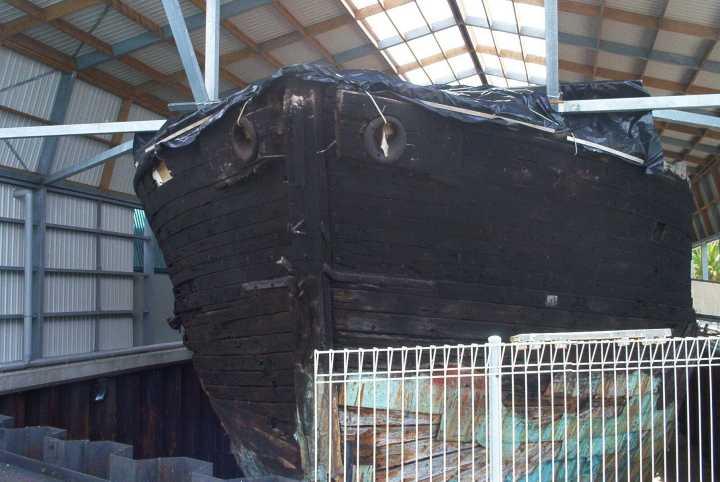 Later that year the Government again chartered the ship, not for troops this time, but for convicts. Two hundred and eighty males guilty of so-called political crimes were transported to Fremantle in Western Australia. They were caged like animals in the holds and had to endure a dreadful voyage of eighty-nine days before the ship finally touched land. Between 1858 and 1862 the records are a bit sketchy but she did become stranded near madras on India’s east coast and only managed to get off by jettison all her cargo including 446 hogsheads of beer. In 1862, Duncan Dunbar died, and the ship was sold to Messrs. Gallatly, Hankey and Company of London. After making five voyages to Australian ports she had her sailing rig changed to that of a Barque. 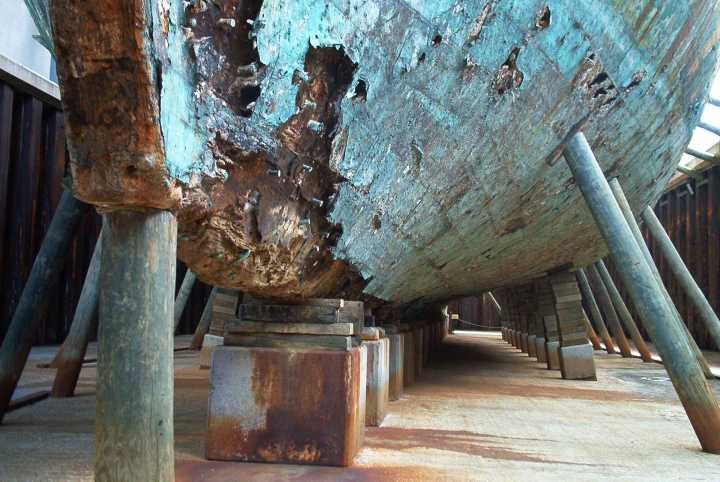 Still with her copper bottom.

This meant fewer crew and less maintenance. In 1873 the Edwin Fox was charted by the Shaw Saville and Albion Line for use as an immigrant ship. Her first voyage from London to Lyttelton in New Zealand took 114 days and the ship was lucky to get there. When the ship sailed out of London the crew managed to breach a cargo of spirits and got roaring drunk. A violent gale sprang up and the ship developed a severe leak, which the crew were unable to stem because they were all still blind drunk, so the passengers had to man the pumps to keep the ship afloat. To make maters worse the ships doctor was impaled by a metal rod and died, as did a seaman helping to secure a lifeboat. In the end the Edwin Fox, was sighted by the American steamer Copernicus. She came along side and her Captain implored the passengers to jump to safety. When some of the crew tried to get in first he threatened to shot the lot of them. In the end the Edwin Fox was towed safely into Brest. All the crew were arrested and sent home in chains to receive six months hard labour.

Inside the hull which is in remarkable shape

It took six weeks to repair all the damage before the ship could resume her voyage, and for the passengers things went from bad to worse. The cramped and unhealthy conditions on board combined with the lack of a proper diet led to an outbreak of Scarlet Fever, which killed four people. One more died of consumption, and a child died from thrush. When the ship finally arrived in New Zealand waters she was forced to spend two weeks of Lyttleton Heads because of high seas and when they abated they were refused permission to land because of the fever. Finally after ten days of quarantine on Ripa Island, the passengers were able to disembark on 9th July. 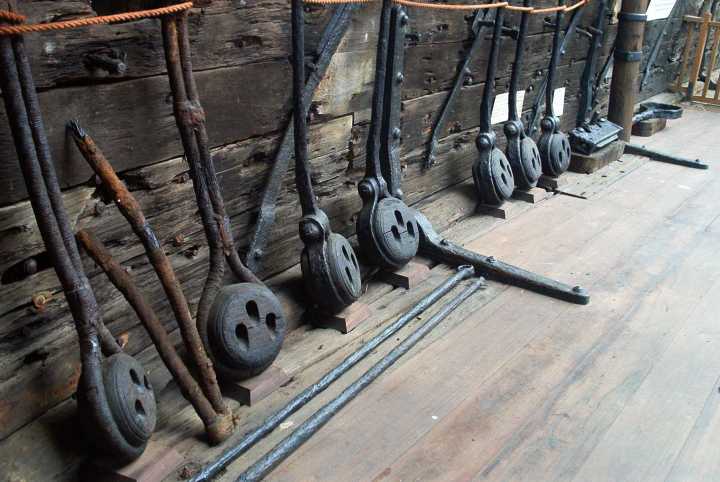 Her second voyage was almost as eventful. After leaving London on the 23rd of December 1873, the Edwin Fox got caught out in a storm and had to run for shelter in the lee of The Downs near Dover. As she was bedding her anchor in she collided with the schooner Westward Ho sinking her. Luckily all the crew were picked up by other boats but the Edwin Fox lost her jib boom and an anchor. Before she could get the spare anchor ready she drifted onto the rocks near Deal. The Ramsgate Lifeboat was called and managed to remove all the passengers. In the morning the storm had abated and the Edwin Fox was re-floated. She had no serious damage to her hull and was towed back to London. 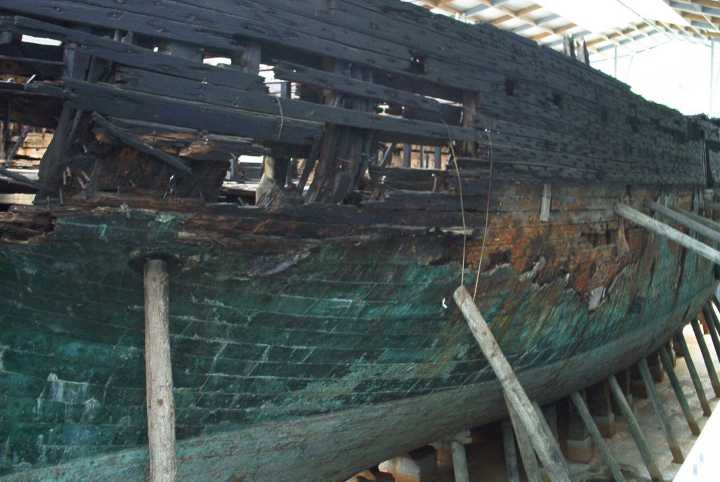 The hull needs a lot of work.

After she had been surveyed it was found that there was virtually no damage to her at all, a tribute to the sturdiness of her construction. She sailed once again for New Zealand on the 18 April with 225 passengers and arrived in Wellington with no further mishaps. Between 1874 and 1880 the Edwin Fox completed several other voyages but by now steam ships were starting to take the lions share of the passenger trade. By now she was starting to show her age and in the worldwide depression in the early 1880’s assisted immigration to New Zealand slowed to a trickle. A new lease of life came in the form of the frozen meat trade, the new revolution. Steam ships were expensive but frozen meat didn’t need to be quick. The Edwin Fox was kitted out with the necessary refrigeration kit salvaged from other damaged ships, including massive steam boilers mounted on the deck to provide the steam for the fridges. Her masts were reduced and she took on a most peculiar look. However she was efficient in producing profits for her owners, the Shaw Savill line. Were once 240 immigrants had travelled in much discomfort now 14,000 frozen sheep carcases could be shoehorned into the same space. 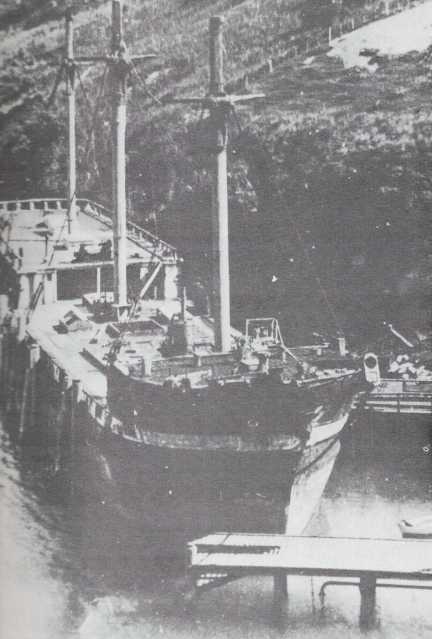 Four years later the Edwin Fox was towed to Llyttleton to have her boilers repaired. She was then used as a freezer for a shore based meat company at Gisbourne and then Bluff. By !897 she was in Picton being used as a freezer hulk, but by now her machinery was obsolete, so all of it was removed and the ship was then used as living accommodation for the employees of the Picton Meat Works. By 1905 she was berthed behind piles below the Freezer works. Everything of value was removed from her and holes were cut into her sides to allow tramlines to be put in place to carry coal out to the freezer boilers. After all her proud service The Edwin Fox was reduced to being a coal hulk. Over the following years the ship became more and more dilapidated, and finally she wasn’t fit to even be a coal hulk. Worse, she was now just a derelict hull getting in the way. By the 1950’s the Edwin Fox was gently rotting, alone and unloved, but her spirit stayed intact. In 1965 a restoration Committee was formed, which bought the ship for one shilling. Over the years much was done but there was never enough money and of course bureaucracy got in the way and delayed the restoration with demands for permits and approvals. 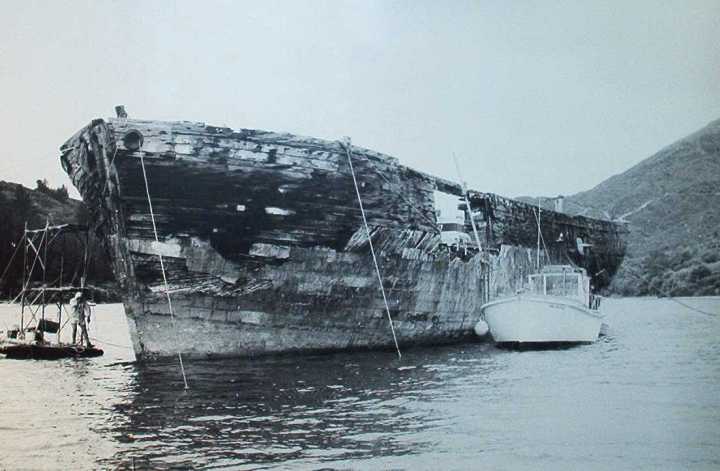 Finally in 1986 everything was ready to move the ship to her permanent berth the other side of the harbour.. A channel was dredged from her silted up mooring, and at last the Edwin Fox floated free for the first time in twenty years. A month of hectic activity by a small army of volunteers shovelled out the 400 tons of shingle ballast and gave the outside woodwork a coating of Stockholm tar. The Edwin Fox was then towed across the shipping lane to the eastern side of Picton harbour where she was fitted snugly into her new berth. In 1999 a roof was built over the ship. This was a huge benefit as rainwater causes all sorts of damage. The main hull of the ship is in great condition considering its age, because it was effectively preserved in the mud for twenty years. At the moment the Edwin Fox is ranked as the world’s ninth oldest ship by the World Ships Trust, but because there is so much of her which is still original (unlike our Victory, which over the years has been completely rebuilt) she might go up to third. 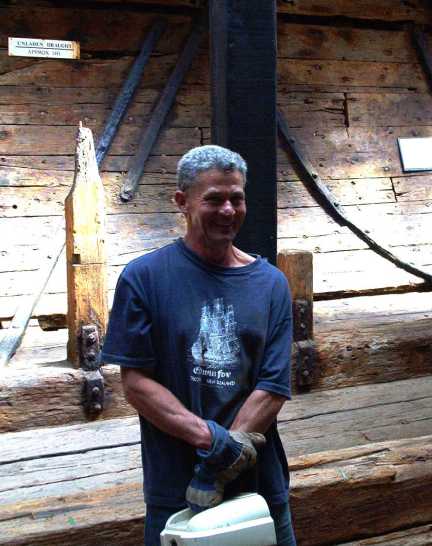 A project like this takes a ton of money and heaps of enthusiasm and it’s going to be years before all the dreams for the Edwin Fox are realised. When I visited the ship I was shown around by John Sullivan, who has worked on the ship for years. He, like the rest of the ‘staff’ were contagious in their enthusiasm, and his knowledge and obvious love of the vessel was a joy. I had a great time.

If you want to help with donations, or just find out more, these are the contacts