The Mohegan, originally built as the Cleopatra by Earles of Hull, was a vessel of some 7000 tons. Prior to her launching she had been purchased by the Atlantic Transport Company of London on July 29th 1898. The Mohegan was an extremely luxurious and modern ship for her time, and as well as being fitted out in lavish Victorian style, she was also equipped with eight water tight compartments, with a steam pump capable of pumping out each compartment in turn. Measuring 482 feet in length and 52 feet at the beam, the Mohegan drew nearly 20 feet and was capable of a top speed of 14 knots. She carried 97 crew, about 60 first class passengers, and stockmen to attend the animals carried as deck cargo. 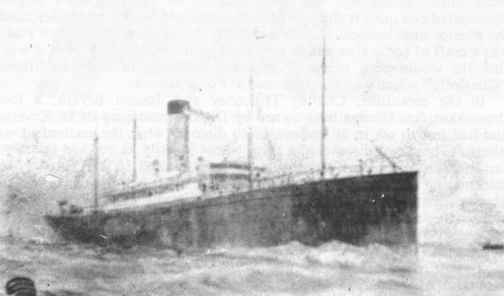 The Mohegan from an early watercolour.

The Victorians however were hard taskmasters, and expected value for their money. So when the Mohegans completion was held up by a strike, the builders had to skimp on her specifications and rush her through to avoid the crippling penalty clauses for non-delivery. Her maiden voyage across the Atlantic causes a furore, and she leaked so alarmingly that she had to be docked in New York for repairs before returning to the Tyne for a complete refit. On 13th October 1898 the Mohegan set out on her second voyage. Once again bound for New York, the Mohegan left Tilbury with Captain Griffiths in command. She carried a full complement of 60 passengers and 97 crew, and her general cargo consisted mostly of beer and spirits. However, a fair proportion of the cargo also contained church ornaments and artificial flowers, an odd but faintly prophetic mixture.

At first all went well. The weather was quite good, and on the next day, October 14th the Mohegan found herself off Prawle Point, where she made a routine position signal to her owners. Later as she passed Rame Head, she was sighted by a signalman who was surprised to see her less than ten miles offshore. By then the Mohegans fate was almost sealed, because she was already steaming on a compass course that was hopelessly incorrect. At about a quarter to seven that evening, the passengers were just taking their places for dinner. In the first class cabins the nannies were supervising the children’s preparations for bed. On the bridge the lookouts were alert, and in the wheelhouse the helmsman was steering a course ordered by the officer of the watch, and personally checked by the Captain. All was as it should be. 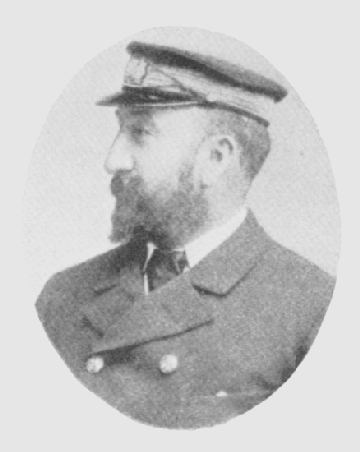 Five minutes later the Mohegan, ablaze with lights smashed at full speed straight into the Manacles Reef, ripping a huge gash right below her waterline. Against this kind of damage the watertight compartments were useless, and several were flooded straight away. Within thirty seconds the engine room had to be abandoned, and very quickly the generators were flooded out plunging the whole ship into complete darkness. On the bridge, Captain Griffiths and his officers managed to fire off some distress rockets and started to get the passengers into the ships boats. However the Mohegans list to port soon became so severe that the starboard lifeboats could not be lowered, and so offered no escape. With threequarters of the ship underwater the Mohegan quickly sank, and within ten minutes of striking she was gone leaving those on deck to swim for their lives. Some managed to cling to the mizzenmasts rigging which remained above the water, but for 106 poor souls their end was at hand. 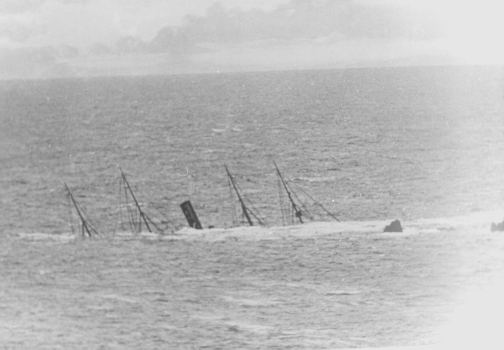 The Mohegan aground on the Manacles.

The loss of life would have undoubtedly been even greater but for the presence of mind of the Cox’n of the Porthoustock lifeboat, James Hill. When he saw the Mohegan coming across the bay, he realized that it would most probably hit the Manacles, and he had almost mustered his crew before the Mohegan struck. Two of the luckiest people to survive were a Miss Rondebush, and a Miss Compton-Swift. They had escaped the ship in a lifeboat, which was later overturned, and they were both trapped underneath the boat for over an hour before being rescued. Amongst those who perished were Captain Griffiths and all his officers. Survivors praised all of them for the cool and courageous way they had stemmed the tide of panic, when it became obvious that escape by the ships boats was hopeless. 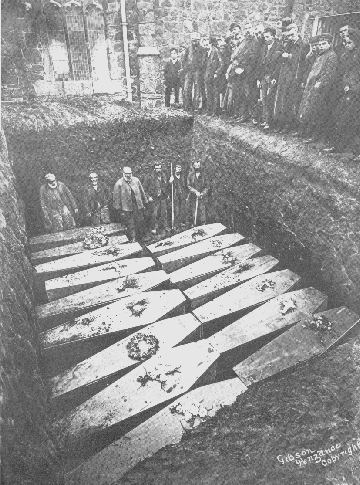 The mass grave at St.Keverne’s Church.

In the aftermath of the disaster an inquiry was held into why the Mohegan had steered such an incorrect course. Many theories were put forward, but since the Captain and all the officers were dead no real conclusion could be reached, and the mystery has remained unanswered to this day. About the only good thing to come out of the disaster were new recommendations into the type of lifesaving equipment to be carried on all passenger ships. Most of the dead were buried in a mass grave at St. Keverne church which more or less overlooks the very spot where the Mohegan struck. Instead of a headstone a simple cross was erected. There was no epitaph, just one word ‘Mohegan’. Three months later the headless corpse of Captain Griffiths was washed ashore in Caernarvon Bay. The sea had finally finished with the Mohegan.

The interment of the victims in the mass grave.

I had always wanted to dive this wreck because it is one of the classic wreck stories. Any wreck with this type of reputation is often over rated, but to my surprise I found the wreck fascinating. I first dived this wreck in 1982 and these were my first impressions.

The day was perfect, with the sea flat calm and the Manacles looking as innocent as apple pie. However the fog started to come down , and only about an hour of slack water we had to get on with the diving fairly quickly. 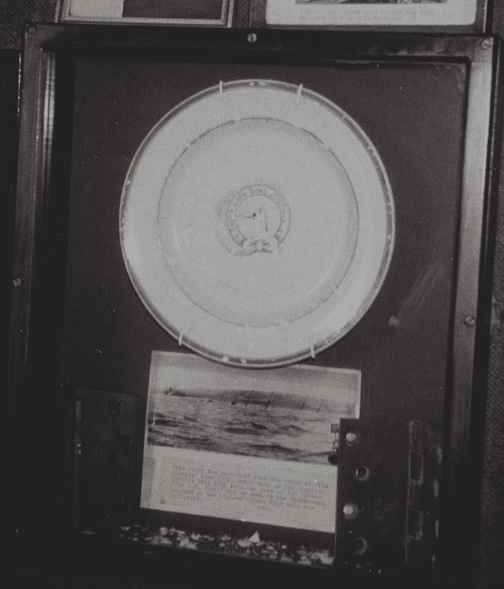 A plate from the Mohegan displayed at The Five Pilchards Inn.

Incidentally for those who have never been to this part of the country, the Manacles looks like a lunar landscape and casts a brooding air over the whole proceedings.

The remains of the Mohegan are stuck down in between huge pinnacles of rock which are covered in pink and white dead mens fingers. The depth was about seventy feet, with the visibility around twenty feet. There are roughly two different dives on this wreck the first being the Mohegans massive boilers in about eighty five feet and the bow area where I was.

The bows are smashed up but lie on top of the rocks with their ribs stretching away into the distance. A very impressive sight. In amongst the mass of wreckage are the winches that were used to haul up her anchors, and further along were the remains of another boiler, about twenty feet in diameter which was probably used to power the winches. This boiler is extremely picturesque with some of it smashed open to reveal the pipes inside covered with pale pink dead mens fingers. 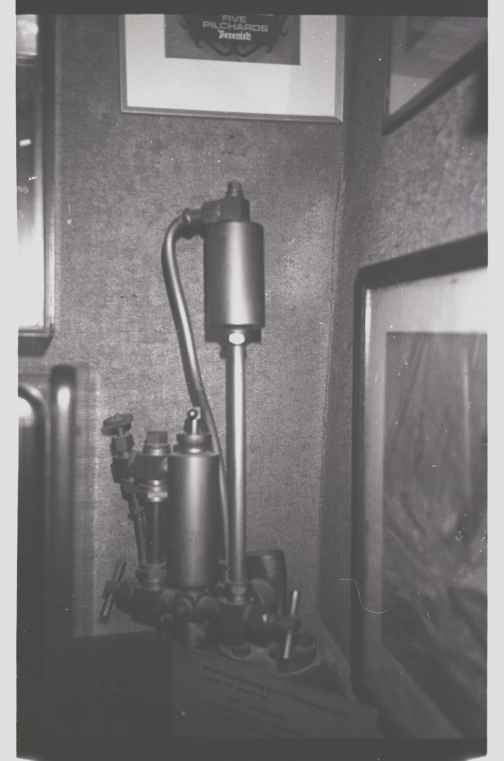 The steam whistle also at the Inn.

After that we sort of just wandered about this huge part of the wreck soaking up the atmosphere. The Wreck has a menacing charm all of it own. The wreck caused great loss of life, and it seems that some how that memory has been entombed with the wreck.

I next dived on the Mohegan in 1990 on the boilers. This time it was early morning and the viz was sixty odd feet. Honest. The boilers were massive and the mass of steel plating stretched into the distance like the M1. Looking up you could see the boat almost impaled by one of the huge rock pinnacle’s. A great dive on a great wreck.