Tucked away in the south east corner of England is the seaside town of Sheerness. On the surface you would think that Sheerness was just another pleasant holiday town, and you would be right, because you would have to go underneath the surface to a spot some three thousand yards off the seafront to find the dangerous secret that Sheer- ness has harboured for over forty years. A secret that although buried In sand and silt sixty feet down within the rusting hull of a World War 2 Liberty ship, Is so potentially hazardous that nothing is allowed nearer than five hundred feet. 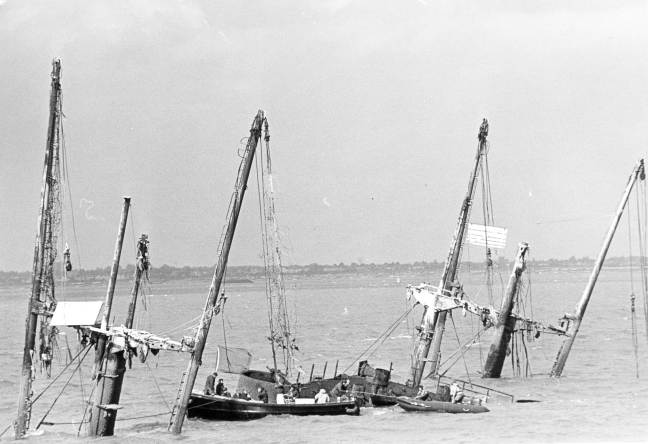 The Montgomery, with Navy Diver’s inspecting the ammunition.

When that Liberty ship , the Richard Montgomery, sank all those years ago it contained over seven thousand tons of explosives, enough to blow Sheerness and all its neighbours sky high, and In credibly its still all there like some giant time bomb ticking relentlessly away. The trouble is that nobody can seem to agree whether the clock has stopped, or is just about ready to strike. With today’s attitudes on all things ‘green’ it seems absurd that the Montgomery’s cargo was not made safe years ago, but absurdity and incompetence often go hand in hand, and incompetence certainly seems to have been the hallmark of this story right from the start. 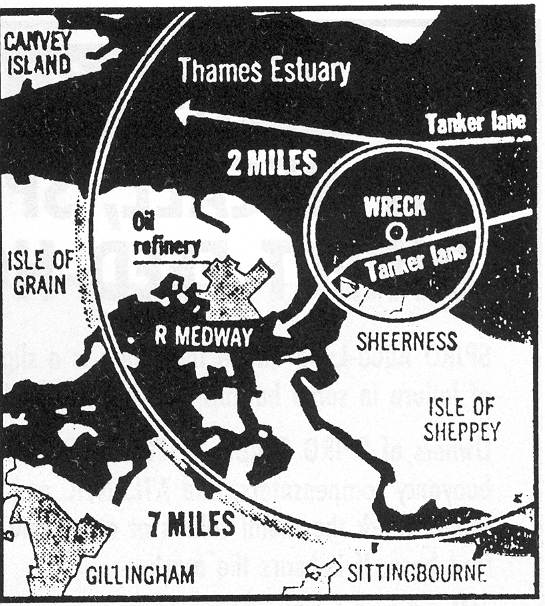 Location of the Richard Montgomery.

The Richard Montgomery started life as the seventh ship in a production line of eighty two Liberty ships built by the St John’s River Shipbuilding Company in Jacksonville, Florida, and was launched in July 1943. She was named after an Irish soldier, who after getting himself elected to the American Congress fought in the war against the British in Canada and was killed in the final assault on Quebec In 1775. Only a year after her launch In August 1944, the Richard Montgomery, on what was to be her final voyage loaded up with over seven thousand tons of bombs and munitions at Hog Island, Philadelphia and slipped quietly from the Delaware River and crossed the Atlantic to the Thames Estuary where she was to await a convoy for Cherbourg. At Southend she came under the orders of the Thames Naval Control and the Kings Harbour Master ordered her to anchor in a berth just off the north edge of the Sheerness Middle Sand. Considering the fact at low water there was only about thirty foot of water atthisanchorage and the Richard Montgomery drew just over thirty one feet, it was fairly obvious that the Kings Harbour Master had made a grave error of judgement. So obvious was this that the Assistant Harbour Master refused to carry out the order unless it was put in writing. 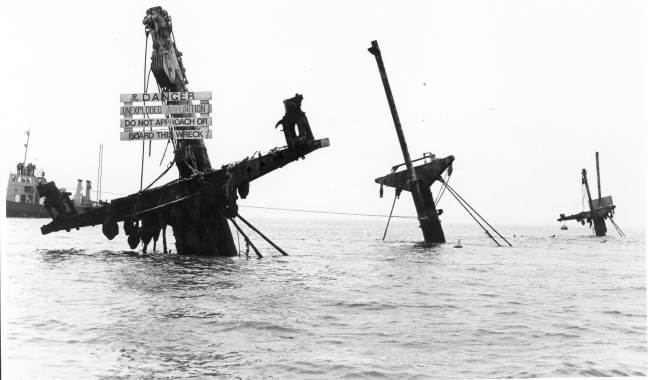 The wreck still sticks out of the water.

A noisy argument ensued which attracted their superior officer who sided with the . Kings Harbour Master and told him to confirm the order. The Assistant stormed out and was posted to another position two days later. Significantly his evidence was not heard at the resulting board of enquiry which did not even mention the difference of opinion. Early on Sunday morning, August 20, lookouts on the ships anchored near the Richard Montgomery saw her swinging towards the shoal as the tide flowed in and frantically sounded their sirens in warning. The Chief Officer who was on watch did nothing to save his ship, not even bothering to wake his Captain who was peacefully asleep in his cabin. Soon the tide pushed the Liberty ship right onto the top of the Sheerness Middle Sand where she became completely I stranded. As the tide ebbed the ship settled down more firmly on her silty bed and buckled some of her plates, causing them to emit cracking noises that sounded like loud gunshots. The crew. not unnaturally apprehensive about their cargo suddenly decided that they all wanted to be landlubbers and deserted the ship in a flurry of lifeboats and rafts. Since the Montgomery had stranded on a neap tide she could not be refloated for about two weeks, and even then only if most of her cargo was removed. 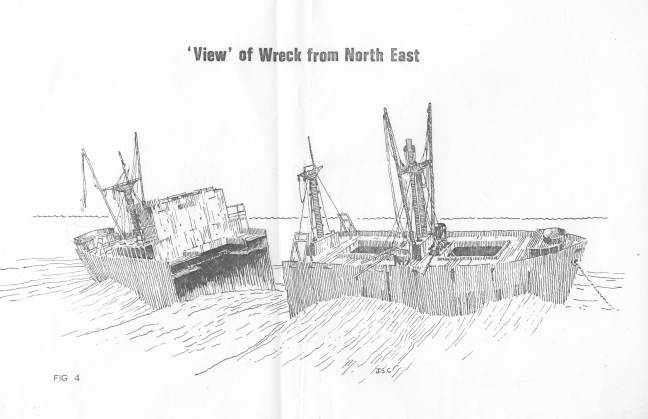 Drawing showing how she lies.

Immediately an emergency operation was put together and the next morning unloading started using the ships own cargo handling equipment which was still intact. At this stage there was liffie damage to the ship and all the cargo hatches were still securely in place. Twenty four hours later however. disaster finally struck when the strain on the hull became too much and it cracked like an eggshell at the front end of No 3 hold. Flooding quickly swept though No 1 and No 2 holds. and early the next day the Richard Montgomery completely broke her back. Salvage continued until all of No 4 and No 5 holds. which were still above water. were emptied. The unloading was aban- doned when it became obvious that the ship was now a total loss. Decaying, unstable explosives With the war reaching its final crescendo there were plenty of other ships that needed attention and the Richard Montgomery was deserted In the fond hope that ‘somebody’ would do something later on after the war was over. But nobody ever did, and the remaining cargo, some three and a half thousand tons of decaying unstable explosive Is still there today buried in her hull. 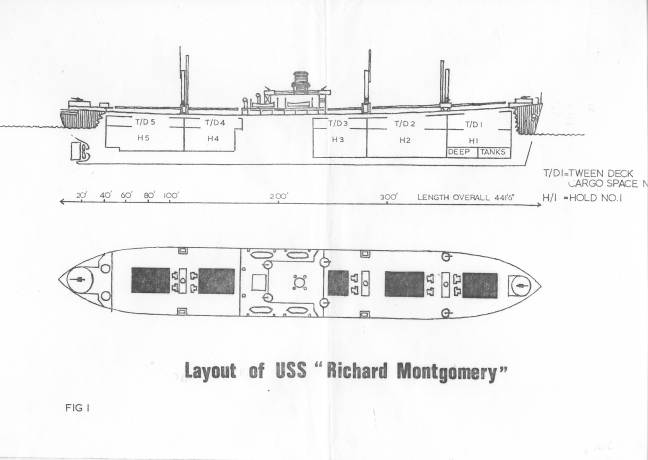 Layout of the ship.

So what are the risks? Well most people agree that If the Richard Montgomery blew up, it would be the largest non-nuclear explosion in history. Would Sheerness and the nearby oil refinery on the Isle of Grain be swamped by a huge tidal wave, or engulfed by an awesome fireball as some experts have predicted? Would terrorists use the terrifying potential of the ship to hold the Government to ransom by threatening to eradicate the population of a small town as some journalists have suggested? Or has the vessel’s cargo now decayed to a point where it has become a minimal risk as various Government surveys have suggested? Curiously the answer lies in a mix of all these. Of the three and a half thousand tons of explosives left, most contain TNT and are impervious to seawater. It is highly probable that their fuses have long since deteriorated and would therefore need something else to set them off. Unfortunately on the deck above these are approximately one hundred and seventy five tons of fragmentation cluster bombs fully armed and ready to go. These are considered to be the main danger, because if the decking collapses these bombs could fall on top of the others and set the whole thing off. 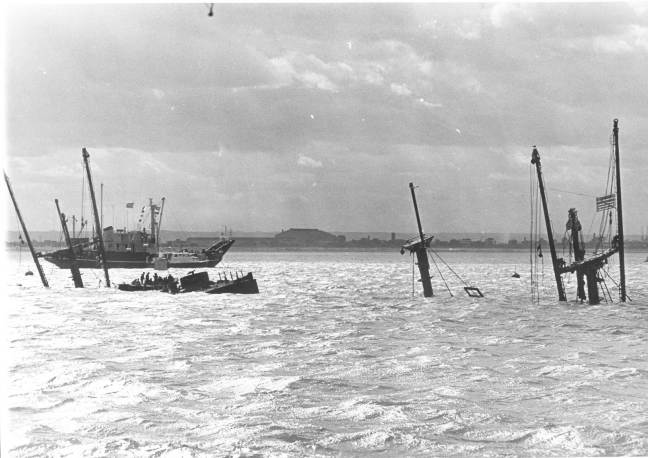 This is not as far fetched as It might seem, Already the ship is broken into three pieces and In 1980, after an underwater survey Norman Tebbitt, then Minister of State for Trade said that the ” risks of removing bombs from the stricken wreck were unacceptable.” This statement supports the view taken way back in 1948, and later in 1967 when the American Government, still nominally the owners of the vessel, offered to make the Montgomery’s cargo safe, The Government of the day refused point blank on the grounds that it was too dangerous and that the bombs would get ‘safer’ the longer they were left alone.

In August 1981 a thorough under- water survey was carried out by Navy divers, including going right into the holds containing the bombs After nearly a month their verdict was that although the bombs were still potentially dangerous, it would be safe to remove them from the ship. Said Des Bloy, Moorings and Salvage Officer at Chatham, “it would take one hell of a detonation to make that ship blow up”.Apart from malicious or terrorist action, one of the most likely causes of detonation are the huge amount of ships that pass daily close to the wreck.

Over the years twenty four near misses have been recorded, and once a cargo vessel actually hit the wreck knocking down one of her guns and demolishing a ventilator. What the consequences of a large passenger ferry hitting the wreck would be God only knows, but repeated appeals to the Authorities for a solution have come up against a stone wall of indifference and worries about the cost of a safety operation. So there the Richard Montgomery lies, gently rusting away, probably safe, but still a huge potential threat to the communities that surround her. As one Sheerness councillor bitterly said, “If this boat had gone down outside the Houses of Parliament, something would have been done long ago. How far down the river do you have to go before a dangerous wreck becomes acceptable?”