The Erich Koellner was a Leberect Maass Class Destroyer with a displacement of 2200 tons, and a complement of 315 officers and men. She was 374 feet long, 37 feet in the beam, and had a draught of nine and ahalf feet. Her machinery, performance, and armament was similar to the Dieter Von Roeder Class, except that she had four 3.7cm and six 20mm guns.

Launched on the 18th May 1937 the Erich Koellner, Z13, was completed on 8th August 1939. She then conducted offensive mining operations around the North Sea. She was not a lucky ship and in February 1940 she was involved in a bizarre incident, when in company with other destroyers she attacked elements of the British Fishing Fleet in the North Sea. In the midst of the engagement a German aircraft came along and happily bombed the hell out of the German Destroyers who fled in panic into a previously unknown British minefield. Two Destroyers, Z1 and Z3 were sunk, and the Erich Koellner, in an effort to rescue some of their stricken crews, managed to drown some of her own whilst launching the rescue boat. The Skipper then thought he saw torpedo tracks so abandoned the rest of the sailors in his attempt to escape, almost ramming the wreckage of the Z1, which he mistook for a submarines conning tower.

It must have come as some relief for the Z13’s Skipper, Korvette Kapitain Schulze-Hinrichs, when on the 7th April 1940 he became part of Group 1, (Narvik). He embarked two hundred troops at Wesermunde, and after meeting up with the taskforce lead by the Battleship Hipper, the Z13 arrived at Narvik on the 9th April after an extremely rough passage. She landed her troops at Elvegard at the head of Herjantsfjord where she anchored for the night in company with Z9 and Z12. Just before dawn on the 10th April five British Destroyers, Hardy, Hunter, Hotspur, Hostile, and Havelock slipped past the two U-boats guarding the entrance to Ofotfjord and sailed twenty five miles up the Fjord to completely surprise the Five German Destroyers lying peacefully in Narvik Harbour. 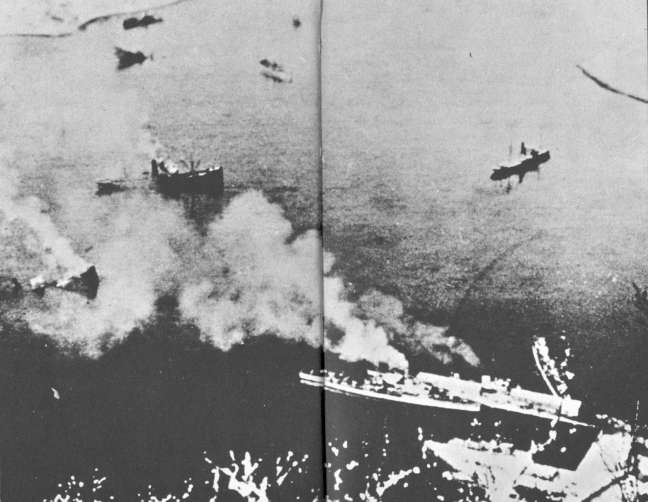 Narvik harbour after the first Battle.

Two German Destroyers were sunk at once and three were fatally crippled. The British only suffered a minor hit and were gleefully withdrawing when Z13, Z9 and Z12 emerged from Herjangsfjord and surprised them. In the fight that followed (First battle of Narvik) the British were caught in a crossfire as two other German Destroyers, Z2 and Z11 charged out of Ballangenfjord. A running battle soon developed and the Hardy was blasted by gunfire and forced aground. Soon Hunter was hard hit and to make matters worse was rammed by Hotspur who had been badly damaged by gunfire. Hotspur managed to untangle herself, but Hunter could not be saved and sank. 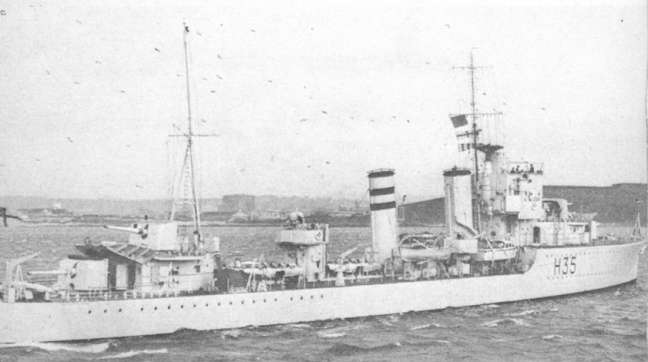 H.M.S. Hunter seen here at Plymouth before the Battle.

As the British escaped, the Erich Koellner and the two other German Destroyers briefly gave chase but soon broke of the engagement.This proved to be unfortunate for the Germans as the British came across the Ammunition ship Rauenfels loaded to the gunnels with desperately needed 5 inch shells. She was literally blown to pieces, and her remains can still be seen scattered all over (and I mean all over) the nearby hills. 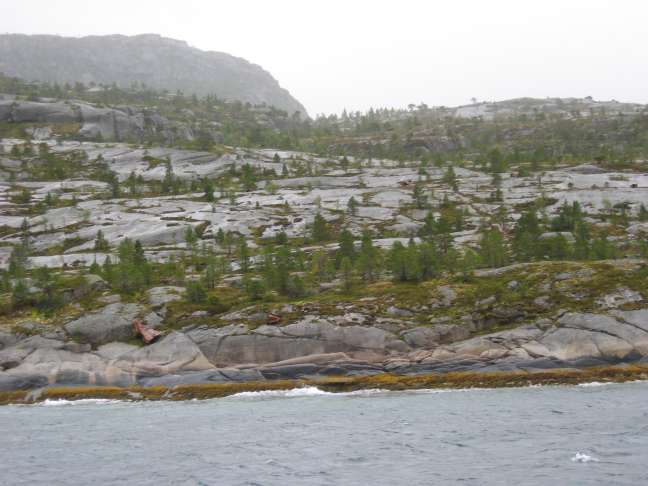 You can just see some wreckage from the Rauenfels on the hills at the bottom of the tree line.

On the 11th April Z13 was fully operational and was one of the few ships that had managed to refuel. As she was moved to her dispersal point in Ballengenfjord, the Skipper misjudged the depth, ran aground, ripped open her bottom flooding No 2 and 3 boiler rooms, her torpedo warhead room and her transmitting area. Although she effectively carried out damage control and managed to stay afloat, she was by now only fit to be used as a floating gun battery. By the time of the Second Battle of Narvik two days later, the Z13 was in the process of being escorted to Taarstadt by Z19 where she was to lay in ambush for the next expected British attack. Soon reports reached her that the British Force was already steaming down the Fjord. Z19 went ahead to asses the situation, leaving the Z13 to make her way to Djupvik in the hope of still being able to effect an ambush. 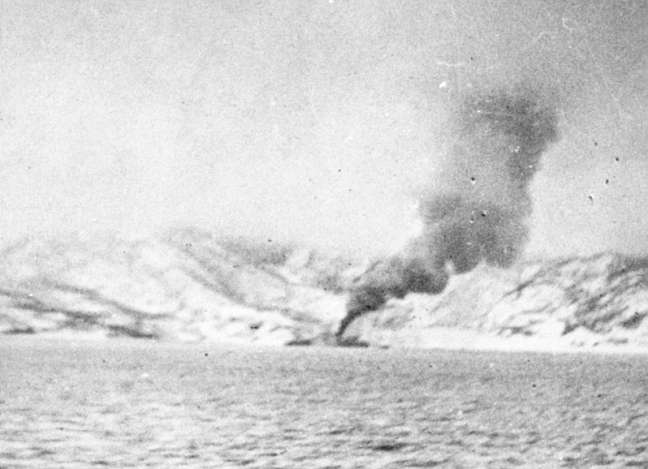 The Erich Koellner hit for the first time.

Unfortunately for her spotter planes from the Battleship Warspite reported her position, and the Tribal Class Destroyers, Bedouin and Eskimo were sent around the point north of Djupvik where they engaged the Z13 at a range of three and a half thousand yards. Unable to manoeuvre, the Z13 was an easy target. She was hit in her boilers and turbine room, and then a torpedo blew her bows off. To finish her off, Warspite came up and pounded her with two salvoes forcing her Captain to scuttle her to save needless loss of life. Even so thirty one men were killed and many more wounded. 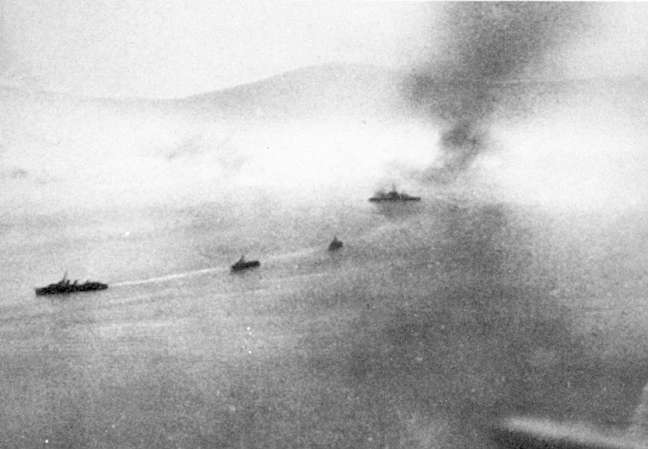 After the War the Erich Koellner was heavily salvaged and today all that is left is a huge pile of scrap, most of which is in about sixty ft of water.However just about everthing that is brass is here, especially valve chests by the ton. the real oddity however is the amount of uniform clothing that is still lying around. Jackets, shirts and some pullovers are to be found and other items are leather seaboots and shoes.There is loads of metal to pick over, and it is a great ‘grot’ dive, which would be even better if you were allowed a hammer. ( all right, I give in.) One thing I hadn’t seen before, was a shell hoist with the brass checks intact, and a round still in place. I only had about fifty mins on this wreck, so only managed to skim it. Shame. 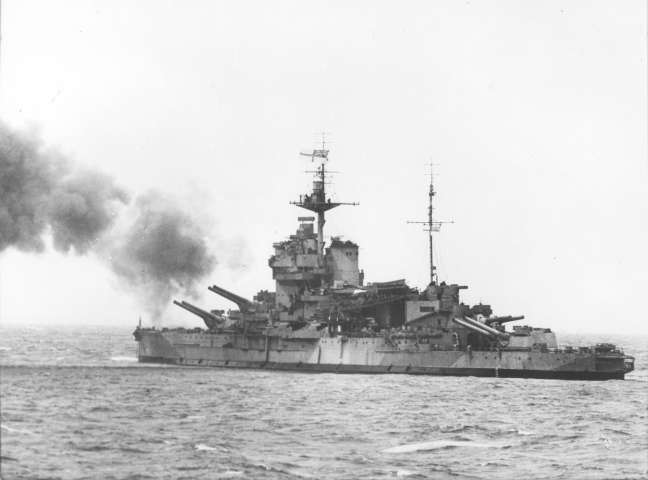