Built by the Belfast shipping firm of Hartland and Wolff in 1883, the Bay of Panama was described by everyone who saw her as probably the finest sailing ship afloat. With her steel hull, and four square-rigged masts, she was a very fast and beautiful ship of 2282 tons. But strength and good looks are no guarantee, and during March 1891 the Bay of Panama met up with the worst blizzard Cornwall had suffered for over two hundred years. It was to prove no contest. Because of her speed, the Bay of Panama was used on the Calcutta run, and on November 18th 1890 she left that port bound for Dundee loaded with a cargo of 13000 bales of jute.

For four months she sailed swiftly towards England until one morning during the early part of March 1891, she approached the Cornish coast in rapidly deteriorating weather. The Captain knew all about the dangers of a lee shore, but because of the bad visibility he was uncertain as to his exact position. He could see that the weather was unlikely to get any better, and he even thought that there might be some snow. After weighing up all the risks he decided to heave to, take some depth soundings, and generally take stock of his position. It was a decision that was to cost him his ship, and his life. Only a few hours later, in the early afternoon, a blizzard, the worst for over two centuries, swept into the West Country and engulfed the Bay of Panama. 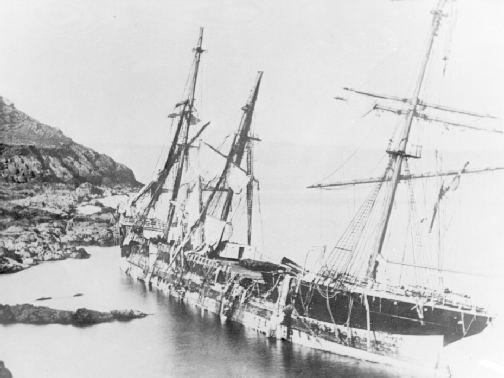 The wreck of the Bay of Panama.

On board the seamen desperately furled all the sails, and prayed that the ship would ride out the storm. On land, the driving snow and bitter winds produced freezing temperatures the like of which nobody could remember. Sheep and cows were frozen to death in the fields, and at sea many ships came to grief, including four that were wrecked nearby on the Manacles. During that night things became very desperate, and distress flares were fired off. Because of the driving snow nobody saw these, and in the early hours of the following morning, disaster finally struck. A huge wave crashed over the stern, and as it rolled forward it smashed very boat that was lashed on deck. Soon afterwards the Bay of Panama was driven headlong into the cliffs just to the south of Nare Point.

As she struck, she was swung around until her bows pointed eastwards, and then she settled firmly aground with a heavy list to starboard. Some of the topmasts fell down, and shortly afterwards another huge wave broke over the ship, sweeping away the second mate. This wave also completely swamped the main cabin, washing the Captain, his wife and six other crewmen over the side where they all drowned. By now there was pandemonium on deck. Hardly able to see in the driving snow, and soaked by freezing water breaking over the deck, the Mate took charge and ordered everybody into the remaining rigging. Unfortunately for the crew, the freezing spray that showered into the rigging turned quickly into ice, and many of them were frozen to death. During that long period before dawn, many died of exhaustion and cold, and the Ships Bosun, unable to withstand the suffering any longer, went completely mad, and flung himself off the rigging to drown in the tumultuous seas. 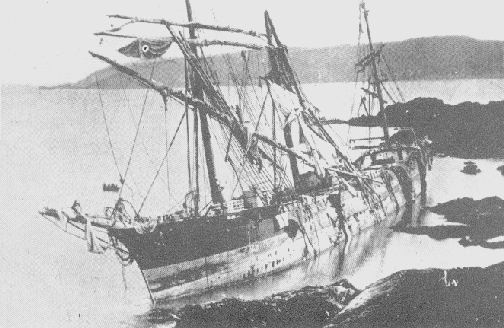 Another view of the wreck.

With the coming of dawn the Bay of Panama presented a truly awful sight. Lying hard and fast under the cliffs, her masts and rigging were in ruins. Her decks contained a shambles of cordage and tattered sails, and over the side there hung a great tangled mess of broken spars, rope, and yet more ruined sails. Even worse was the horrific sight of those men still stuck in the rigging. Some were still feebly clinging to life, but most were by now just frozen corpses. At long last a farmer out looking for his scattered sheep, came across the wreck and quickly summoned help. Soon a breeches buoy was set up, but the seamen still left alive were so weak that they were completely incapable of helping themselves. So the rescuers had to get onboard the wreck and place each man in the harness, and then ferry them ashore. In the end, of the forty people that sailed on the Bay of Panama only seventeen survived. 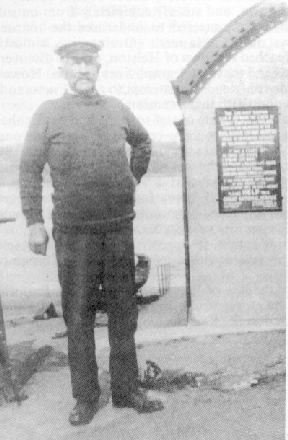 Joseph Hendy James, who broke the news of the dreadful wreck, on March 9th 1891.

However the rescue did not put an end to the hardships that the survivors had to bear. After being fed and unfrozen, the men were put to bed for the night in the village of St.Keverne. The next day, wrapped in blankets they set off for Falmouth in a horse drawn bus. But huge snowdrifts blocked the roads, and soon they could make no more headway. The men were forced to abandon the bus and carry on to Falmouth on foot. Most had no shoes, and nearly all were only clothed in rags and blankets. How they managed to struggle into Falmouth through the snowdrifts and the terrible cold is a story that has long since passed into Cornish legend. The local newspaper, The Falmouth Packet, says it all when it commented that “the men had endured as much privation in that walk as they did in the actual shipwreck”. Those words seem to just about capture the mood of this quite remarkable episode.