It always amazes me how many people seem to dive with their eyes closed. Well I do not mean acutally tight shut, just the fact that they do not see what is often right in front of them. The oft repeated cry, ‘there’s nothing down there’ can be heard echoing all over Plymouth’s wreck infested waters in the middle of the summer, and since the divers in question have usually been diving on a wreck, I sometimes wonder what they expect to find.

On a wreck like the Poulmic for instance, a porthole or two have been found in the past, but with roughly five hundred divers a year diving on this wreck it is unrealistic to expect to find very much in the way of souvenirs. Of course to the more committed wreck diver, every wreck is really a jigsaw puzzle waiting to be solved, and any brass, whilst always welcome, is usually considered an undeserved bonus. Most of the wrecks around Plymouth are quite straight forward. The ]. E. Layne and the Glen Strath Allen for instance, are extremely well documented, but the Penlee Cannon Site and the Coronation still exert a fascination for the wreck detectives years after they have been discovered. 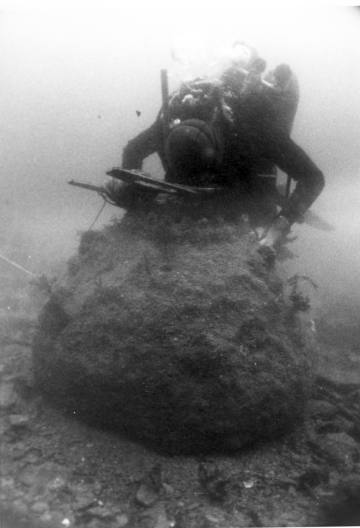 Most people think that shipwrecks just break up and fade away, and to be truthful an awful lot do. But some like the Ramillies near Bolt Tail, are nearly three hundred years old and still they live on in people’s memories, and enough of their bones are left to intrigue the modem day wreck hunters. The fascination about wrecks is that they seem to link the past with the present, and however much you dive upon them, many are still capable of throwing up quite staggering surprises. Going back to the Poulmic for example. I wonder how many people realize that the Poulmic site actually contains three different shipwrecks lying almost side by side. Surprised? Well I certainly was, especially as I quite regularly dive the Poulmic area, and only found out by a complete accident, and I am still not entirely certain what they all are. Still it just goes to show what is down there waiting to be discovered even if you think you have seen it all before. 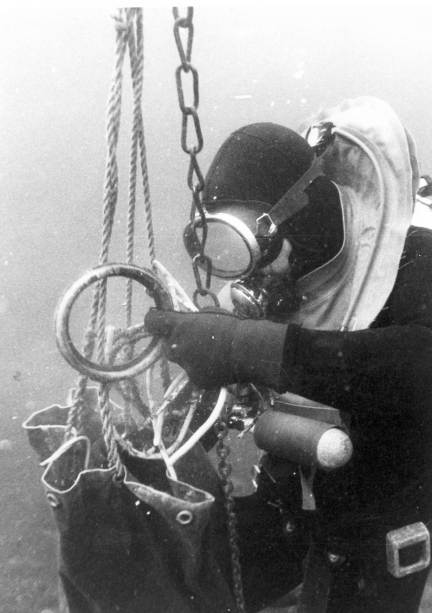 A bit of gentle scrapping.

The Poulmic lies about a mile off the Breakwater light, just outside the new degaussing range. But it was about one hundred yards closer in that we discovered the object that was to lead us to the discovery of the other vessels. The object in question was a large mine, you know the type of thing that you see on sea fronts collecting money for distressed sailors. They are usually painted red and covered with great big prongs. We were drifting the boat at the time, just having a gentle scrap dive, with two of us hanging off .the anchor rope when the anchor became snagged on a rock. When I swam along to free it, I saw that the anchor chain was happily banging up and down on a large round object half buried in a sandy gulley. The shape looked familiar, but it was only when I saw the prongs that I realised what it was. Well I can tell you that my heart certainly missed a beat or two, but almost at once I saw that there was a hole in the top and realized that after all, the mine had probably already gone ‘bang’. 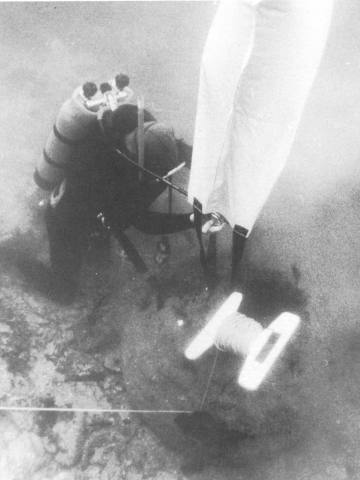 After a good deal of careful examination the mine revealed itself to be the top half of the outer casing, presumably blown off when the mine exploded during the war. Using the mine as a start point we did a circular search of the immediate area and came up with some iron wreckage. Further dives revealed that there was more sparse wreckage which eventually led to the Poulmic. Now this was very interesting because we know that the Poulmic had been sunk by a mine during the Second World War. Was this the very mine that sunk the Poulmic? It certainly seemed a possible conclusion, but could it just be a coincidence? At first I was fairly certain that this was the mine, but later research showed that at least three other vessels had been sunk in the same general area during the Second World War, and that their sinking’s had also been because of mines. I could see that we were going to get no easy answers to the puzzle, so we decided to lift the mine casing so that we could examine it in more detail.That’s when the accident happened. 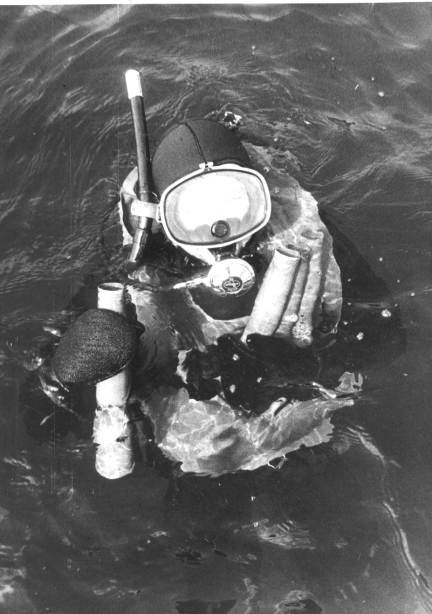 Some empty shell cases picked up near the mine.

We had fixed a lifting bag onto the casing by passing a rope through the top hole and out through a small hole in the side. It all looked secure, and the bag was quickly filled with air. The mine rose gracefully off the bottom and started to accelerate upwards. Suddenly the top [ ring, which must have been rusted straight through, pulled out from the casing and shot towards the surface. The main body of the casing faltered, and then plunged gleefully back towards the sea bed. I was right underneath trying to take some photographs, and rapidly tried to swim out of the way. Unfortunately the casing seemed set on following me, and the chase only ended when the mine settled in a great cloud of sand inches from my fins. When the dust settled I saw that my partner was busy having hysterics, so I swam in a dignified manner back towards the anchor.

It was then that I saw the remains of what looked like a stem section, complete with rudder off a small trawler. Further examination revealed ribs and more iron debris together with some broken pottery and old porcelain electrical fittings. Definitely a wreck site, and definitely not connected to the Poulmic. So did the mine blow this vessel up instead of the Poulmic, or did it do for both? Well at the moment we just do not know. But that is the fun I suppose, the finding out. The answer is lying somewhere down there on the bottom, and it is just a manner of interpreting correctly what we see, and drawing the proper conclusions. Other divers have found these wrecks before us, but they thought that it was all part of the Poulmic, because that is what they expected to see. I would have too, but luckily I found the mine, and that is what started me thinking. Looking is fun, but thinking about what you see, that’s what provides the answers. . . eventually.