Here is an account of what it was like to be on board the Glen Strathallan as a cadet, sent in by Roy Phillpot.

I was quite sad to hear the old girl was semi broken up on the bottom, but I suppose it would be a sad affair if she caused a fishing boat to sink – even though they should know where they go with modern nav systems as they are. I am not sure what more I can tell you. You seem to have done your research well, and unfortunately as a poor radio officer student, I did not have much of a camera, and did not risk it on that first trip. The few pictures I did have are gone with the various moves and family upheavals. 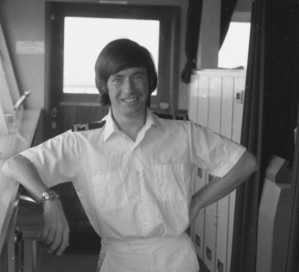 Roy on the bridge.(not the Glen)

I remember the ship sitting at Millwall dock in London, with a black painted hull – the paint being many layers thick, and applied generously over various chipped areas where the rust had been removed. Riveted hull, so that when standing on the dockside at the bow, you could see the lines of rivets curving away towards the stern. A wide well formed hull, obviously designed for strength and good sea handling. The accommodation was white – with some rust streaks, and a big yellow painted funnel – at least that is my memory, with two high I think also black painted masts and the radio antenna between them. The accommodation doors heavy, watertight, and with dark narrow stairs leading up and down into the various accommodation areas. She had been converted for carrying cadets. Our bunk area was in the two fore holds – what used to be fish holds. 2 tier bunks, with the top bunk not far from the deckhead. There was not much headroom up there!

Light was from a few deckhead light fixtures, but I remember the light was dim and yellow – each held a 40 watt bulb, it could not have been more, and was probably less. The single switch was at the entrance to the hold. Our instructor would come and turn it off around 8 or 9pm, just before the engineer turned off the steam driven donkey generator. It then became extremely dark and very silent – apart from the remarks and various pranks from our assembled company! Smoking was forbidden, so anyone wishing a smoke had to go outside. Without a torch, this was an adventure in itself! The main cabin, which was also the chart room, below the bridge, had warm dark panelling, with a number of rather dirty windows, which could be covered with heavy red curtains. These were closed when we did navigation exercises using the Decca navigator. 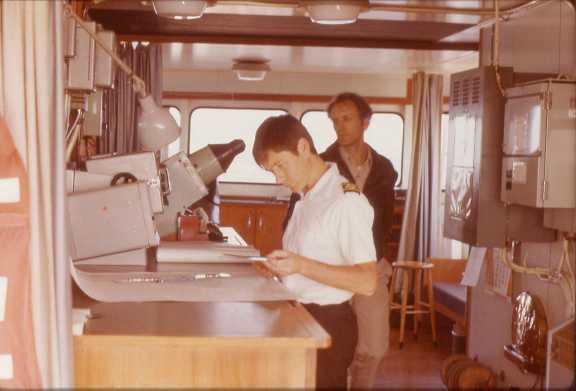 Navigating – not the Glen

From the main cabin, a narrow half winding stair led up to the narrow bridge above. Here was the wheel, engine telegraph, radar, and speaking tube to the engine room and chart room below. Maybe there was also a phone to the engine room, but I can no longer remember. I was always fascinated by how well the old speaking tube technology worked. We even had it in more modern ships I sailed in later! Simple and foolproof. We used it on the Glen Strathallan to give navigation commands to the bridge when we were “playing” navigation below.. Blow, listen, and speak. Navigation was done on the chart table at the fore end of the cabin, and at the aft end, was a longer table for school work, with bench seats. The simple old radio equipment was on the Port side bulk head and small table, with a large rotary transformer in a cupboard below. Gleaming copper tubing led up to a ceramic antenna feed through insulator on the Port side bulkhead, going out to the antenna above. 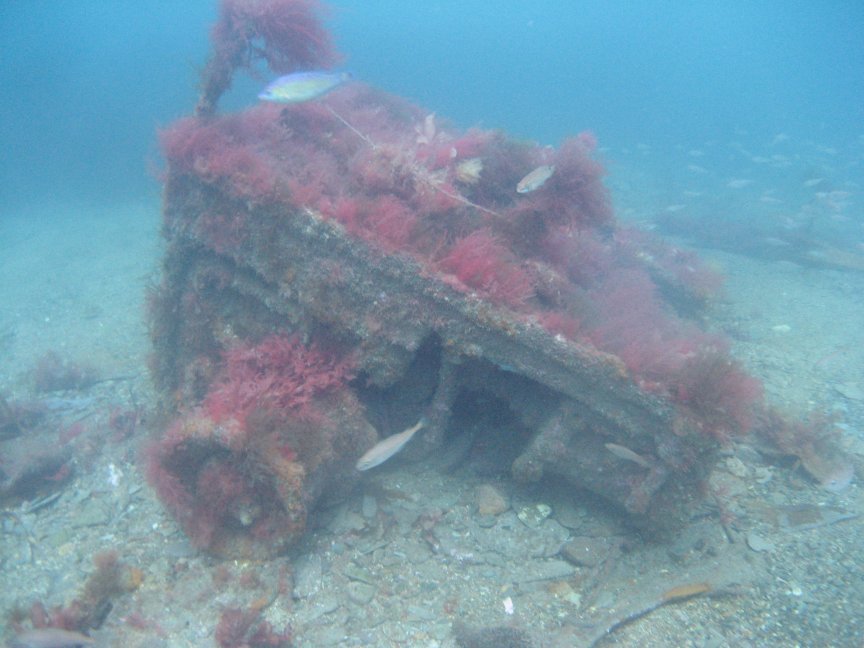 A winch from the G.S.A

I can remember nothing much more about the accommodation, I believe our instructor had his own small cabin, but I never saw it. The captain , engineer , and bosun obviously had theirs, but again I know nothing about them. The showers and toilets were somewhat primitive dark and small. I am pretty sure the toilets went straight over the side. Pressing the flush mostly brought a rusty trickle, sometimes however a loud burp and a spray of water and air. It was a bit risky using them! The engine room was something I will never forget. It was really a large space for such a small ship. Lit sparsely via the skylights, and a few yellowish glowing bulbs in safety fittings. 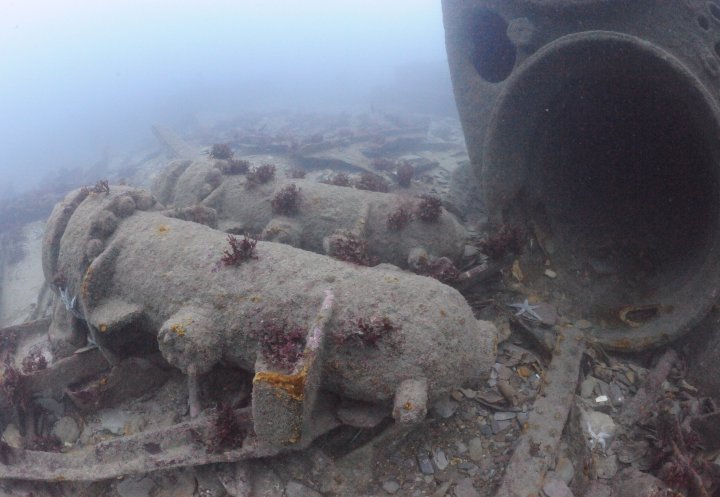 Some of the wreckage around the boiler.

The centre piece being the really huge compound triple expansion steam engine. To get into the enginroom, I think from the starboard side, was a steep narrow stairwell, this led to a platform above the steam driven donkey generator on an intermediate platform. Maybe we had a second main generator, but I only remember this one, with a large flywheel covered by a flimsy wire mesh guard, driven by a couple of pistons. The whole thing leaking steam from various joints and valves. It was surprisingly quiet, but then it probably only had a power of a few kilowatts. I remember our power supply was 220v DC. Down some more ladders to the engine room main plates. Foreward to the huge boiler and the engine controls. Various pumps, mostly steam driven, a few electric as humps sticking up from the plates. She had been converted to oil burning, so the oil burners flickered, and when running, the enginroom fans roaring and the thickly insulated steam pipes vibrating, made it seem like something from Dante’s Inferno. 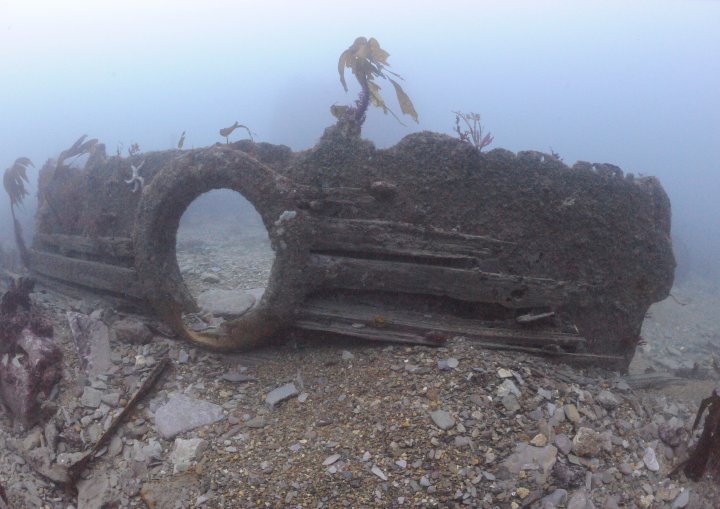 Wreckage near the stern.

We all had to do some watches down there, but it was not something I enjoyed. Wiping down the main engine in the evenings after we stopped was far better. At least then there was no high pressure steam in the pipes. I was always a bit nervous about that. On deck, we were set to chipping and painting. The paint locker in the forepeak, cramped, dim, and full of tins, tools, and smelling heavily of tar and solvents. we were only allowed in there with the Bosun, who dolled out the things we needed for our allocated jobs. He collected and checked them again when we had finished. We always had to clear up after what we had done, and the deck must be swept or hosed down. Considering her age, the ship was in good condition. The Bosun made sure she was kept that way. The deck I seem to recall was quite cramped too. Not a lot of space, and somewhat rusty. I am only 59, but all this was aroundbut all this was around 40 years ago, and the memory dims with time. I tend to mix the Glenstrathallan up with some of the other earlier ships I was on, so I cannot guarantee that the above impressions are totally accurate.