On the 21st November 1918 the German High Sea’s Fleet formally surrendered to the British Navy and were interned at Britain’s largest and bleakest anchorage, Scapa Flow. Amongst the fleet of captive ships was the light cruiser Koln which had only been completed about twelve months previously. One of the Karlsruhe class of cruisers, the Koln was officially classed by the German Navy as a small protected cruiser and to that end was equipped with eight 5.9 inch guns, two 50 calibre anti aircraft guns and four torpedo tubes, two underwater and two situated on deck just forward of the middle funnel. 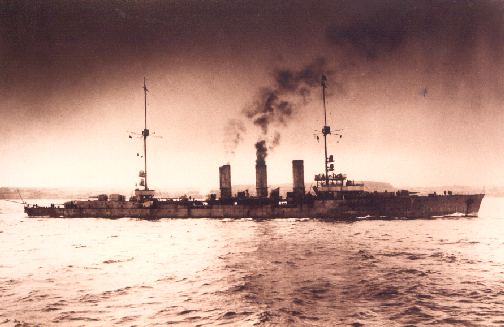 The Koln was fast, easy to steer, but leaked like a sieve in any sort of rough weather. The crew’s quarters were appalling, cramped and badly ventilated with virtually nowhere to hang or dry clothing. The men slept on a ‘hot bunk’ system, the off watch members sleeping in the duty men’s beds. In fact crew accommodation was really an after thought, the main consideration was always weaponry and ammunition storage. It was quite common to have food stacked in the passage ways and cooking facilities were extremely rudimentary. The reason for these awful conditions was the difference in the attitude of the German Navy. Their ships were hardly ever at sea for extended periods, unlike the British who had, at the time, a huge worldwide fleet, so their ships did not have the necessary facilities. The German sailors did not mind too much because the lack of sea time gave them more time ashore, so they were reasonably content with the situation. 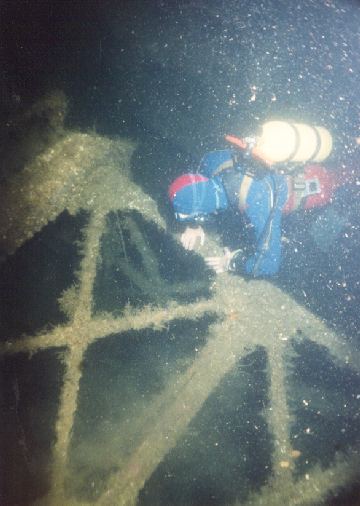 Peering into one of the holds.

However once interned in Scapa Flow and forced to live aboard permanently, the Koln’s shortcoming became horribly apparent. Personal hygiene became almost non-existent due to the lack of enough water and the least said about the toilet facilities the better. Since their own food rations and spare equipment were soon used up, the German crews became dependant for absolutely everything on the British, who with their usual bureaucracy, fouled things up. There was never enough food or drinking water and of course no coal. Without coal there was no means of generating power and so the Koln became an inert lump of freezing, insanitary metal. Her crew, close to despair, grabbed at the one chance that would enable them to not only better their miserable conditions, but also embarrass and humiliate the British. The idea was quite simple and the German sailors seized their opportunity and scuttled the entire High Seas Fleet, including the light cruiser Koln.

Nowadays the Koln, like so many of the other vessels, lies on her side in about 105 feet of water. The visibility at this depth is usually very good and as you fall down the anchor rope you soon see the huge bulk of this once proud ship emerge from the darkness. Although largely intact, the Koln has now started to break up. There are not as many guns on her as on some other wrecks, nor is there as much brass in evidence, but she is extremely picturesque. We landed on the forward part of the ship and swam at first over to the bows past the main anchor capstans and what looked like a gun mounting spindle. After poking around for a while, we then swam back to the bridge and saw the masts and rigging still intact, lying strung out across the sandy bottom. The crow’s nest was still in one piece and as we swam towards it, we saw attached to part of the rigging a large For Sale sign. It had not been there all that long, just long enough to gather some weed. I don’t know who put it there, but I bet the ‘old crew’ would have thought it very appropriate. 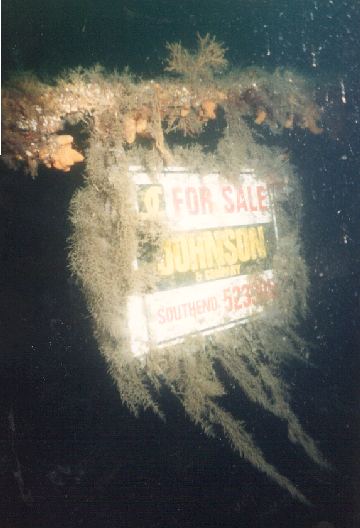 Further along was a large opening and peering inside we could see light coming in from the bottom of the ship some thirty feet below. As we swam down into this vast cavern, we could see, amidst the huge scrap yard of twisted metals, coils of lead covered wiring and a jumble of smashed up brass turbine blades. As we came out of the bottom hole onto the sand, we felt so pleased with ourselves that we just had to go and do it again. If only we had more time to explore the rest of the interior. Back up on deck we came to one of the more pretty parts of the wreck. One of the companionways stretching back aft from the bridge had become a jumble of broken railings and upright supports that had arranged themselves into a sort of iron tent, with lots of skylights. Pieces of seaweed clung to parts of the structure reflecting the sunlight onto the large anemones that proliferate on this wreck. The whole effect on a sunny day is quite spectacular and for a while it actually took my mind off looking for portholes. Talking of portholes, there are plenty of them about, but all the ones I saw were made of iron and they studded the outside of the huge hull like a rash of unsightly blisters. When viewed from the side, the vast iron walls, with their pockmarked craters, looked like something out of ‘Star Wars’. 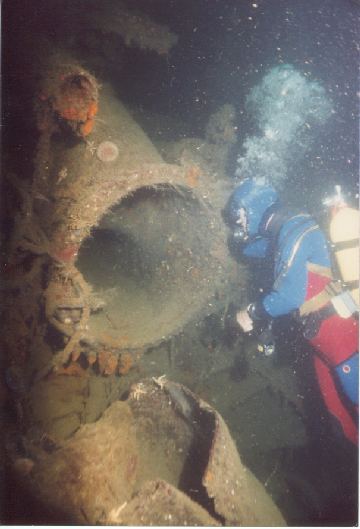 Looking into a mass of iron pipes.

Back on the sandy bottom we found more holes to peer into and a great mass of iron pipes with large brass end fittings. All around us were the remains of smashed in bulkheads, with their supports rearing up fifty feet or so to the surface. With the surface light shining through making weird patterns on the sand, you feel that really it is just too much. The sheer bulk of these ships just has to be seen to be appreciated. The huge walls of steel with their gaping cavernous holes just lead you on and on from one visual experience to another and even if you are not a wreck fanatic, you cannot help getting caught up in the experience. The Koln is not the best wreck in Scapa, but it is manageable and when you finish your dive on her at least you will have seen most of her and be prepared for the massive battle cruisers that lie just a bit further along the anchorage.