Like a huge sea monster, the vast iron hull of the German battleship Konig suddenly appeared out of the gloom as we swam down the shot rope towards her. I knew that the Konig was going to be a large wreck, but even so I as completely unprepared for the sheer enormity of this vessel and for the way it seems to project its personality, lying there on its side like some stricken dinosaur from another age.

In its day however, the Konig was far from being a dinosaur and was in fact just about the last word in German naval technology. In the Imperial German Navy created by Grand Admiral Tirpitz in the early 1900’s, Germany had finally found a suitable symbol of her new and growing power. The navy was determined to build a fleet large enough to frighten off the British and the Konig represented the penultimate of the first generation German dreadnought battleships.

Built in the 1911 construction programme at Wilhelmshaven, the Konig was the ‘name’ ship of her class which included the Markgraff and the Derflingger. Displacing a massive 25,000 tons, the Konig was 573 feet on the waterline and nearly 97 feet wide. In places her armour plating was 14 inches thick and she had the ability to withstand huge amounts of shell and torpedo damage because of a sophisticated damage control system which enabled massive amounts of water to either flood complete compartments such as magazines, or totally drain compartments badly holed and taking in water. This damage control system was rigorously practised by the crews, who each year had to take part in a flooding exercise which actually included filling up a few compartments. The experience that this gave the crews paid off handsomely later on at the battle of Jutland. 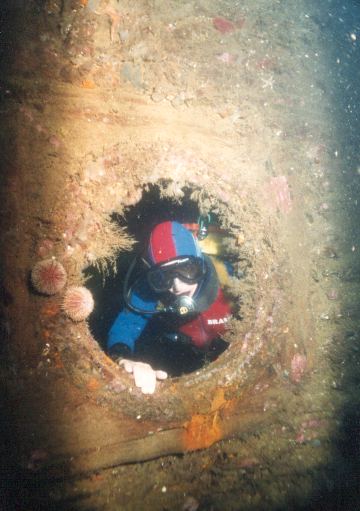 One of the Konig’s massive portholes.

The Konig’s armament was awesome. Five armoured turrets, each containing two twelve inch guns could all be fired on the centreline, delivering a broadside that totalled over nine thousand pounds. As well as these five turrets there were fourteen 5.9 inch guns arranged down her sides, four 3.9 single anti aircraft guns, three torpedo tubes fitted at the bows and two at the stern each carrying up to ten torpedoes. It was no wonder that Rear Admiral Behneke chose the Konig to be his ‘flagship’ when he led his battlefleet to its historic confrontation with the Royal Navy at the battle of Jutland.

Alas for the Konig those heady days of glory lasted only a few short years. How the Battlefleets maneuvered and the politicians postured is now history. For the Konig and the rest of her kind, oblivion came on the 21st June 1919 when at Scapa Flow they pulled out the seacocks and deliberately sunk one of the mightiest battlefleets the world had ever seen. "Disgraceful" and "humiliating" have been some of the adjectives used to describe that memorable event. But if the scuttling was meant to save the German Navy’s honour, then it might be argued that they succeeded, for when you clap eyes on one of these gigantic ships you just cannot fail to admire them and wonder about the people who built and fought in them.

Another view of the Konig.

Nowadays the Konig lies in just over 100 feet of water, heeled right over on her side. On the day we dived on her the shot rope had bedded into the sand, and so what we were looking at was the bottom of the hull. In order to get to the main deck we had to swim fifty or sixty feet back up the hull until suddenly we reached the edge of a steel precipice. Looking down we could see the main deck plunging back into the murk, like the outside of a block of flats. As we carefully swam down, the first thing we saw was a huge gun turret, completely intact. As we swam around it, puffing air in our excitement, there, off to the left was another turret and what looked like another smaller gun. It was absolutely fantastic. There were these huge guns hanging sideways on a vast plain of metal, looking so real that at any moment you expected them to start swiveling.

One of the Konig’s smaller guns.

After the turrets we came across the after mast and one of the ‘fighting tops’ that were used to spot the fall of shot. These again were intact if a trifle full of iron rubbish. Still some voice pipes are still there, and there are lots of brass tallies and wheels with German labels and it is very easy to get in and out. Once away from the masts we found some smaller guns in open mountings, which looked like anti aircraft guns and seemed almost ready to fire with their brass calibration rings and breach blocks still dully shining in the clear water.

As we left the guns, we began to realise that the sheer size of this ship just has to be seen to be believed. In fact you really ‘feel’ it rather than see it, because the ship is so vast. With time and air rapidly diminishing we swam back along the top (actually the side) of the hull along lines of gaping portholes set in a gigantic iron plain that seemed to roll on forever. There is no question about it, the Konig is without doubt one of the greatest wrecks I have ever seen. She’s got size and she has got atmosphere and she has still got a lot of secrets. I only saw about a third of this ship and I hate to think what I might have missed. Still it gives me a good excuse to have another go and if you ever get up that way, I strongly recommend that you do too.