Although the Scilly Isles has had many awful shipwrecks, one of the worst was the S.S.Schiller, a German ferry which hit the Retarrier Ledges in 1875. The Schiller was one of the largest vessels of her day, and was making a fast transatlantic passage from New York to Hamburg via Southampton. She was carrying a cargo of sewing machines, gold coins, 254 passengers and 118 crew. 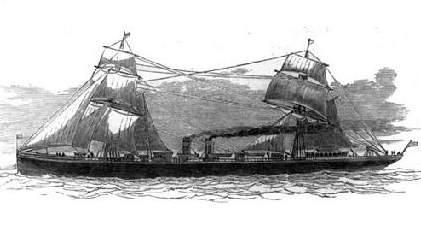 The S.S.Schiller ( from a drawing by Gibson ).

On the evening of the 7th May, the Schiller was somewhere off the Scilly Isles and encountered thick fog. She slowed to 4 knots, and her lookouts kept watch for the reassuring sight or sound of the Bishops Rock Lighthouse or foghorn. Neither were seen, and the Schiller slowly crept inside the Bishops Rock and struck the Retarrier Ledges. The Captain managed to reverse off the reef, but two large waves smashed the ship broadside to the ledges and the hull started to break up. 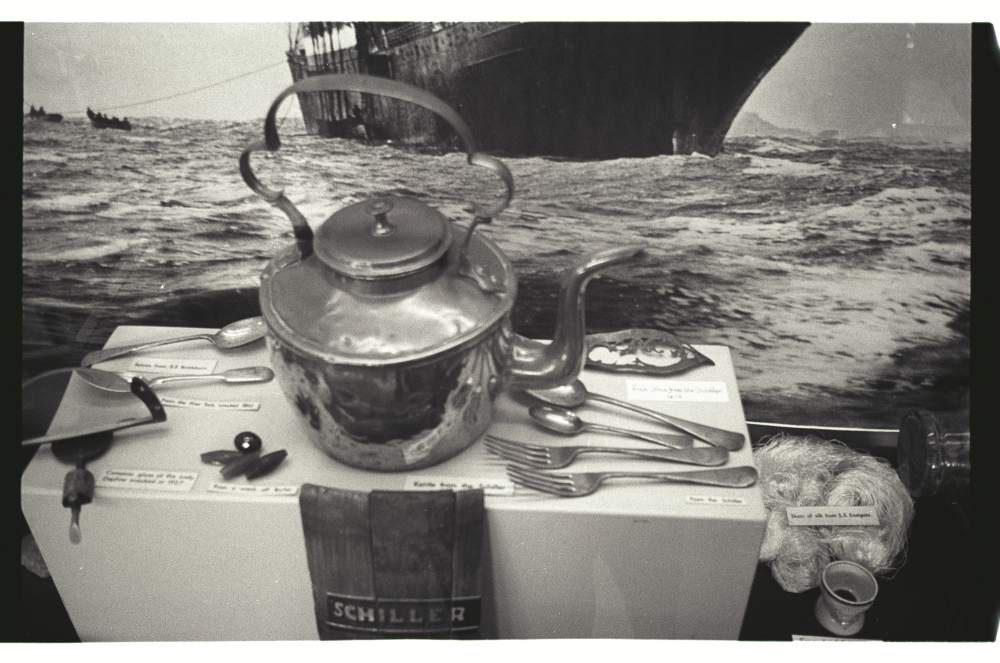 Artifacts from the wreck in the St Mary’s Museum, Scilly.

Many of the lifeboats were fatally damaged when the Schiller struck, being ground against the rocks, and most of the others were found to be defective due to poor maintenance. As some were cut loose, they just fell into the sea with all their passengers and were crushed between the ship and the rocks. Panic spread and there were extraordinary violent scenes, with men pushing away women and children from the boats so that they could save themselves. The crew were just as bad, and many of the women and children took refuge in the main cabin. Their relief was short lived as the roof was torn off by a huge wave, which sucked all the women and children out onto the deck, where more waves threw their bodies into the sea and drowned them. 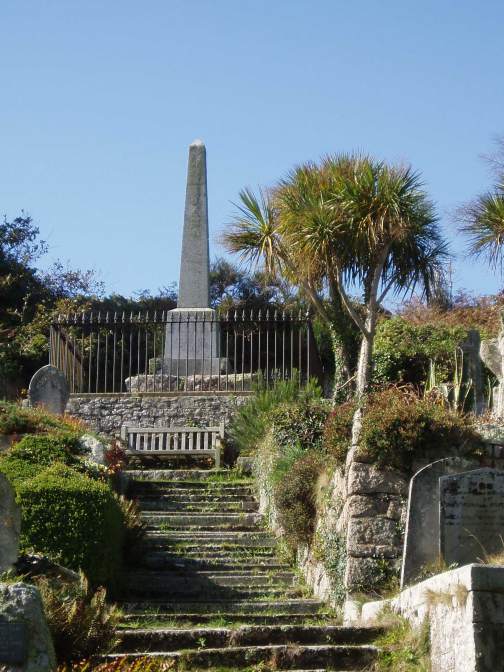 The Schiller Memorial by Sally Sharrock

The Captain tried to restore order by firing into the rioting passengers but it was no good. In the end only two boats bearing just 27 people managed to get away. As the Schiller started to slip further into the water people took to the rigging where many were killed or maimed by flying chains and other sailing gear. The Captain had ordered signal cannons to be fired to notify those on shore of their distress, but they were mistaken for requests for a pilot cutter. However at daybreak a cutter from St. Agnes, set out to investigate more reports of gunfire and were shocked to come across the remains of the Schiller. They picked up five survivors and rowed back to St Mary’s to raise the alarm. 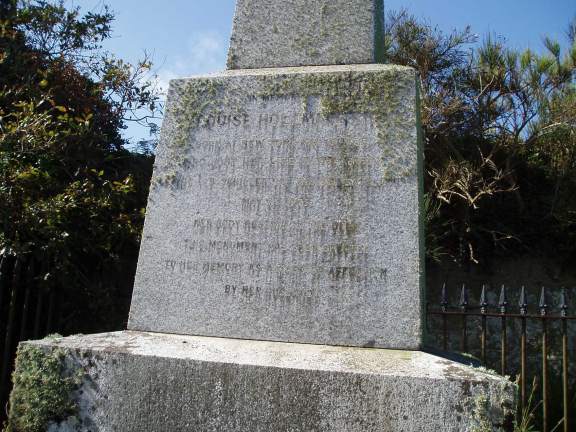 The Inscription on the Memorial reads:

In memory of Louise Holzmaister. Born at New York May 15th 1851. Lost her life in the wreck of the SS Schiller off the Scilly Isles may 7th 1875. Her body resting in the deep. This monument has been erected to her memory as a mark of affection by her huspand. 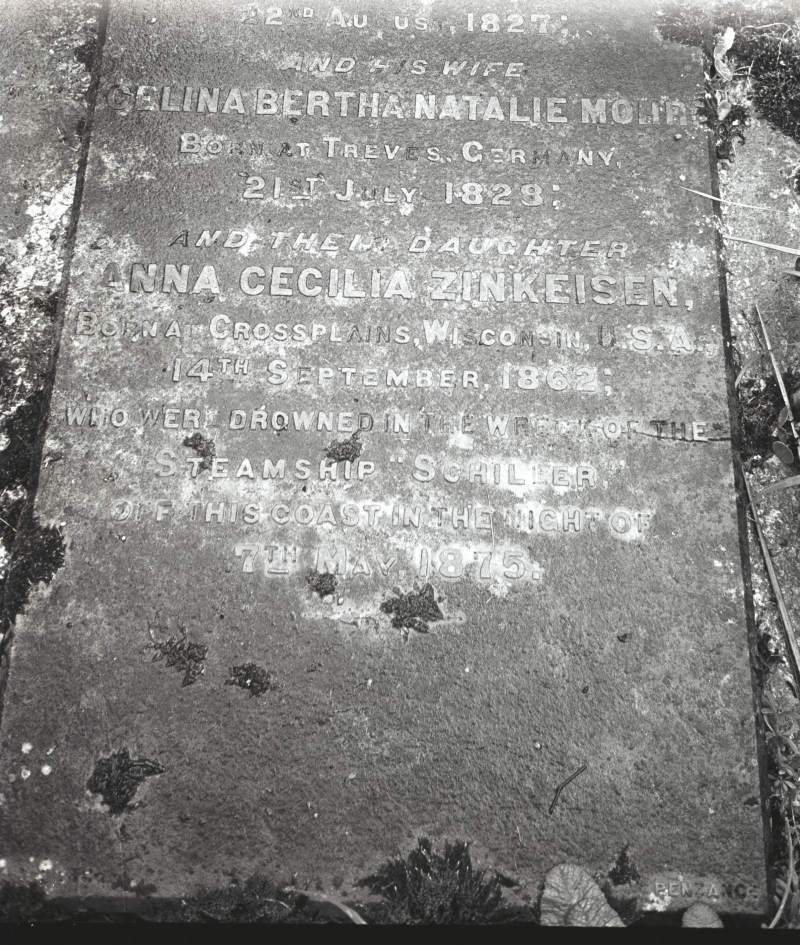 The Mohr family, all lost. 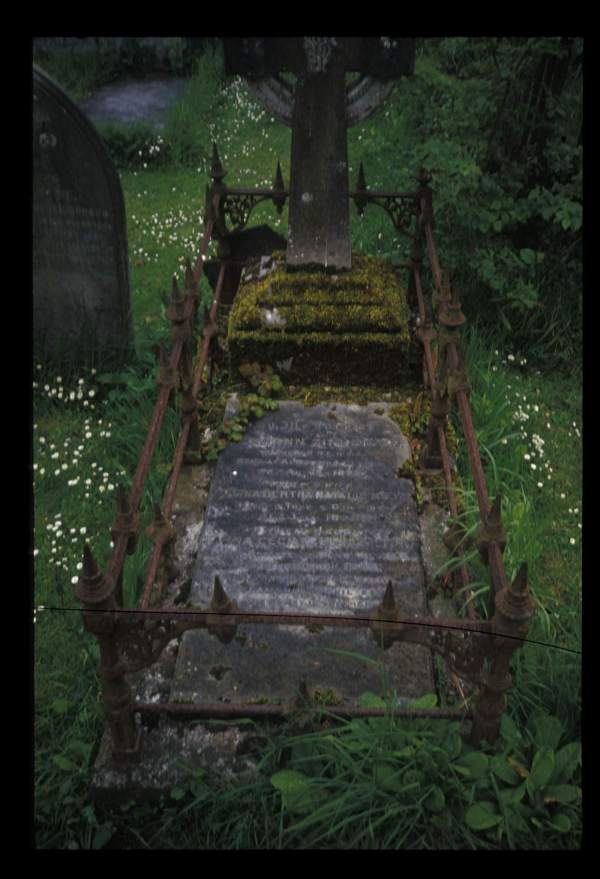 The Mohr family, all lost.

Boats came from all over to try and find survivors but they were few and far between. Some people had managed to get to the small uninhabited islands and were rescued but for the rest hope had vanished. The boats searched for hours but all that was left were lifeless bodies and ships debris floating on the water. Of the 254 passengers and 118 crew only 37 survived. None of them were children.

The Scillonians took great care to gather as many of the bodies as possible, identify, and bury them with reverence and dignity. So impressed were the German Government, that when the Two World Wars broke out between England and Germany, orders were sent out to prevent bombing or attack of the islands in recognition off the kindnesses that the Islanders had shown their countrymen all those years before.

I am extremely gratefull to Bryan Donohue for the following photos and information about his great great grandfather, Louis Beald, who was a cabin boy on the Schiller and survived its sinking.

Bryan Donohue says….The photo of Louis Beald in the irrigation colonization group photo is from his volunteer / charity work. He was a Master Mason in the Freemason fraternity. Many of his contributions throughout his life were to make this world a better place to live in by making something out of nothing and leading people to follow their dreams by teaching them to use their abilities to better mankind as a whole. Two of his sons had also became Freemasons as well, and their wives, members of the Northern Star.