The most seaward rock north west from Bryher is the Maiden Bower, and on her rocky crest many a ship has foundered, usually in thick fog. Around midnight on the 16 April 1894 fog again shrouded the Maiden Bower tricking the 1300 ton steamship Zelda into grounding hard and fast upon her. The Zelda, outward bound from Liverpool to Palermo was carrying a general cargo and some 32 passengers and crew when she struck. Luckily they all managed to abandon the vessel without mishap, and were rescued by two local Gigs who had set out from Bryher upon hearing the Zelda’s mournful siren blasts. Unfortunately the Zelda, which was on her maiden voyage, very quickly broke up and sank, and by the morning nothing remained to show that she had ever existed. However her Master Capt. Pace was exonerated from any blame in the subsequent inquiry, and later almost all the Zelda’s cargo was salvaged by divers who worked successfully on the wreck for many weeks. 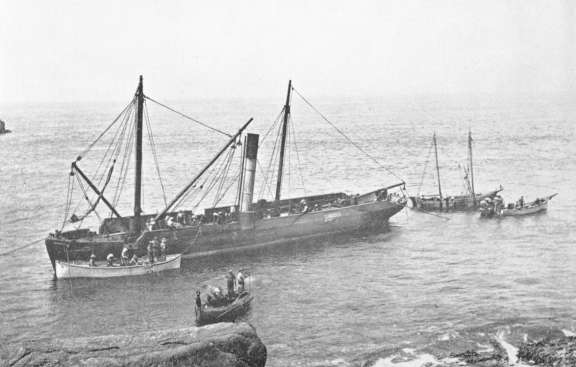 The Zelda is an extremely good wreck dive and now lies in 50 feet of water smashed into pieces on the huge rocks and gullies that make up the bottom of this patch of seabed. Although well broken up there are still quite large pieces of wreckage scattered over a fairly wide area, and surprisingly there are still some brass bits and pieces left on the wreck. One of the main features is the Zelda’s large iron propeller still held by it’s A bracket. This is a most impressive sight and really sets the whole tone of the wreck dive. You can spend a very happy time poking around the wreckage, but if it starts to get boring you can move on to the other very strong feature of this site.

The feature in question is a large gully that leads to a small hole just big enough to wriggle into. This hole turns into a tunnel that leads about 20 feet up through the rock face till you come out of another hole. It’s not at all dangerous, but it is very scenic, and makes for a great piece of diving. The most disappointing part of the dive was the absence of seals. All round the rocks were small colonies of seals, but they were obviously wary of us, so they did not join us in the water, which was a great shame because we had all been looking forward to diving with them.