During the Great War the opposing armies soon became locked in the bloody stalemate of trench warfare. Each few precious yards won from the enemy exacted a terrible toll in human lives, and soon it became obvious that any victory on land would be nigh on impossible without some major destruction of the enemies supply lines. The Allies had the iron shield of the British Navy, unbeaten since Trafalgar. But the Germans, unwilling to run the risk of a full blown war at sea perfected another weapon, the undersea boat, and this nearly cost the Allies the war. Dismissed by the British as a weapon of no account, the German Navy used these boats to great advantage and all but secured the downfall of the Royal Navy by rendering her much vaunted Dreadnoughts so impotent that they were mostly reduced to hiding in the remote fastness of Scapa Flow.

Cramped,frail, and dangerous to operate, the Captains of these U.boats often became national heroes, and even our own respected their courage and skill. However for a U-boat Captain to gain honors he had to sink ships and one of the favorite killing grounds was the area between Start Point and the Eddystone. Nearly all the convoys had to pass this way and all the U. Boat had to do was wait for a dark night and choose the slowest target. Christmas Day 1917 had passed quietly for the crew of UB.35. Carols had been sung and Captain Stoter had issued a round of schnapps from his own private stock to his crew. So far their trip had been quite successful and morale was high because they had just received orders to patrol the lucrative area between the Eddystone and Start Point. There were high hopes of more sinkings to come. On the evening of the following day, December 26, UB.35 was lying quietly on the surface, her silhouette hidden by the gloom of the land, when her Captain spotted a vessel approaching. That ship was the Norwegian steamer the Skaala. 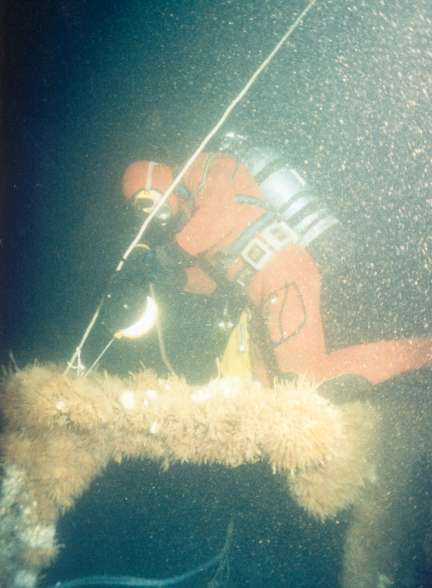 Its dark down here.

Built in 1906 by the Bergens Mek, Vaterksted of Norway, the Skaala was 229 feet long with a beam of 35 feet and displaced somel129 tons. En-route from Port Talbot to Rouen she was carrying a cargo of coal briquettes. As she steamed slowly past Bolt Head, Captain Stoter made his preparations carefully and maneuvered his vessel into a position where he could use his bow tubes. All he then had to do was wait and count. As the Skaala unknowingly sailed straight into his sights, the U-Boat Captain ordered one torpedo loosed and the other made ready. His caution was not needed. U.B.35’s first torpedo sped silently towards the Skaala and burst fair and square on her starboard side. Mortally hit the Skaala started to settle and all her crew, save one killed in the explosion, abandoned ship and took to the lifeboats.

U.B.35, satisfied that its work was done, crept away in the dark and made ready to stalk yet another victim. Today the Skaala lies more or less upright on a bed of sand and shingle facing roughly north west at a depth of about 47 meters to the sea bed. The damage to her starboard side caused by the fateful I torpedo is plainly visible, and although the rest of the vessel is in quite good condition, parts of her superstructure have now started to collapse especially around the engine room area. One of the things I always like to see on a wreck is a propeller, and the Skaala’s is still there, which of course means that it is unfortunately made of iron. Even so it is well worth a look.As you swim along the deck you will come across quite a lot of fishing tackle and it is easy to get caught up so a sharp knife is a real necessity. 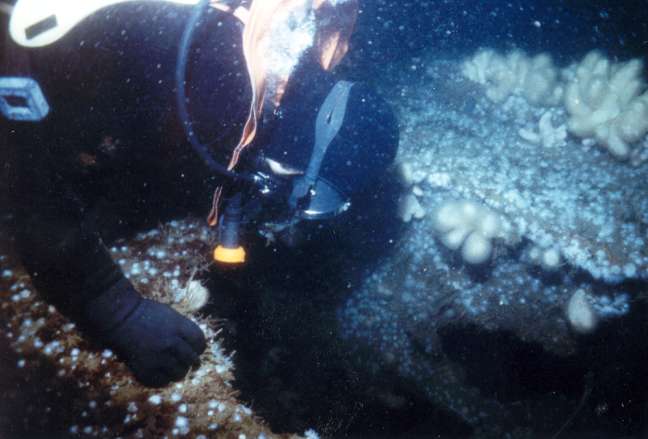 The holds are very dark.

The holds are open, very large and very dark. Across the top of the second one back from the bows is a small boat about twenty feet long. At first I thought that it was one of the ships lifeboats, but later I was told that it was the wreck of a fishing boat that had foundered some years later and had just happened to sink right on top of the Skaala. Scattered around the wreck on the seabed are the remains of the cargo of coal briquettes. For their size they are quite heavy and are stamped with a crown and the word Cardiff. You could still use them on your fire, but you would probably be better off varnishing one and using it as a door stop With the Skaala being so deep you really only get a snapshot of this wreck, and even after two or three dives it is still difficult to orientate your self. Still first impressions are of a large wreck, virtually intact and upright, easy to get around and inside if you have a mind to. The fish life on this wreck is not as good as say the Maine, but judging by the amount of fishing tackle, and its popularity as a fishing mark they must be there somewhere. All in all a very good dive, but one for the more committed deep wrecker.