If you take a train ride from Plymouth to London the train slows right down as it approaches Dawlish and runs along the coast for a few miles, and then enters the Exe estuary. It’s all very scenic, but in the winter months can be a bit fraught as huge waves often wash right over the train. Along one bit of the run, as it nears Starcross, you can see a forlorn looking wreck with a bit of mast sticking out of the water near the railway lines. This is all that remains of the Cardiff steamer, South Coaster. 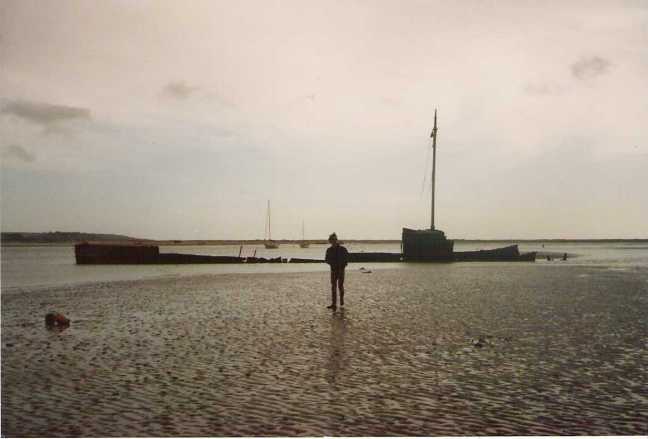 Built in 1916 by John Berg of Delfzijl in the Netherlands, she was originally called the Oostvoorne, then a few years later, Cwea, then the Martin, until finally she ended up with the name South Coaster. She was registered at 513 tons and at the time of her stranding her managing agents were G.J. Livanos of London. In December 1943 the South Coaster had been chartered by the Admiralty to carry coal from Marsden to Exmouth. Now Exmouth is not the easiest of harbours to get into because the channel is very narrow with a large sand bar to one side, and guarded on the other by the Pole Sands. Many ships have run aground here, and the South Coaster was happy to follow their example by going hard aground on the eastern edge of Pole Sands on the morning of 13th December. 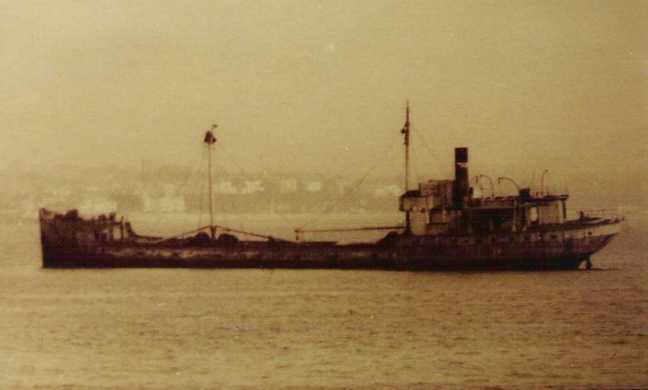 No damage seemed to be done and the local Naval unit sent a landing craft and a tug to see if they could pull her off. However try as they might nothing would shift the South Coaster. After eight days they were still trying, when a south westerly gale blew up in the early hours of the morning, and fearing the worst, the skipper who was still on board with all his crew asked the navy permission to abandon ship. By this time things were getting much worse with big seas breaking against the side of the stranded coaster and the Navy asked the Lifeboat to assist. With great difficulty the Lifeboat managed to get alongside and rescue all thirteen crew. The storm however must have loosened the ship because sometime later Admiralty tugs managed to re-float her and beach her in her present position, in the shallows close to the main railway line. 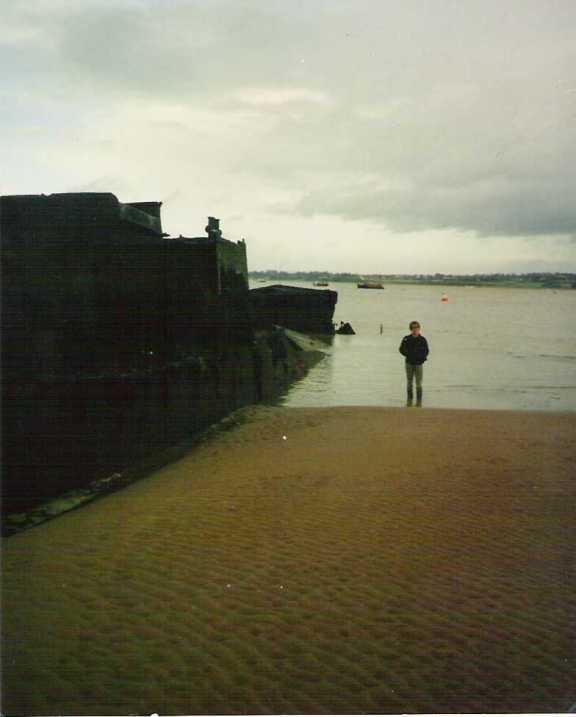 She is quite big close too.

The storms had damaged her so much that it was uneconomic to repair her, and so she was cut up for scrap. Although the wreck is awash at high tide, at low tide you can easily walk out to her over the mud flats. At Starcross is the excellent Anchor pub. If you walk up the road from there you will see the railway line and a crossing point that leads to a small beach. The mud flats stretch nearly all the way to Exmouth, leaving just small narrow channels and the whole area is alive with huge flocks of birds, especially Oyster Catchers,Dabbers, and if you are really lucky Advocets. The walk out to the wreck can be a bit of a bind as the mud is really sticky and it’s easy to loose a welly. Also you should avoid lots of little tile shelters and old bits of clome pipe. This is not discarded rubbish but a very effective form of crab trap. 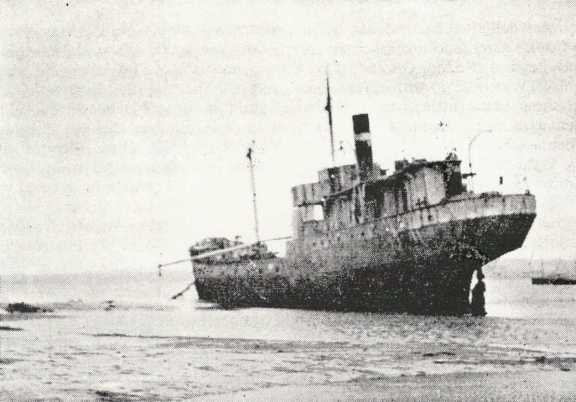 Once at the wreck you will be surprised at how big she is. From the outside her bows and hull are substantially intact, and once on board the wreck you can see that there is more inside than shows above the mud. The forward hold is easily recognisable and you can climb along what’s left of the side decks to what’s left of the main superstructure. The mast that you can see from the train is really just part of one of the loading booms and was lashed to the wreck to act as a marker. Aft the ships deck is smashed in but the shape of the bottom of the hull is plain to see, and outside you can still clearly see where the prop was, and in fact the brass collar around what is left of the prop shaft is still there. On the seaward side of the wreck is quite a large scour in the mud, and sometimes you can find bits and pieces like door fittings, brass foot plates, and the inevitable broken pottery and electrical fittings. It all depends on the tides however, as the scour seems to change shape and position with every new tide. 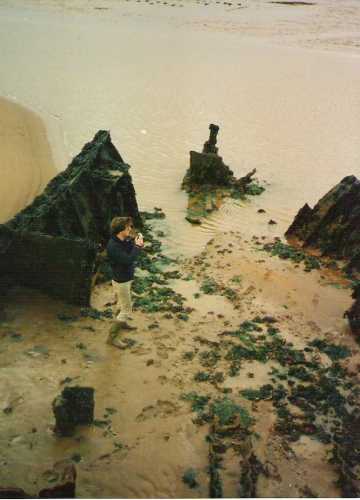 Parts are well broken up.

Because the area is so flat you have to watch the tides very carefully, as the sea rushes back in at a tremendous rate and it’s easy to get caught. Also a word of warning about the trains. They hurtle past the crossing as high speed, so stand well back so as not to be dragged into their side. There was a tragic accident further down the line on the seafront, so don’t get complacent.

I am gratefull to Mark Urry for the following information and photo The “South Coaster” was the first ship my father commanded after obtaining his Master’s certificate. As an armed merchant ship designed to protect unescorted coastal convoys she carried raised gun platforms on the fo’csle and the poop deck, and also had circular gun nests mounted either side of the bridge. These platforms were salvaged for use elsewhere when the ship was declared a total loss. 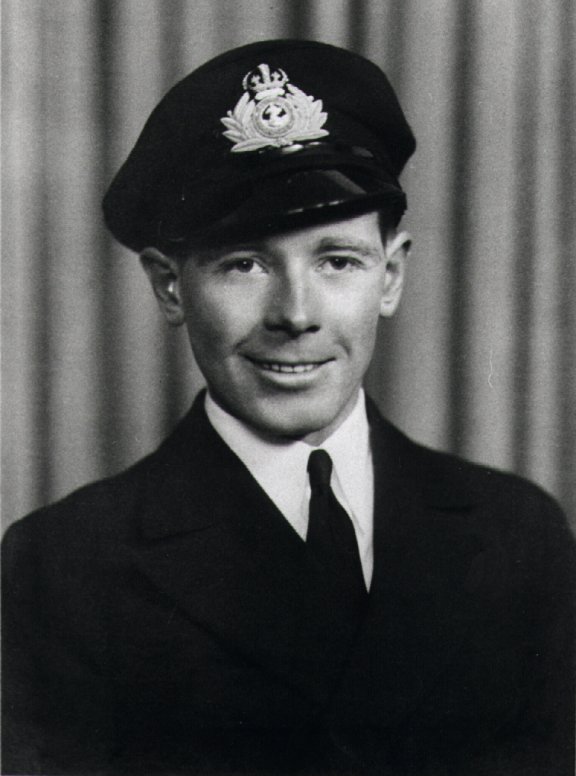 The photo shows Marks father in his new Captains uniform about to join his first command, the “South Coaster”. She was mostly plying coastal waters with coal and supplies for the military. The “South Coaster” was grounded shortly after he left her to join his second ship. Capt Urry was eventually disabled by a dive bomber attack on his ship while berthed in Shoreham. Unable to continue his career at sea he retrained as a teacher of Art and Navigation. Right up until his death in Poole, he remained a very keen yachtsman and often returned to pay his respects to the “South Coaster”. His last visit was in 2001. The Anchor Inn at Cockwood When you have finished your exploration of the wreck go back up the road a few hundred yards to the tidal harbour at Cockwood and have a drink and a meal at the Anchor Inn. It is over 450 years old and was once a seamens mission. Inside the original part of the pub is very cosy with wooden booths with their own fireplace. 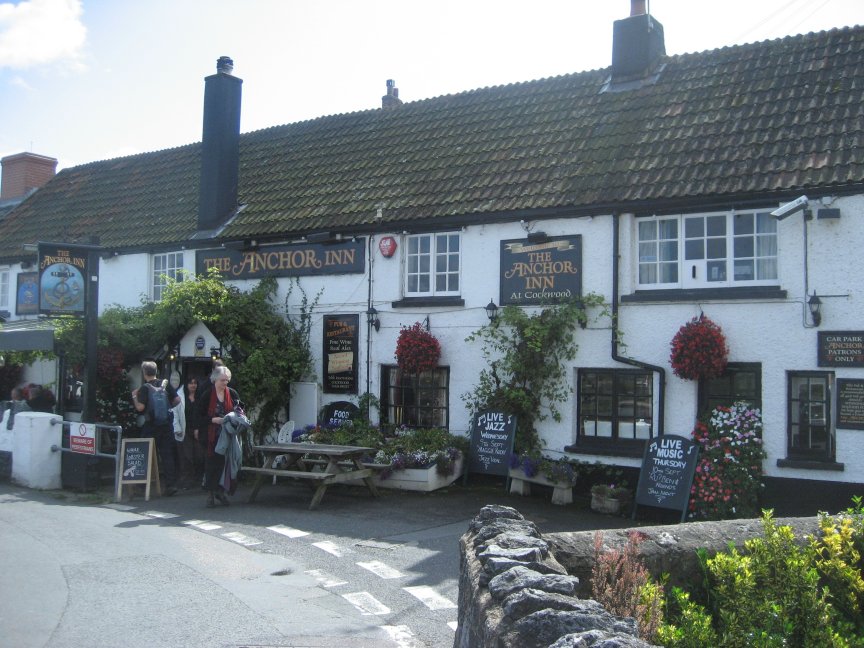 Recently the pub has been extended to incorporate more dinning area’s with a lot of nauticalia as its theme. The meals here are great, and whilst they do most things, it is the fish that all the locals come for. Forinstance they can do scallops 28 different ways. While you are browsing the menu have a nice pint of Otter Ale. 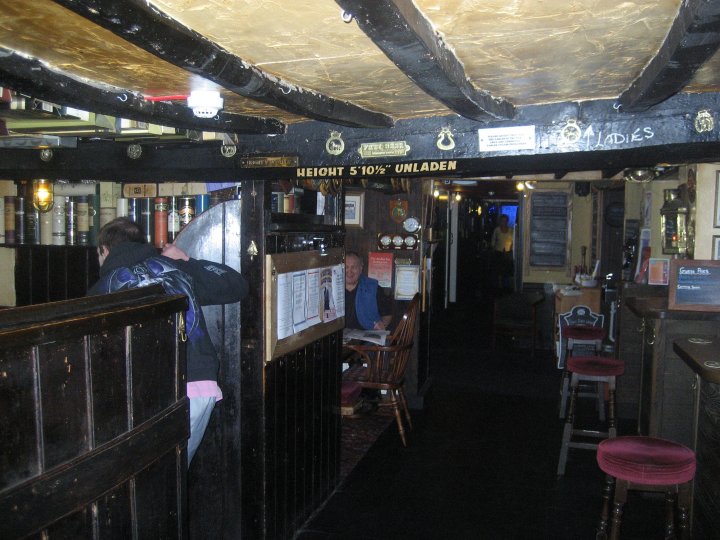 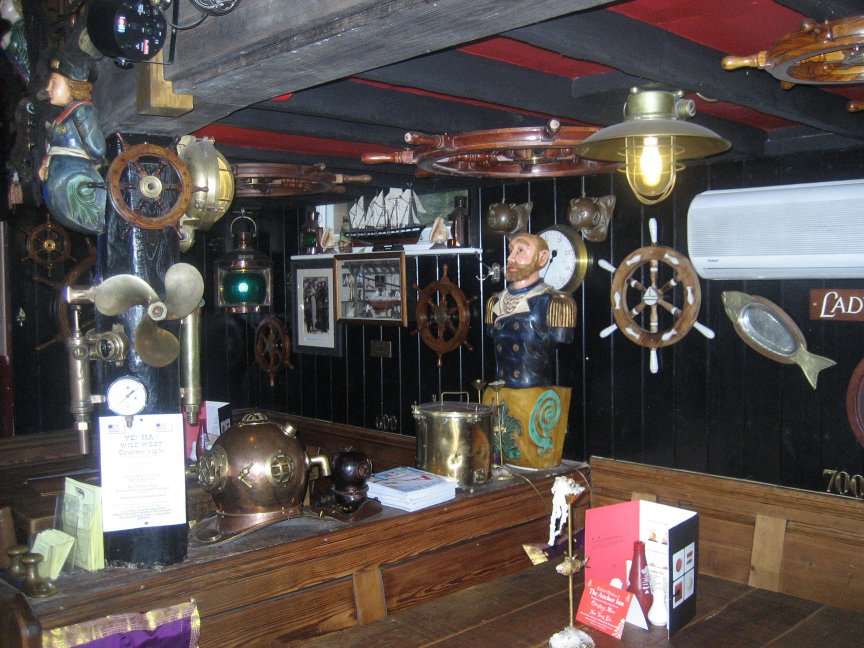