On the 29th March 1930, the submarine L 1 came adrift from its tow and drifted without fuss onto the rocks at Penanwell Cove, near Porth Nanven in Cornwall. The submarine, a veteran of the First World War, had been launched by Vickers at Barrow in 1917 and at the time of her stranding had been on tow from Chatham to Newport in Wales for the purpose of being broken up for scrap. It wasn’t worth trying to refloat the submarine, so she was scrapped where she lay. 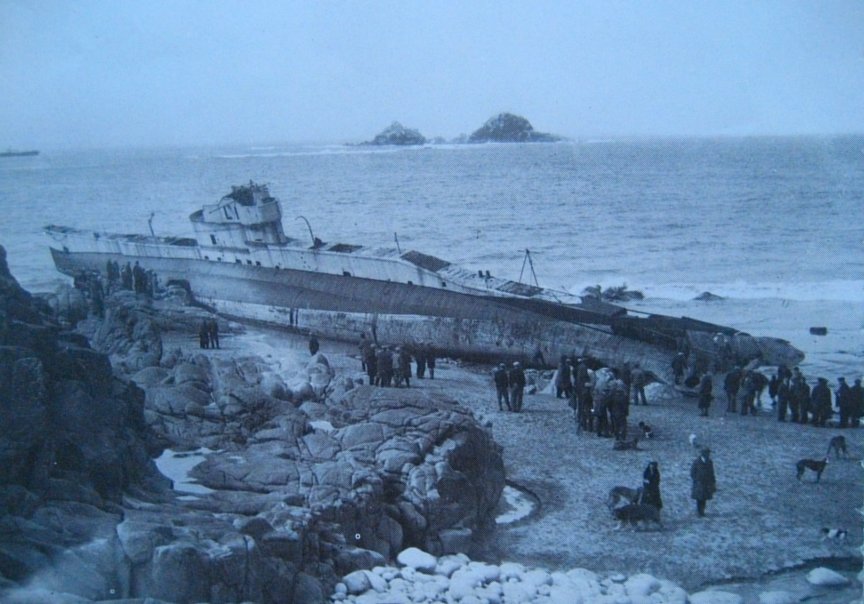 Now I would have thought that any evidence of her would have disappeared after all these years, but not so. There is still quite a big piece of metal left half buried in the sand, so much in fact that the National Trust, who owns the Cove, have marked it with a buoy and put some warning notices up. You can’t really see anything until a spring low tide, and I arrived at the wrong time, because the tide was still going out. So is it worth the bother? Well yes it really is, and not just for the wreck. 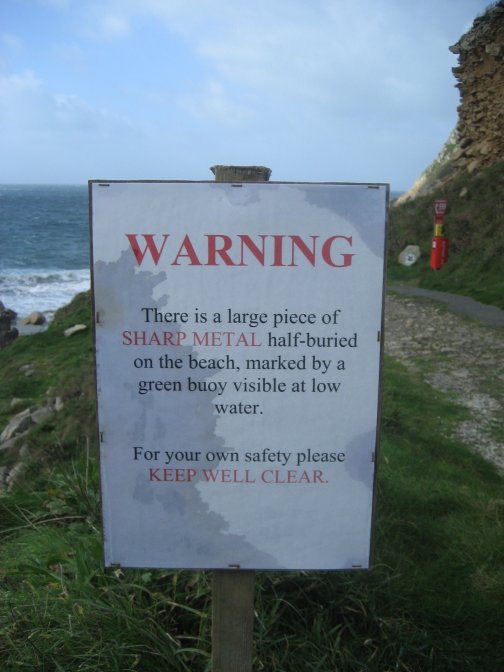 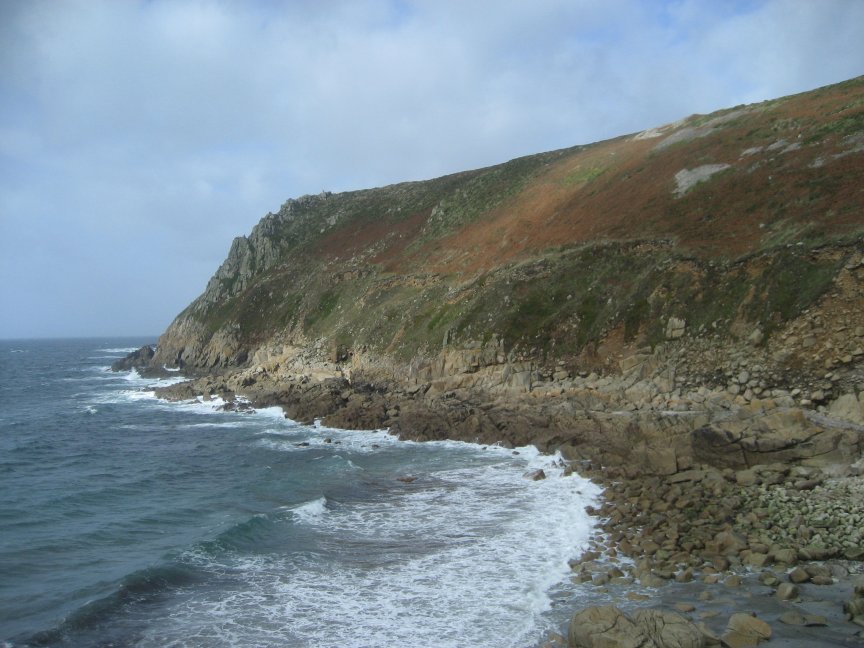 Penawell Cove is a wild and beautiful place, only a mile or so from the dramatic Cape Cornwall, right in the middle of an old Cornish mining area. To find the Cove head straight to Porth Nanven, where there is a National Trust car park. (voluntary donations) the cove is the beach. All around are adits for mine shafts tunnelled right into the cliffs. Whilst the views are spectacular, the whole cove is something of a history lesson as its eroded banks show the tale of the global warming that happened after the last ice age. 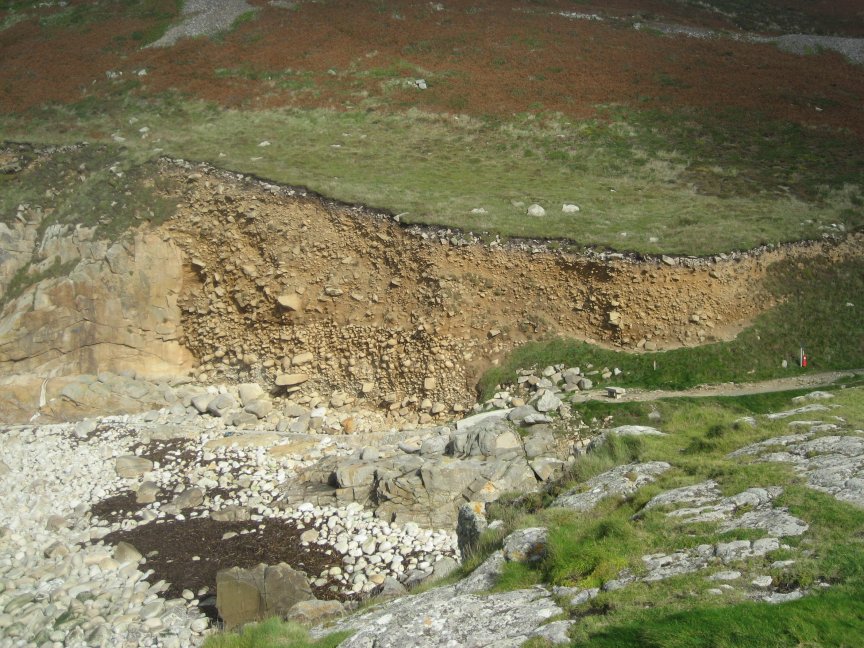 Modern erosion has cut through the cliffs to form their present shape, but they also show you the granite cliffs, and the raised boulder beach of the warm climate 120,000 years ago. This is all overlaid by thick deposits of angular frost shattered rock, the remains of the permafrost flows of the ice age. The Trust has put up some helpful boards with all the info you need to know. 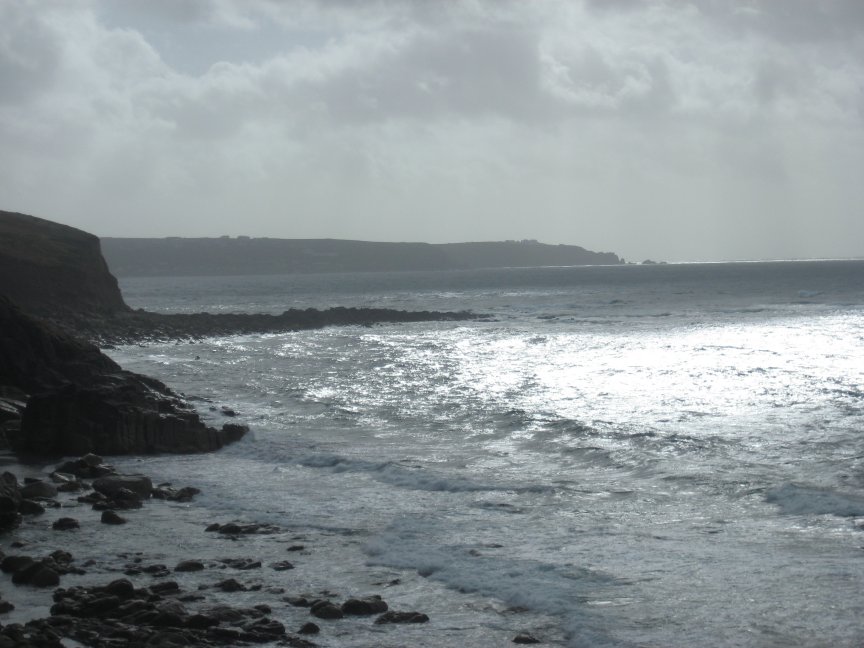 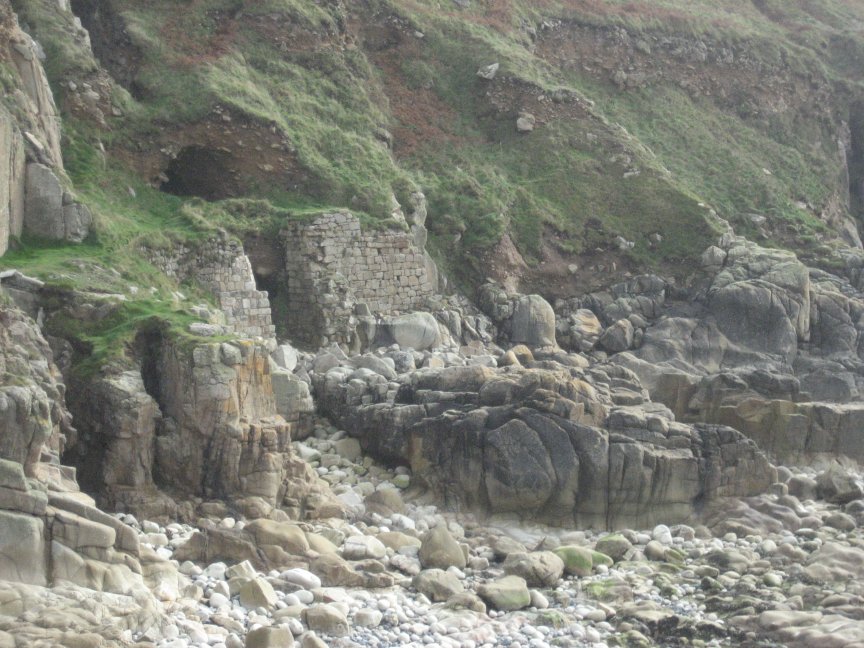 Adit cut into the cliff.

If you are feeling fit you can walk the mile or so over the cliffs to Cape Cornwall, or, (like me) drive the car down narrow winding lanes into a Cornwall that doesn’t seem to have changed much since the 1950’s. The scenery is stunning. In the distance you can see the ruined towers of the mine shafts, and in the foreground there is an ancient church surrounded by hugely horned cattle, and all around, the crash of waves on the rocks, and the cry of the seabirds. It’s marvellous. 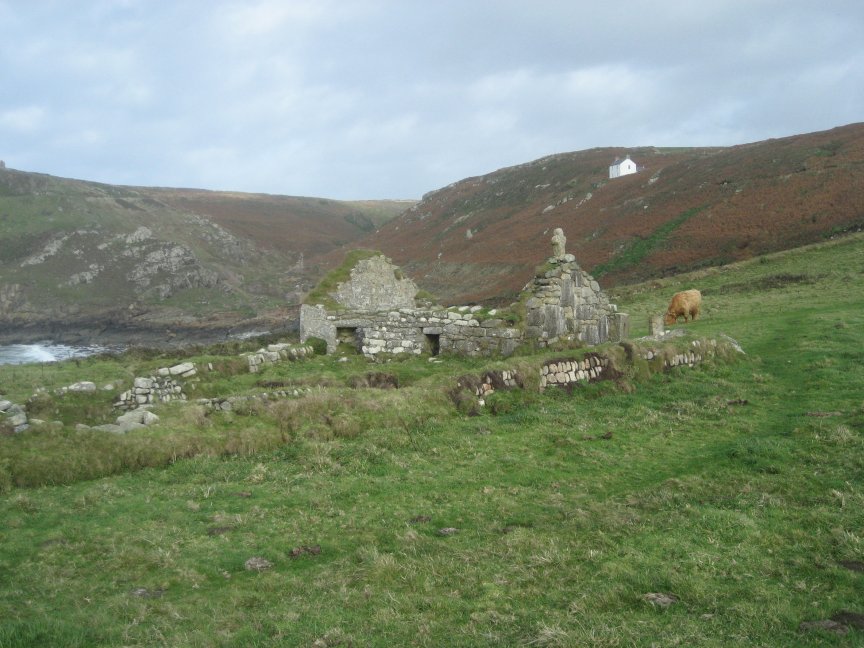 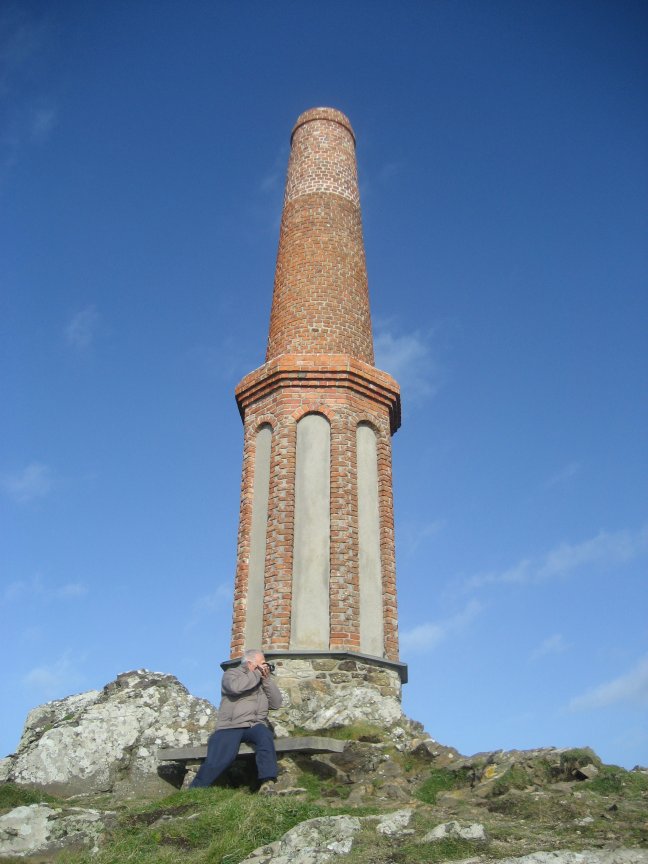 Because I had got the tide wrong, I had a couple of hours to kill, so I drove back the nearest town, St. Just. It’s typically Cornish. Granite buildings grouped around a central square, a pasty shop, a couple of pubs, and now because of the tourists, a couple of gallery’s, an organic cafe and deli. It doesn’t sound much, but it’s charming and friendly, and for the Naval Enthusiast it harbours a big surprise. 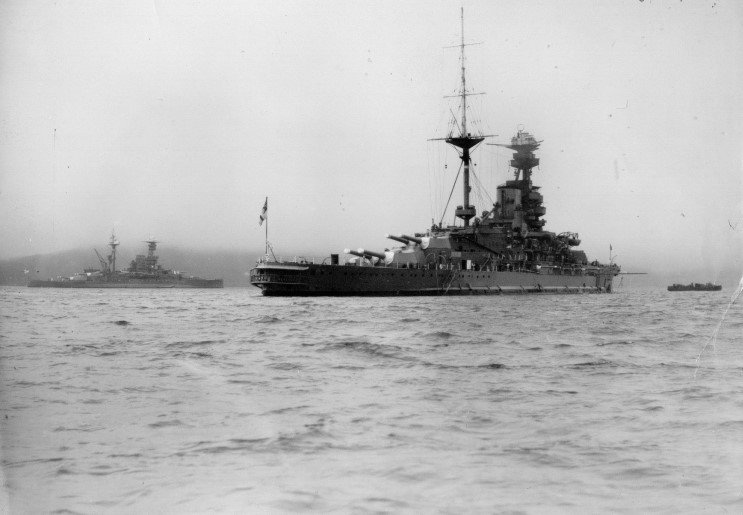 The church of St. Just in Penwith lies just of the main square. There has been a church on this site since around 428 AD, and over the years bits have been rebuilt and changed especially in the 14th century. I always like looking around church yards because you so often find quite a lot of information about shipwrecks. I was unlucky outside, but inside was a revelation. Draped across the north corner of the church, near the bell tower, is the Battle Ensign of H.M.S.Revenge. 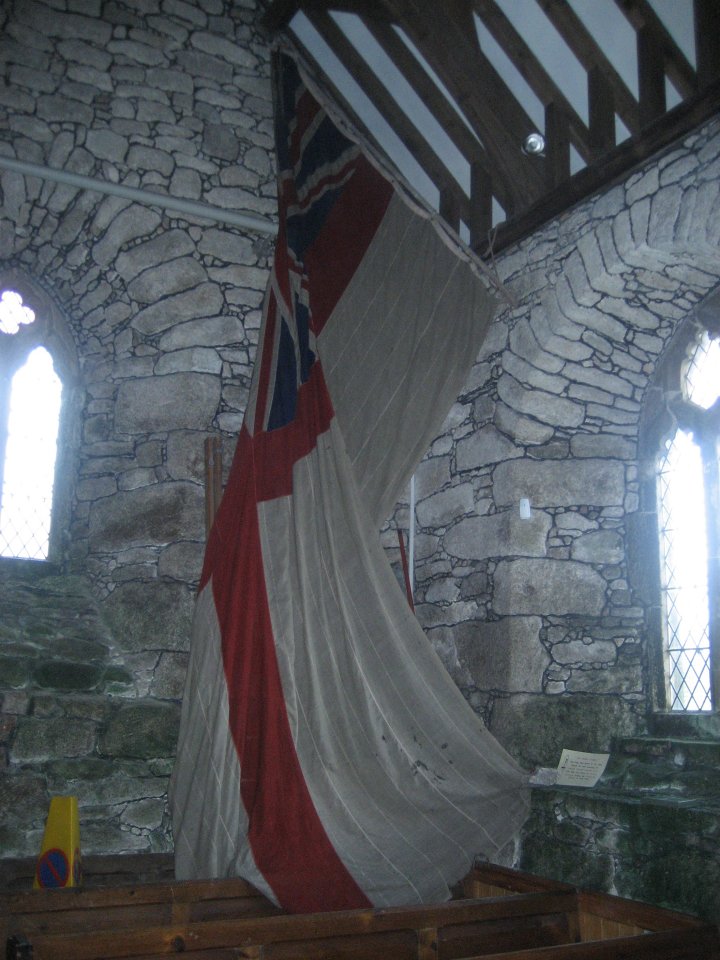 This flag was presented to the church by Captain Russell Grenfell. His family originated from the area, and as a junior officer he served on the battleship when it was part of the First Squadron of the Grand Fleet, and saw action at the Battle of Jutland. It was to the Revenge, that Vice- Admiral Burney transferred his Flag when his ship H.M.S. Malborough was torpedoed. The Revenge had been launched in May 1915 and served through-out both Wars and was finally scrapped at Inverkeithing in Sept 1948. 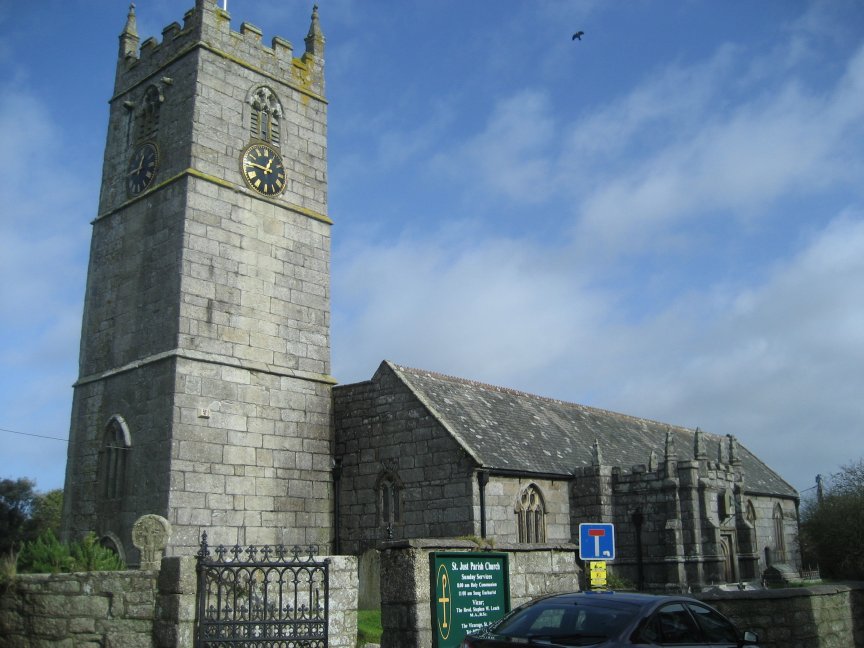 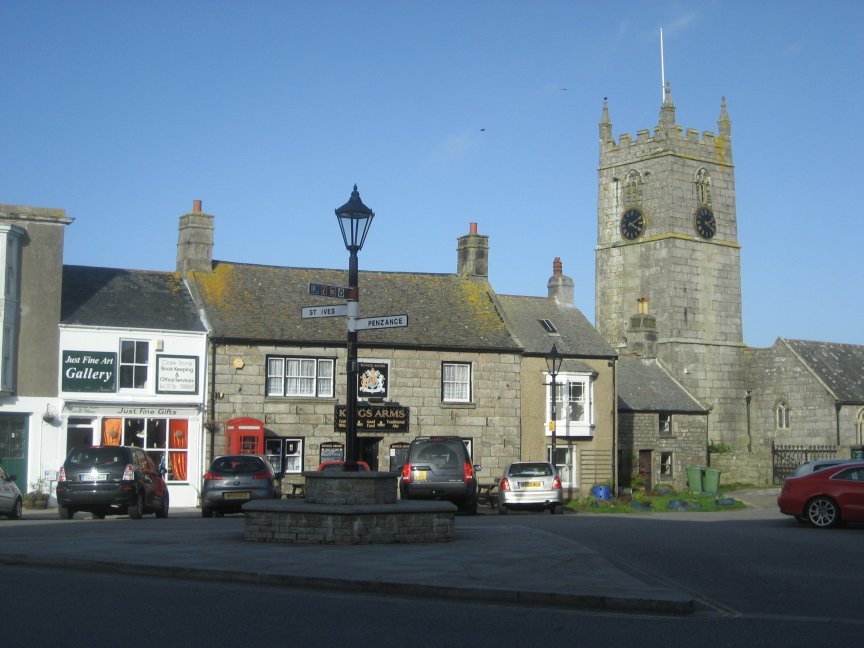 To find St.Just, make your way down the A30 to Penzance, then take the A3071 all the way to St.Just. Once there,take the Bosorn Road down to Porth Naven. 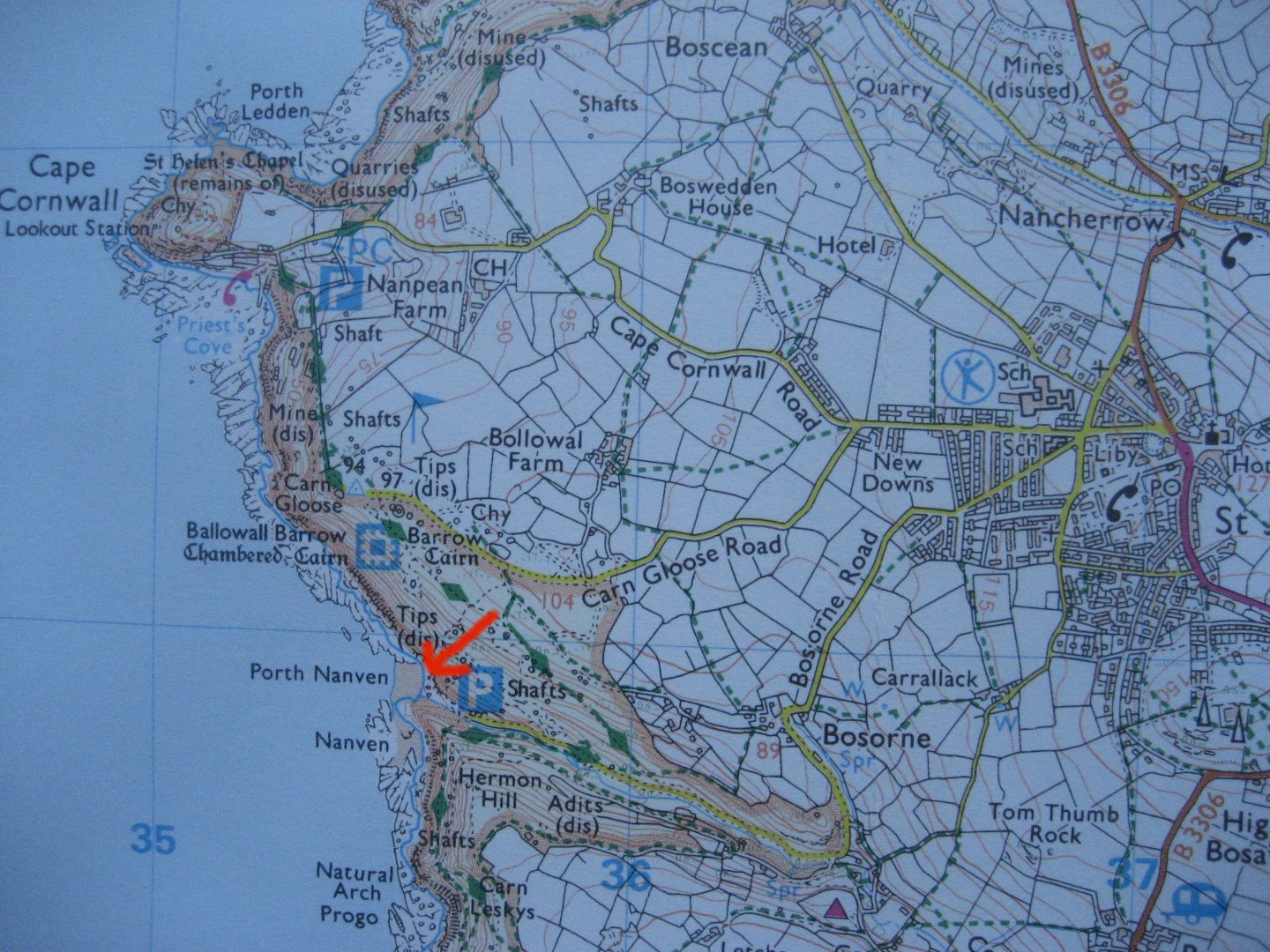