One of the most controversial persons of all time was the man they call Jesus of Nazareth, better known to his millions of followers around the world as Jesus Christ. For over two thousand years the religion that he founded has given hope and peace to many, but has also been the cause of countless wars with men, often on opposing sides, gladly laying down their lives in His name. On the plus side, churches and art of aching beauty have been created over the centuries in His honour, and His creed of peace, forgiveness, and love have become the cornerstone of most civilized nations. Believe in Him or not, what I have always found fascinating is that behind all the miracles and myths, Jesus of Nazareth was a real person. You can actually track him in the historical record. He did exist. The Romans thought He was a revolutionary, and they did put Him to death. 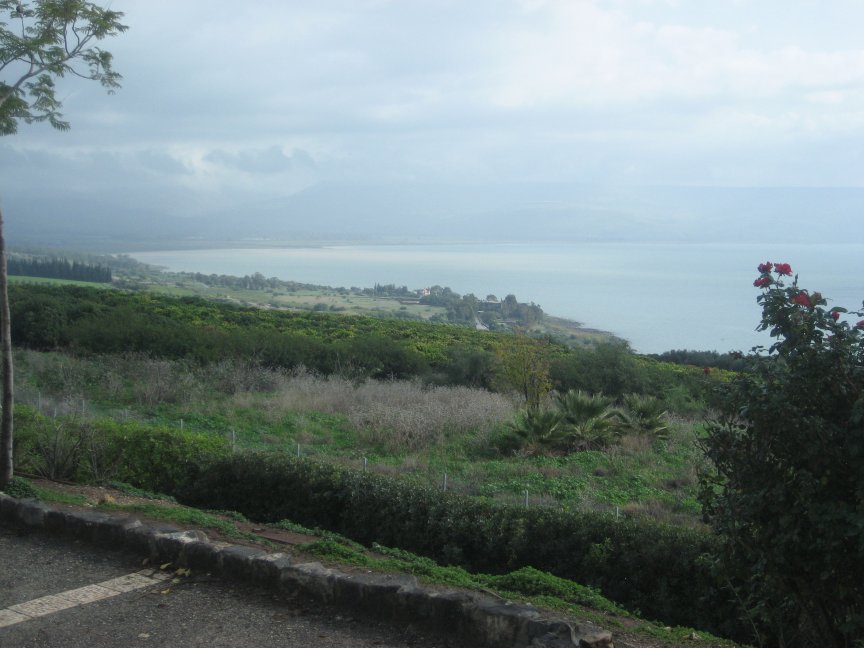 The Sea of Galilee from the Mount of Beatitudes

Some of Jesus’ most famous sermons and miracles were carried out around the Sea of Galilee, and often he would use a small fishing boat as a platform to address the multitudes on the shore and to traverse parts of the lake. None of these types of boat had ever been found until 1986, when two brothers, Moshe and Yuval Lufan from the Kibbutz Ginosar went for a stroll along the shore of the Lake. Due to an exceptional drought, areas of the Lake that were usually underwater were now exposed, and it was then that the brothers saw the unmistakeable outline of a small boat. They immediately rushed back to inform the head of the Kibbutz who after taking a detailed look decided to inform the Israel Dept of Antiquities. 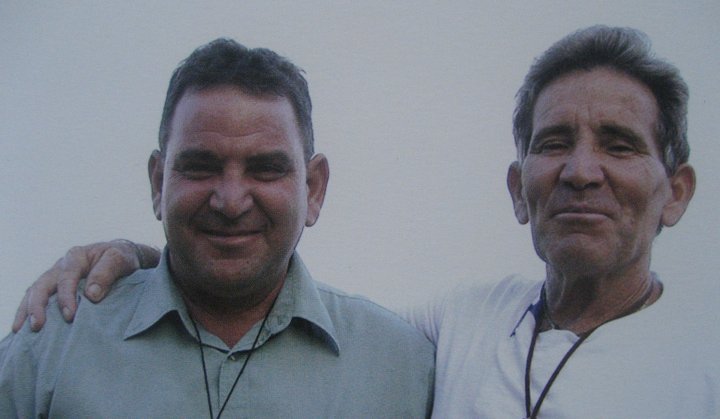 An initial examination discovered that the boat had mortise and tenon joints, a method of construction used in the Mediterranean as early as the Second Millennium BCE, to the end of the Roman period. In order to disturb the boat as little as possible, a probe excavation was carried out which revealed that because the boat had been submerged in mud for so long, its wood was preserved in pretty good condition. Another exciting discovery were two cooking pots near the prow that could be tentatively dated to the mid first century CE. However it was impossible to say if they were off the boat or had just washed up nearby and therefore had no connection. 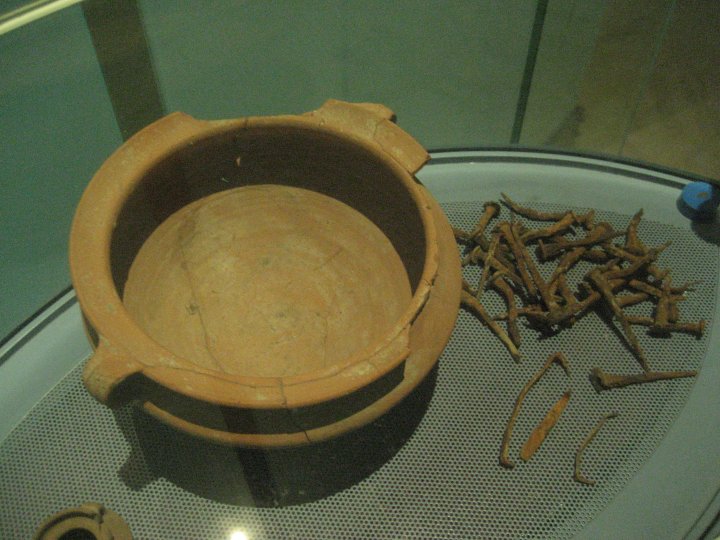 Cooking pot and nails found near the boat.

The boat seemed to be 8.2 metres long and 2.3 metres wide, and although preserved in good condition, the wood was completely waterlogged and spongy and could not possibly support its own weight if the Dept wanted to lift it. Lifting the boat was becoming a priority as the drought had lifted and the water level was now starting to rise threatening to renumbered the boat. The answer was to build a dyke around the boat to keep the water out, excavate around the clock, and come up with a way of lifting the boat without destroying it. As the boat emerged from the mud it had to be sprayed continuously with water and protected from direct sun in order to stop the wood from drying right out and crumbling. The aim was to excavate and lift the boat as quickly as possible and then plunge it straight back into water under controlled conditions. 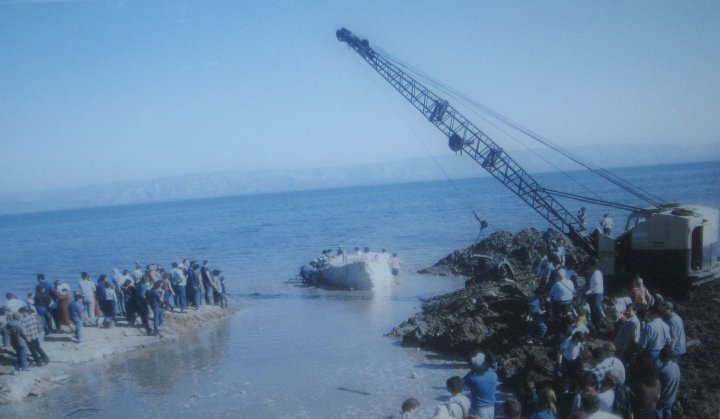 Getting ready to lift the boat.

The trouble was nobody had figured out how to lift the boat. One way was just to completely dismantle the boat and then rebuild it. Nobody liked that idea, so in the end a rather ad hoc scheme of off fibre glass ribs inserted between the original frames was adopted, and then the boat was filled with polyurethane foam. Tunnels were dug underneath the boat and more fibre glass ribs were inserted which were joined to the other ribs and a cage of the same material was constructed along the upper edge of off the boat. The tunnels were then filled with more foam, which when it hardened, served as the external supports for the boat. The remaining mud was dug out and then the whole craft was sprayed again with polyurethane foam. It had all taken eleven days. 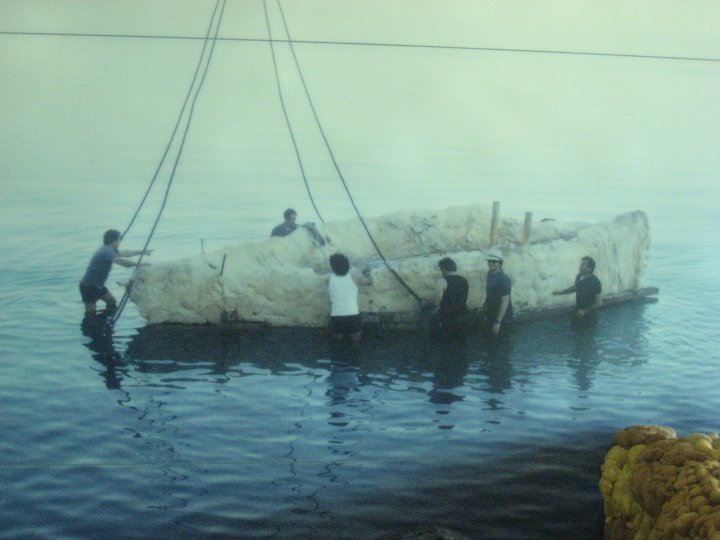 Just a blob of foam.

The dyke was broken and the boat took its first journey for two thousand years, floating on the sea of Galilee and being towed the three hundred metres to the Kibbutz Ginosar ready for its conservation. Although it had taken only eleven days to excavate the vessel, it was to be fourteen long years of treatment before the boat was ready to be displayed. The initial study of the Galilee boat reinforced the first assessment that they had got something special, and whilst elements of its construction were the same as other Mediterranean boats of the classical period, some were unique to boats from this inland lake. Most of the planks that make up the boat were of cedar and about 3cm thick. The keel and planking had been edge joined in the classical manner using mortise and tenon joints, locked in place with tapered hardwood pegs. The transverse support frames were made from naturally curved oak branches (much like our wooden warships, albeit on a smaller scale) and the planking was fastened to them with iron nails. 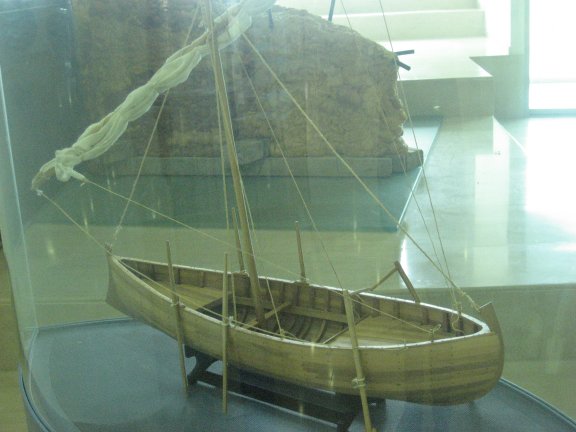 This is what the complete boat would have looked like.

The boats design, a deep rounded stern and a fine bow seem different to anything else recorded archeologically, although there are plenty of artistic representations of boats that look exactly like this one. While all of this was fascinating, what really sparked the most interest was the fact that whilst this boat had been initially made by skilled shipwrights, over its long life maybe as long as two or three generations, it had been repaired many times with all sorts of wood (twelve different types) with different degrees of skill, and often the planks had been refastened with just ordinary domestic nails. In the end the boat became worthless and was abandoned where it was discovered, after its stem, stern and most of any superstructure had been removed for use elsewhere. 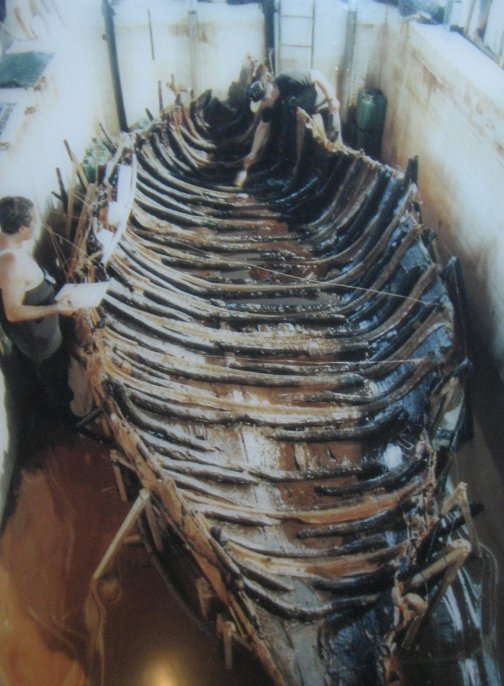 Drying out the boat.

The conservation process which was to take fourteen years, was complicated by the different types of wood and their water content. It was decided to use polyethylene glycol, a sort of synthetic wax which is available in a variety of molecule sizes. A two stage process using relatively small molecules,PEG6000, which would penetrate the wood cells and largely replace the water bonds with the cell walls would be started first, and when this stage was thought to be complete, the use of larger molecules, PEG0400, would then penetrate the wood cells, coating its surfaces and even filling them. 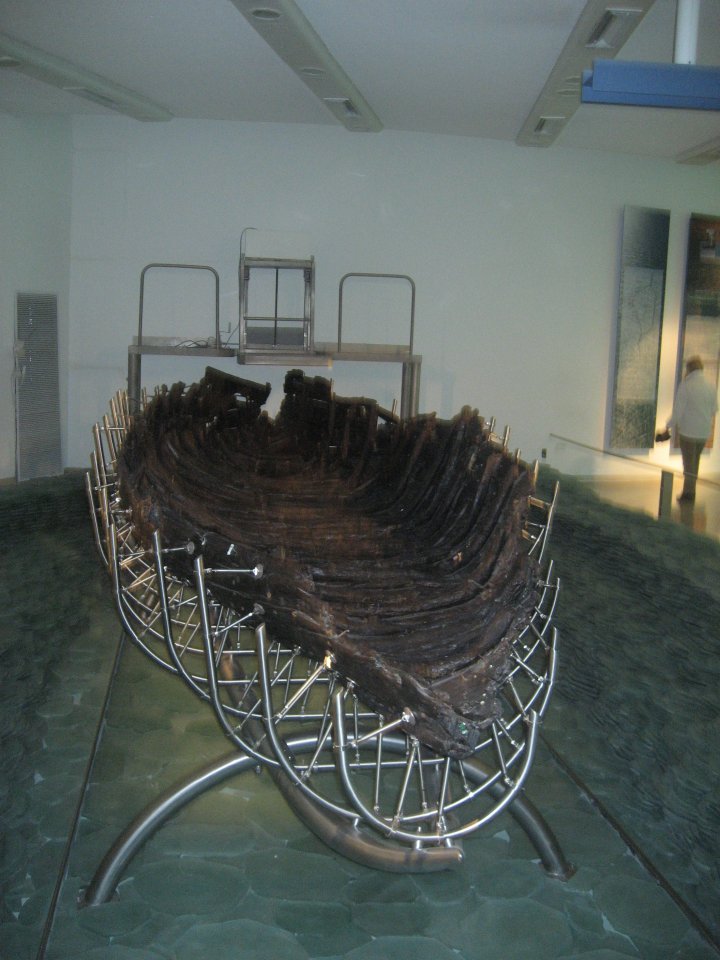 Front view of the boat in its cradle.

In order to do all this the boat was placed in a tiled reinforced concrete pool, the protective coat of polyurethane was carefully stripped away and the pool was filled with water at a temperature of 60f. The PEG was gradually (it required nearly forty tons of the stuff) introduced and the hole thing left to soak. Because of the iron nails and other bits and pieces an inhibitor had to be used to stop the P.E.G corroding them, and during the second stage an anti- oxidant was used to protect the molecular chains. Unfortunately this prompted a Bacterial attack which clouded the water and started to ferment it. The stink was appalling but after extensive research a pesticide was found that did the job and sterilized the pool. After years of soaking with the pool so dark that you couldn’t see the boat, the moment of truth finally arrived. The pool was drained and there at the bottom was the still intact boat. 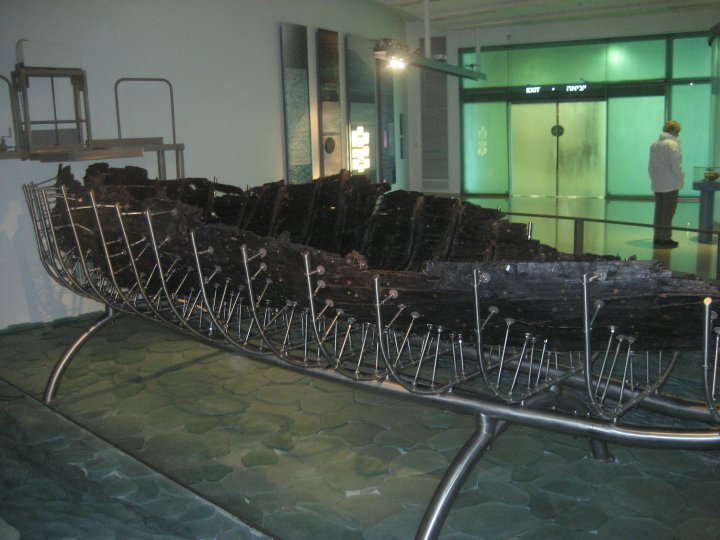 Side view of the boat.

It took a full year for the boat to completely dry out and the fact that it did with no cracks or distortion is a tribute to the skill and care of all concerned. In order to display the boat, the fibreglass ribs which were holding her in shape, were replaced with a stainless steel cradle which is not in the least intrusive. The boat is now the centre piece of the Man in Galilee exibition at the Yigal Allon Center where a new wing has been specially built to house it. 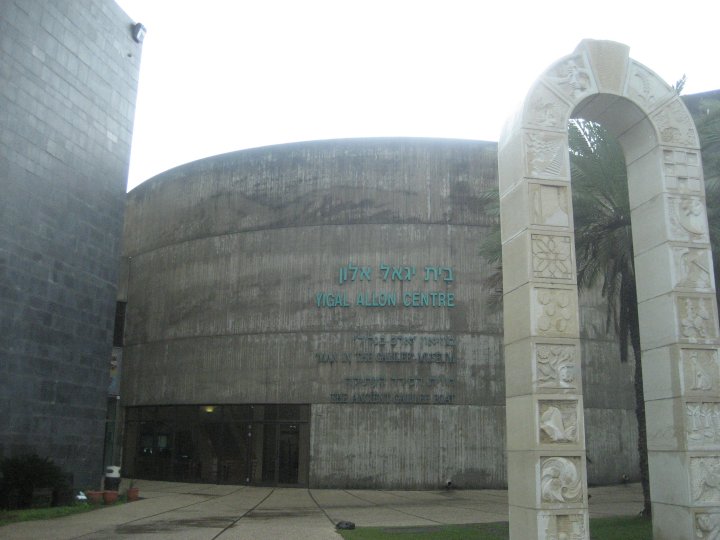 The outside of the hall is a bit brutal, but its great inside.

Although this cannot compete, with the Vasa or even the Viking Longship, this boat is worth seeing and worth preserving. Wheather you are a religious person or not, the fact that this boat was around when Christ walked the earth makes it special. Nobody who goes to the Sea of Galilee can fail to be moved by its beauty and its historical associations, and this boat gives you a tangible link with those far, far of days.