I lived in Brighton until I was about 24, and in all those years we never had a shipwreck, in spite of seeing loads of ships sailing back and forth on the horizon. There once was a dead whale washed up near the West Pier (now burned down) which drove the café owners wild with anger at the stink of its rotting carcase, and there was a horrible large sort of squid which washed ashore one evening and washed away by the next dawn, but never a shipwreck. All that changed on 21st January 1980 when the cargo ship Athena B ended up hard aground on the beach near the Aquarium to the east of the Palace Pier, now called the Brighton Pier. 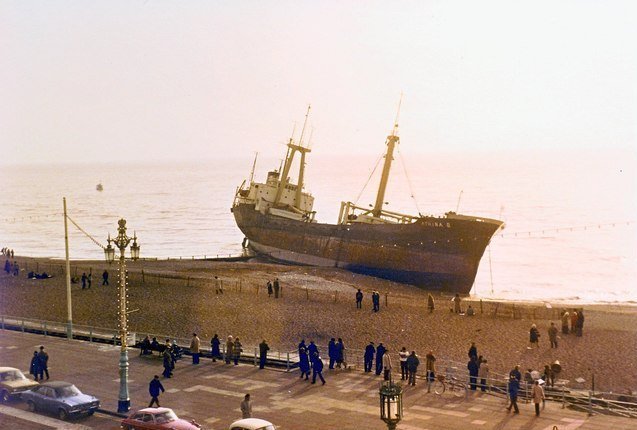 Originally built as the Kojima Maru at Hiroshima in 1968, she was renamed several times until ending up in Greek ownership and being renamed the Athena B. On her last trip she left the Azores on December 11th 1979 loaded with 3000 tonnes of pumice stone bound for Shoreham by Sea. During the voyage she had problems with her radar compass and generator and put in to La Rochelle for repairs. As the Athena B left France the weather worsened and when she arrived off Shoreham on the afternoon of the 20th January the winds were gusting Force eight and she couldn’t get into the harbour which has a fairly narrow entrance. While the ship hovered outside the harbour her engines lost power and she started to drift towards Brighton. Luckily the Shoreham Lifeboat was close at hand and she managed to take off half of the crew including the Captains family. The rest of the crew had to wait till the morning of the 21st January when the lifeboat after four attempts managed to get all the crew to safety. It was a very difficult rescue and the Cox’n, Ken Voice was the awarded the RNLI’s Silver Medal. 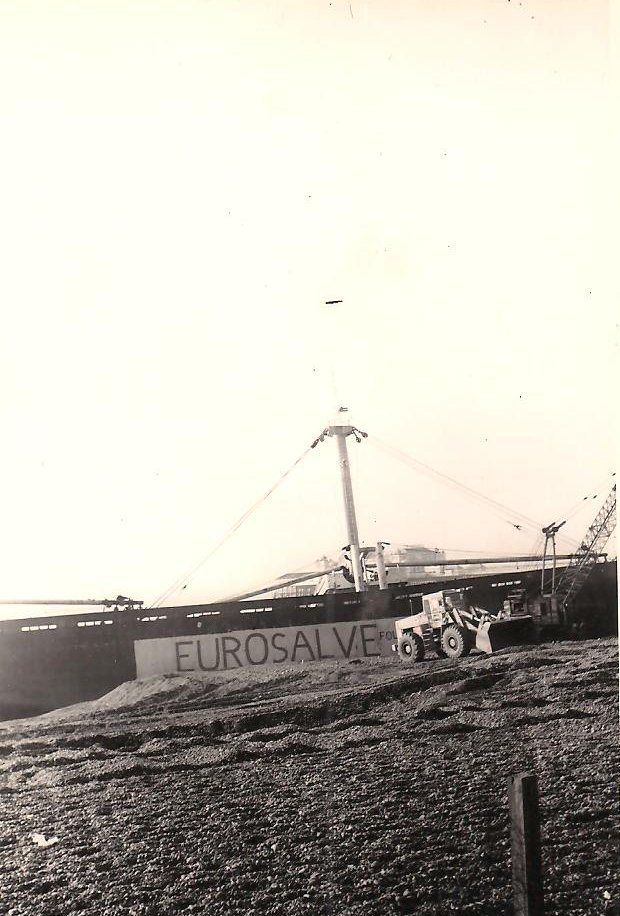 Athina B being unloaded. 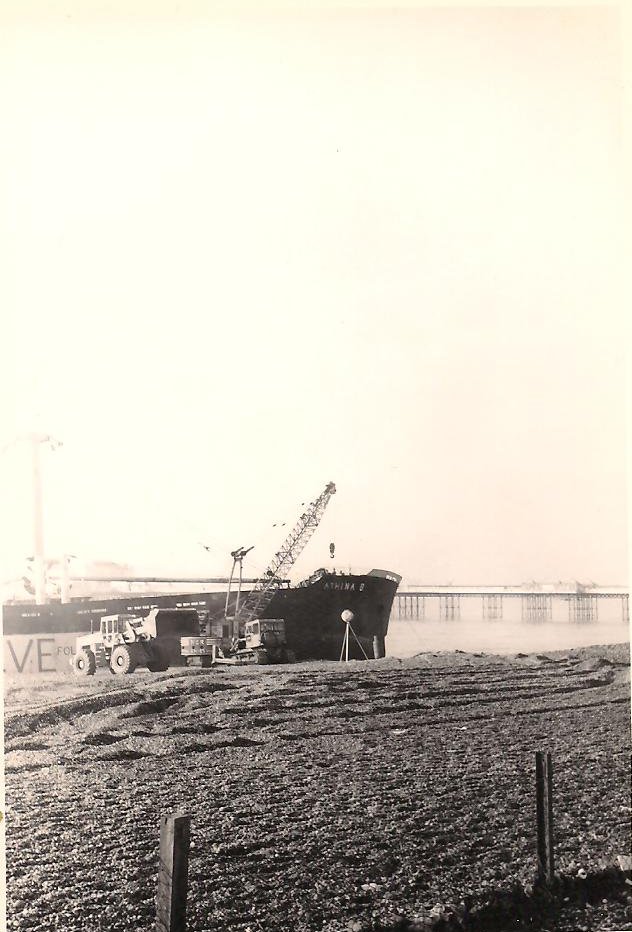 Athina B being unloaded.

After all the crew had been taken off the ship the Athena B continued to drift in the gale force winds and ended up beached on the shore, where she broke her back, and was declared a complete write off. Very soon the salvors, engaged a mobile crane and started to off load her cargo of pumice stone. The job took about a month and in that time the shipwreck became a very popular tourist attraction with thousands turning up to see her, so much so that she had to have a Police guard to prevent souvenir hunters stripping the wreck of anything that was not screwed down. 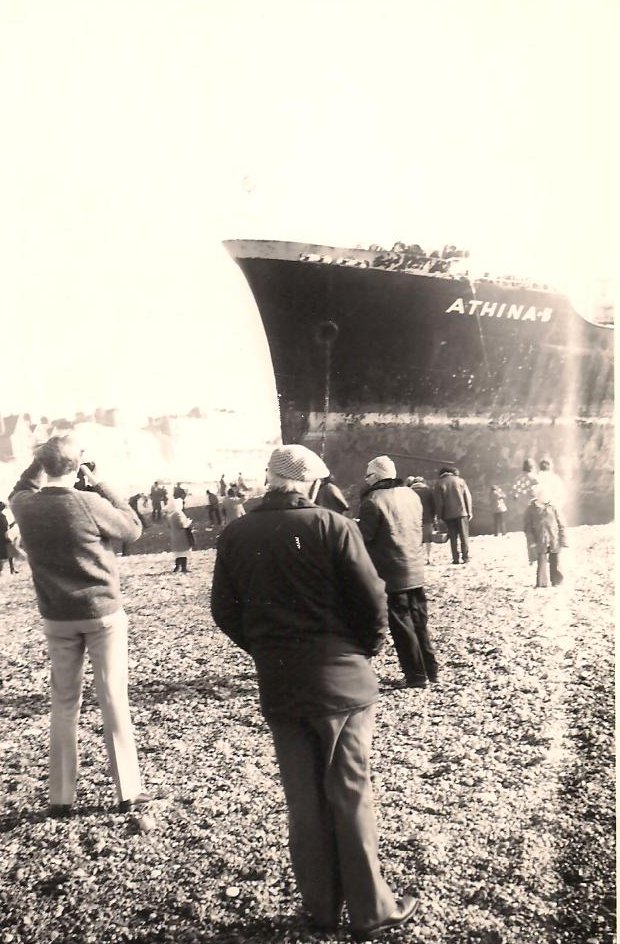 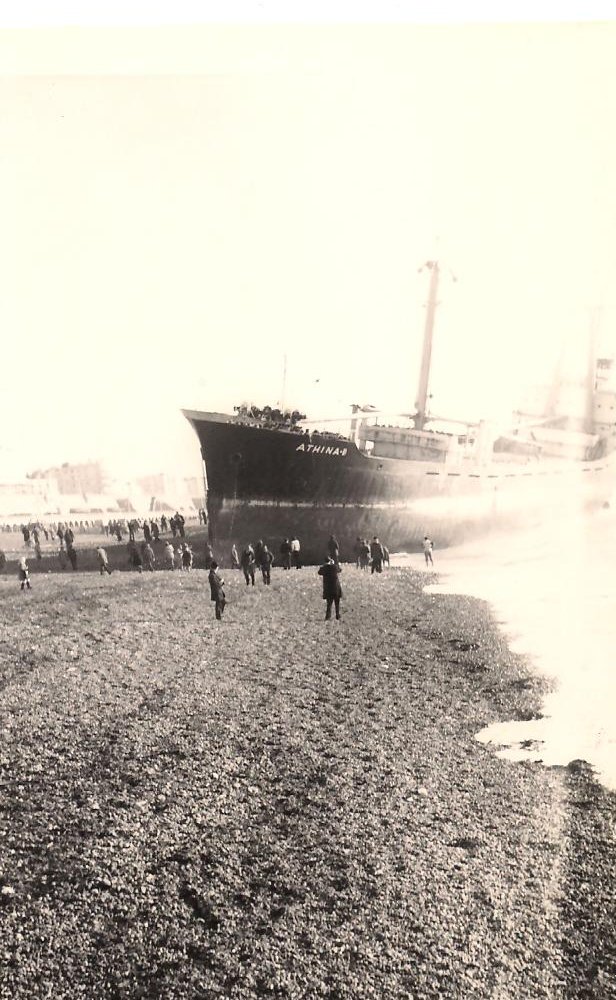 Stalls were set up along Madeira Drive as the traders cashed in on the wreck and Volk’s Railway, the oldest operating electric railway in the world opened up especially during that winters month to give the tourists something else to do. On the 21st February 1980 all the excitement came to an end as the Athina B was floated off the beach and towed to Rainham to be scrapped. All that is left of her now is one of her anchors mounted on a stone plinth by the seafront. 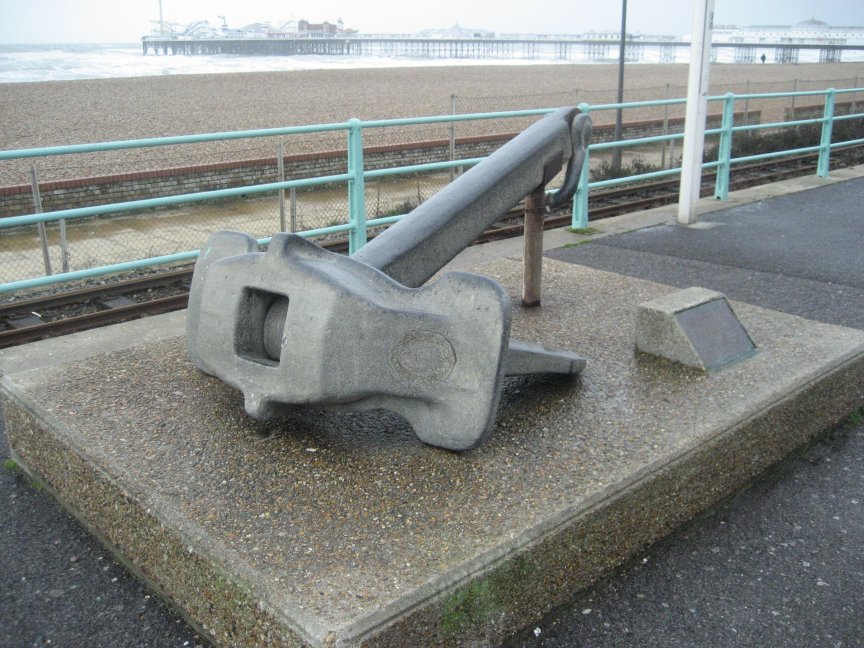 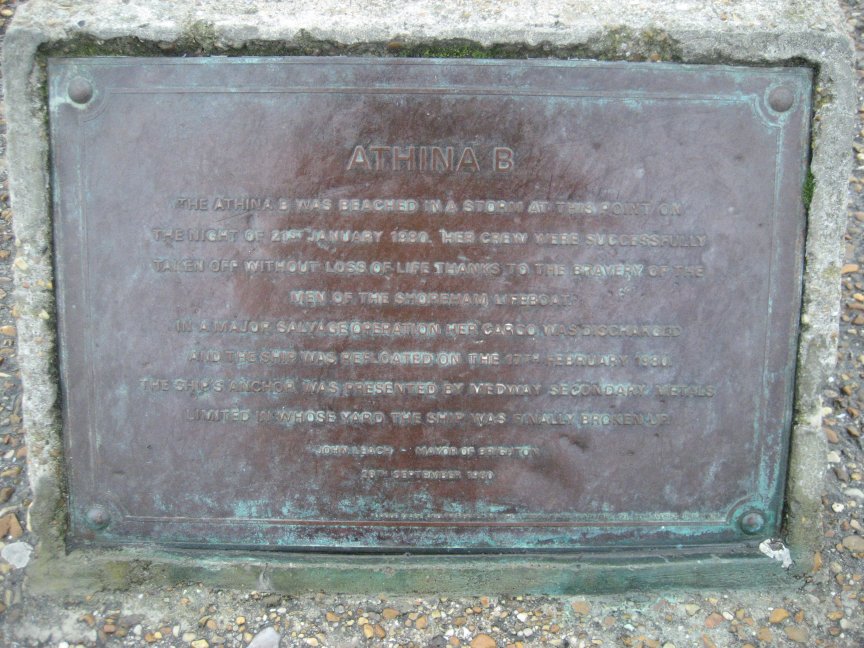 A walk along the seafront of Brighton is always a pleasure. If you start at the Ruins of the old West pier and walk towards Brighton Pier there are plenty of little pubs , restaurants and coffee shops whist on the upper walk you can still see many original buildings that have not changed much since Victorian times. The Grand Hotel that was wrecked by an IRA bomb back in the 1980 has been so carefully restored that only locals can see the join. A stroll on the Pier (free) allows you to see the full impact of the seafront and nearby is the famous Aquarium. Just to the east, on the pavement alongside the seafront, you will find the Athina B’s anchor and the entrance to Volk’s Railway, which will take you east along the seafront to Black Rock near the Brighton Marina where you will find plenty of shops restaurants, pubs and of course boats.I can think of worst ways of passing a day. 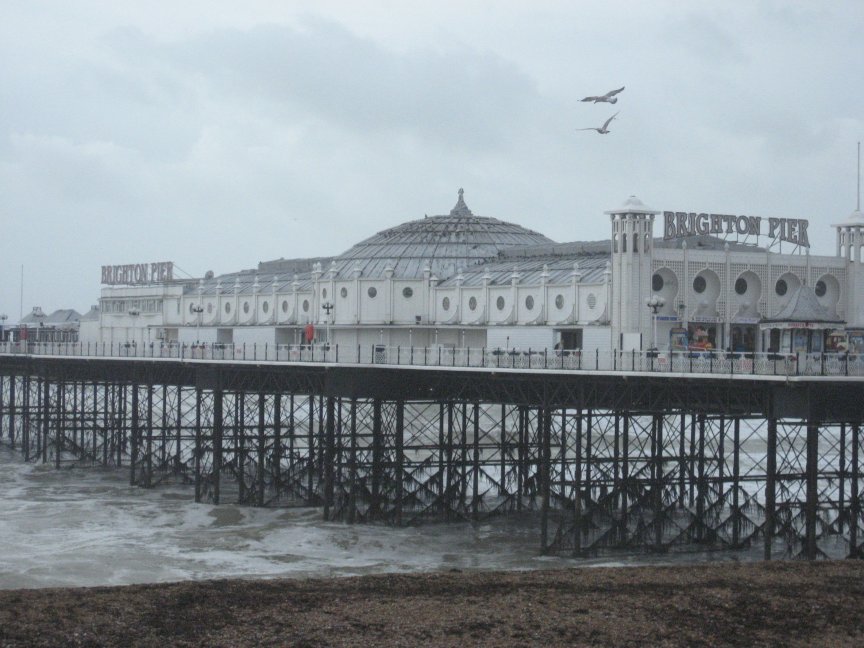 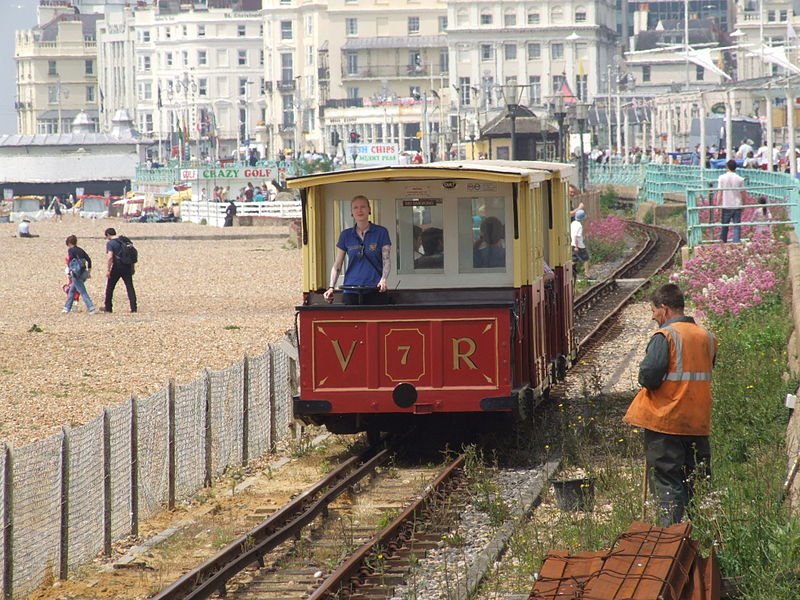 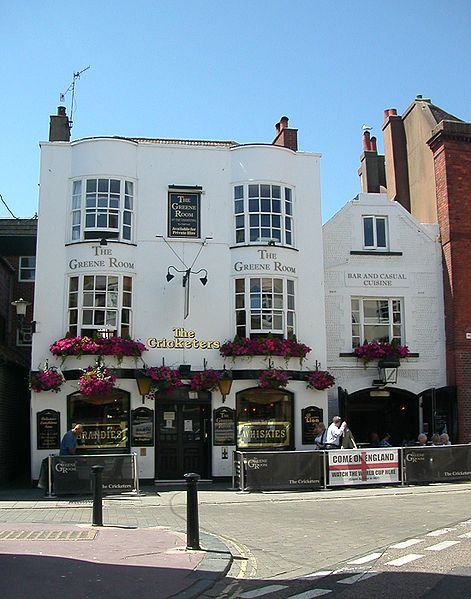 I always like to recommend a pub on these walks because usually they are out of the way places. But Brighton has literally hundreds of pubs to suit every taste. However since you will probably end up near the famous Lanes, you would be well advised to have a drink at the Cricketers Arms. It’s a real Victorian Pub immortalized by Graham Greene in his book Brighton Rock, and apart from the beer (much better) it hasn’t changed much in years. There has been a pub on the premises since 1547, and one of their most famous customers was Jack the Ripper and in The Greene Room bar, (upstairs), you can spend some time following the story of his origins and how he planned his murders from this very spot. The Cricketer’s has a unique charm of its own and is a relief from some of the more fashionable ‘chain pubs’
View Larger Map If you enlarge the map you will see the seafront with Volks railway marked.