Here is a wreck that everybody can enjoy because you do not have to dive on it. You can either look down on it from the headland, or when the tide is out you can scramble over the rocks and walk right up to it. Maenporth Beach is a great beach to visit anyway, with a pub and a snack bar right next to the beach, and easy parking. Enjoy. 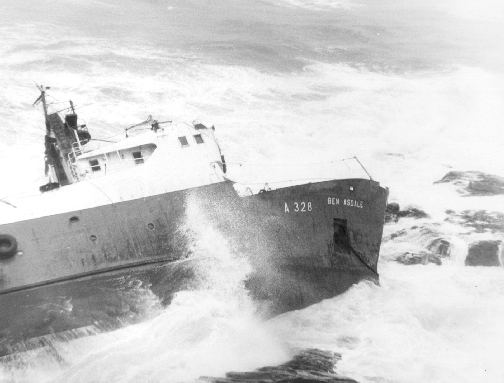 The Ben Asdale two days after she struck.

On the evening of 30th December 1979 the freezer trawler Ben Asdale was off loading fish into the hold of the Russian factory ship Antartica, which was anchored in Falmouth Bay. The weather was appalling, with a force eight gale blowing and heavy snow falling. When the Ben Asdale had finished discharging her cargo of mackerel, she cast off her stern rope in preparation to move away from the anchored Antartika. Unfortunately the rope fouled her rudder and she would not respond to her helm. The skipper, Barney Coe, tried to get the Russians to re secure the stern of his vessel but by now the fierce gale was dragging both boats. The Russians sent over two officers to assist in getting the steering working and shortly after the bow rope parted and the Ben Asdale was adrift at the mercy of the sea. 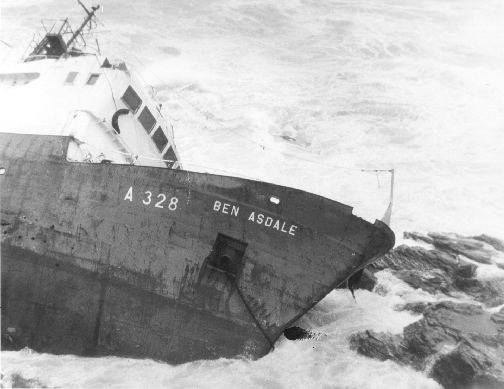 The skipper let go an anchor but it failed to hold, and as they were swept towards Manenporth beach, a Mayday was sent. With the wind now gusting force ten and the waves breaking over the trawler, she was out of control, and soon piled onto the rocks at the bottom of Newporth Head. As the boat struck the rocks one of the crew jumped over the side gravely injuring himself, and others threw out anything to act as life rafts.

By now word of the trawlers troubles had spread and the three Billcliffe brothers who had a hotel by the beach rushed to the scene and with no regard for their own safety waded straight into the raging surf and during that night dragged three of the crew to safety. Up on Newporth head, the Coastguard had arrived and was setting up a breaches buoy. The blizzard was now so bad that nobody could see hardly anything, and searchlights were rigged. As the breaches buoy was connected to the stricken trawler she lurched and rolled onto her side jamming all the gear. Luckily the rescue helicopter had by now arrived from Coldrose but could not see what was going on down on the hulk of the trawler because of the swirling blizzard. 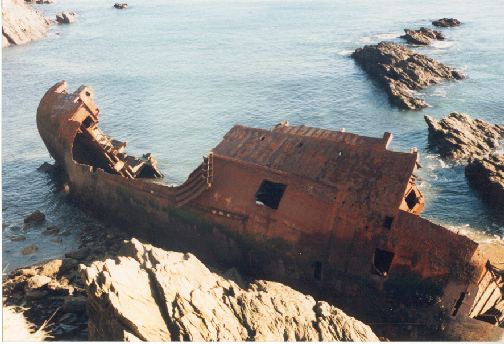 The Coastguard set up a radio link with the pilot, to guide the helicopter, which had to fly backwards over the wreck because of the winds and the nearness of the Headland. Over a period of about one and a half hours the helicopter lowered its winch eight times and successfully lifted off a crewman. Whilst all this was happening three of the crew despaired and tried to swim to a shore that looked temptingly near. In the end eleven people were saved, but sadly in spite off all the efforts of the emergency services and the courageous Billcliffe brothers, three men, two Britons and a Russian were drowned, their bodies washed up the next day on Maenporth Beach. 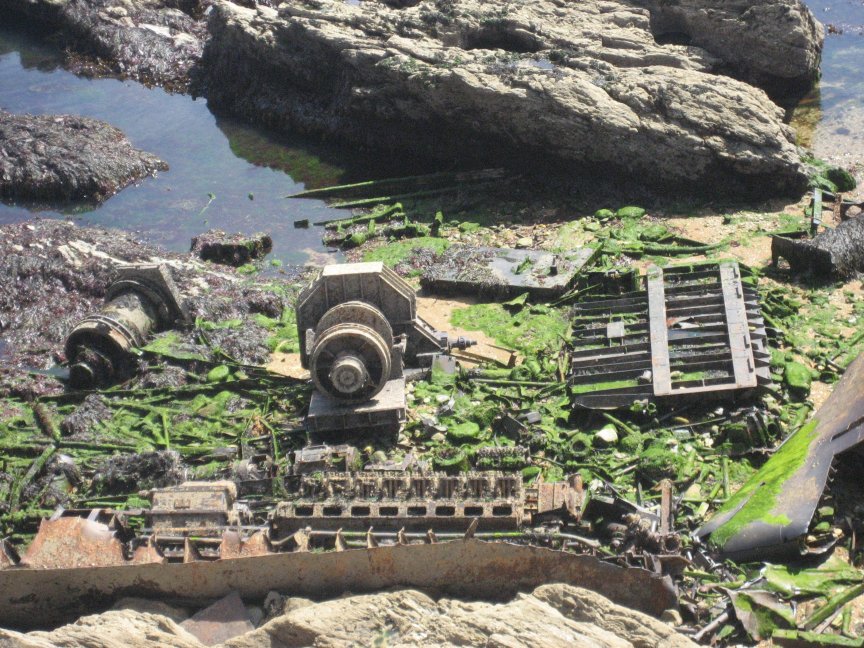