In 1940 Britain stood alone again the might of Germany who had conquered most of Europe. At sea the U boat packs waged a savage attack against Allied shipping which struggled to bring supplies to a beleaguered Island. As fast as the Allies built ships, the U boats sunk them. In 1941, 38 ships were sunk by the Wolf Packs, and one of them was the SS Gairsoppa. Along with a cargo of iron and tea the ship was also transporting 240 tonnes of silver bullion desperately needed to finance the War Effort.

In December 1940 the Gairsoppa left Calcutta in India and steamed around the African coast to Freetown in Sierra Leone to join convoy SL 64 which was heading for Liverpool docks in England. The unescorted convoy left on 31 January 1941 and at first all went well. Most of the ships were quite elderly and so kept the convoy speed down to about eight knots. However as the convoy got closer to the British Isles the weather worsened and the Gairsoppa carrying nearly 7000 tonnes including the silver found it hard to maintain even this slow speed without burning more and more fuel oil. Captain Gerald Hyland became very worried about the situation so much so that he doubted that he would be able to reach Liverpool at all. As his fuel slowly started to dwindle he sent a signal to the convoy leader and requested permission to leave the convoy and proceed as best he could to the nearest port, which was Galway on the west coast of Ireland. On February 14 1941 the Gairsoppa broke away from the convoy and turned slowly towards Ireland. Two days later she was picked up by a Focker Wulf Condor a long range spotting plane. The aircraft lazily circled the ship all the while sending out her position to the nearest Wolf packs. One of the closest U Boats was U Boat 101 commanded by Ernst Mengerson and he could not believe his luck. Here was a heavily loaded cargo ship miles from anywhere with no escorts just waiting to be sunk. Ernst sped to the area, ordered his crew to start the attack and fired his torpedo at the vulnerable ship blowing apart the ships No 2 hold and snapping off the Gairsoppa’s foremast which carried the radio ariel. As fire and smoke raged through the ship, Captain Hyland, unable to send a distress gave the order to abandon ship. 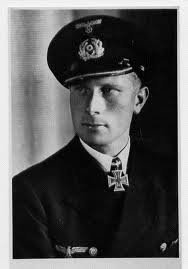 As the men started to lower the three lifeboats the U Boat surfaced and sprayed the upper deck with machine gun fire. One of the lifeboats falls were severed in the hail of bullets and crashed down into the sea. Dozens of men leapt overboard to escape the murderous fire, including Second Officer Richard Ayres. As soon as Ayres and some of the men got into the boat they began to frantically row away from the sinking ship fearful of being pulled down with it. Somehow they managed to get clear and watched with horror as the Gairsoppa sunk beneath the waves barely twenty minutes after it had been torpedoed. There had been85 people on the Gairsoppa, but when Richard Ayres looked around the stormy sea, none of the other lifeboats were to be seen. On his boat were 31 men, eight white but most were Indian seamen known as Lascars. Nobody else knew how to sail a small boat, so Ayres immediately got to work organizing things. After fitting an oar to take the place of the damaged rudder he set course to the east and hopefully land. The next thing he did was give the Indian seamen any spare blankets as they were suffering dreadfully from cold and shock and rigged up a small canvas shelter. 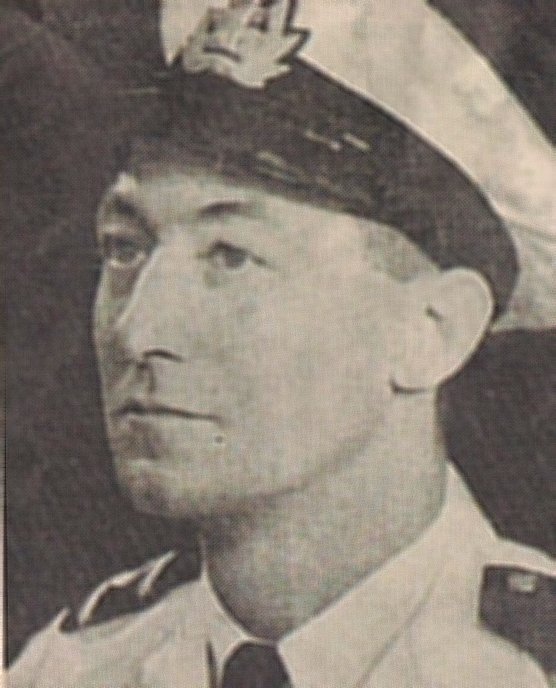 For food they had some tins of condensed milk and some dry biscuit that they had great difficulty swallowing as they had very little water. Each man was limited to half a pint of water a day and so some of the Lascars started drinking the seawater in an effort to swallow the biscuit and relieve their thirst. Unfortunately if you drink seawater there is too much salt in it and your kidneys cannot produce urine, so you become even more dehydrated and eventually die. On the eighth day the water completely ran out and as Ayres could not stop the Lascars drinking the seawater, they started to die from dehydration and also frostbite. 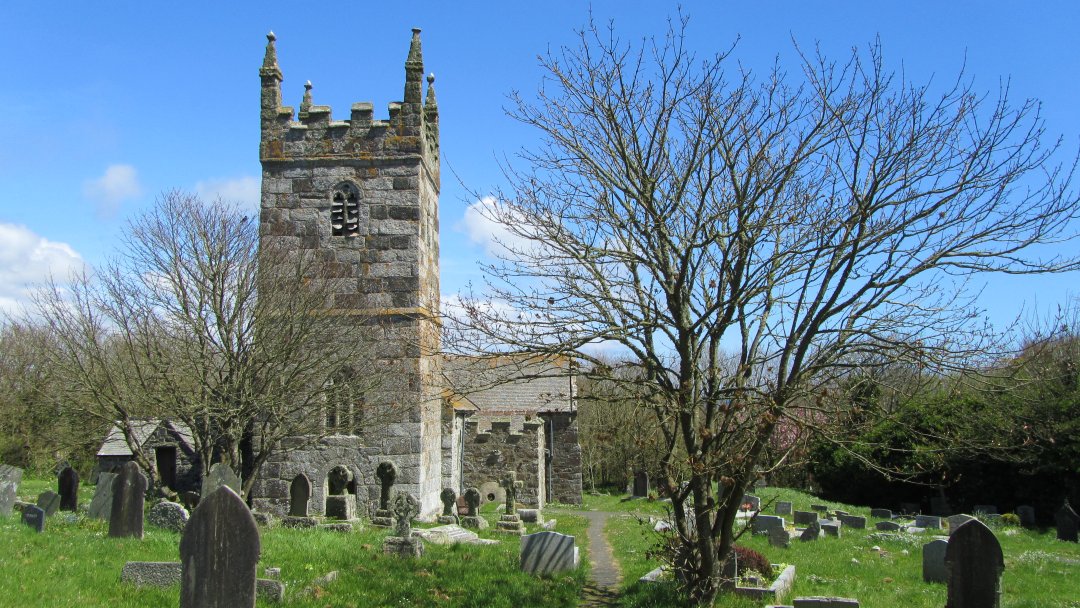 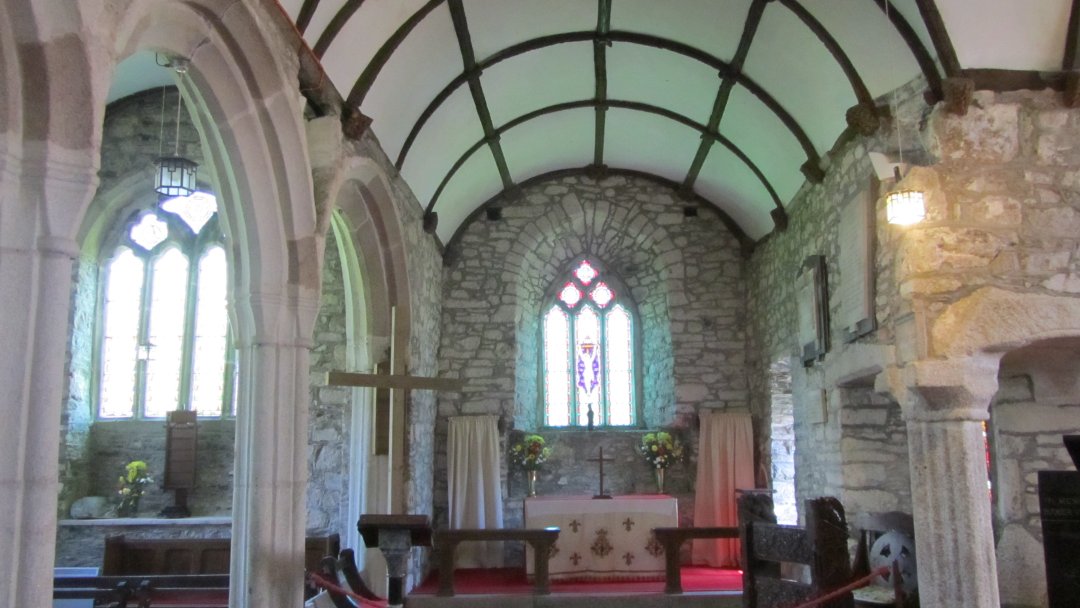 After thirteen awful days at sea one of the men croaked the word they had all despaired of ever hearing. Land! As the boat topped a wave, there was a dark outline on the horizon and a faint blink of light. As the boat edged nearer they could see clearly the outline of the Lizard Lighthouse. They had sailed over 300 miles from where the Gairsoppa had sunk. Richard Ayres sailed the boat towards a small rocky cove and as he got to the entrance a huge wave swept in and overturned the little boat tipping all of them into the water drowning all but three of the crew. The next wave partially righted the boat and Ayres managed to scramble on board helping Thomas and Hampshire onto the upturn keel only to have another breaker capsize the boat again. Hampshire was washed away to his death but Ayres and Thomas were thrown up onto the rocks. As they scrambled up the rocky beach to safety another larger wave thundered in and knocked Thomas over and he drowned yards from safety. Overwhelmed by the catastrophe Ayres gave up all his will to live and was on the point of surrendering to his fate when he heard voices urging him not to give up. 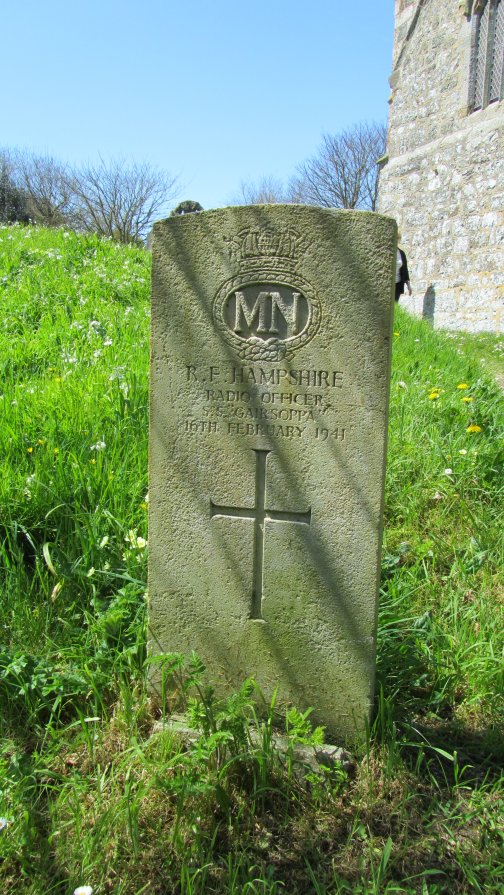 Three girls Betty Driver, Olive Martin and her sister who were evacuees from Tottenham had been walking on the cliffs when they had spotted the little boat and the drama that followed. One sped away across the fields to get help and the other two raced down to the beach and shouted to the men, begging them to keep swimming. Soon the first girl arrived with a Coastguard called Brian Richards who threw Ayres a rope and pulled him to safety. Later the bodies of Thomas, Hampshire and two Lascars were recovered and buried close by in St. Wynwallows Church. Nobody ever discovered what happened to the other life rafts and the men in them. 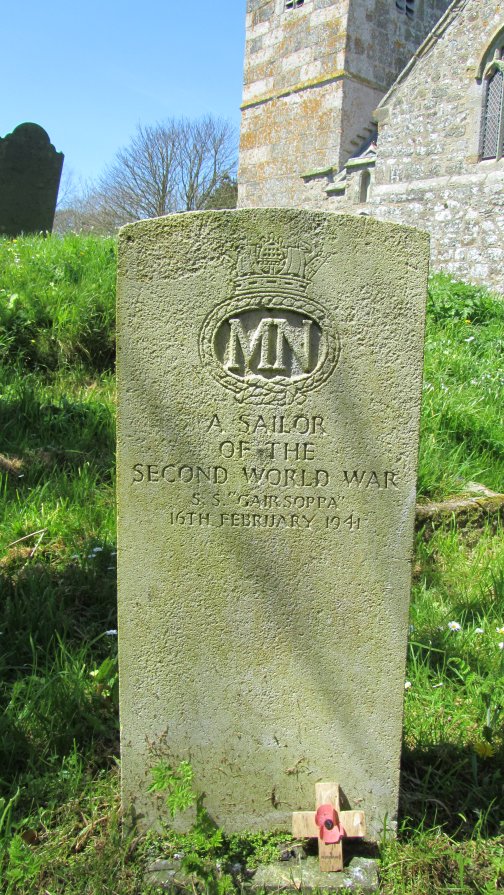 Grave of an unknown crewman.

In an almost cruel twist of chance Ayres had piloted his boat to Caerthillian Cove just a few miles from his home. All that way, to be robbed of the chance of saving all those lives, when so close to safety, it was no wonder that Richard Ayres on his return to the sea nine months later hardly ever talked about it. He had no need to reproach himself as he had done everything and more to bring his shipmates home safe. In the end the sea always has the last word. Ayres was awarded an M.B.E. in recognition of his outstanding efforts to keep his fellow survivors alive as well as Lloyds War Medal for bravery at sea. Richard Ayres served out his war service in the Royal Naval Reserve and carried on into civilian life dying in 1992. He was a very brave man who’s life made a difference. Would that we could all say the same. 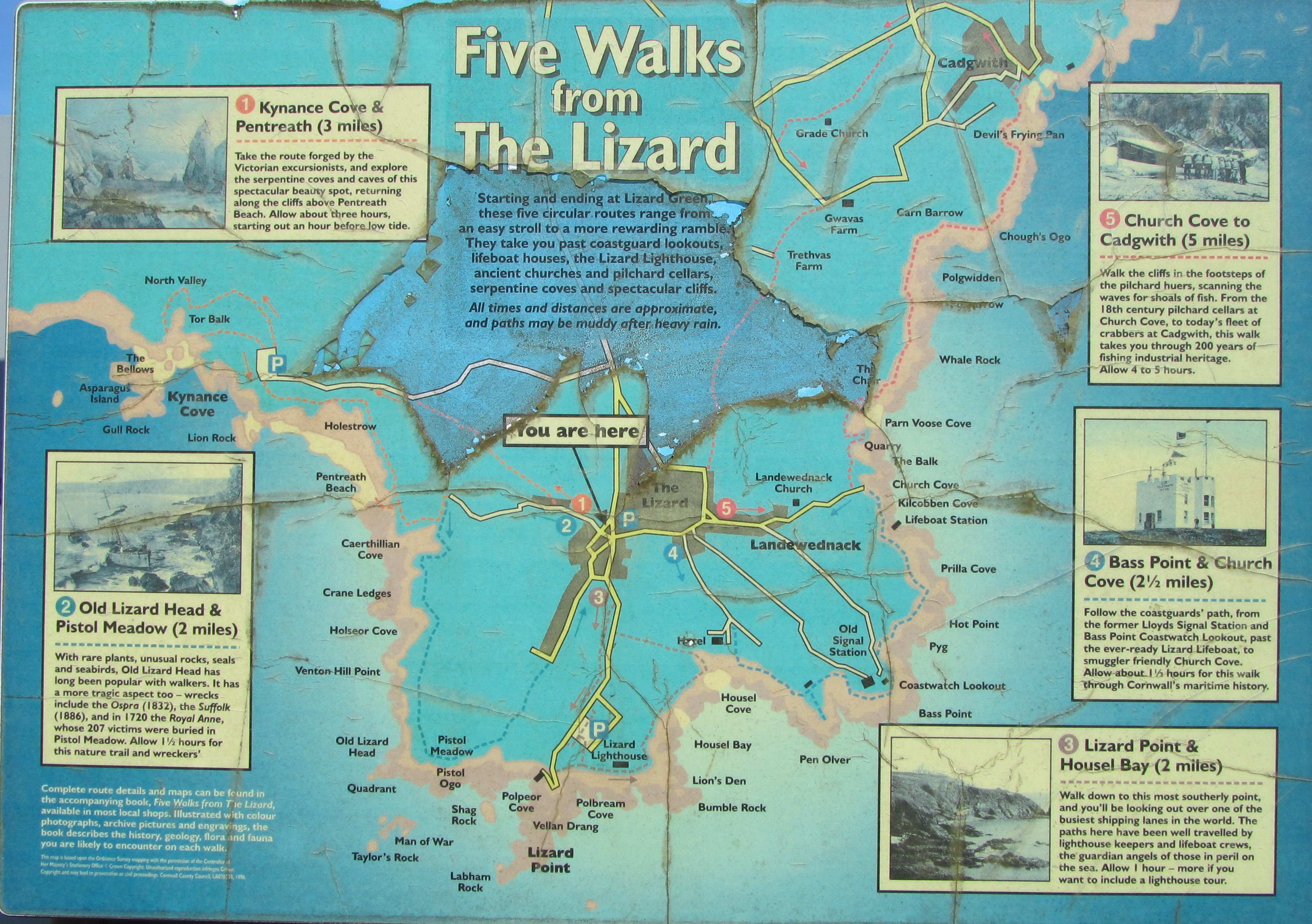 Some of the walks around the Lizard, including Church Cove.

Under a salvage agreement the British government has agreed to pay Odyssey Marine 80% of the value of cargo recovered, which could include silver bullion and silver specie. Odyssey expects to start operations at both wrecks in the second quarter of 2012. Gairsoppa lies in approximately 4,700 meters of water, about 300 miles off the coast of Ireland. The hull is upright and lying in an east-west orientation, the torpedo hole being clearly visible. it is quite easy to find the graveyard at St Wynwallow Church, Landewednwack. Drive to the Lizard and head for Church Cove, as Landewednwack does not figure on most car maps. the graves are just at the top of the stairs that are set into the wall of the car park.