Between Bolt Tail and Bolt Head lie five miles of the most treacherous coastline anywhere on the South Devon coast. Over the years shipwrecks have carpeted this part of the coastline almost end to end, and some have become so jumbled together that it is hard to tell where one starts and the other ends. The area underneath Bolberry down, near Catehole Cliff is a good example of this chaos, because at the bottom of the steep cliffs lie the remains of two ships, separated in their wrecking by nearly twenty years, but now lying almost inextricably entwined together in the shallow seas. 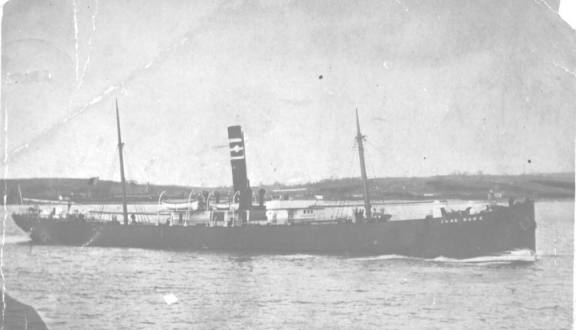 The Jane Rowe. Photo – Thanks to Chris Verstappen.

The first vessel to be wrecked here was the Jane Rowe, a former Cardiff collier now owned by a firm in Gefle, Sweden. Built by Palmers of Newcastle, she was launched in 1889 as the Mary Thomas but later changed her name to Barto when she was sold to another firm, and finally, after being sold again to the Swedish company, she was renamed the Jane Rowe. During February 1914 the Jane Rowe loaded up in Oran with three thousand tons of burnt ore bound for Rotterdam. 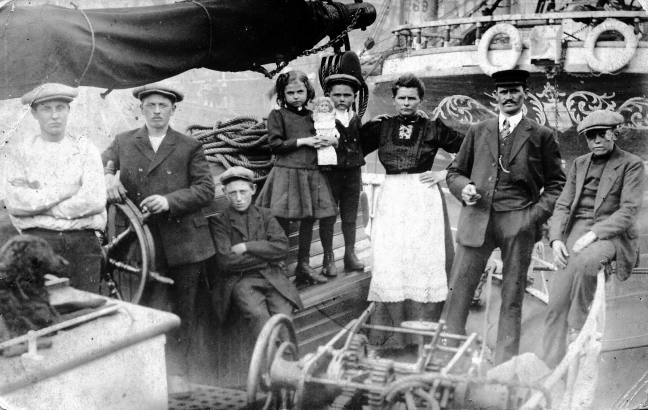 Photo of the crew. Chris verstappen’s grandfather is on the right of the photo, and the dog is on the left. Both were saved.

In the early morning of the 28 February, the Jane Rowe, surrounded by dense fog ‘somewhere off Salcombe’ ran gently aground on the only sandy bit of beach for miles around, right under Bolberry Down Golf Links about a mile and a half east of Bolt Tail. Shortly after dawn the wreck was sighted by the Kingsbridge Packet, a small steamer that plied between Plymouth and Salcombe. She closed the grounded steamer and passed her a tow but in the end could not budge her, and left to summon some tugs. 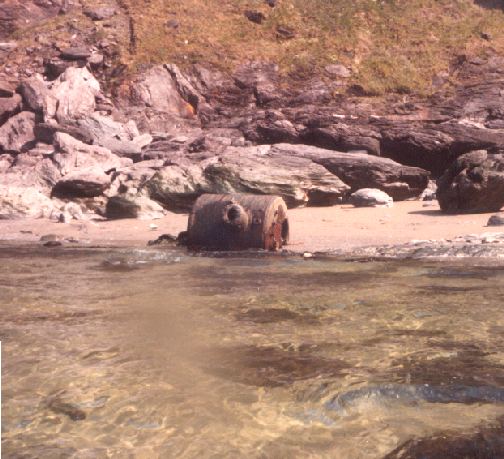 Small boiler from the Jane Rowe

Meanwhile a pair of early morning rabbit catchers had seen the wreck and notified the Coastguard who launched the lifeboat from Hope Cove. However when they arrived there was very little they could do except wait until the tugs arrived about three hours later. Whilst the lifeboat stood by, five tugs tried until half past nine at night to refloat the Jane Rowe, but to no avail. When the lifeboat and the tugs returned the next morning they found that the tide had pushed the stricken vessel further up the sandy beach, and that she was now lying broadside at the base of the cliffs. 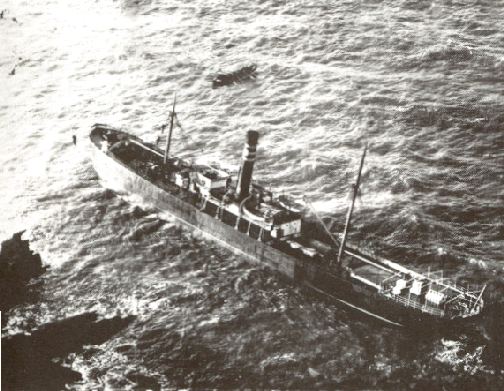 The weather had by now changed for the worse, and huge waves were breaking right over the ship, pounding the hull up and down on the beach. As the day wore on the Jane Rowe started to develop some serious leaks and it became clear that she was not going to survive. Since the lifeboat could not get close enough to the vessel to take the crew off and the crew steadfastly refused to jump into the huge surf and swim to the lifeboat, the rocket brigade was sent for. 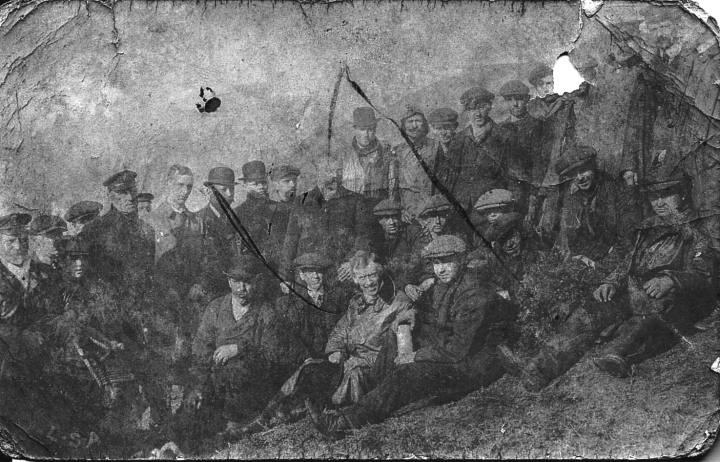 The Rocket Brigade arrive. Photo – Thanks to Chris Verstappen

A line was fired from the top of the cliffs and secured high up in the Jane Rowes formast, and a breeches buoy was swiftly rigged. Eventually all the crew were safely pulled off the wreck, including the ships kitten, a cat, and lastly a very large dog that nearly did for the crewmember struggling to save him. 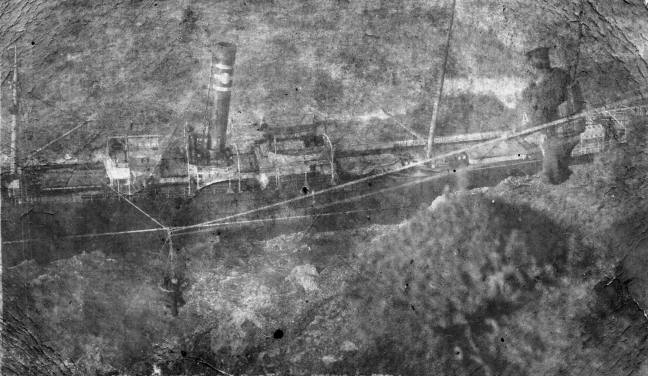 Pulling the crew to safety.Photo – Thanks to Chris Verstappen

After a while, the Jane Rowe, now a total loss began to break up and by the time the year 1933 came along she had all but disappeared, with only her boilers left to mark her going. Once again the stage was set and the little piece of sandy beach was ready to receive its next victim who turned out to be the Lowestoft drifter the Charter, which had been fishing out of Plymouth. 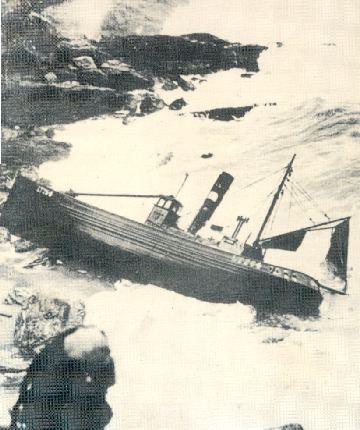 Once again fog was the culprit, laced with a small amount of over confidence, which caused the Charter to run aground on the afternoon on 7 January on a full tide. There was an aggravating ground swell and a fresh wind blowing up which drove the fog away, but the well-built trawler lay comfortably on the sandy beach. Comfortably that is until the tide started to ebb and caused the trawler to fall over on her beam-ends. The crew, ten in all, had by now vacated the Charter and were stood around unconcernedly on the beach waiting to see if they could refloat their boat on the next tide. The lifeboat, this time from Salcombe, had arrived to stand by the vessel, but soon saw that she was not going to be needed. Unfortunately when the next high tide arrived it became obvious to the crew that the Charter was beyond refloating, and all they could do was salvage whatever equipment they could. Once more the beach had claimed another ship, but thankfully no lives had been lost on either occasion. Soon the Charter would begin to break up and her wreckage mingle with the rusting remains of the Jane Rowe until eventually they would be as one.

The steam tug Joffre ran aground just to the left of the Jane Rowe in 1925 but was refloated six weeks later and was finally broken up in 1966.

Nowadays it is very easy to sail straight past the little sandy beach as the boilers have blended very well into the background. However as the tide ebbs a small boiler is clearly visible lying in the middle of the sand, and over to the right on a rocky ridge you suddenly realise that the rocks are of a regular shape, and you then see the two other boilers which are much bigger and therefore probably come from the Jane Rowe.

It is probably best to wait till near high tide to explore the rest of the wreck as it is all extremely shallow, and has an irritating ground swell at low tide. Because it is so shallow you really only need a snorkel to find the main points of the wreck and this makes it very suitable for youngsters and non-diving wives. Right in front of the beached boiler are the stern ribs of the hull of the Jane Rowe lying across the beach. Quite often these are covered in sand and not always visible, as is a large piece of mast some fifteen feet long, and part of a deckhouse which is nine tenths buried in the sand a little further out. Other pieces of plate can sometimes be found, but I think it would be fair to say that most of the Jane Rowe is now buried somewhere down in the sand.

The French trawler Tarascon in Steple cove in 1938.She was refloated on the next spring tide after all the crew had been dragged to safety through the heavy surf.

However over to the right of the beach stand the other two boilers, one upright and the other lying on its side. As the swell hits these, water gets trapped inside the boilers and is then explosively forced out through small holes in the iron plating making a noise like a sounding whale and heaving a fine mist of spray into the air. Further around smashed into the rocks are the remains of the Charters bows (I think) and various other pieces of wreckage that continue along the bottom of the rocks and into the next little inlet. Everything is well smashed up but it is interesting to try and piece it all together, and also to try and separate the two wrecks. The thing about these wrecks is that you never know for certain which one you are on, so if you like crosswords or puzzles this is the place for you.

In any case it is a very beautiful area, and on a flat sunny day, an extremely pleasant dive. Anything else has got to be a bonus.