Experience with earlier types of destroyers had convinced the Navy that going just for speed was a delusion. What they really needed was a much tougher type of boat that could keep going at relatively high speeds when the weather got really rough. To this end the Navy commissioned a new type of destroyer that was to provide the bench marks for all future Navies, and designated it the River Class. Well over thirty were built before the Great War, and one of them was HMS Foyle. 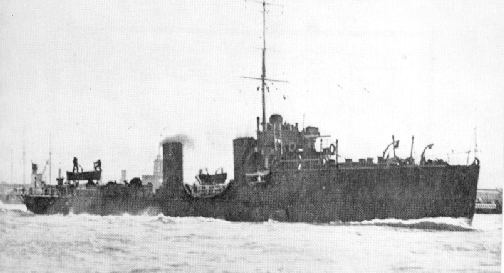 Laid down at Cammel Lairds shipyard in August 1902, the Foyle was launched in February of the following year and entered service thirteen months later in 1904. 225 feet long with a top speed of twenty five and a half knots, the Foyle was armed with four twelve pounder guns and two torpedo tubes. At first her slower speed (anything under thirty knots was considered very odd) caused some ill informed comment, but it was soon realised that the sturdiness of her design allowed her to maintain her top speed in all but the worst conditions, and soon her critics were silenced.

When War broke out the Foyle found herself performing patrol and escort duties in the killing ground of the Dover Straights. On the night of March 15th 1917 she hit a mine, and the force of the explosion blew away the whole of her bows forward of the bridge, killing twenty-seven of her crew of seventy. Unbelievably the stern half stayed afloat, and it was decided to tow this to Plymouth, presumably to graft on another bow. What the thoughts were of the tug crews who had to place the tow on a helpless drifting hulk in the middle of a potential minefield we can only guess, but eventually the tow was established and the Foyle was led away towards Plymouth. Alas there was to no happy ending. After surviving the minefield and slipping through a screen of marauding E boats, the salvage crew on the Foyle just could not keep up with the water pouring through her ruptured plates, and only a few miles from Plymouth HMS Foyle gave up the fight and sank in fifty meters of water miles off the Mewstone. 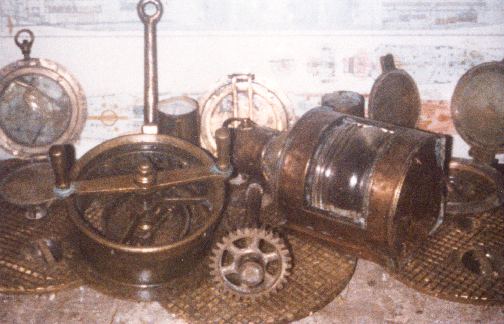 Sadly none of these are mine.

One of the main troubles about diving on a wreck as deep as the Foyle is the lack of time that you can spend on her. If you are diving this wreck on a one off basis, then you really will not have a clue where you are on it unless you stumble onto the gun at the stern section, or blunder into the bridge. You really need to go with somebody who knows the wreck so that they can explain to you after the dive where you have been, or pray for uncharacteristically good visibility. Having said that, the one thing that anyone will recognise is the brass. On the few dives that I have done on this wreck everywhere that I have looked there seemed to be large lumps of non ferrous metal, either portholes (to firmly fixed for me) large copper pipes and brass valves, or on one occasion, what seemed to be the top of a binnacle.

The Foyle now lies on a sandy seabed with what appears to be a thirty-degree list. Most of the portside is buried in the sand and the rest of the hull has caved in. However her boilers seem to be mostly intact, although other divers say that one boiler is probably buried in the wreckage. At the bridge end is a great mound of iron plates and girders covered in shoals of swirling pollack and pounting. Somewhere in all that junk should be three of the Foyles twelve pounder guns, but I must confess I have never seen them. Lobsters abound on the wreck as do congers, and because the wreck is heavily fished by local anglers quite a bit of fishing gear is left lurking to entangle the unwary diver. 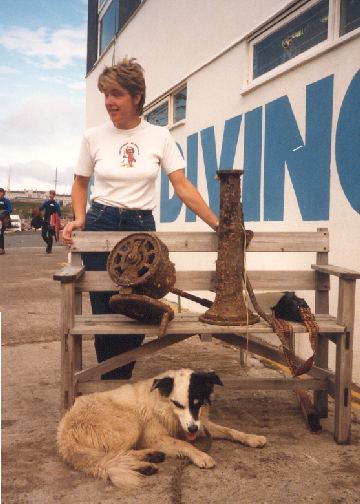 Somewhere towards the stern are the remains of the torpedo tubes. Back in the Sixties rumour has it that one of the Foyles torpedo tubes still had a torpedo left in it. When this torpedo was duly liberated and placed on dry land, the salvers became so blinkered as to the profit on the non ferrous metal, that they seemed to completely forget all about the couple of hundred pounds of Amatol explosive that was by now highly unstable.

When the Police arrived on the scene they found the scrappers gaily hacking at the torpedo with lump hammers and crowbars, with the explosive oozing out of the cracks that they had made. Seems unbelievable doesn’t it? But as I say it is only a rumour.

The Foyle is probably the deepest wreck off Plymouth that you can still find just on the marks. But because she only stands up about fifteen feet from the seabed, and is such a long way down, a good echo sounder is really a necessity. Once you have found her you will be able to fine-tune the marks to suit your boat handling techniques, and then you should have no further trouble. If you can arrange a series of dives on the Foyle, so much the better as it is very frustrating to see something that you cannot get off in the short time available. In recent years local clubs have had some very impressive trophies from this wreck, but for the dedicated wrecker there is still an awful lot left.

I am extremely gratefull to Russel Peekfor this photo of his great grandfather Samuel Peek, who was a stoker on H.M.S.Foyle. Sadly he did not survive her sinking. 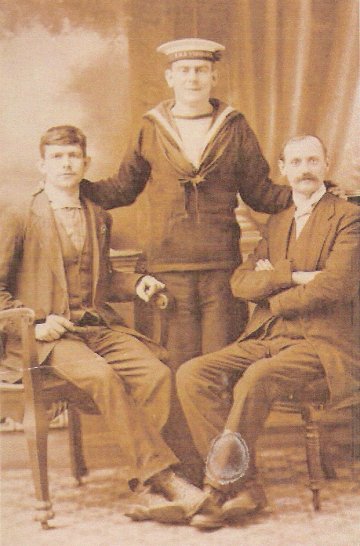 Stoker Peek is seen here with members of his family and wearing an ‘H.M.S.Vengeance’cap tally.

I am very grateful to Mark Lawrence for the photo and information below. 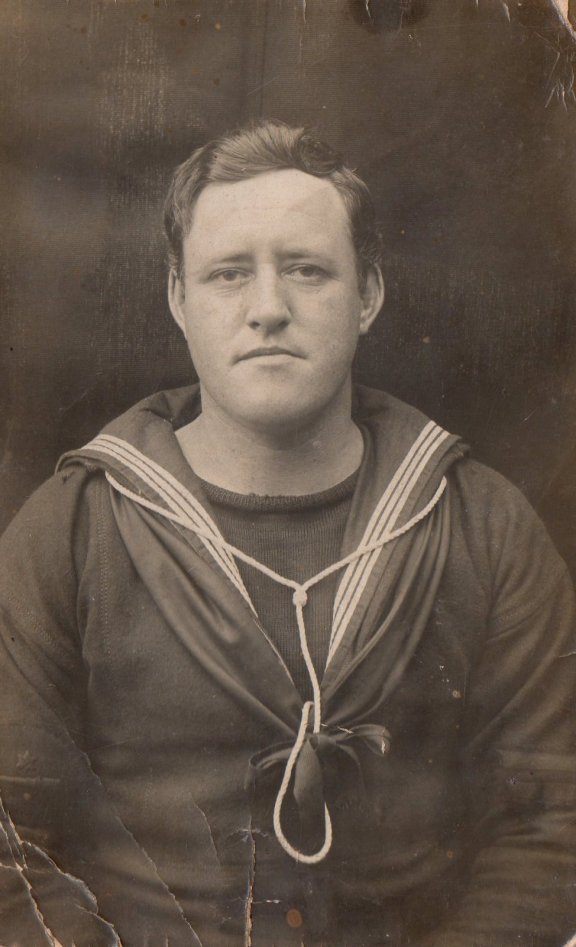 Able Seaman George Arthur Gander -191637- was serving aboard HMS Foyle, when she hit the mine. His body was not recovered. His wife Rose of Gillingham, Kent was notified of his death. He was born in Brighton in 1881.

I am very grateful to Tony Game for the photo, and information about his Grandfather, James Alfred Alexander Game.(He writes) I don’t have a photo of Granddad as a young man, but this is the last known photo of him at the christening of his great granddaughter in the summer of 1970. Along side him is his eldest Grandson Larry James Game 1941-1989. This is also the day that granddad died 1895-1970.

I am very grateful to Roger Dingley for all the information and photo’s below about his uncle Alf Russell.There is also a sound bite of Roger’s mother, Edna Dingley talking about Alf.

Alf Russell (seated) about 20 with friend.

Model whaler made by Alf Russell.

Below is the citation issued by the Navy on his death. This gives the dater on his birth and death. The Census records for 1911 indicate that he was living in Harborne with his parents, but working as a screw turner. He was a trained engineer which probably made him a natural to go into the Navy as an ERA, but we have no record of his training, or exactly when he joined.
Name: Alfred Russell Rank: Act ERA 4th Birth Date: 24 May 1890 Birth Place: Great Wyrley, Stafford, England Branch of Service: Royal Navy Cause of Death: Killed or died as a direct result of enemy action Official Number Port Division: M.19746. (Ch) Death Date: 15 Mar 1917 Ship or Unit: HMS Foyle Location of Grave: Not recorded Name and Address of Cemetery: Body Not Recovered For Burial Relatives Notified and Address: Mother: Carrie. 10 Margaret Grove Harborne, Birmingham