If there is one quality that a wreck diver should have in abundance it is the ability to think positive. So many times divers give up on good potential wreck sites because they become discouraged all too quickly, and then talk themselves into believing that the wreck is not there anyway. It is all too easy to do especially when under pressure from your diving buddies to get on to a ‘proper’ wreck and stop fooling around in the kelp. Still if your budding wreck hunter wishes to come up with the goods, then he or she must ignore the peer pressure, increase their research, keep the faith and continue to dive the site in the firm belief that eventually they will find something. 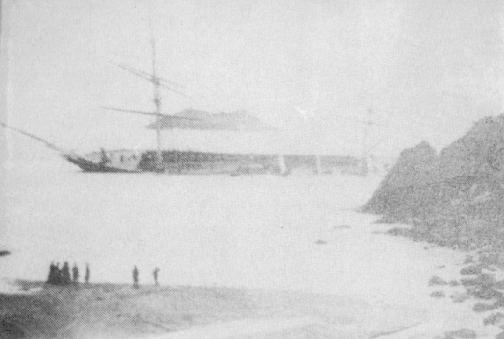 Now on every dive I do, I honestly believe that I will find something, anything from a fork to a porthole. On most dives of course you do not find anything, but at least you are ‘tuned’ in and ready to spot the slightest clue that could lead you finally to your wreck. If you think about it the law of averages are firmly on your side. If you put enough dives in then eventually you must find something, especially if your research is spot on. But you really must believe in your own ability or you will just give up and go home. A good example of this power of positive thinking is the wreck of the China tea clipper Halloween which struck the shore just inside the Hamstone on the edge of Soar Mill Cove on the evening of January 17th, 1887.

The Halloween had the reputation for being one of the fastest ships of her day. On her maiden voyage in 1870 she took only sixty nine days to get to Sydney, and held the record for the fastest passage between London and Shanghi which she completed in a mere eighty nine days. The tea clippers represented the very pinnacle in sailing technology, and a major part of the Halloween’s success lay in her seventy eight foot mainyard from which flew a huge mainsail. Iron hulled and sporting three masts laden with sails to catch every ounce of wind, the Halloween could cram sixteen hundred tons into her vast holds worth well over forty thousand pounds. 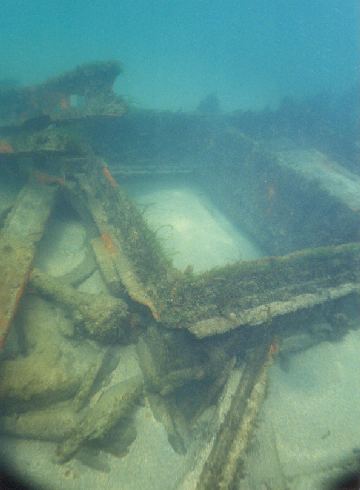 You can just see part of an anchor.

On what was to be her final voyage, she sailed from Foochow loaded with tea bound for London. But this time no records were to be broken. Right from the start bad weather slowed the Halloween, and it was to be one hundred and fifty five days before her exhausted crew finally saw the Eddystone Light Square on her starboard side. A new course was set to safely take the ship some eight miles off Start Point.

Running in huge seas, with the rain and wind beating relentlessly on the huge spread of sails, the Halloween somehow deviated from her set course, and in the howling darkness unsuspectingly drove in towards the shore. At half past seven in the evening the Halloween ran full tilt inside the west end of the Hamstone and crashed onto the rocks at the edge of Soar Mill Cove. She was done for. In the heavy seas it was impossible for her to escape. The waves smashed the forecastle and cabin forcing the crew to take to the rigging until that too parted and they reluctantly returned to the deck. Flares were sent up, and even a bonfire built on the afterdeck, but nobody on shore took any notice. 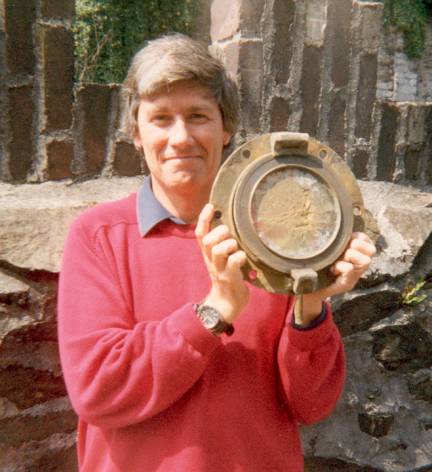 In the early morning three of the crew volunteered to try to take a line ashore. It was a desperate idea and unfortunately one of the brave volunteers was drowned in the attempt, but the other two managed to scramble ashore and stagger up the cliffs until they came to a farmhouse. More dead than alive they managed to stammer out their story to the farmer who quickly sent a message to Hope Cove, and the lifeboat was launched at about eight thirty.

After a journey of almost an hour and a half the lifeboat managed to come alongside the Halloween and with some considerable difficulty extricated all nineteen crew who by this time were nearly frozen solid from their rigorous exposure to the bitterly cold conditions. Within three days the ship was broken up by repeated storms and her cargo of tea washed out of her broken hull and swept into Soar Mill Cove were it formed an almost impenetrable barrier some twelve feet high. Over the years the Halloween broke up and in time most of her was covered by about eight to ten feet of sand. The odd rusty plate and rib could be found close by the rocks but nothing much more. Slowly even they became covered by the sand and soon her passing became forgotten. 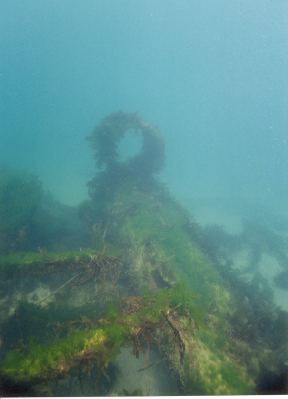 Part of the bowsprit.

After researching this wreck Steve Carpenter and I were fairly sure that it was findable, and over about three years we dived in the area usually on the way back from other dives around Salcombe. In all that time we found absolutely nothing but still remained convinced that one-day the wreck would surface. In February 1990 Steve took his dog for a walk at Soar Mill Cove. The tide was out and to his surprise so was most of the sand. What had been a beautiful sandy beach was now all rocks. Neither of us realised the significance of this until early May. Because of the storms, diving close to the shore in this area was useless due to the stirred up visibility. But as the high-pressure systems settled down and the good weather continued I decided to chance it and go and take some photographs of the Cantabria. 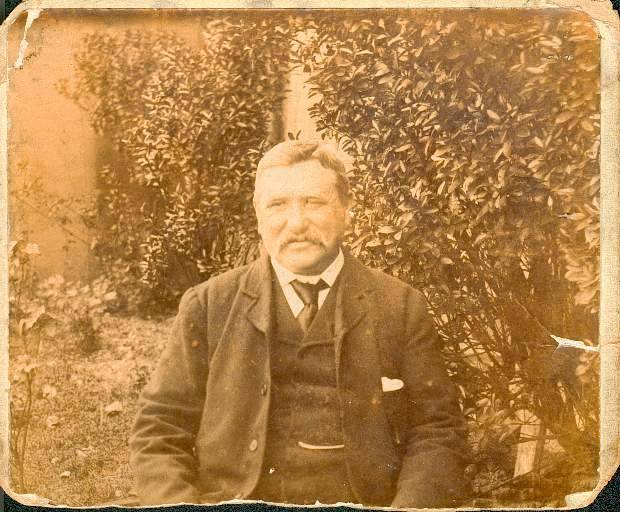 Captain Robert Warrender Fowler, Master of the Halloween between 1875 and 1882.

Conditions were good so on the way back I thought of having a snorkle in Soar Mill Cove, and cruised around in the boat. There was a small ground swell, which made anchoring into just sand a bit difficult, but the water was nice and clear. Since the bottom was only about fifteen feet I looked for a clump of rock to anchor into. Over to the right of the Cove I saw a dark shadow, and thinking it denoted rocks I threw my anchor in. When I was satisfied that the boat was well hooked, I assembled my camera gear and jumped in for a look around. Immediately I saw that I was hooked into a wreck. Right underneath me in twelve feet of water was a huge hatch, part of a bow, and a massive mast lying out across the sand. I just could not believe it. Steve and I, and the rest of my diving partners had dived this exact area on many occasions and found absolutely nothing. Now, at last, here was the wreck. At the bow (just like the photograph) you could see the remains of the once proud bowsprit, with wooden decking all around. As I ducked down again, I held onto the anchor rope to pull myself down. As I slowly turned to my left there, not twenty feet from my anchor lay a complete porthole glinting in the sunbeams. Now I knew what heaven was going to be like. 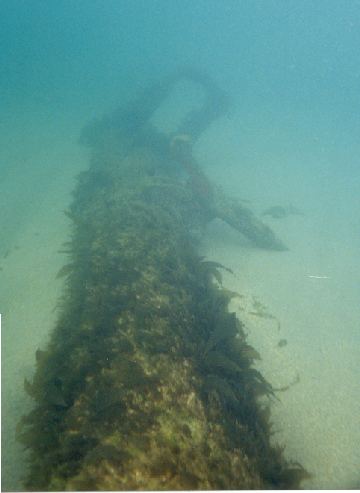 One of the huge masts.

Secured only by a few rusting bolts it came away easily and when cleaned up revealed its maker’s name, J. Stone and Co. Deptford London. The rest of the day was really an anti climax, but as I drifted around the rest of the wreck I realised that there was almost no weed growth on any of the exposed wreckage. This meant that it had only been uncovered for a few days at most. (We took some photos for comparison a month later and the wreck was almost obscured by weed). I had been incredibly lucky. Over the next few weeks different sections of the wreck started to appear, the lines of the hull for instance just pushing up through the sand near the rocks to the left of the Cove. But as the year progressed no other major sections appeared more than a foot above the sand. 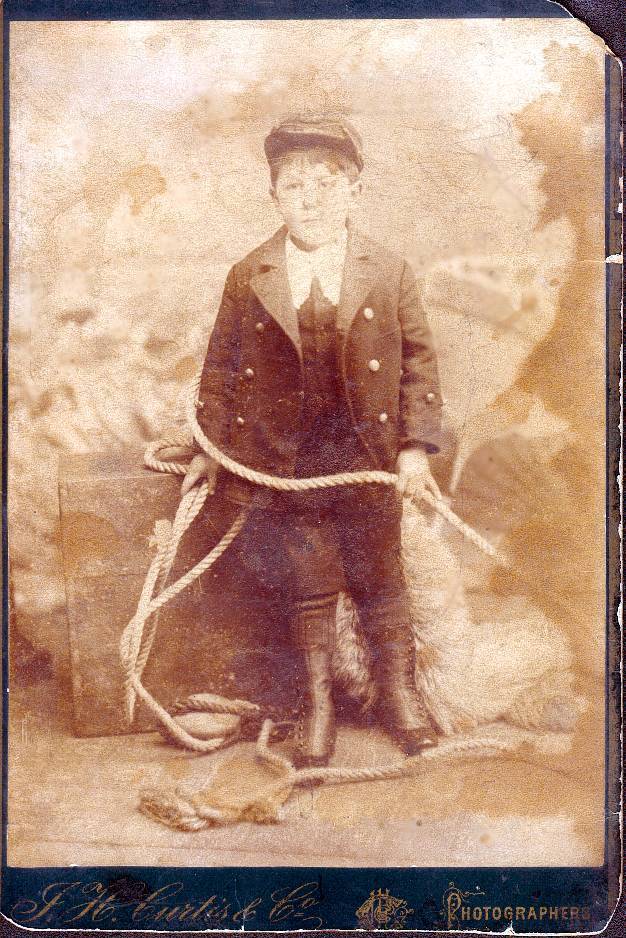 Captain Fowler as a boy.

Back in the main bow section, near the huge hatch, I later found two large anchors complete with some chain, and some large pulley blocks that were probably used to secure the boom. Steve, rooting in the sand by one of masts pulled out a superb wooden Monkey block, and uncovered another large iron boom. As a dive in the long hot summer that we experienced that year it was magical, almost like being in the tropics. The fish although fairly small were many and varied, and even cuttle fish seemed content to play hide and seek around the wreckage without getting too frightened. Will any more of the Halloween appear, or will the storms shift the sand yet again and cover her for good? We shall have to wait and see. Whatever happens the Halloween justified my faith in positive thinking, and to see her after all those years is reward enough for me. 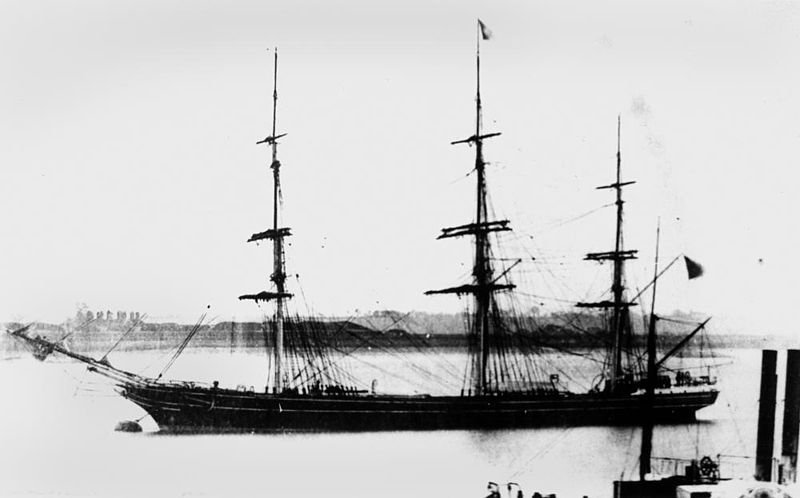 I am indebted to Dave Foker and his family for the photos of Captain Warrender who was his great great grandfather on his mothers side. (You work it out) He also sent me the following information which I hope is of interest.

Although launched on the 4 June 1871, the Halloween was not handed over untill late 1871 when the numerous lawsuits had ended between her owner, John Willis, the underwriters, and Maudslay, Son and Field of Greenwich, her builders, concerning the dismasting of the Blackadder which was her sister ship. Built of iron, Halloween measured 216 ft. long, 35.2 ft. in the beam with a draught of 20.5 ft. with tonnages of 872.38 under deck, 970.99 gross and 920 net. She had a 78 ft main yars and an under deck tonnage coefficient of only 0.55. She was very fast in light airs but was not so powerfull as Cutty Sark, although she made runs of 360,341 and 338 miles in the roaring fourties.

On her maiden voyage she went out to Sydney in 69 days and brought home wool, being too late to load tea. She was in the tea trade all her life and was finally wrecked on 17 Jan 1887 in a force 9 gale.

Her early passages are truly remarkable even though they were made in the fair monsoon. These consisted of:

I keep tabs on this site, and in August 2006 parts of the Halloween reapeared for about two months. here are some pics that Peter Rowlands took and a small bit of video. 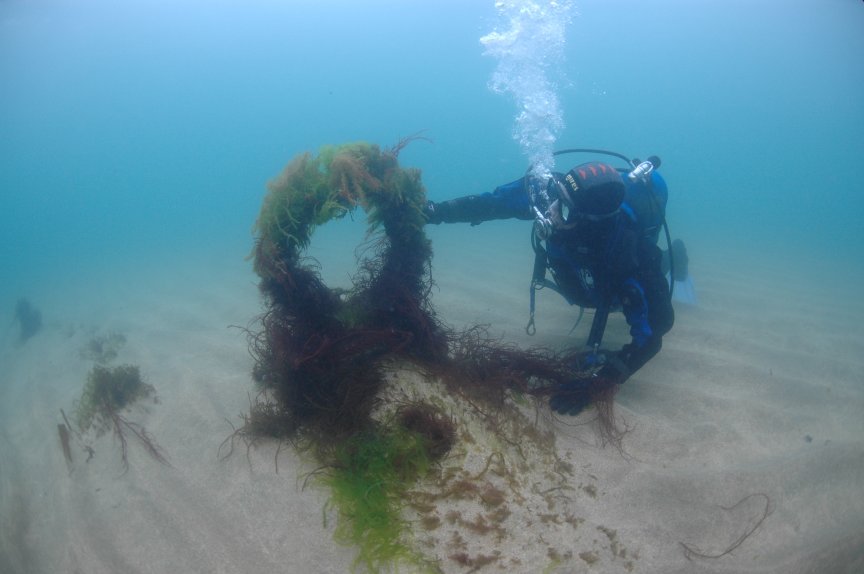 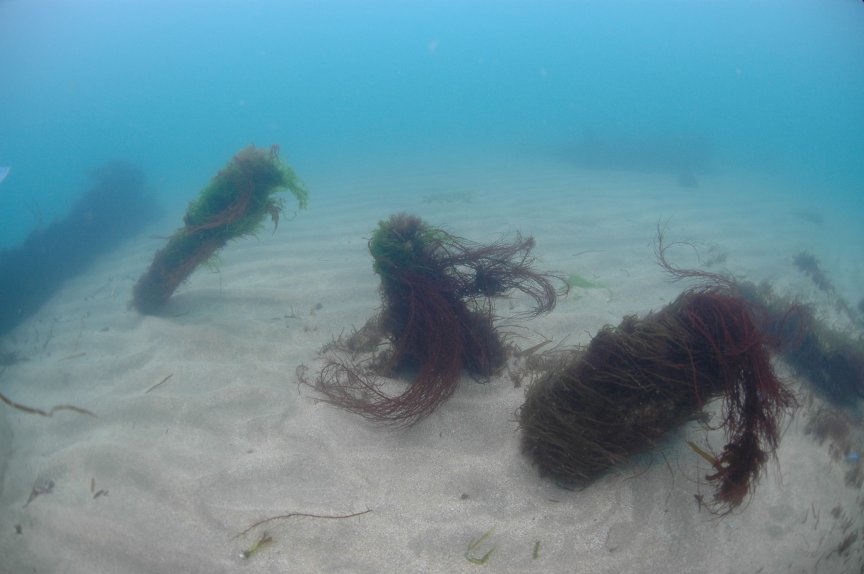 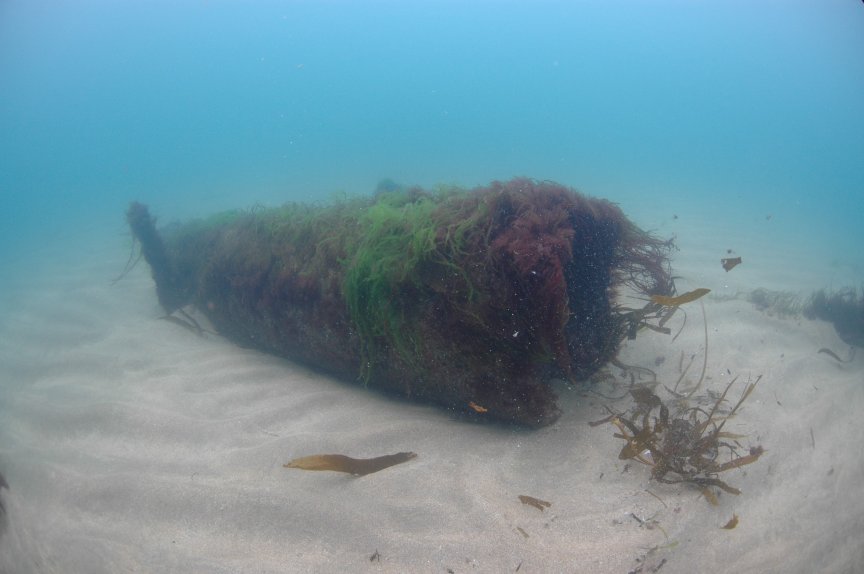