During the winter months when the south west gales are blowing and the rain is coming down in sheets, boat diving is often more trouble than it’s worth. Often I go shore diving around Bovisand or Heybrook Bay. It is usually quite sheltered in the little coves, and if the weather is really that bad, then you can be in and out in less than half an hour. It is quite often more fun than it sounds, and anyway it helps maintain your diving trim. One of the bonuses that the winter storms bring is that they shift all the sand about and cut down the kelp. You never know what will turn up, and it was on one such dive that I came upon the remains of the Vectis. 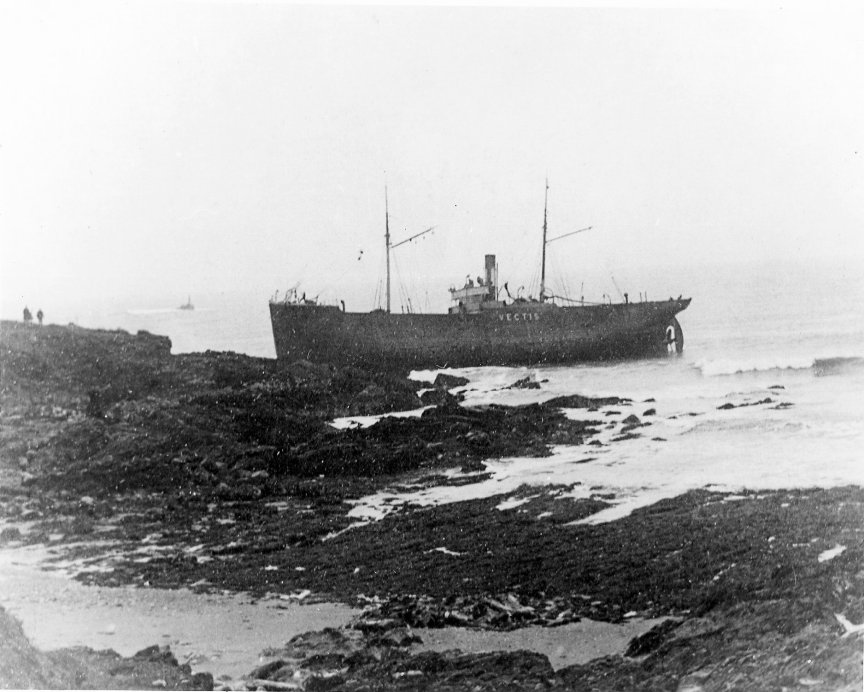 The Vectis was a two masted steamer of 907 tons, owned by John Hill of Sunderland. During February of 1912 she had unloaded her cargo of coal in the Cattewater, Plymouth, and on the fifth day of that month she once again put to sea. It was a misty afternoon with quite a strong breeze blowing. Once the Vectis got outside the Breakwater, her steering equipment broke down and before anything could be done to rectify the situation, the Vectis steamed full tilt onto the rocks near Adurn Point. When she hit, she went right up onto the rocks and lodged in a completely upright position. There was quite a large swell running at the time, and large waves were beginning to break over the stern. The captain and the crew decided to abandon the vessel, and having safely clambered aboard the ship’s lifeboats, they made their way back to the Barbican at Plymouth. 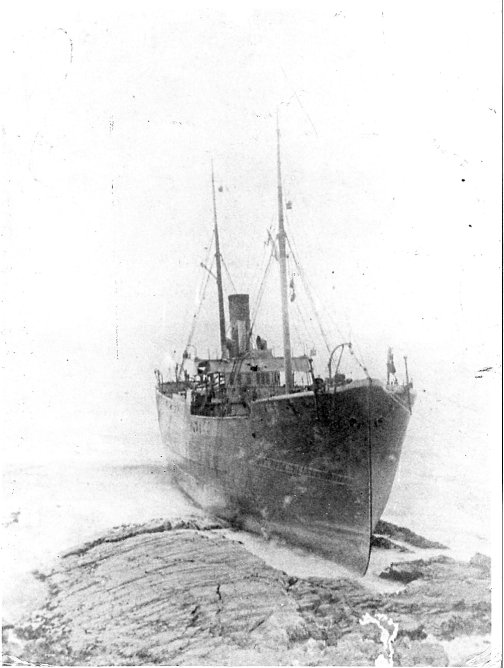 Since the Vectis had struck at almost low tide, everybody thought that she would be comparatively easy to float off. However she was stuck hard and fast, and over the next few weeks no amount of effort seamed to make the slightest difference. As the weeks turned into months interest waned and soon she was declared a constructive loss. Later that year in the famous Christmas Hurricane of 1912, she was smashed to pieces and erased from most people’s memories. 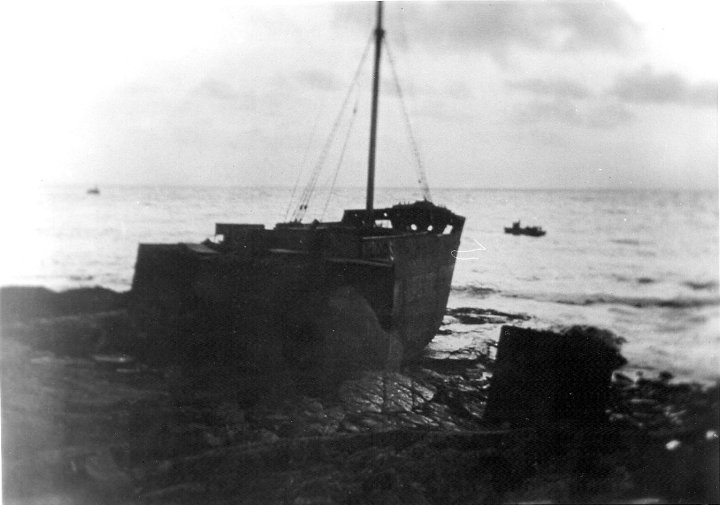 The Vectis after the Christmas Hurricane.

Today the remains of the Vectis lie scattered from the edge of Bovisand Bay, all along the coast to Renney Rocks. The place where she struck is quite easy to find as it lies right underneath a large navigation beacon which has since been built on the shore. At low tide you can see large pieces of iron fused to the rock, and in the shallow rock pools you can find pieces of broken dinner plates, bottles, door knobs and rusting pieces of hawser. Further out on the sand, but still only in fifteen feet of water, lie much larger pieces of the wreckage, but they are sunk deep into the sand. Sometimes they stand four or five feet above the seabed, other times it’s more like six inches. 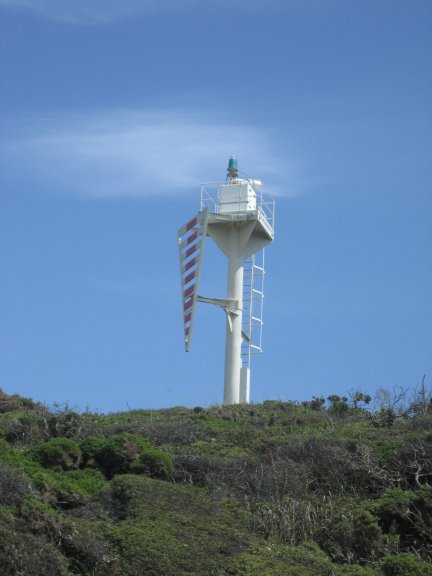 The Whitby Light at Adurn Point.

Although the site is slightly protected by the Renneys, large rollers can build up making entry and exit very difficult. The rocks are very sharp and quite often the only access back to the shore is through narrow gullies which can be very difficult to relocate. However, on a calm day the spot provides near ideal conditions for a shore dive. Once in the water pieces of wreckage are immediately quite visible, mostly consisting of broken spars, small jagged pieces of metal, and lots and lots of broken pottery. 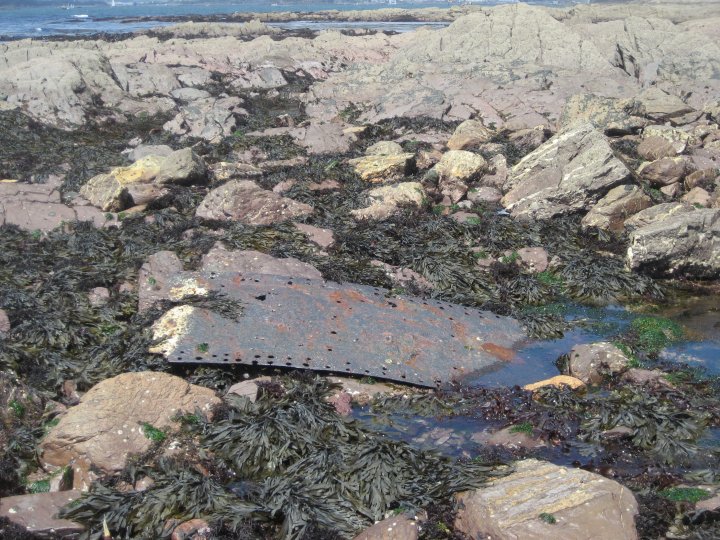 Pieces of iron and pottery. 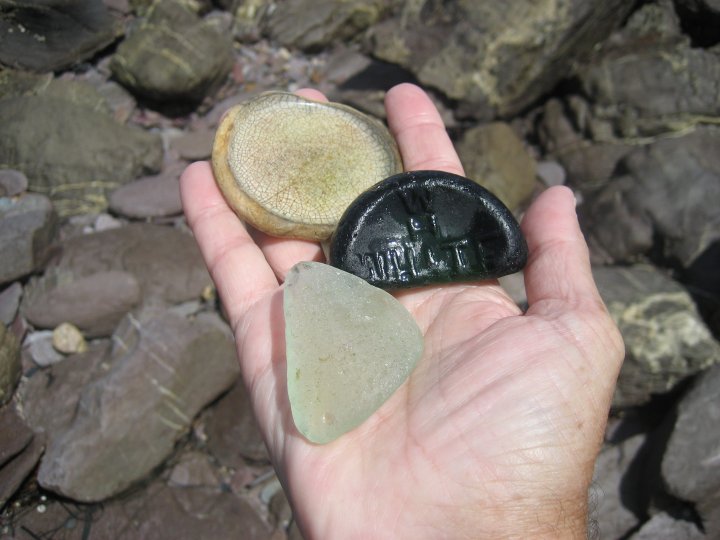 Pieces of iron and pottery.

The underwater terrain is extremely rugged with long gullies running out from the shore into deeper water. The maximum depth here is only about twenty feet, and the scenery can be quite breathtaking on a sunny day, with the sunlight reflecting off the purple and green seaweeds which coat many of the rocks. Here amongst the rocks it is still possible to find many everyday artefacts like inkpots, door knobs, and a fair amount of spoons and forks. About three hundred yards from the shore the gullies give way to rocky clusters set on sand, with a large amount of kelp. Here on the sand you will find lots of boiler coke scattered around, and also quite a few cannonballs as well. Unfortunately these come, not from any wrecked ship, but from past target practise at Fort Bovisand. 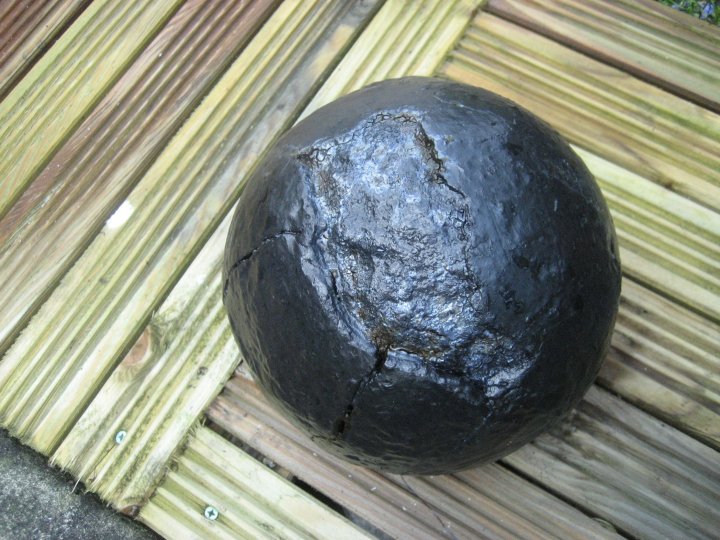 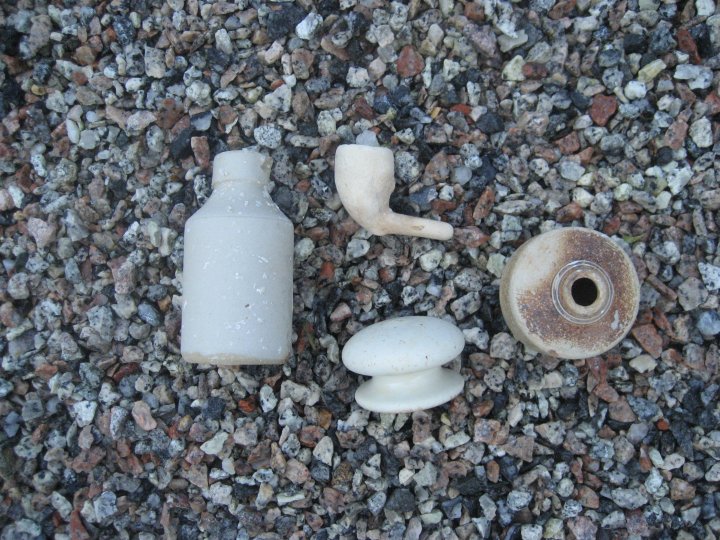 A doorknob,inkpots and a pipe.

As you swim back to the shore, you should swim over some of the larger pieces of wreckage that I mentioned earlier, and as you approach the shoreline keep a sharp look out for the keel frames. If the sand has been washed away they are plain to see. But if not you should be able to trace them from the marks made by the Vectis when she was swept off the rocks, and which are still visible at low tide. Although this area has most of the wreckage, it is also possible to find bits and pieces all along this stretch of coast, the most common being old electrical fittings like light switches and porcelain insulating collars. There is a small boiler half buried near Bovisand Beach, and near Heybrook Bay are masses of broken pottery and pieces of metal which might be from the Vectis, or from the Nepaul which was wrecked on the Shagstone in 1890. Even if there was no wreckage, the area would still be a good shore dive. But with the added attraction of a little known wreck site, the place becomes quite absorbing, and should give anyone hours of very pleasant diving.