One of the last warships to be built at Plymouth, Scylla was laid down at Devonport Dockyard in 1967, and launched in August 1968.After her fitting out she was commissioned on 14 February 1970 and went on service in the Mediterranean where she assisted H.M.S. Penelope in underwater noise trials. This consisted of Penelope being towed by Scylla at the end of a mile long, eleven-inch cable at 23 knots. (I would like to have seen that.) 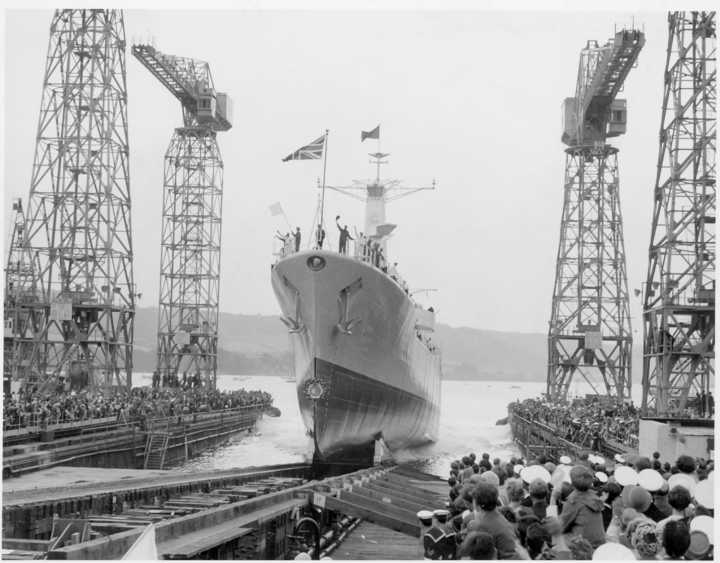 The Scylla being launched.

In 1976 she was involved in the Cod War in the waters around Iceland, and later saw service on the Biera Patrol, Belize, and as the West Indies Guard Ship. At the outbreak of the Falklands war in 1982 Scylla had just started a major refit. But this had to be put on hold as men and materials were reassigned to the battle damaged ships. So urgent was their need that parts of the Scylla were ripped out and cannibalised to speed up the repairs. Finally her refit was finished in December 1984 and she spent the next eight months becoming fully operational before taking part in a major exercise codenamed Autumn Train. Later she was a regular member of the Armilla Patrol in the Persian Gulf escorting British Merchant ships through the Straits of Hormuz at the height of the Iran, Iraq war in 1986 – 88. 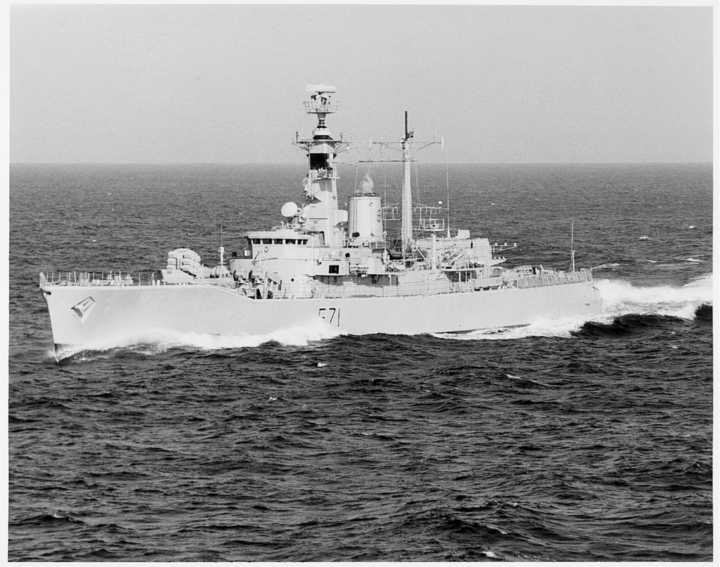 By the beginning of the nineties Scylla was obsolete, and in 1993 she was decommissioned and left to rust. That would have been the end of the story except for the intervention of a couple of local divers, Nick Murns and John Busby, who thought it would be a great idea to bring the Scylla back to her home port and sink her over in Whitsands Bay near the James Egan Layne so that she would form an artificial reef and add another diving attraction to Plymouth. 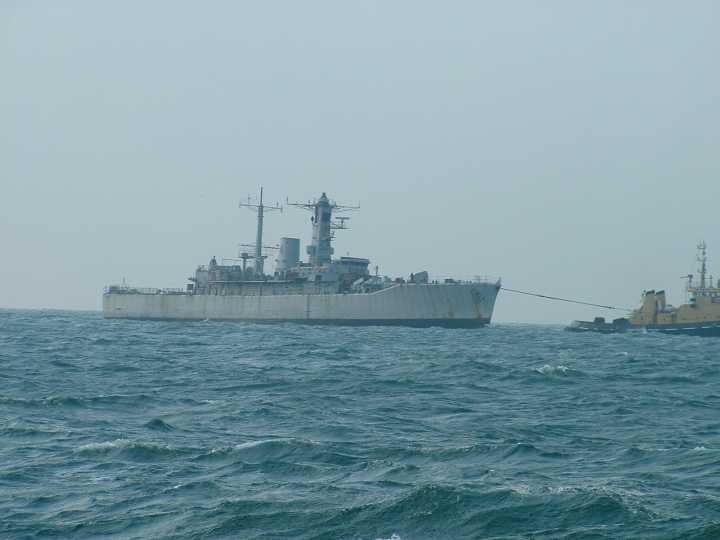 The Scylla arriving at Plymouth for preperation.

They formed the Artificial Reef Consortium and drummed up a lot of support and interest but the project got bogged down in the inevitable tangle of red tape. In the end the National Marine Aquarium came on board, and the Scylla was bought with the assistance of the South West Development Agency for around two hundred thousand pounds. It took over five years to get all the relevant permissions and to make the Scylla ready to sink, and it is a testament to the tenacity of the two local divers and the Aquarium that the project was brought to a successful conclusion. 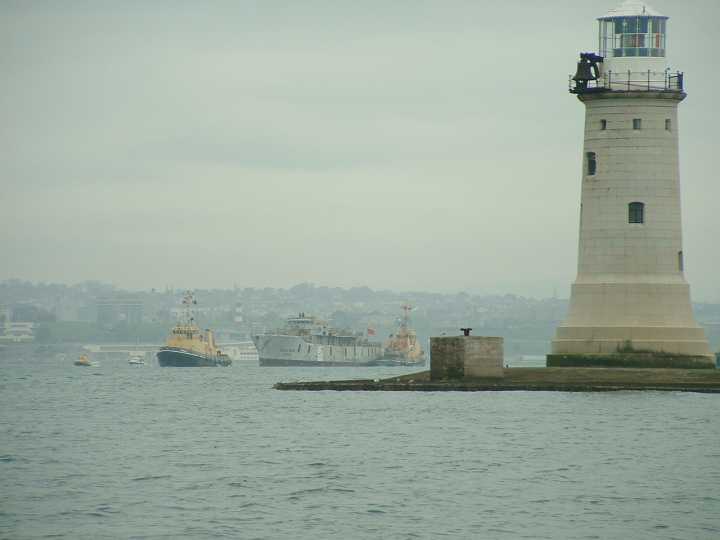 Scylla being towed past the Breakwater en-route to her final destination.

At last on the 27 march 2004 the Scylla was towed out of the Dockyard and around Rame Head for the last time and slowly manoeuvred into position to await the final safety checks. Amongst the crowds in the flotilla of small boats and lining the cliffs, was her last Captain, Mike Booth, who had come to say his final farewell. 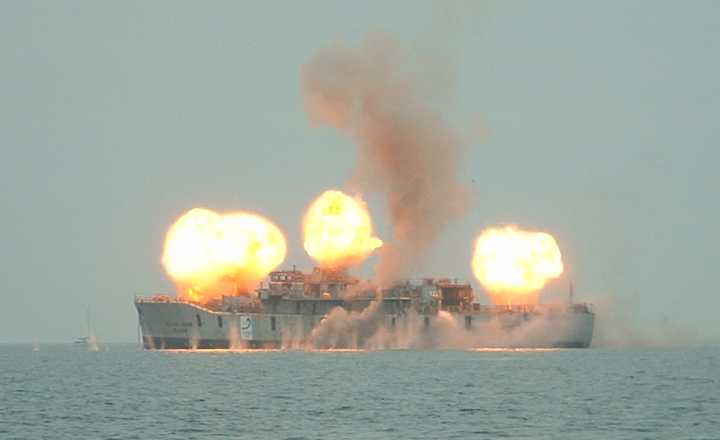 The Scylla had fifty detonators placed around her hull and at around three o’clock, David Bellamy the well-known naturalist, and Daniel Green, a twelve-year-old schoolboy who had won a local competition, jointly pressed the plunger. There was a massive bang, huge balls of flame, a mass of smoke, and down she went as if grateful to be doing something useful after all those years of neglect.

The Scylla is one wreck you don’t need to find as the site is buoyed with a big red buoy, and the wreck itself has three large yellow buoys stationed at the bow, middle and stern. No chance of missing it then. So what’s it like? Because it is such a recent wreck the absence of marine life is quite spooky. You normally take all that for granted so it’s a bit lonely down there. 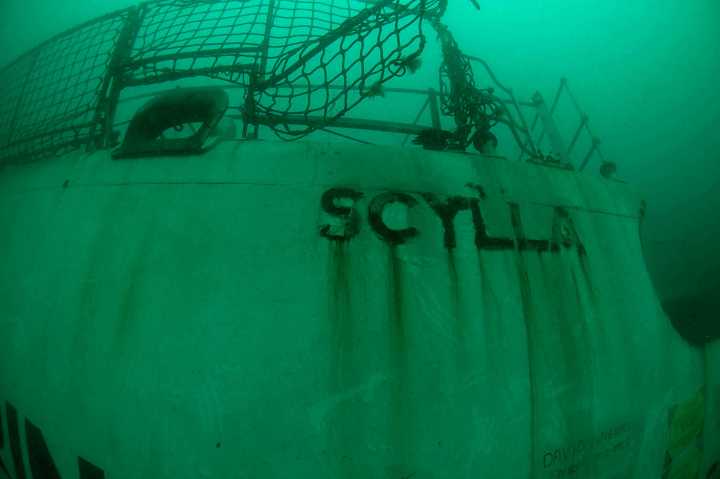 The Scylla is sitting upright with a small list to starboard that is getting slightly more pronounced with each passing month. On the first dives you hardly noticed it, but you will now. This leaning will slow down though in future months as the boat settles into her silty berth. The ship has been stripped of just about all its top hamper, funnels, radar mast, and the gun went years ago when it was converted to missiles. So it is to the bridge that most people go first but even this only has a few switches. All the doors have been removed or held open and there are notices everywhere telling you to be careful and to check your air. From the bridge you can wander aft along the companionways peering into compartments and examining various tallies and switch boxes that are still around. There are also a few signatures from the towing crew and some clubs have stuck up their clubs insignia. 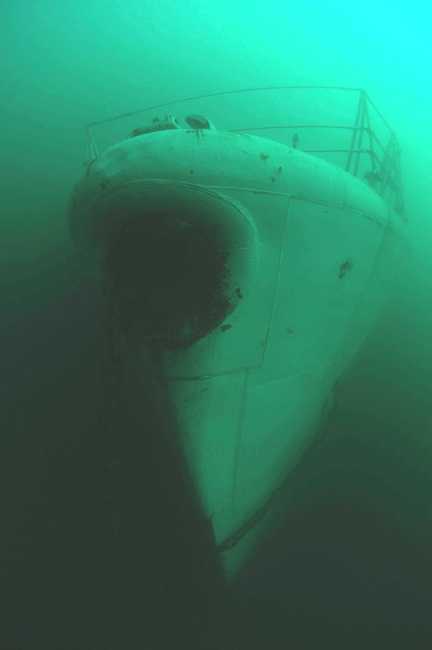 At the stern is the flight deck and hanger for her helicopter and you can go down and see the bronze prop shafts partly buried in the mud. If you want to go inside its quite easy as great holes have been cut in the sides to effect entry and exit points, and its fun to swim in and out of the cabins and little workshops. However it’s worth noting that there are some dead ends that you cant get out of so don’t go thinking that you can suspend your normal caution. There is a nice machine space full of valves and machinery which last week (5 June 04) was starting to fill up with small fish and I particularly liked the Burma Road as it kinks all over the place because the sinking team took out several bulkheads. 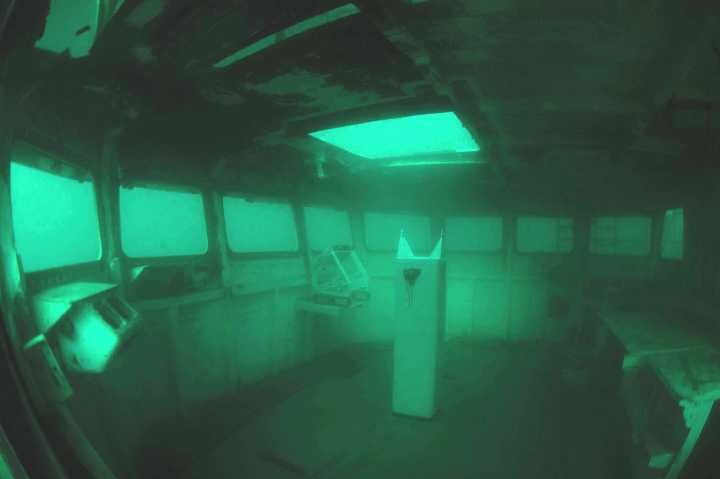 Inside the bridge.( photo Sally Sharrock )

Because it’s so new you almost expect to see someone working as you poke your head into a cabin. Forward towards the bow it’s worth swimming along the top of the deck as there are all sorts of nooks and crannies and holes going down inside the ship. Hanging of the bow is great as you can see all of it looming out of the murk with the anchor chains sweeping down to the seabed. Also a scour has started around the bow allowing you to see right underneath it. The Scylla is a welcome addition to Plymouth’s sea bed, but it’s a great shame that so much was taken from the Scylla, as its robbed her of most of her personality. But as the fish arrive and the winter storms rearrange her, she will no doubt regain some of that and become a welcome addition to Plymouth’s seabed. 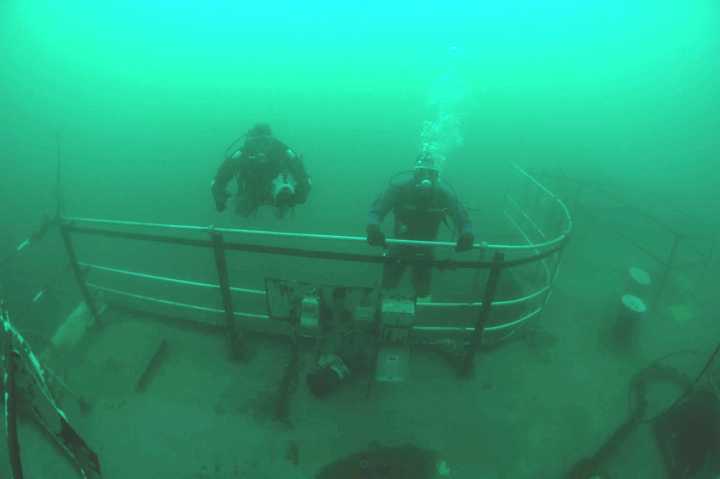 Thats me with the camera. ( photo Sally Sharrock ) 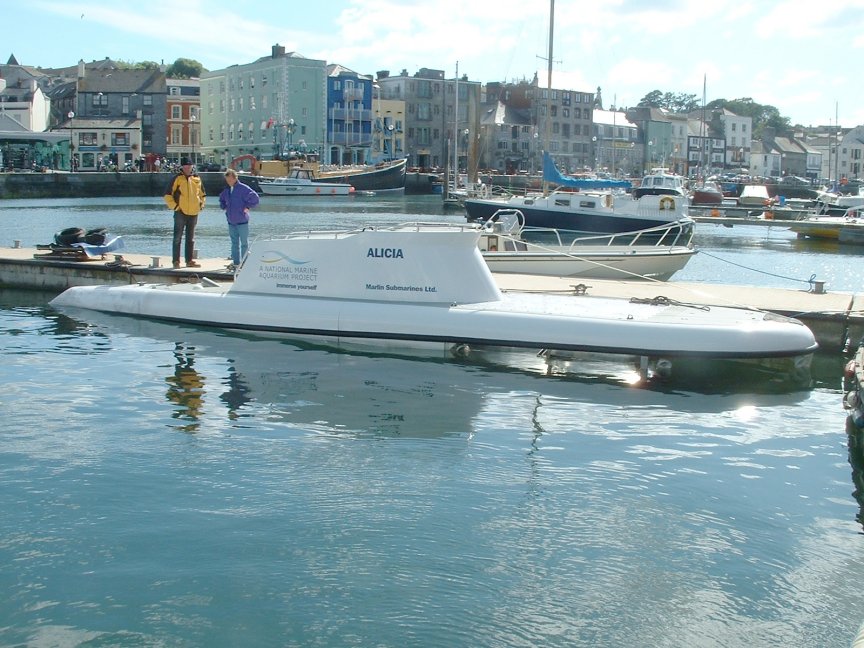 At first there was a lot of talk about getting people who couldn’t dive down to see the Scylla. To this end the National Marine Aquarium bought this small sub. Trouble was that the vis on the Scylla is not great at the best of times and there were issues of safety. Forinstance, would you have to stop all diving on the wreck whilst the sub was operating? Also it took ages for the sub to get around to the wreck, and so they decided to leave the sub there and transfer people by boat. With the low freeboard of the sub this was a tricky option.The idea had not really been thought through properly and in the end was abandoned. 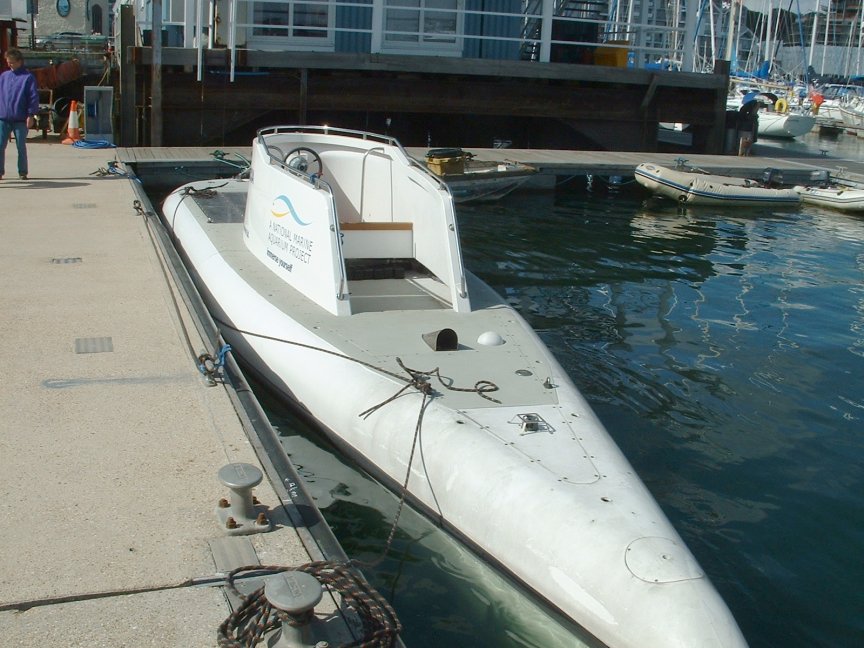 I am gratefull to Paul Hennessey for the photos below, showing the Scylla being built. 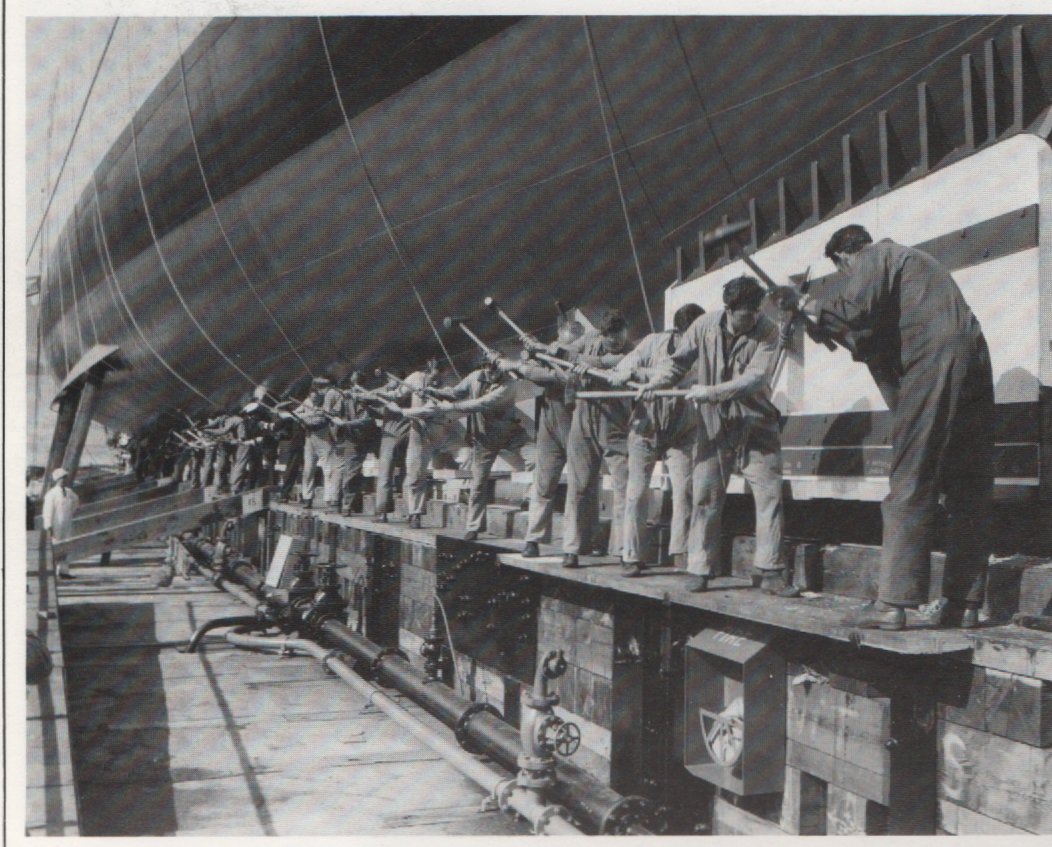 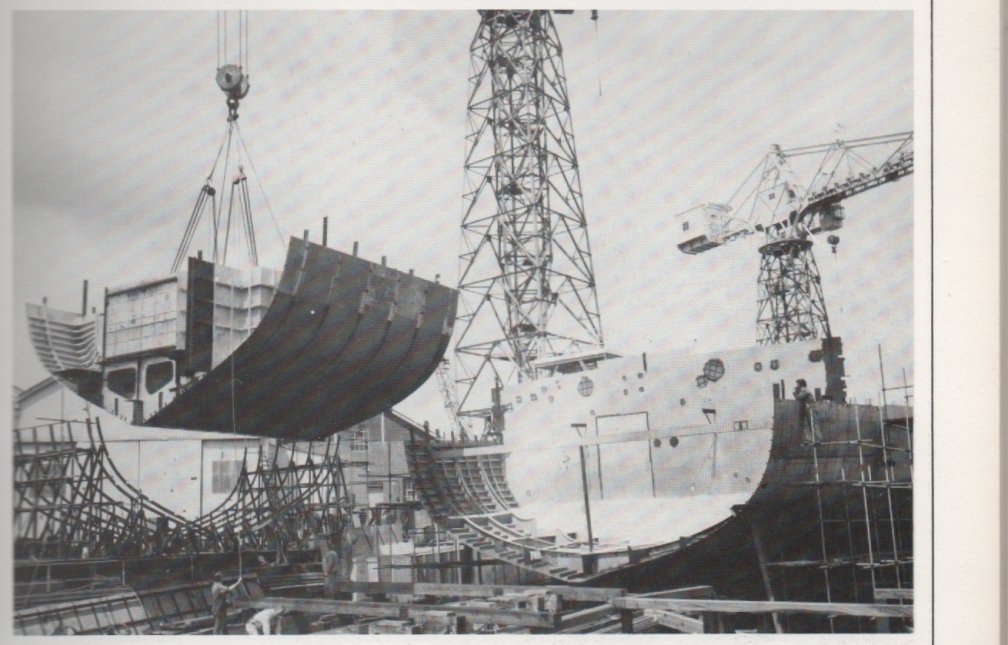 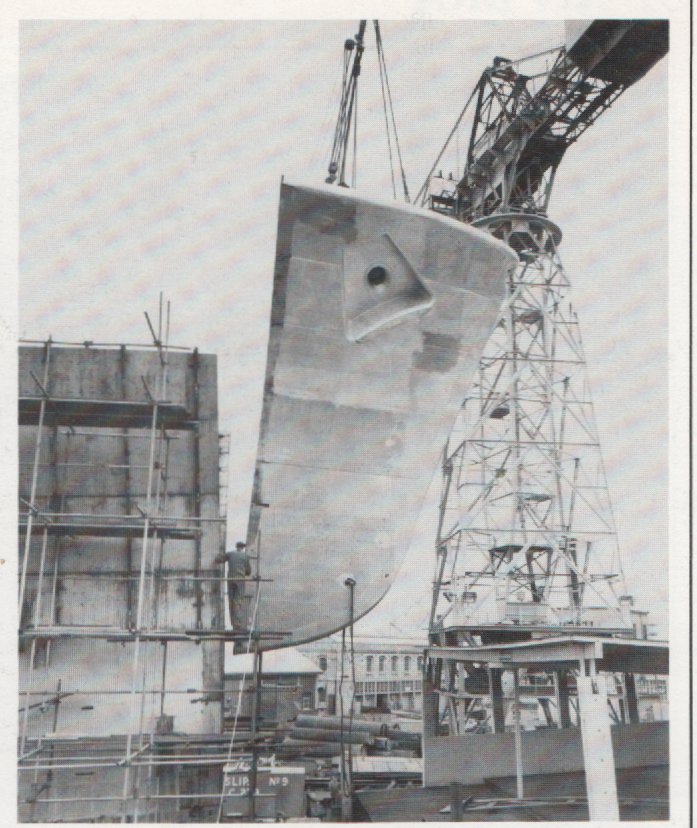