I suppose all of us go through phases with our favourite divesites, and at the moment one of my favourite dives is the Maine, wrecked just outside Salcombe. I first read about this wreck way back in the 1960’s when it was first discovered by the Torquay branch of the B.S.A.C. who later went on to recover its magnificent bronze prop. This was a tremendous achievement back in those days, and even now there are not many clubs that can match it. The Maine (she actually started lift as the Sierra Blanca) came to a sticky end on a misty day in March 1917, when a torpedo from a lurking U. boat hit her in the port side, round about her number two hold when she was about ten miles off Bolt Head. The Maine, a 3600-ton cargo ship, was loaded with horsehair, goatskins, and five hundred tons of chalk, outward bound from London to Philadelphia. Very soon the holds started to fill up and Captain Johnson, after sending off distress signals, set course for the nearest land in a vain attempt to beach her. 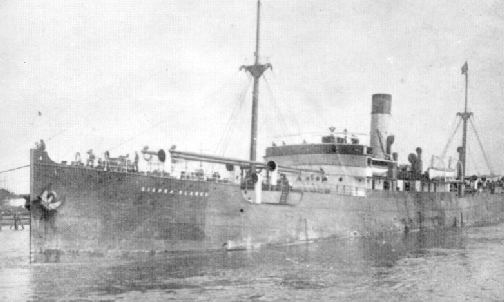 The Maine, formerly the Sierra Blanca.

The crew of forty-three must have been terrified that the U. boat would finish them off, but for some reason the U. boat never pressed home his attack. He was either very confident or just lost the Maine in the mist. In any event it did not really matter because that one torpedo was going to be enough to sink the Maine. As the miles drifted slowly by the Maine became more and more sluggish until the water level rose high enough to drown out the engines. As the Captain ordered the lifeboats swung down and prepared to abandon ship, the Royal Navy torpedo boat appeared out of the mist and soon took off most of the crew. Because Hope Cove was by now so close, the Captain of the torpedo boat offered to try and tow the stricken steamer to safety. However, by now the Maine was almost half full of water and the towropes kept parting under the terrible strain. After a while the main bulkheads collapsed, and the Maine sank slowly and gracefully to the bottom about two miles off Bolt Head. 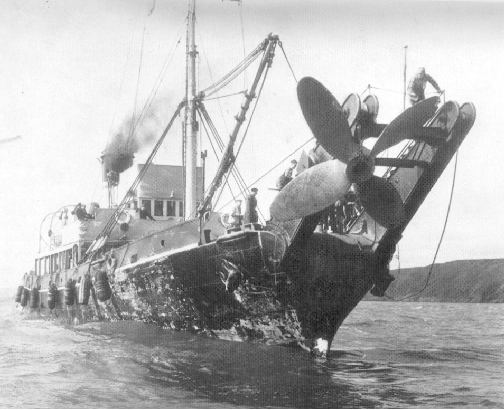 The Barbastel winches up the Maine’s bronze prop.

Nowadays the wreck lies upright on a bed of fine shale and sand in approximately 110 feet of water, and is not as well dived as she might be. This is largely due to the fierce tidal streams that run in this area, making it impossible to dive on the Maine except two hours after, or two hours before high water. Even then you only have about forty minutes before the tide starts turning so you have to get it right. The marks for the wreck are very good except for the fact that the Hamstone blends in very easily with the mainland in the background. Once you pick up the marks however you just cannot miss it. A lot of people thing that they have however, because they forget that the tide is now completely slack and so they sometimes have difficulty in ‘hooking’ the wreck in a small boat because the anchor tends to just go straight up and down. Still if you trust the marks you will be right in the middle. 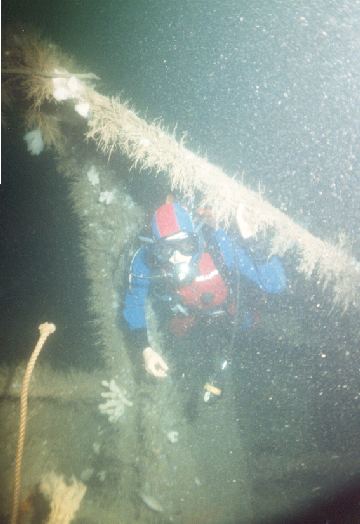 Swimming through the jumble of metal.

Underwater the Maine is a fantastic sight. Because of the sandy bottom and slack water, visibility is often thirty feet or more, and the sunlight bounces up from the seabed illuminating all the dark holes deep inside the wreck. You can swim down inside the holds and gently push your way through the shoals of pouting and pollack, then glance over the side of the hull through a myriad of fish to the seabed below. The boilers are massive, and on top of them are large round brass valves gleaming duly in the sunlight. Down by the side of the boilers is a jumble of metal that once was the engine room. You realise this when you look through some of the gaps and see large con rods with big brass bearings on them. As you make your way towards the bows, there are other smashed in holds to swim down into littered with scrap iron and broken railings. Small brass and copper fittings are to be found here as well, but they are all well fastened, and to be honest as soon as you see one your buddy usually distracts you by wildly waving in the direction of a better one, so it is often a case of coming up empty handed because you cannot make a decision about which bit to take off. 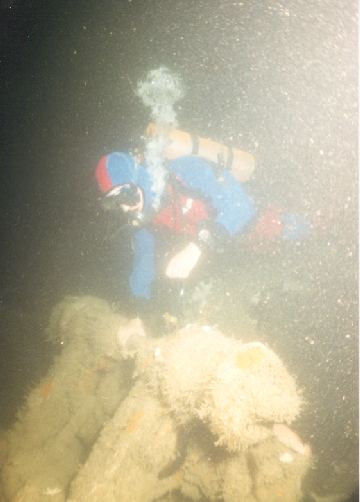 Part of a small winch.

Mind you, in a way that is all to the good. The Maine has probably survived in such good condition because of the simple fact that it is an awkward wreck to dive on because of the tides. Often, on a smashing summer’s day we have been the only boat on her. Still the Maine is one of the West Country’s ‘classic wrecks’, and if you get an opportunity to dive on her, take it, because her unspoilt condition cannot last forever.