As we have seen throughout this website the rocky coast of Devon has been the cause of hundreds of shipwrecks. So much so that many people cannot tell the wrecks from the rocks. If you take a stroll along almost any beach you will be able to turn up some piece, however small of a long forgotten wreck. But at Beacon point near Hope Cove you will come across the whole thing, the wreckage of the Empire Harry. Mind you , you will have to get there on a very low tide, and even then you will only get to see the boiler and other bits and pieces scattered scattered on the rocks and in the deep gullies. Still it is located on a beautiful sandy beach, near a nice pub, and on a sunny day the diving is a pure delight. 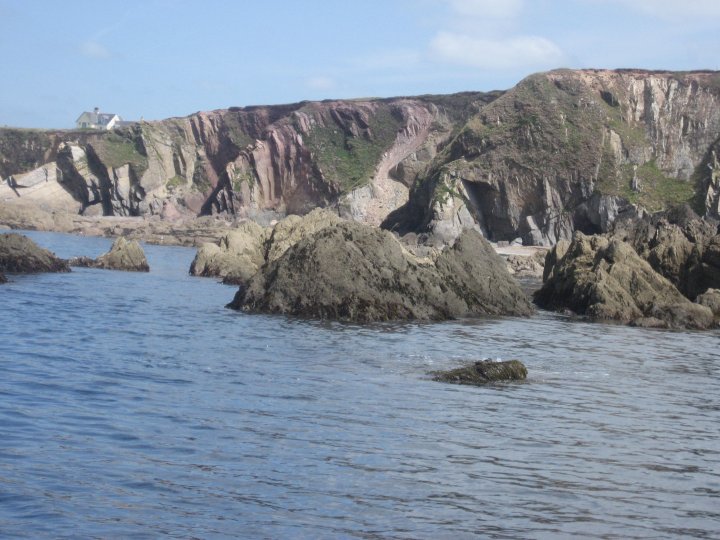 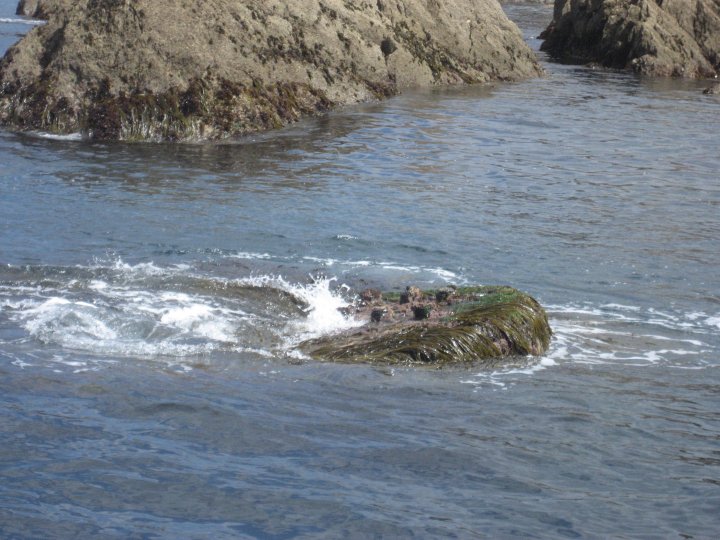 The Empire Harry was a deep sea tug of some 479 gross tonnage. Built in 1943 by the Goole Shipbuilding and Repair company, the Empire Harry was 136 feet long and about 30 feet in the beam. Although owned by the Ministry of War Transport, she was operated by the United Towing Company, and on the 6 of June 1945 she was towing two heavily laden lighters across Bigbury bay when she became caught up in a severe south westerly gale. With the two heavy lighters acting as a sort of reverse drogue, the tug could hardly make any seaway. So slowly at first, but then with increasing speed the Empire harry began to lose ground as the fierce winds started to blow her towards the shore. 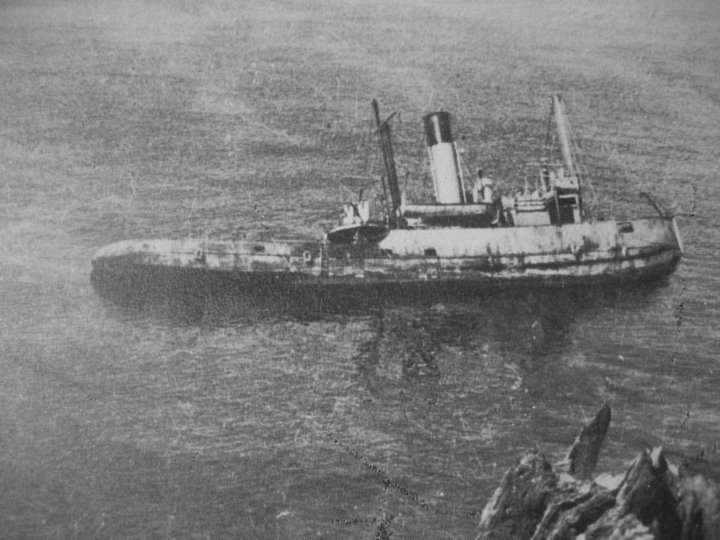 Empire Harry, mounting at the stern.

The nineteen men on board could see no way to escape. All they could do was hang on, and hope that the Lifeboat got to them before the coast did. In the event the coast won, and the Empire Harry struck the ridge of rocks that jut out from Beacon Point. Fortunately the Salcombe lifeboat got to the tug shortly after and successfully rescued all nineteen crew just in the nick of time as the two lighters were smashed to pieces and their contents were scattered underneath the cliffs from Warren Point to Hope Cove. Soon after the Empire Harry was declared a total loss and started to break up, and her wreckage joined that of the lighters underneath the cliffs. 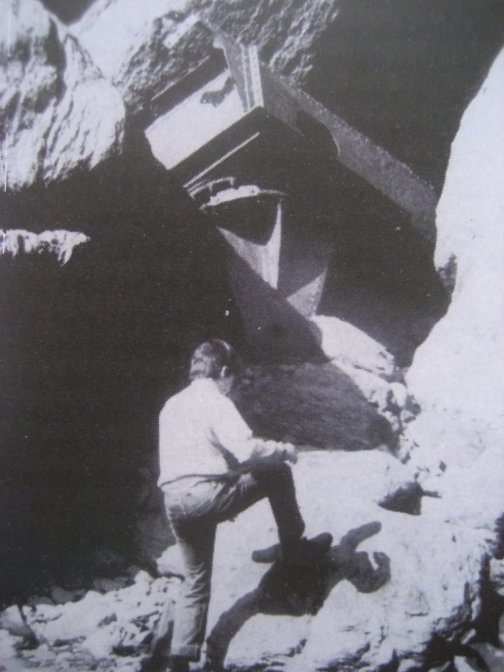 All those years ago.

I first stumbled upon this wreck with my young son Christopher nearly thirty years ago. We had taken a walk along the beach towards beacon point so he could try his luck at scrambling over the steep high rocks that surround the wreck. It is only a few hundred yards from the beach but it’s quite hard going and the first thing he found was the gun mounting turned upside down on the rocks. This caused me a bit of a stir as usually tugs are not armed, but this one was, with what seems to be a four inch or 4.5 inch gun. The gun was situated towards the rear of the tug, and I suppose that with the Second World War just ending they had not got around to dismantling it. 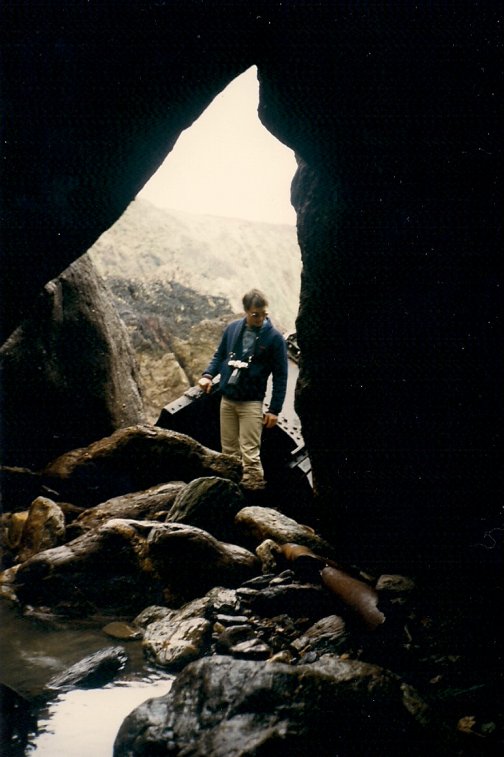 This is where the gun was buried for years.

All around were bits of metal, and inside a nearby cave, we could just make out the barrel of the gun almost buried in shingle and rocks. Over the next few years it became completely buried and lost from view and that the way I thought it would stay, until in 2010 mark —- sent me this great photo . He had been out walking during the early summer and stumbled upon the barrel which had been moved right out of the cave by the storms. When my son had found the mounting we both climbed up on top of it and I saw the remains of the boiler far out on the edge of the rocks. The gullies leading out from the beach to the boiler were full of bits of metal all smashed up and jammed in the rocks but bollards, pieces of scupper and parts of a winch are all quite recognisable. 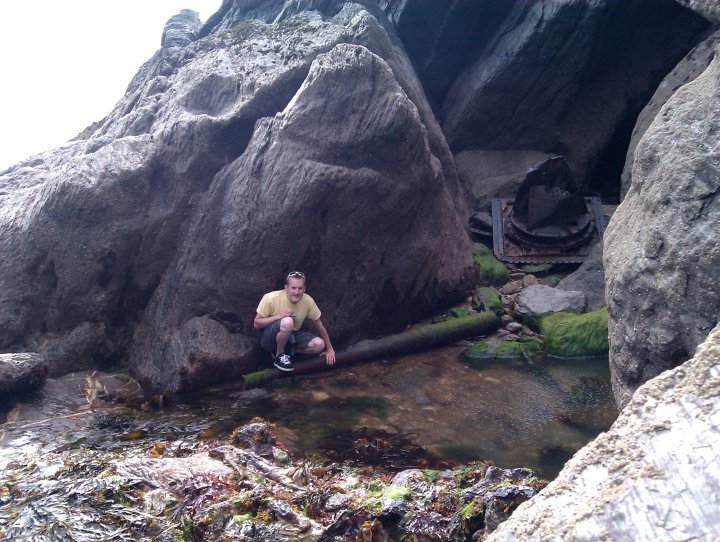 The storms have moved the gun out of the cave. Photo courtesy of Mark

I was going to describe this wreck as a shore dive, but after trying it once or twice, I must say it’s a bit too much like hard work. Anyway lugging a tank is really not necessary as a snorkel at low tide will suffice just as well. Entry from the beach is very easy and all you have to do is follow the rocks that lead out to the tip of Beacon Point. It is not a very long swim to the boiler, about 200 yards and if you get tired you can easily rest on the rocks. Wreckage is strewn in most of the gullies leading out to the boiler, largely consisting of the stern and pieces of the superstructure, these are smashed to small pieces now, but bollards, pieces of scupper and parts of a which are quite recognisable, as is the gun mounting which was situated at the aft end of the tug and is now wedged and stove in at the bottom of the cliffs. It seems surprising to think of a gun mounted on a tug, but then the Second World War had only just ended and I suppose that they had not got around to dismantling it. 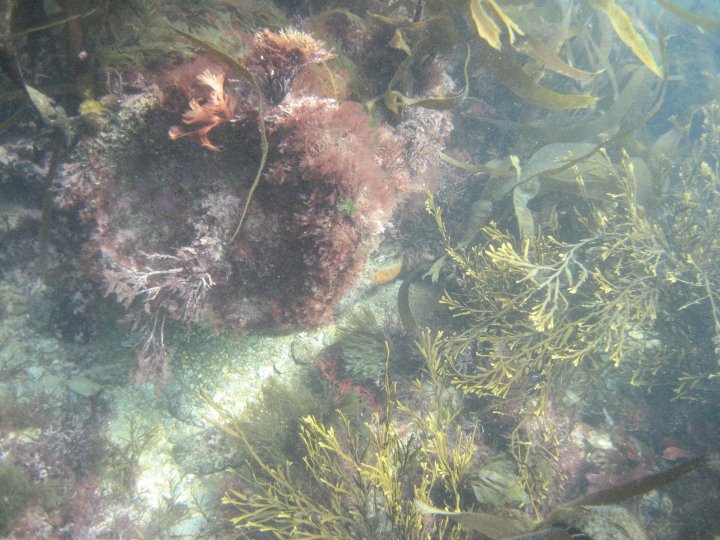 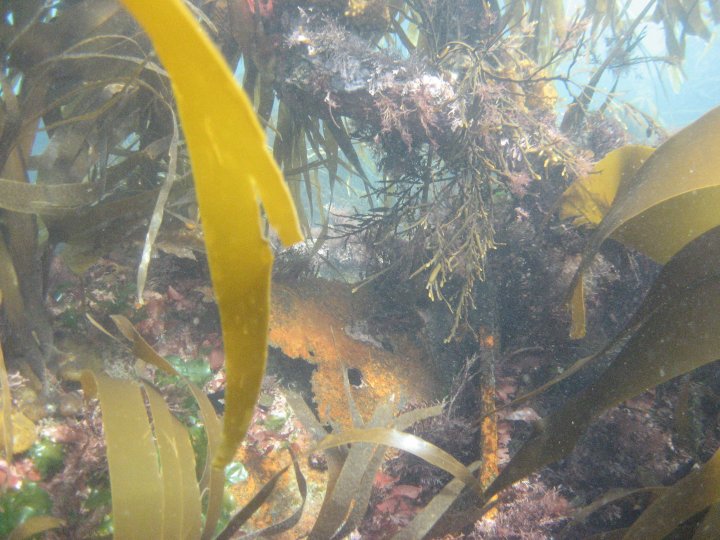 Out at the point the boiler sticks out of the water quite clearly at low tide and sits on the rest of the wreckage which lies in about 15 to 20 feet of clear water. At low tide you can get a bit of surge so it is often best to wait for mid tide. However, whichever way you decide, it is well worth while as the visibility is usually terrific. This part of the wreckage comprising mainly of ribs and bits of plate and pipe is extremely picturesque, and if you are keen to take underwater photo’s this is a very good wreck to begin on. If you are lazy and don’t fancy the walk and scramble over the rocks, then the boiler is only a five minute ride away by inflatable. You can easily launch a boat from any of the three beaches in Hope, but probably the old lifeboat slip is the best. 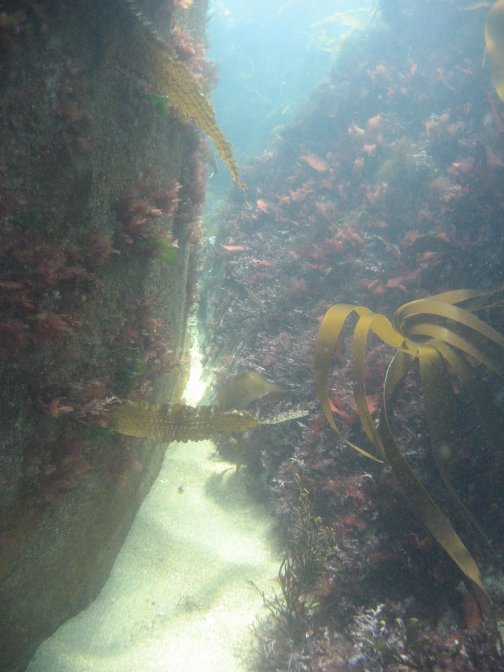 Boiler on the left.

So there it is, the wreck of the Empire Harry. Not one of the greatest dives, but certainly a pretty one. It’s easy to access at low tide so it makes it a wreck that all the family can enjoy, weather they are divers or not. With the acres of sandy beach surrounded by a genuine Devon fishing village,Ithink that your family will actually encourage you to go diving instead of moaning about it. 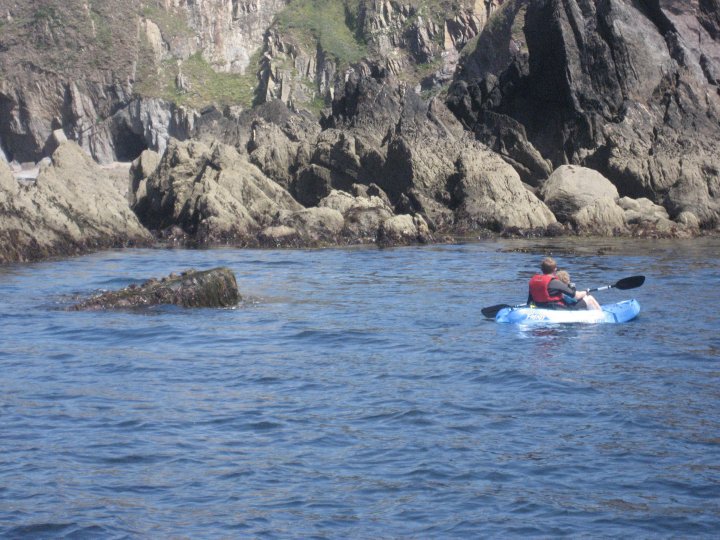 I am grateful to Peter Baldwin for the information and photos about his dad,John Baldwin, below. I have attached a group photo it is date stamped on the back June 1945. I have spoken with my Dad’s brother last week and he confirmed that this was other crew members of the Empire Harry My father is on the front row on the left. the chap with is hand on my Dad’s shoulder we believed is the man who threw a wooden ladder for him as he could not swim. Although he was in the water for short time he was treated in hospital for Hypothermia and frostbit to feet and fingers. The irony is that He lied about his age and towed Mulberry Harbours on D-Day and while his boat came under number of attacks it was not hit, then a month after the War ended his boat sinks!! I have also attached his discharge certificate as requested. 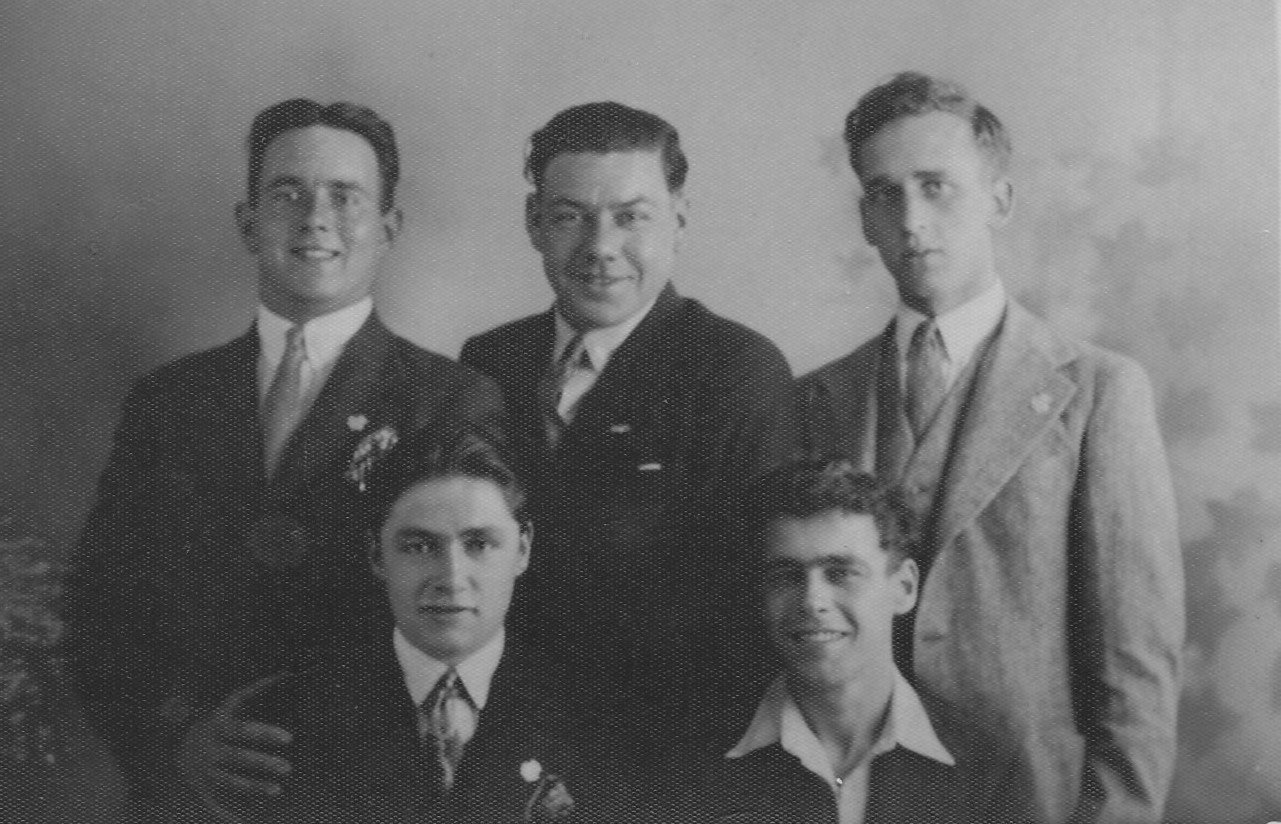 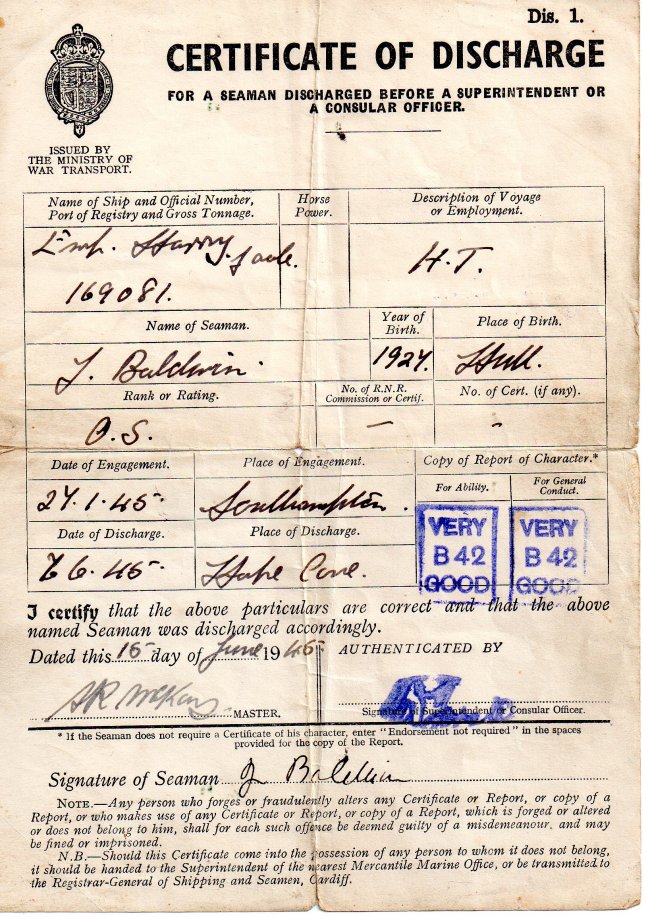