Sometimes you know, diving is just too much. You go out on an ordinary dive not expecting very much, and wallop, you find yourself swimming over a wreck that you had no idea existed. We had gone out to the Eddystone one evening in early spring. As we had about an hour before dark we decided to anchor close by the rocks near the Eddystone Lighthouse and just have a quick look see. As we swam down the reef through a silver shower of sand eels I saw before me the unmistakable outline of a ship’s boiler. I could hardly believe it. Later I found out that this was part of the wreckage from a ship called the Hiogo, and the reason why it is not very well known is because in the summer, when most diverse visit the reef, the kelp completely hides it. But it is there all right, and in its day the wreck of the Hiogo became a very popular tourist attraction with boatloads of holidaymakers being ferried out to view its sad remains stuck fast on the ‘notorious Eddystone reef’. So how did it get there? 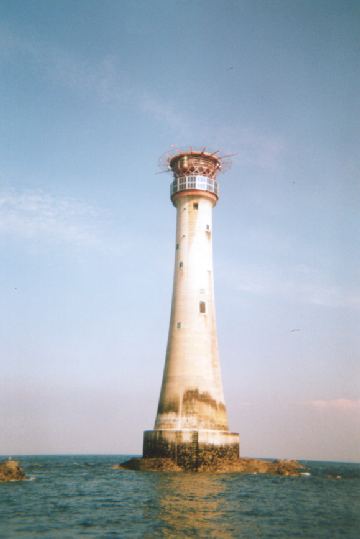 Well the Hiogo was a barque rigged screw steamer of some five hundred tons on her maiden voyage from London to Japan. Manned by a crew of twenty-seven, the Hiogo carried a valuable general cargo, some passengers and two boxes of specie worth over twenty thousand pounds. On leaving the Port of London the Hiogo proceeded down the Channel bounds for Falmouth where she was to take on more passengers. The weather was exceedingly rough with the steamer pushing into a strong headwind. However the Hiogo was able to press on at a good speed, and all on board marvelled at how well she performed. At midnight on 2nd October 1867 they were off Start Point and Captain Bainton retired below leaving the Second Officer in command. 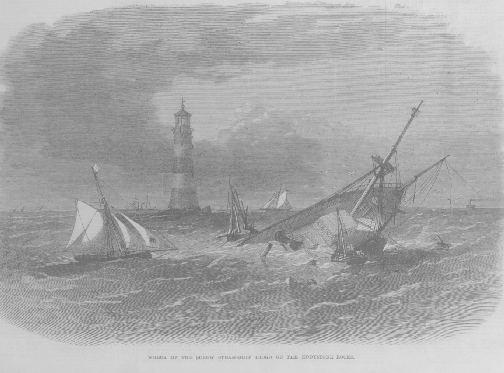 Fresh in from the London Illustrated News.

By now the weather had moderated somewhat and visibility was very good. Soon the Eddystone Lighthouse came into view and the Second Officer sent down to the Captain for a change of course. For some unaccountable reason Captain Bainton refused to order any, and whatsmore could not be persuaded to come up on deck. As the Hiogo sped towards the Eddystone reef the Second Officer repeatedly implored the Captain to order a change of course, but Captain Bainton would have none of it. The situation was incredible. The Captain steadfast in his refusal to change course, and the Second Officer, with less than five hundred yards to go, was too frightened of disobeying his Captain to give the order himself. The inevitable outcome was five hundred tons of finely built ship colliding with the Eddystone rocks at a speed of over ten knots.

The bottom was ripped out and the steamer ground to a halt hard and fast on the Sugar Loaf rock at the north eastern edge of the reef. Immediately the engine was flung into reverse but thankfully nothing happened. If the Hiogo had managed to get off the rocks, the huge dents in her hull would have sent her plunging into almost a hundred feet of water and would have most probably drowned everybody. As it was nobody was really hurt, but inside the ship all was confusion. Chandeliers had crashed down inside the cabins and all the furniture and fittings had been completely smashed up. After the first shock had passed distress rockets were set up and paraffin lanterns lit. But the Coastguard saw none of this, and knew nothing about the wrecking until the passengers and crew were safely landed at Plymouth by a Pilot boat who had seen the flares whilst returning to Plymouth. With all the passengers and crew safe, attention was focused on the Hiogo’s cargo, especially the twenty thousand pounds worth of specie. Unfortunately for all us divers, the specie was quickly recovered but the cargo was ruined. So too was the Hiogo. Her position was so obviously hopeless that no salvage attempt was made and soon she completely broke up. In the ensuing Board of Enquiry some very harsh things were said, and the Captain and his Second Officer had their certificates suspended for twelve months. 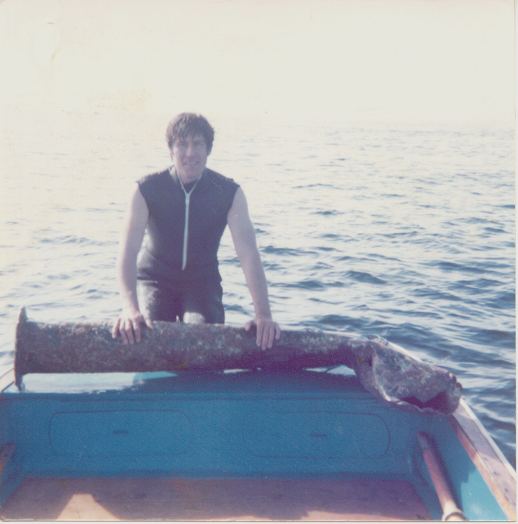 One of the many boiler pipes raised from the Hiogo.

Nowadays the Hiogo’s remains lie in forty-five feet of water on a natural plateau in the reef. As I have said before, to see the wreck properly you should visit in the winter or early spring, as come the summer the kelp becomes so thick that I doubt if you will be able to find it. Still there is a lot there, the main items being the two boilers and the rest of the engine room. You can get right inside one of the boilers, crawl around underneath the other, and hack away at some of the brass con rods in the engine room. Outside this main area are a lot of iron ribs and plating scattered about, but the stern part of the ship must be in deeper water and is I suspect further along the reef (more on this in a later article).

The fish life is superb. Everything that the Eddystone is famous for seems to hang around the wreck in shoals, but surprisingly the most exciting things are not the fish but the birds. The area around the Hiogo absolutely abounds with sand eels, young pollock and mackerel, and the Gannets repeatedly dive-bomb right below the surface in order to spear their fish. It is really fascinating to watch the way they fold their wings at the point of impact.

One word of warning. The Hiogo should only be dived on at slack water. But the Eddystone as far as currents are concerned, is a law unto itself and the Hiogo is situated right in the middle of a sort of rocky funnel and seems to set up its own small current system. When water all around is slack, over the wreck it is running almost at the flood. You can see this quite plainly in the form of a localised tide rip on the surface. All you have to do is wait for this to disappear, and then you are free to dive. I hope you find it worth the wait, I know I did.