All along South Devon, the coast is dotted with various outcrops of rock called ‘Mewstones’, and because they invariably stand at the entrance to busy ports or harbours, each one seems to have its own crop of shipwrecks. The pair of Mewstones standing guard outside the entrance to Salcombe Harbour are no exception, and since they lie in the middle of a particularly notorious stretch of coastline, (Bolt Tail to Prawle Point) it is remarkable that many more ships have not been smashed to pieces on their uncompromising rocks.

The Liberta hard aground on the rocks.

In 1926 however, on a foggy February Sunday evening, the Mewstone was about to claim its first victim for some years, the Italian steamer Liberta. The Liberta, a 375 foot steamer of some 4073 tons had been built by Barclay Curle of Glasgow in 1900 as the Vermont, and was on her way from Spezia to Rotterdam in ballast. The intention of her master, Capt. Achille Moscatillii was to pick up a cargo of coal and return to Italy. Unfortunately for him he ran foul of the English Channel’s weather, and ended up blundering along the coast of Devon completely lost. On Sunday, February 14th, Capt. Moscatillii not only had fog to contend with, but a southwesterly gale that blew his ship unerringly towards the rocky coast near Salcombe. In an effort to fix his position in the dense fog the crew took frequent soundings, and since these showed a consistent depth of over twenty fathoms, they assumed that all was well and that they were well south of where they actually were. 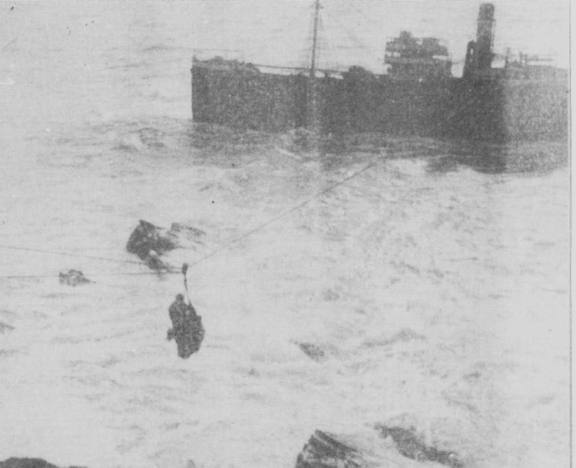 Some of the crew being rescued.

Whilst they were all no doubt congratulating themselves on their good fortune the Liberta quietly ran aground, passing inside the Little Mewstone and the shore, ending up stuck between both Mewstones. There was very little panic as the grounding had been quite gentle, however the problem was where on earth were they? The Captain sent out a distress call on his radio and also sounded his siren in long mournful blasts. The crew waited patiently. Soon the wind started to blow more fiercely, the rain lashed down in sheets, and the sea, whipped up by the now gale force winds, funnelled in through the Mewstones, the waves breaking right over the Liberta’s deck. The Italian crew began to become increasingly uneasy. Luckily the Liberta’s distress call had been picked up by a ‘ham’ radio enthusiast at South Sands, and although he could not pinpoint the exact location, he telephoned the Coastguard at Prawle Point who decided that the wreck must be near Bolt Head.

They immediately phoned the Hope Cove lifeboat which launched in truly awful conditions, and took over four hours to row the five miles to Bolt Head in the pitch dark, arriving just before dawn. Meanwhile other radio stations had picked up the Liberta’s signals and decided that the strickened vessel was really off Start Point, so the Torbay lifeboat was launched as well. Fortunately this one was motorised, and the coxn, finding no wreck off the Start used his common sense and continued on past Prawle Point and on to Bolt Head. It was just as well, because by now the Hope Cove lifeboatmen were exhausted, and in the first pale light of dawn it was obvious that they had no hope of getting anywhere near the wreck as she was jammed on a large rock, and as each wave washed over her she plunged up and down like a giant see-saw. As the fog lifted the Torbay lifeboat hove into view, and the two coxn decided to wait until the light got better so they could properly assess the situation. By now the steamers crew could just make out the two lifeboats, and feeling that they were going to be abandoned, they started to fire off distress rockets and called despairingly to the lifeboatmen for help. 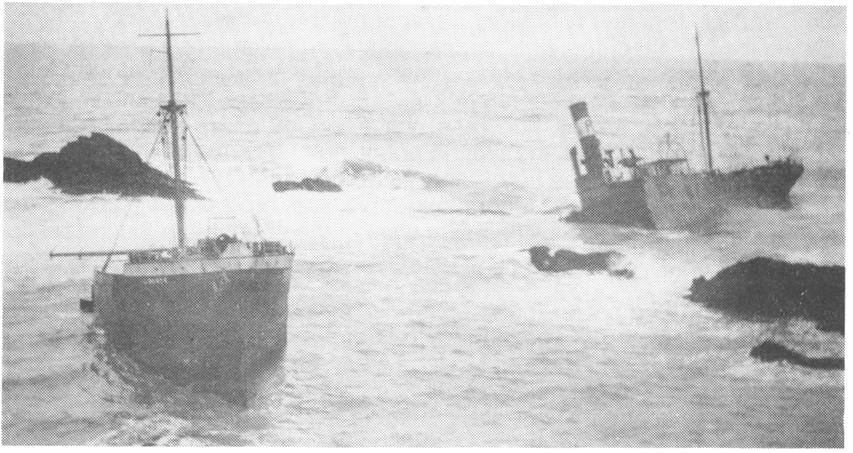 The Liberta split in two.

The Torbay boat, at some considerable risk moved in very close to the wreck and tried to reassure the crewmen. This however just made them more panicky, and in the end a buoy and line was rigged between the two vessels. With great difficulty three men were dragged off the deck of the Liberta, through the heaving sea to the comparative safety of the lifeboat. The rest of the crew, horrified at the dangers involved, thankfully turned for their salvation to the Hope Cove Rocket Apparatus Team which conveniently turned up in the nick of time and rigged a breeches buoy from the clifftop to the deck of the Liberta. Not only did they rescue all the remaining crew, they also managed to save the ships cat and dog as well.

Four days later the Liberta broke in half, and very shortly afterwards she disappeared beneath the waves forever. Today the Liberta lies more or less exactly where she sank all those years ago. The area between the two Mewstones and the shore is a nightmare of treacherous rocks and violent currents, but if you wait for a calm day, slack water, and preferably low tide (so that you can see all those rocks that would otherwise be hidden), you can just sail straight into the middle of all those rocks and drop anchor. You will hook immediately because you will be right in the middle of the Liberta’s bow section.