The Persier, originally built in 1918 as the War Buffalo, was a World War British Standard B class ship of 5,030 tons. She was built in Newcastle by the Northumberland Shipbuilding Co., and on her completion in 1919 she was sold to the Belgium Maritime Co., and renamed the Persier. She traded allover the world and took part in the Dunkirk evacuations during 1940. In that same year she was bombed whilst anchored near Oban. Thankfully the bombs missed the Persier, but the explosions did some damage to her hull, a fact which unfortunately went unoticed at the time. Sailing in convoy on her way back from Baltimore, heavily loaded with steel and dismantled vehicles, she began to leak. As the leaks became more serious, she was forced to stop several times to seal them.

The Persia in happier times.

Hampered by snow and the icy fog that prevailed in the Atlantic during that February of 1941, she started to fall behind the convoy until she was left all alone. As the weather worsened, her cargo shifted and a huge wave brought down the foremast, which smashed open No.2hatch. Immediately water started to pour in, and as she staggered from wavetop to wavetop her steering system broke down, closely followed by her electrical system. With most of the lifeboats smashed, and water pouring into her, it was with something like relief that the ” Persier finally went aground near Halvidru, on the coast of Iceland.

For fourteen months she lay stranded in Iceland whilst salvage experts worked to get her reasonably seaworthy. At last in May 1942, she was towed back to England and putin dry dock for further repairs. Early in 1943 the Persier was back in service, but after only five voyages she was designated to be sunk as a blockship on the Normandy beaches. As is usual in these cases, a change of orders came only after the Persier had been stripped of all her fittings, and great holes cut in her to facilitate her sinking. However, all this was put to rights, and on the 8 February, 1945 the Persier set sail from Cardiff with sixty-three people on board in convoy BTC 65. 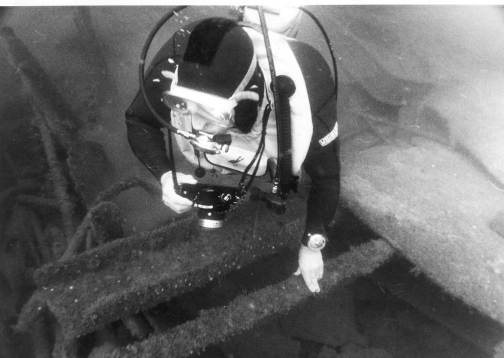 Some of this wreck is just a great scrapheap.

Because of the rough weather, the convoy was forced to shelter at Lundy, and then Clovelly. By 11 February (not the Persier’s best month) the convoy was at the Eddystone, right in the middle of the U boat’s favourite killing ground. A lookout saw the periscope, but he was too late. The torpedoes were already running. The first prematurely exploded in front of her ,and the second narrowly missed her stem. But the Persier’s luck had run out. At5.25pm the third torpedo exploded in No.2 hold, and she started to list heavily. The Captain stopped the engines and ordered the boats to be lowered. On his inspection he found that the frontholds were completely flooded, so he ordered the ship to be abandoned.As the bows started to sink the stern rose, and a defective steam valve restarted the engines.

Most of the lifeboats, by now full of people, had clustered about the stem and so were chopped to pieces by the Persier’s spinning propeller. The Persier slowly moved away from the ensuing chaos, leaving the remnants of her crew marooned onboard.The escort vessels, seeing their plight soon closed with the Persier, whose engines had by now stopped. This happy state of affairs was short lived however, because of HMS Cornellium dropping depth charges in the near vicinity. The shock waves again starred the Persier’s engines, and off she went again, slowly sinking by the bows. The escort vessels managed to get the rest of the crew off, and left the Persier slowly steaming towards her fate. When the morning arrived she was nowhere to be seen, and was listed as “torpedoed and sunk off the Eddystone”. 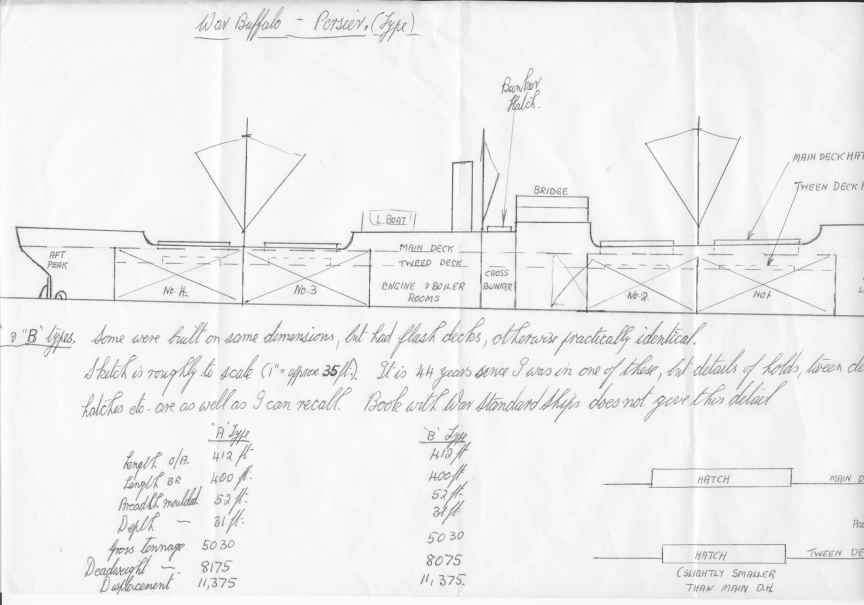 Diagram of the War Buffalo drawn by Wilf Dodds who seved on these types of ship.

The records stayed like that until 1969,.when a fisherman using an echo sounder, and his nets, found a large wreck in Bigbury Bay. After some exploratory dives the ship’s bell was brought up, and on it was the name ‘War Buffalo’. So, gradually sinking, but with her engines still slowly running, the Persier had staggered towards the coast. Maybe she remembered that other February night, when again full of water she had struggled to reach the Icelandic coast. This time however, she foundered long before she reached the safety of the shore, and since there was to be no reprieve, Bigbury Bay became the Persier’s final resting place.

Now a days the wreck of the Persier or War Buffalo, call her what you will, has become one of the West Countries best known dive sites. The Persier lies fairly upright on a sandy bottom in about 96 feet of water. She lies roughly north to south, with a large rocky reef about 25 yards to the west of her. The bows and srem are in fairly good shape, but the midships section is a bit of a shambles. This is most probably due to periodic scrapping, and the severe storms of the past couple of winters. The visibility is usually about 15 to 20 feet, and the first thing that you notice are the fish. The wreck is absolutely teeming with them, and they all seem to be a good deal bigger than anywhere else. The bows section appears huge, stretching up and away from you. As you swim over it you see large expanses of steel decking disappearing into the gloom. Finning along this steel plain, pushing through the shoals of fish you arrive at two massive boilers. As you start to examine these yourealise that 15 feet below you is another exposed deck level with all sorts of interesting holes to explore. Further aft the steel plate gives way to large areas of twisted and jumbled girders. All in all it’s a very good dive, and there’s still lots to see. But, with a bottom time only about twenty minutes, you have hardly got time to get your bearings. This most probably accounts for the Persier’s popularity. It’s a very impressive wreck, but it needs several dives to appreciate it fully.