The Deventia was a coastal trader typical of the hundreds that plied their trade all around our coasts in the early part of the 20th Century. On 12th of February 1929 the Deventia was carrying a shipment of soda from Fleetwood to the Port of London when she got caught out in an east-south-east gale, which blew her onto the rocks near Soar Mill Cove, between Bolt Head and Bolt Tail. 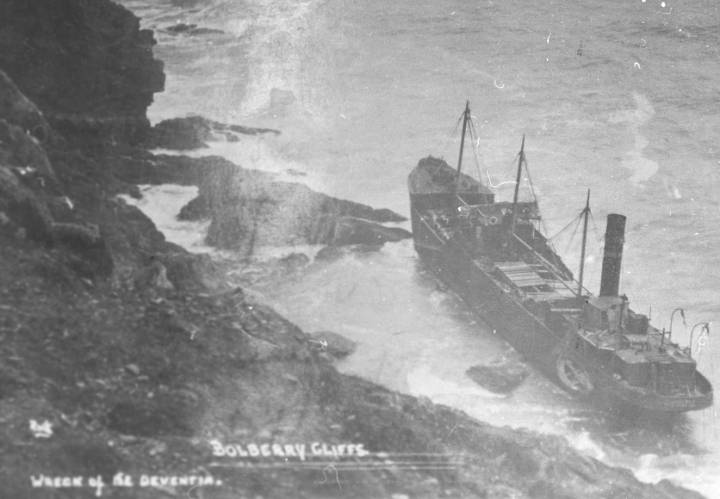 At the time there was no lifeboat stationed at Salcombe, so the Plymouth Lifeboat had to battle in the teeth of the gale for over two and a half hours before she managed to get into the lee of the Deventia’s stricken hull. Ten of the crew managed to jump into the lifeboat before she was forced away by the howling sea, and by that time the Coast Guard had arrived with its rocket apparatus, with which they managed to rescue the other three very frightened men.

Interview with the Captain

In an interview Russell Kelly said:- “We left Fleetwood about midnight on Saturday and as we were rounding Lands End on Monday morning the conditions were almost summer-like, the sun being warm, visibility good, and sea fairly smooth. Our crew were made up of the skipper, captain Kelly, who is my uncle, four Tynesiders, two Welshmen, one Irishman, a Shetlander, A Cornishman, two Fleetwood men and myself. About four o’clock in the afternoon the wind suddenly turned round and we ran into a thick snowstorm within half an hour, finally running aground into sand below the rocks of Bolt Head. We quickly got the life-boat ready and sent flares out, and our signals were soon answered. Our position, however, was very difficult, being underneath some huge, ice-covered rocks, and some hours went by before we were landed. Three of us went with the rocket apparatus (the breeches) and the other ten with the life-boat. Owing to the storm and bad visibility they could only lift us on the rocks half-way, and when I found myself on a rock I found that my line had been fouled and I was stranded. I picked my way cautiously in the dark, scrambled up the rocks in my bare feet to the top and gave them the position of the others. I left my sea boots in the boat, but had another pair round my neck. I badly scratched my feet, but naturally I didn’t give them a thought at the time. We were then taken by the coastguard to Hope Cove and given a good feed.” 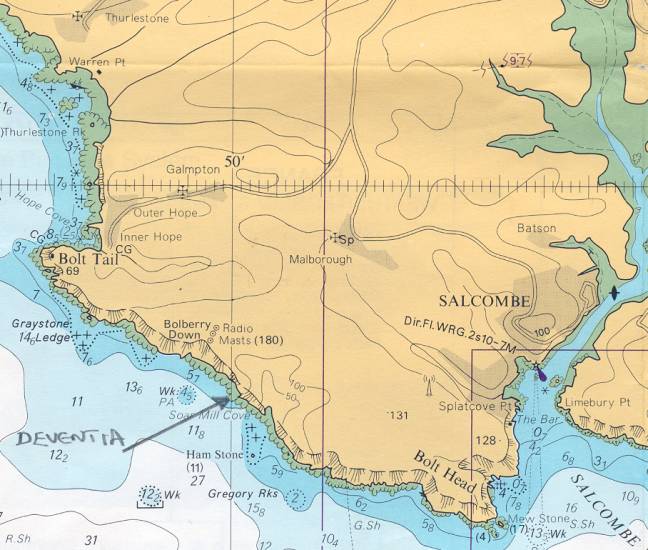 The Deventia was soon refloated, but was found to be not worth repairing, and was scrapped where she lay. As it happened they left quite a bit behind mouldering on the bottom hard up against the cliffs. 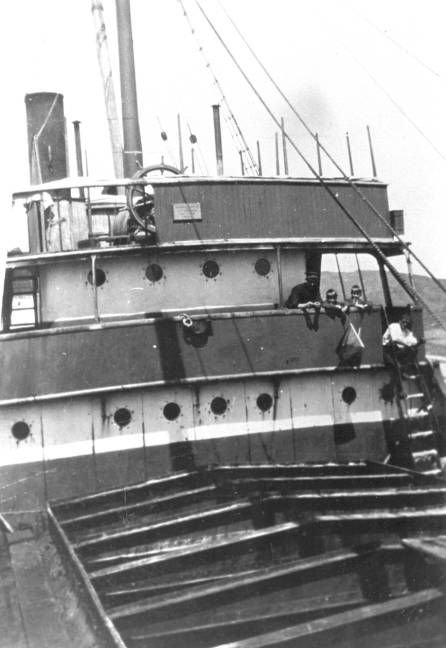 My friends and I found this wreck by accident whilst we were looking for the remains of the ‘Dragon’ a British East Indiaman wrecked near here in 1757. At first all that was visible was a couple of feet from the top of an engine block. As the years progressed however, more and more sand got washed away revealing propellers, decking, ribs and much other scrap plating, all in fifteen feet of water. Further out we found an anchor, more ribs and other bits and pieces including some nice lumps of brass. 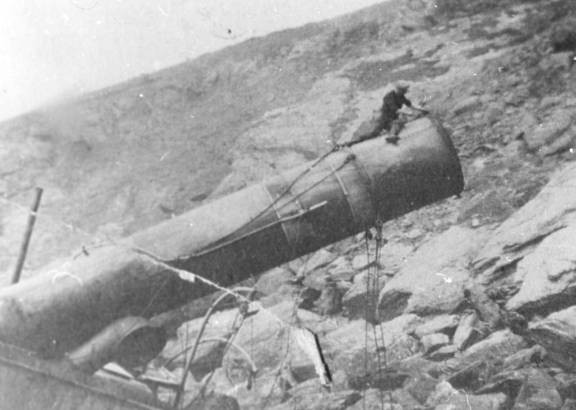 Can’t quite make out makers plate.

The star attraction however was about twelve feet of prop shaft encased in its bronze bearings. Because they were regularly polished by the sand coming in and out with the tide you needed sunglasses inside your mask to protect your from the glare. Over the next two years we happily visited and filmed the Deventia wreck site. The water was usually gin clear with a mass of fish poking in and out of the wrecks entrails. It really was a most beautiful wreck. But then it started to slowly become buried by the sand, washing back in during the winter storms. In 2000, as the century turned it completely disappeared, all except a small piece from an iron propeller blade, sticking up like a forlorn finger. 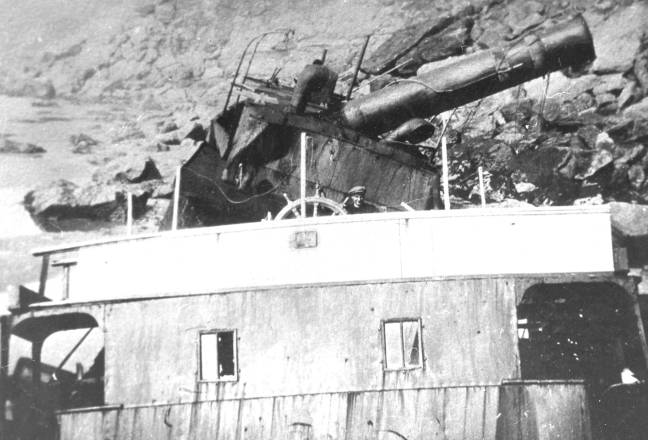 Can’t quite make out makers plate.

So far there has been no resurrection, but who knows. Watch this space.

By the way, the black and white photos of the Deventia and lots of help in identifying her was given by Malcolm Darch, who besides being very good local historian, also makes his living by making incredibly beautiful scale models of ships for museums and corporate clients.

View video stills of the Deventia